Gaming headsets mean different things to different people. For some, the best gaming headset means being able to hear enemy footsteps from half the way across the map; for others, it means something that is capable of outputting high-quality dynamic audio across all frequencies. Still, there’s one thing that almost anyone can get behind, and that’s an extensive feature list. This is what XPG’s Precog Gaming Headset offers: a long list of features to suit all needs.

Unfortunately, an extensive feature list must always come at a cost. This usually means a reduction in sound quality or cheaper build quality within a budget, or an increase in price. XPG’s Precog scores pretty well on its build quality, but suffers on sound quality and price, if only by a little. This detachable, durable, dynamic, dual-driver headset is currently being sold for $115 (£119) on Amazon.

Its original MSRP was set at a pretty steep $200, pitting it against high-end wireless rivals like the Sennheiser GSP 370 Wireless gaming headset – a battle I’m not sure it would win. Now, however, its price has been reduced to $130 on the official store, and even less than this if you buy it from Amazon. This makes the Precog much more competitive, and potentially worth the price for its feature list.

The Precog gives you everything from USB type-C connectivity to an easily adjustable headband for comfort. Really, the only thing it’s lacking is wireless connectivity.

So, apart from wireless connectivity, you get a hell of a lot to go along with this headset’s dual drivers.

All of this comes in the form of a rather professional-looking black and red headset. It is fairly hefty, however, sitting somewhere between ‘treadmill wear’ and ‘nightclub DJ.’ Its chunky ear cups are accented by aluminium with a dark electroplating finish. The red XPG logo splashes across the centre of both ear cups, and there is a subtle red thread lining the auto-adjustable headband. Its ear cups can also light up red, providing you’re connected via USB. Above all this, two bendy bars extend and curve from one ear cup to the other, framing the headset.

It doesn’t look bad, but its solid build quality does betray a look that, in parts, seems a little cheap. Although the ear cups are aluminium with an electroplating finish, it feels less like aluminium and more like plastic, somewhat detracting from its high-quality image.

In terms of comfort, XPG’s Precog Gaming Headset scores highly. I’ve worn this headset almost every day for over a week now and suffered no discomfort. It has soft padding around the ear cups, which sit over your ears rather than on them. The auto-adjustable headband also helps – cue a flashback to blissful days once upon a time with my Steelseries Siberia V2 headset.

The Precog’s main brag on the specification front is its set of dynamic/electrostatic dual drivers. Underneath its shiny black and red exterior, this headset hosts not one, but two sets of drivers. The 40mm dynamic neodymium drivers give you a nice wide sound with plenty of bass response, whereas the electrostatic drivers focus on the treble. By working together, these dual drivers give the Precog headset a frequency response range of 5 – 50,000Hz. 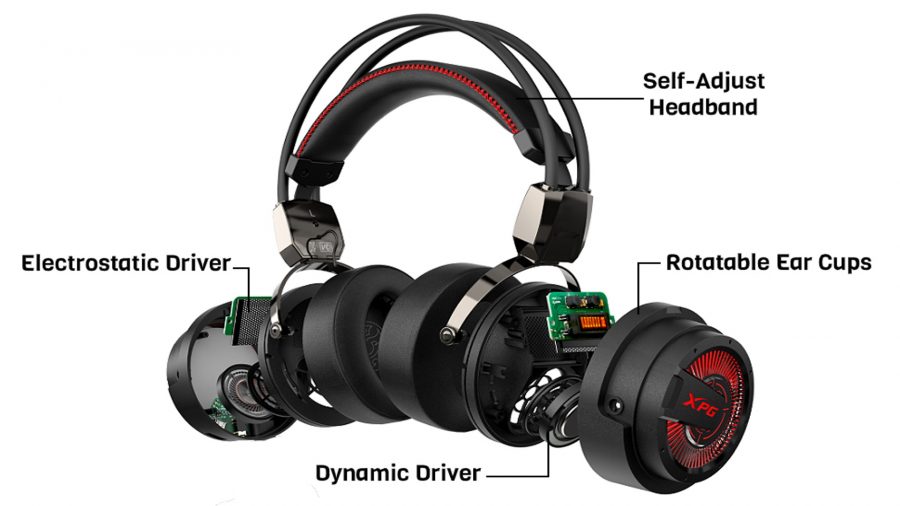 Considering the emphasis XPG has placed on this headset’s closed-back dual dynamic/electrostatic drivers, its sound quality is a little disappointing. Only a little, though, and it’s probably still well worth the price considering its extensive feature list. But, I’m not going to lie, I was hoping for a little better.

This headset suffers from what most gaming headsets suffer: an overpowering bass response. It is far from the worst offender on this front, however, and its electrostatic drivers help balance out the soundscape with some pretty well-defined treble. It is definitely an issue, though. Gaming headsets will continue to be bass-heavy for as long as gamers keep thinking more bass is better.

It does have a wide and full soundscape, immersing you in whatever song, movie, or game you’re listening to and handling all frequencies without distortion, but if you’re looking for crystal clear separation between different frequencies and instruments, you’ll probably be disappointed. The Precog does sound great, don’t get me wrong, but it sacrifices clarity and distinctness – especially, surprisingly, at the higher frequencies – for this full-bodied loud and immersive sound.

This was especially clear when I compared the XPG Precog to a headset under half its price, my $44 HyperX Cloud Stinger. I found that the Stinger had a much better separation between sounds at different frequencies, and this left the audio sounding much less muddy. 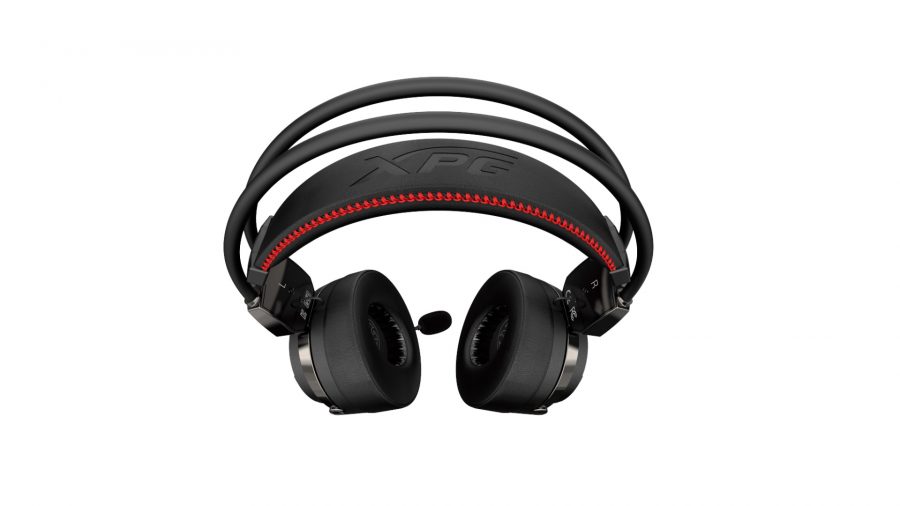 Feature-wise, it offers three separate sound modes through the use of its dual electrostatic and dynamic drivers, and you can select from the three by flicking a switch on the headset’s inline controller. ‘7.1’ mode gives you virtual surround-sound, ‘Music’ mode gives you a full and wide sound and is the setting that will be used in most scenarios, and ‘FPS’ mode cuts out most of the low frequencies to make footsteps easier to hear in game.

Oh yeah, and did I mention that these things can go loud? I mean really, really loud. It’s probably best to keep the volume down low when you first hit play wearing these.

The XPG Precog’s mic quality also resides in the realm of ‘pretty good, but could be better.’ As far as gaming headset mics go it’s better than average, and the Environmental Noise Cancelling (ENC) works rather well. However, I noticed a slight high-pitched ringing in my test recording, and while it wasn’t enough to annoy me, I didn’t have to listen to it non-stop for a few hours over team chat.

I’ve already mentioned this headset’s first issue, this being its mic’s high-pitched ringing. There was one other issue that I noticed, though, which is that volume adjustments proved to be quite buggy on occasion.

A few inches down the USB cable is a small controller hub, home to a few switches and dials. From this hub you can:

The cable itself is thinly braided, and while it doesn’t feel as sturdy as some others that we’ve seen, it is much more durable than a non-braided cable. It also comes with a USB-C to USB extension cord, providing some much needed extra length since the USB-C cable itself is pretty short.

When you’re plugged into a Windows PC via USB, adjusting the volume through the headset’s inline audio controls adjusts the volume in Windows. Sometimes this works smoothly, but at other times Windows shows the volume stuttering up or down in quite a janky fashion, moving up and down rapidly between two volume values.

XPG’s Precog Gaming Headset is quite the steal at its lower price, providing you actually want all of the features it offers. I imagine this headset will be useful for those travelling to LAN parties, for example, as they will be able to make good use of its carry case and its general durability, as well as its detachable ENC microphone. Or, maybe it’ll simply be best for those of you that place a great feature set above straight up sound quality.

If you’re only after pure audio quality, however, there are probably better options at this price point – ones which can provide a better separation between different frequencies and sounds, and that doesn’t lean too heavily into bass response.

A feature-rich headset now at a more competitive price point, but its dual drivers don’t quite put out the audio quality that they promise, with a wide but unfortunately slightly muddy soundscape.