Riot Games have been dominating the esports space for some time and Valorant is still trending upwards.

With millions of players experiencing the game since beta, it can be a little overwhelming for a newcomer to join in on the fun. With the use of this beginner’s guide, you’ll be armed with the core knowledge needed to succeed in all levels of play. We’ll be breaking down the game into 6 categories which you can find below!

As far as team-based first-person shooters go, Valorant takes the best from similar games in the genre. Pairing ability based heroes with a vault of weaponry enables the game to play in a hypercompetitive fashion. This 5 versus 5 multiplayer shooter is closest to Counter-Strike: Source in terms of gameplay with the added bonus of characters with unique abilities.

So what’s the objective in Valorant? Well to put it simply, there are two factions in the game – Attackers and Defenders. The Attackers’ job is to push a site where their objective is to plant the “Spike”. Like other “search and destroy” style shooters, if the Spike detonates, the attackers win the round. Their opponents – the Defenders – must stop the enemy team from planting the Spike at all costs.

To win a round, teams must either wipe out their opponents, plant/defuse the spike or a combination of both. A team achieves victory after winning 13 rounds before the opposing team.

What Role to choose 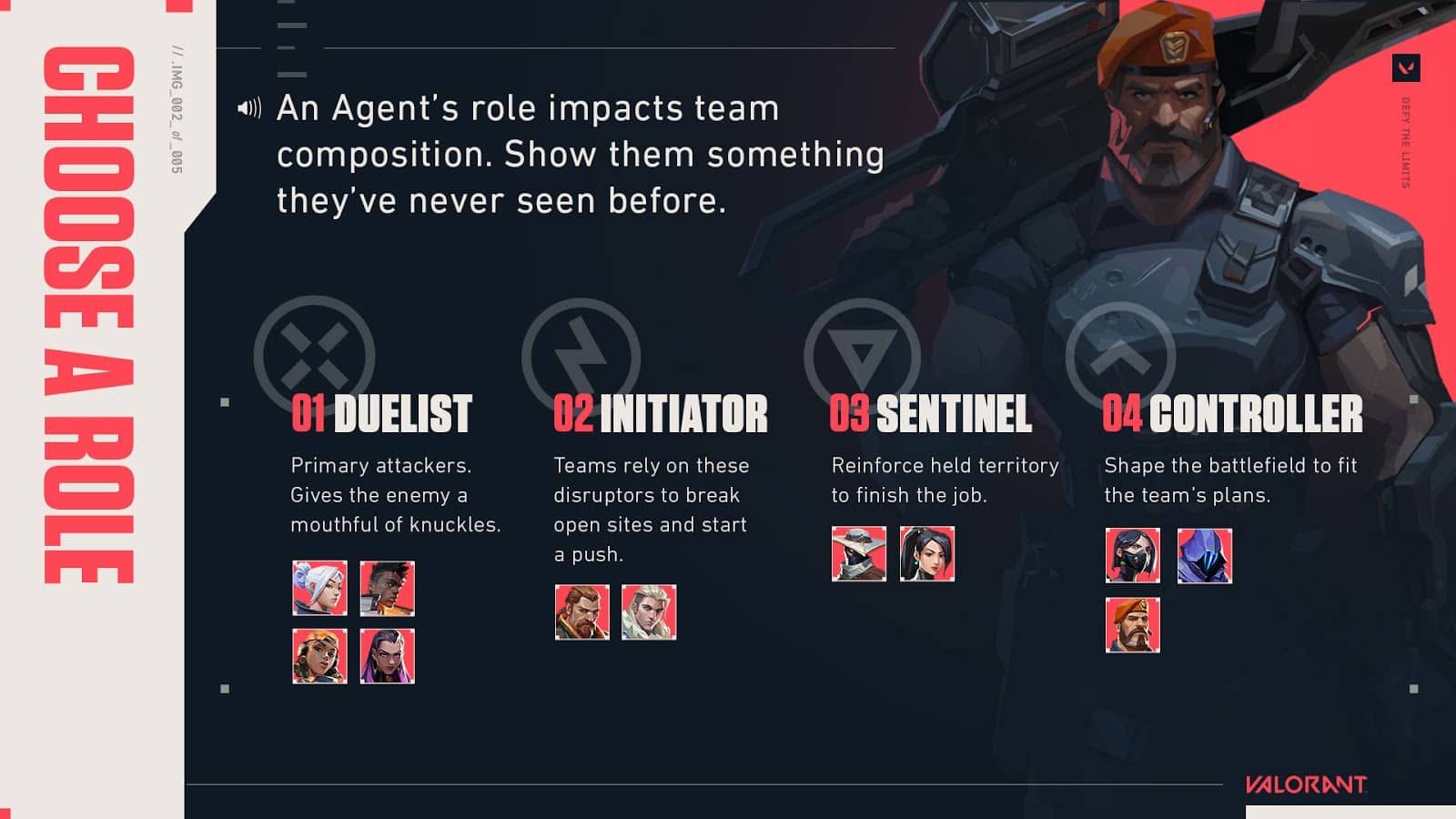 Duelist: The Duelist class are a set of characters that excel in single target gunfights with the use of aggressive and damage dealing abilities to compliment their weaponry. The Duelist class is made up of Jett, Phoenix, Raze and Reyna. They fit both an “entry fragger” and “lurker” playstyle effectively. If fast-paced and reckless fun is what you’re looking for, this set of agents would be ideal for you!

Initiator: Initiators act as the battering ram to break through chokeholds and take over key points of the map such as the sites. Although not necessary for a team composition, Breach and Sova can find great success without exerting too much effort. Both agents are able to lead the charge through utilization of information gathering abilities and area denial abilities alike. Though a bit more meticulous and less flashy than Duelists, Initiators can find just as much enjoyment with a bit of practice.

Sentinel: If you prefer a slow, defensive playstyle, the Sentinel archetype will probably bring you the most enjoyment. Sentinels are able to hunker down and defend major avenues with the utilization of their abilities. Cypher and Sage are among the top agents because of how much utility they can bring to a defending team. The recent release of Killjoy also boasts incredible Sentinel power.

Controller: What makes Controllers so useful is their ability to shape a map to their desired plan. Commonly referred to as “smokers”, Controllers are able to snuff out opponents’ sightlines and shroud allied movement. They provide excellent area denial with relatively low effort (save Viper). Omen and Brimstone are among the top-tier of agents within Valorant, providing their team with multiple 100% accurate smoke grenades.

Should you be looking for more information, you can find Riot’s detailed description of all of Valorant’s agents including the recently released Killjoy here.

Moving back to the topic of rounds, there are some similarities you can find in Valorant that translate over from most competitive shooters. At the start of the round, players are greeted with a “buy phase” in which they can purchase a loadout from a cast of weapons as well as character specific abilities and armor. 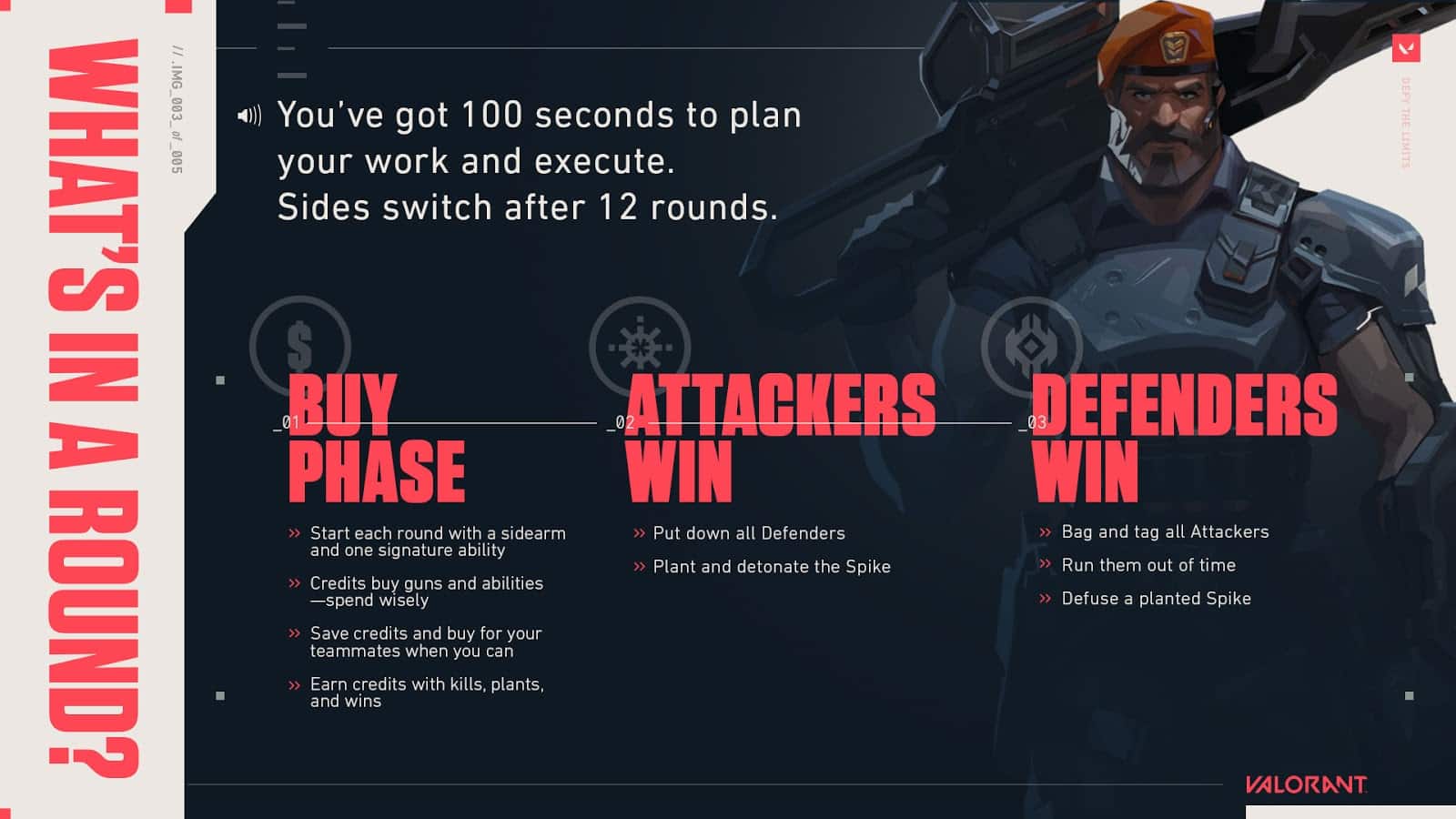 Players start off with 800 credits in the initial round dubbed the “pistol round” as an introduction to the match. These initial rounds only happen twice per match, once every 13 rounds when sides switch. Over the course of the match, players will earn credits depending on their performance such as kills, plants/defuses and round wins/losses. When looking for the ideal weapon to buy, you should definitely refer to our gun tier list! Typically as the game goes on, you’ll be able to purchase more powerful weapons.

Rounds come to an end depending on certain objectives that each team has. Attackers can only win in two ways, either by planting and detonating the Spike or by eliminating the entire defending team. On the flip side, Defenders can win in one of three ways instead. Like the Attackers, they can win by wiping out the entire enemy team or defusing the Spike after it has been planted. The third method of victory can be achieved by running out the round timer of 100 seconds.

If you’re coming to Valorant from any other shooter, you’ll easily recognize the different types of weapons as well as how much power they’ll have in comparison to other categories of guns. Valorant has divided their guns into 6 types: sidearms, submachine guns, assault rifles, sniper rifles, heavy machine guns and shotguns. 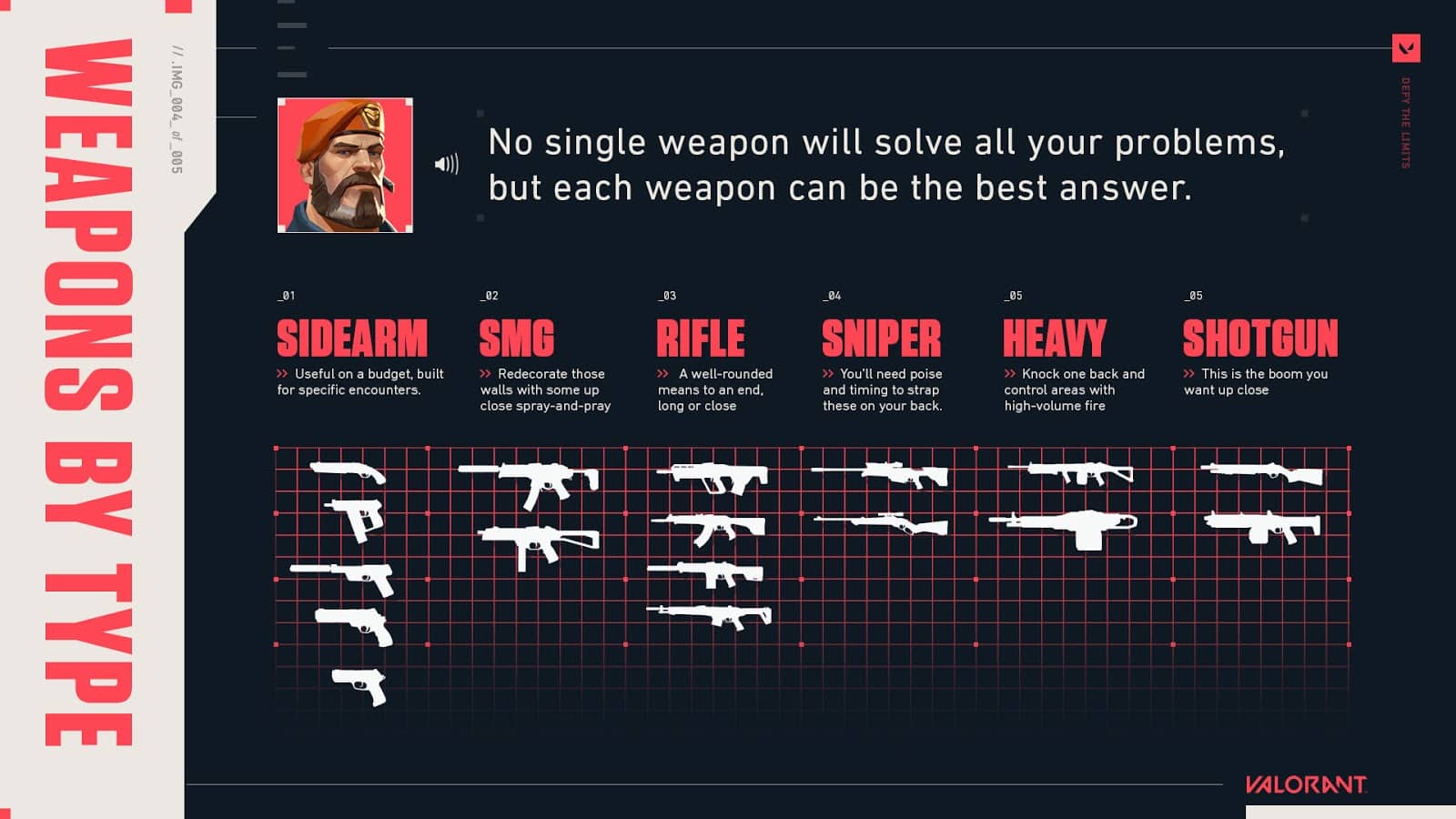 As their name suggests, sidearms aren’t your main weapon (outside of pistol rounds). All of these weapons are useful if you’re on a budget and can protect you in a pinch if you can’t find time to reload. However, their power is severely limited outside of short ranges, having incredibly high damage drop offs after 30 meters. Making up the sidearms in Valorant are the Shorty, Frenzy, Ghost, Sheriff and Classic.

Boasting an incredible rate of fire, the SMG’s of Valorant are the means of which poor aimers can find some level of success. This budget-friendly spray and pray class of weapons is made up of only two weapons – the Spectre and Stinger.

When it comes to a jack of all trades weapon, the assault rifles can never really let you down. Boasting great damage at all ranges, their only drawback to having raw power is a slower fire rate. The damage increase and reliability makes rifling so much more valuable in general play. Rifles include the Bulldog, the Vandal, the Phantom and the Guardian.

Another class of weapons with only two entries, the snipers are high damage bolt-action weapons intended for longer range combat. Enter the Marshal and Operator, these scoped rifles are powerhouses in the right hands and are the bane of every unwary Attacker.

The big brother of the spray and pray SMGs, Heavies (also referred to as LMGs) are basically lower damage rifles with a massive magazine size. Their intended use is to suppress areas with a barrage of bullets, controlling key areas and denying enemy advances into your territory. You’ll find that the Ares and Odin make up the entirety of the category and if you listen closely, you can still hear them firing to this day.

Taking a different approach to spraying, shotguns are excellent at quickly breaching or defending a chokehold up close and personal. By using the Bucky or the Judge, you sacrifice damage at range for some of the highest damage in the game within 10 meters.

If you’re unsure of what weapons to buy, try them all out in the Firing Range within the game and get a feel for each one. Do your best to understand the pros and cons of each to map out the ideal situations for their use. Should you be struggling to decide on what weapons are best, you can refer to our handy Valorant Guns Tier List article. For more information on specific weapons, you can find Riot Games’ in-depth arsenal guide here. 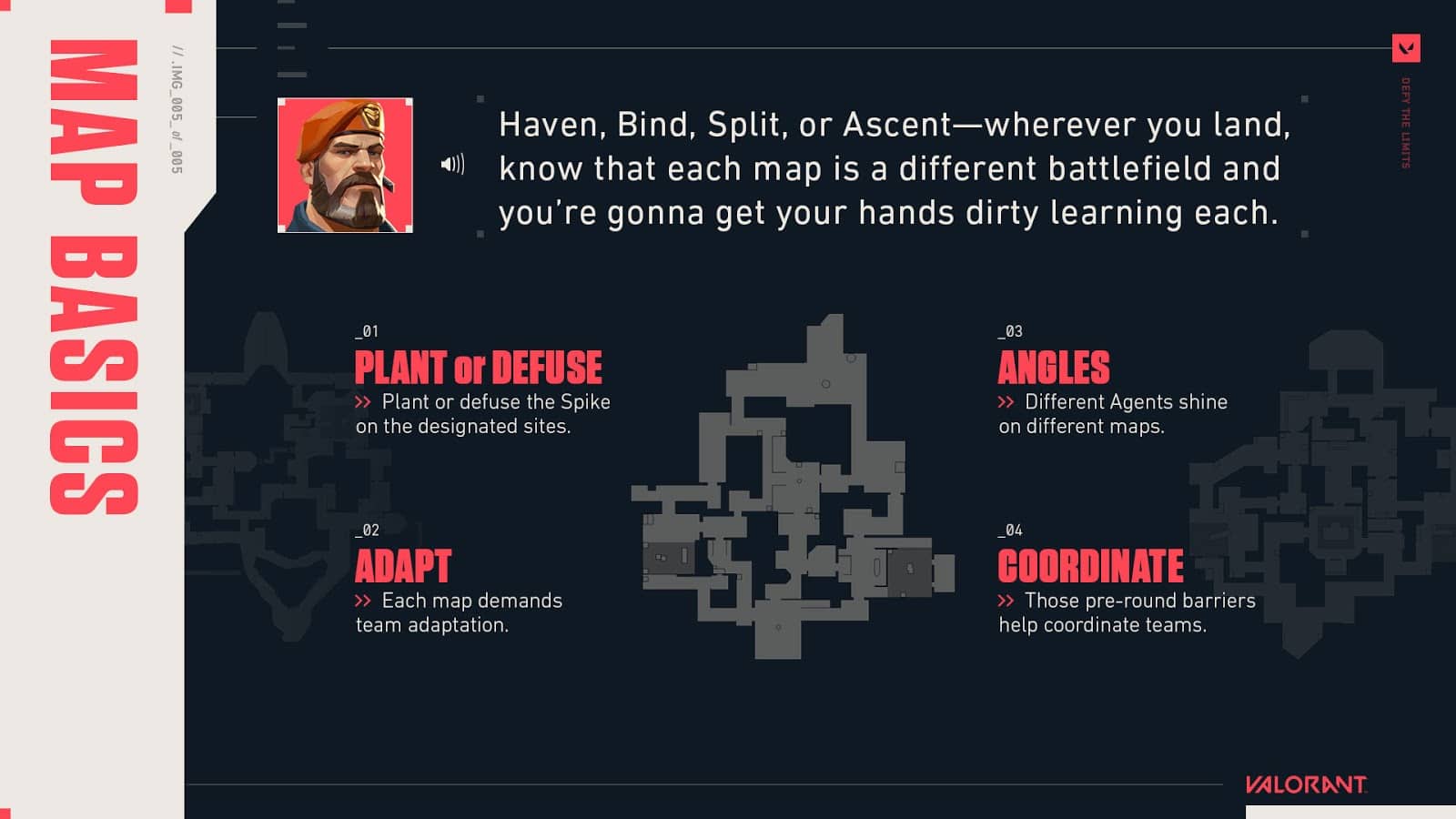 Currently, Valorant has a selection of four maps – Haven, Bind, Split and Ascent. Each one offers a unique mechanic that alters strategies to reflect those specific changes. What they all have in common is the same objective. Attackers must plant and detonate the Spike while Defenders must prevent that from happening. Each map has a varying amount of angles, both short and log. For a better look at the maps, you can find the Riot map outlines here.

Bind: Bind features one way teleporters that can take any player(s) to another location instantly. They’re located in the middle of the map and the outsides. It’s also interesting to note that there is no “middle” on bind, leaving players to decide if they want to go left or right to execute.

Split: Split has a special way of maneuvering the map vertically with the introduction of ziplines, commonly referred to simply as ropes. Players can either use them quickly while making an audible sound or slowly use them while maintaining silence.

Ascent: Ascent uses lockable, armored doors to cut off major choke points into breaching a site. They can only be locked and unlocked from the inside and must otherwise be destroyed to regain access to the entranceways they block.

When it comes to perfect play, your best aids are the simplest ones. Use your hearing to carefully determine where your opponents may be by following specific audio queues. Valorant features 360 degree hearing that also takes verticality into consideration. If you play it slow, you may be able to hear an opponent slip up and blow their cover. 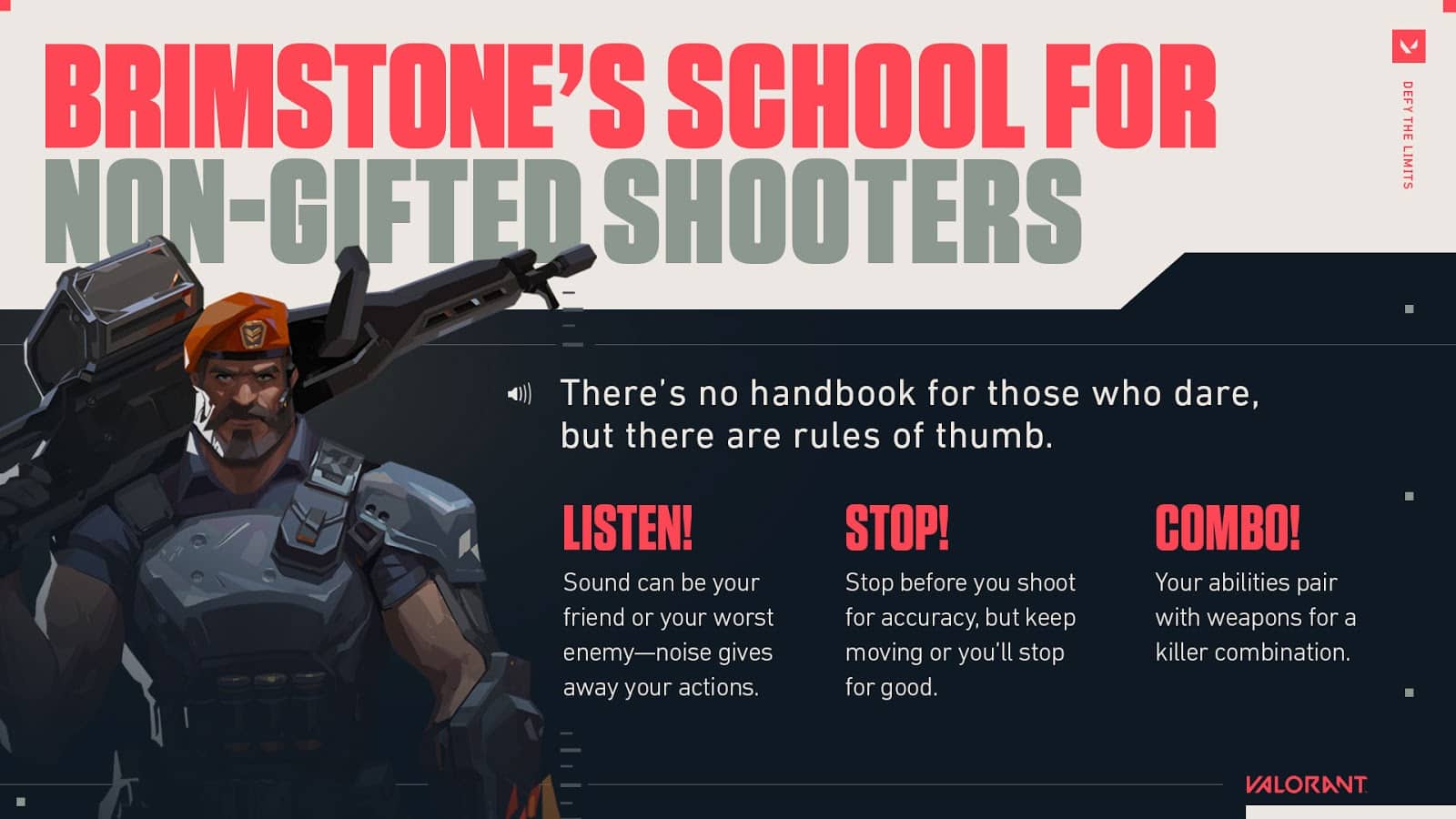 Aiming is a lot more difficult when moving and will cause you to lose more gunfights. The key is to try to stop and shoot if you can or take quick peeks before lining up a shot. Many of the elite weapons have great wall penetration, enabling you to inflict some heavy damage without your enemies even laying an eye on you.

Last but not least, it’s important to remember that Valorant is a competitive hero based shooter. Each agent has unique abilities that give them great strengths when used correctly. These abilities care for certain playstyles (refer to What Role To Choose) and some characters benefit more from situations than others. For example, if you’re playing a Duelist, it’s important to use your abilities to find quick kills or lay down some heavy damage. Note that abilities do cost credits and have limited uses – use them efficiently. 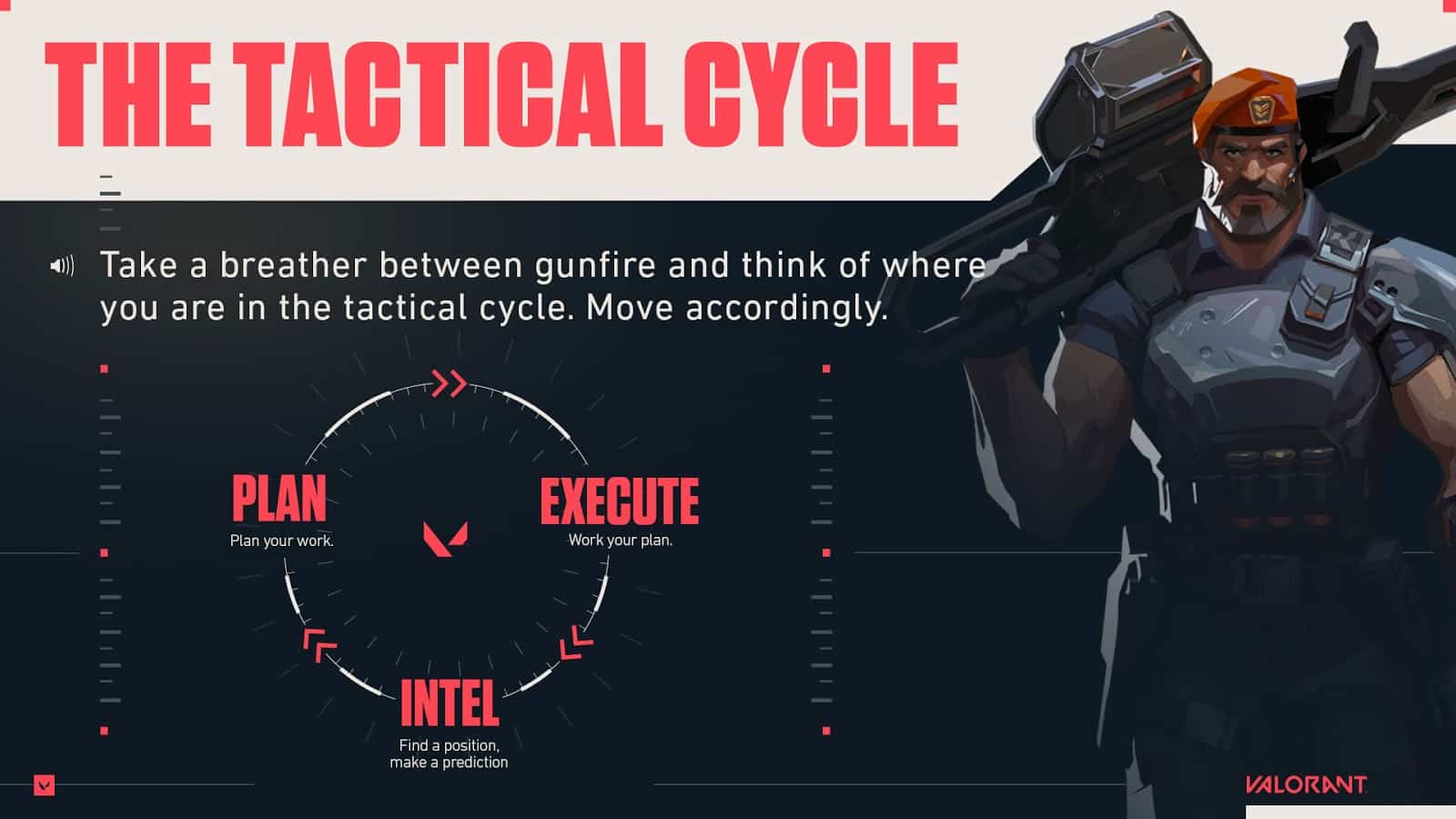 When it comes to developing, like all things, practice makes perfect. Don’t sweat it if you don’t place in the Immortal rank on your first run. Keep grinding and working on your aim because most of it is just muscle memory. Worst case scenario, you can replace your aim with map knowledge and learn to play off-angles and hide in random corners to catch your opponents off guard.

For more information, you can check out Riot’s Beginner’s Guide.