The list of competitors is endless, with National Football League (NFL) players like Kyler Murray and Kurt Benkert mixing with Fortnite competitors such as Kyle “Bugha” Giersdorf and Cody “Clix” Conrod. Playoffs Week #1 occurred a few weeks ago, where Fortnite World Champion Bugha won the first streamer-only Zone Wars tournaments. He claimed $15K USD and the second draft pick in the Streamer Bowl 2 Finals next month. With only three playoff weeks remaining, professional Fortnite players and content creators are scrambling to grab a spot in that very draft.

The Streamer Bowl 2: Playoffs Week #2 featured the same format as week one. However, the spread of talent shifted focus to primarily content creators. Top Twitch personalities like Ali “SypherPK” Hassan, Nick “Nick Eh 30” Amyoony and Sommerset were just a few of many names that participated. Week two began with a trio pub stomp competition before transitioning to another streamer-only Zone Wars competition. It was an intense day of action and there’s a lot to recap.

The first leg of Playoffs Week #2 pitted Kyler Murray, SypherPK and Sommerset against Christian McCaffrey, Nick Eh 30 and sparkles_qt. The two trios squared off in a public match “bot race,” where the team with more placement and elimination points claimed victory and bragging rights. After an even game one and a landslide game two, Team Kyler Murray was in a predicament. Needing an outstanding performance in the final match, the Arizona Cardinals quarterback rallied his team to victory. On the shoulders of SypherPK’s masterful game planning, Kyler Murray earned most of their teams elimination, which earned them double points.

Kyler Murray and Christian McCaffrey both had their opportunity to shine ahead of the Streamer Bowl 2 Draft in three weeks. For Sypher and the other Fortnite players, it was merely a warmup for the $65K USD Zone Wars tournament.

Also Read: IO Guards Have no Place in Competitive Fortnite 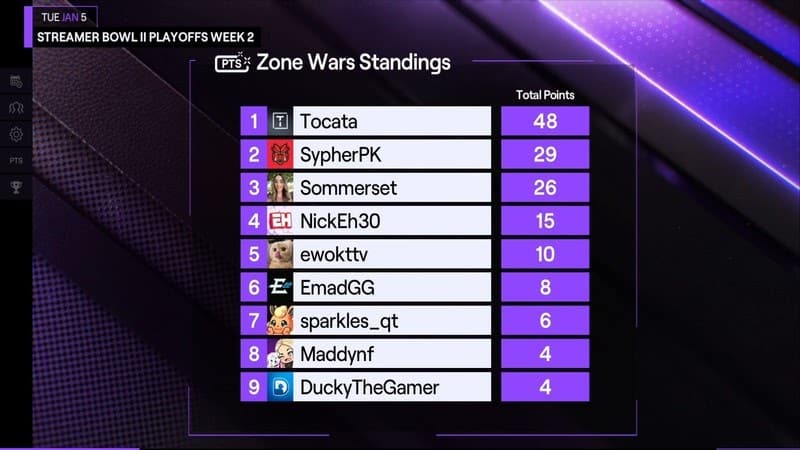 All nine players participated in three maps, totaling five rounds each. Tocata, Emad, SypherPK, Sommerset, Nick Eh 30, Ewok, sparkles_qt, Maddynf and DuckyTheGamer went to war for the $15K USD grand prize. Professional Fortnite player and content creator Tocata shredded his eight opponents in the Zone Wars tournament. After three maps, the Counter Logic Gaming representative managed several wins and 48 points in total. It was an absolute clinic for Tocata, who admitted in victory that he and his Twitch viewers play Zone Wars regularly during his broadcasts.

Tocata’s impressive showing granted him $15K USD and the third pick in the upcoming Streamer Bowl 2 Draft. The content monster himself – SypherPK – took second place, managing 39 points after three maps and claiming $12.5K USD. Another standout star was Luminosity Gaming member Sommerset, who showcased some clean edits and aim en route to a 26-point third-place finish; good enough for $10K USD. However, neither Sypher nor Sommerset could come close to what Tocata produced in the Zone Wars competition.

What’s Next for the Twitch Rivals Streamer Bowl 2?

ggs to all of today’s competitors pic.twitter.com/rFz2Es771q

With two playoff weeks down, two more remain before the big draft. Playoffs Week #3 will occur on January 12, featuring the same format as weeks one and two. We can expect more talents to clash in yet another exciting week. It will be interesting to see which combination of NFL and Fortnite players are in the mix next Tuesday.

All gas no brakes

On This Upload of XDVS07GAMING... Follow Along as XDVS07 Prepares for his adventures on Planet Namek.

On This Upload of XDVS07GAMING... Follow Along as XDVS07 Prepares for his adventures on Planet Namek.