The agents of House Van Saar are the latest to join the fray in the violent depths of the underhive! Flaunting high-tech weaponry and unprecedented discipline, Van Saar fighters are also clad in signature protective suits that increase their regenerative capabilities and allow them to ward-off damage, making them a fearsome force on the battlefield.

This new DLC allows you to take command of the Van Saar gang, who come packing their unique looks, House perk, and numerous combat skills. Lead these advanced fighters in the Operations game mode, where you will be able to recruit, grow, manage, and customize all aspects of your Van Saar forces. Each mission will bring different objectives that will require adapting your strategies to your ever-evolving roster – gained experience, sustained injuries, acquired traits and newly found equipment making each encounter a meaningful adventure, filled with choices and consequences!

The Van Saar’s techno-doctrine will also shake things up in multiplayer, where their fighters will strive to dominate the competition through advanced tactics – controlling the ebbs and flow of the battle with their ranged firepower and unique ability to deploy devastating plasma turrets.

As with all Necromunda gangs, the Van Saar also bring a host of new and distinct cosmetic options to the game, allowing you to fully customize your fighters’ appearance – from unique weapon skins to new equipment, accessories, and a huge range of colors to choose from, no two gangs will look the same.

Players who do not own this DLC will still be able to face off against human or AI-controlled Van Saar opponents, bringing new content as well as yet another major update and accompanying patch to all Necromunda: Underhive Wars community members! 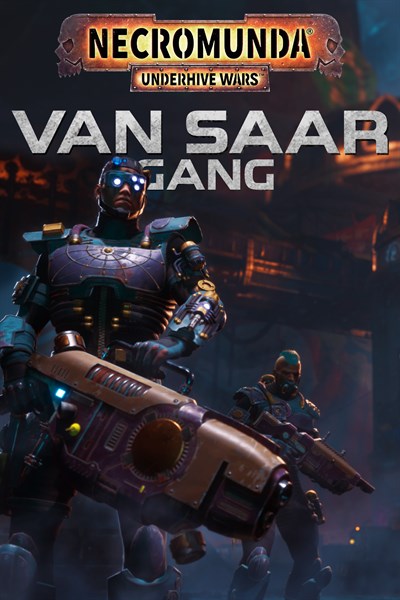 Gang up with the Van Saar in Necromunda: Underhive Wars!

Bring order to the Underhive with Necromunda’s technological powerhouse – the Van Saar’s high-tech suits preserving their life and, along with their extreme discipline, deployable turrets and spitting firepower, making them a true force to contend with.