The Perfect Picks For Halloween Board Game Night

The weather is getting colder, and Halloween is days away. If you’re not ready to don your costume and wander the neighborhood in search of candy, but you still want to find a way to get into the spirit of the holiday, then a horror-themed game night is a great way to go. Reach out to your friends, set up a time in the coming days, and snag one of these awesome board games to celebrate the occasion.

I’ve focused my recommendations on relatively recent releases, so I’ve left off some of the horror classics. In addition, you’ll note that more than a few of these games tap into the excitement of Lovecraftian themes and settings; chalk that up to the current broad enthusiasm for the Cthulhu mythos.

This new horror-themed cooperative adventure game has players confronting the likes of Dracula and the Invisible Man as they ravage an unfortunate village. In fact, most of the familiar Universal monsters make an appearance. One to five players wander the board, protecting villagers, collecting items, and slowly trying to whittle away at the monsters, each of whom has distinct conditions required for defeat. 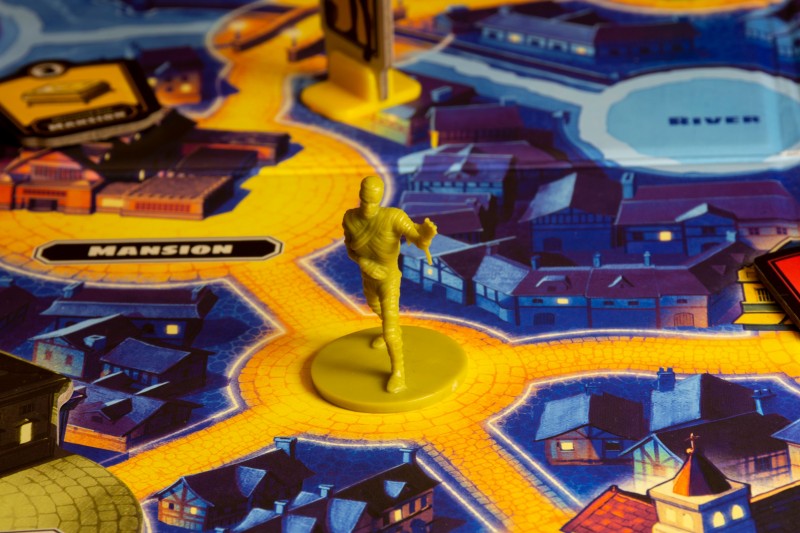 Adding and subtracting the number of monsters lends an easy way to customize difficulty. The gameplay is straightforward and easy to pick up, but with enough depth to keep dedicated gamers engaged, at least for the first few plays. Great art, attractive minis, and quick play times make this an ideal choice to pull out for a Halloween game night, when it’s likely you’ll have a wider mix of player experience levels. 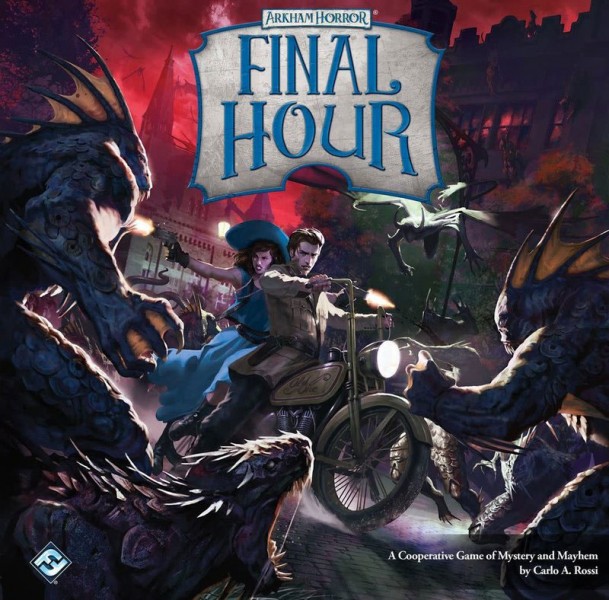 The enjoyable series of Arkham games from Fantasy Flight already have a number of excellent entries to recommend, but few of them are good fits for a shorter evening of entertainment. If you’d like to take a dive into the Cthulhu Mythos, but you don’t have a lot of time, Final Hour is a great choice. Players work cooperatively to reverse the effects of a ritual that has summoned a horrible Ancient One into the world. 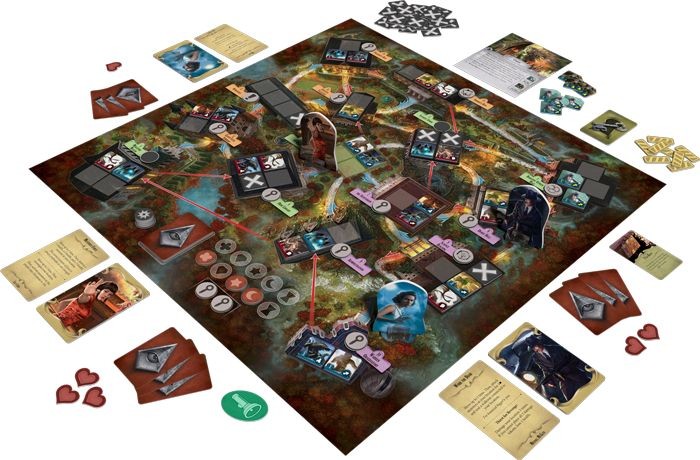 Players navigate the board, fight off monsters, and dig up clues in their investigations. Working together, they must figure out the specific ritual icons needed by eliminating the possibility that other icons are part of the process. It’s all the fun flavor of an Arkham game, but accelerated for a rapid finish. The whole thing is playable in an hour, and is best enjoyed by a full group of four players. 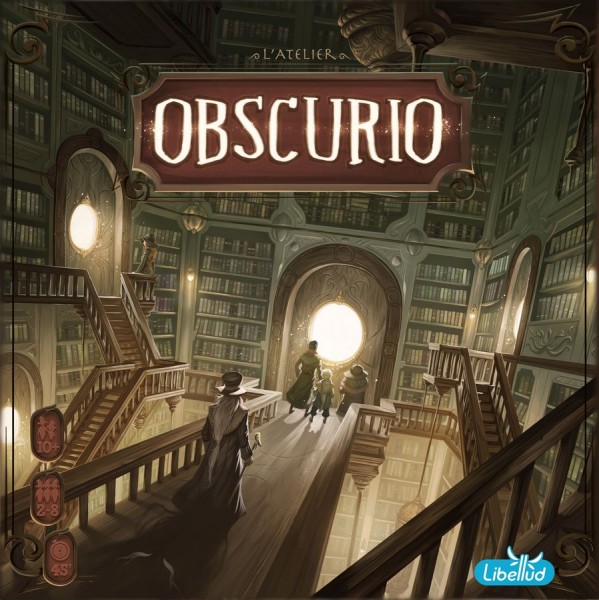 If you’re more into the magical and mystical side of the Halloween tradition over traditional horror, I’d like to offer up Obscurio – a stunningly illustrated and cleverly designed gem. The fascinating but easy-to-learn game mixes hidden traitor mechanics, cooperative play, and deduction. Most of the players (up to eight can participate) work in tandem as wizards looking to escape the evil sorcerer’s library. A magic sentient grimoire (one of the other players) knows the secret escape route, but can only communicate via beautiful painted pictures. Finally, hidden in the wizards’ midst is a traitor (the final player) attempting to obscure the truth. 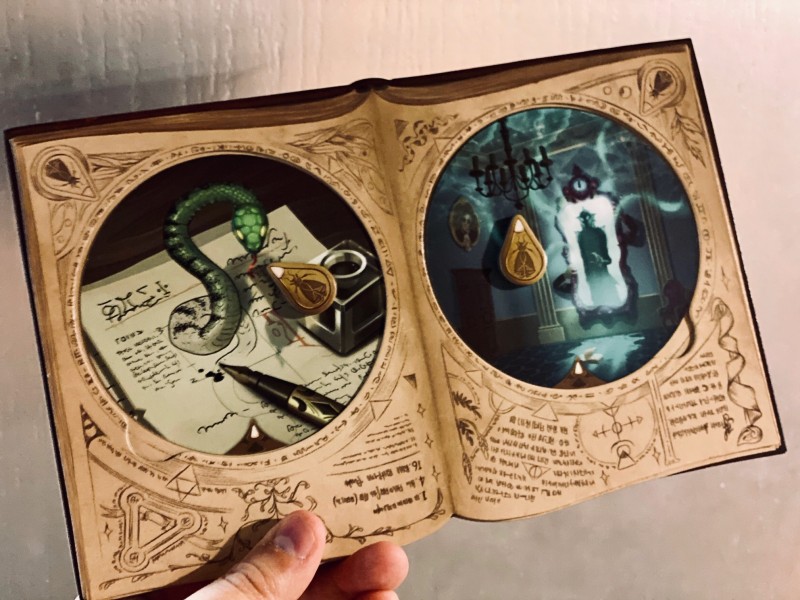 By letting the Grimoire player point to elements of the picture clue, the game becomes more specific and interesting

The grimoire player uses arrow tokens to point to specific details on different art images, and those details are meant to match with specific features of art on the different exit doors. But the traitor is secretly corrupting the process with additional pieces of art that act as red herrings. It adds up to a fascinating (but mechanically light) affair of second guessing and deductive reasoning that will have your gaming group coming around for a second helping as soon as you finish the first. Playable in under an hour for two to eight players, it’s a perfect fit for lovers of magic, art, and social play. 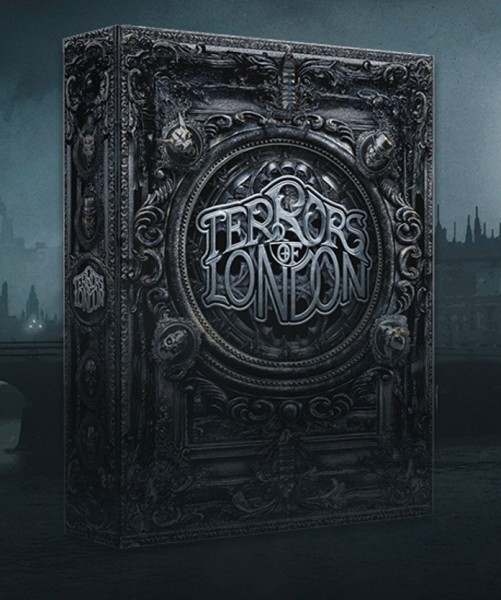 This competitive deck-builder is an excellent option for a small group of two to four experienced gamers ready to take a side trek into the dark side. Each player controls an Overlord with unique abilities, as you set out to terrorize London and take down the other Overlords. Over the course of the game, you recruit terrifying spirits, shambling undead, and other frightening entities onto your team before unleashing them, either alone or in ravening hordes that combo together to crush the opposition. 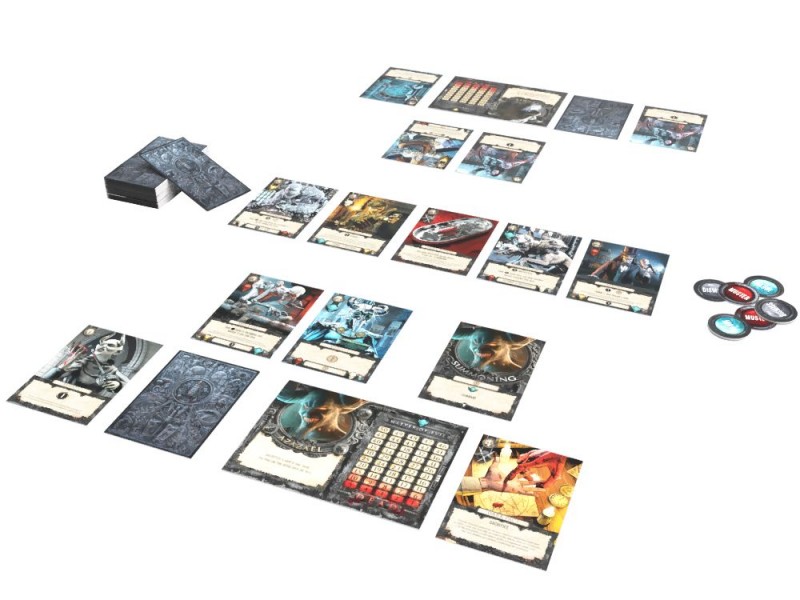 The colorful and evocative card art does a lovely job of tapping the Victorian London theme, and bringing the wide cast of monster characters to life. It’s doable to play a full game in under an hour, and once you know what you’re doing, as little as 30 minutes. 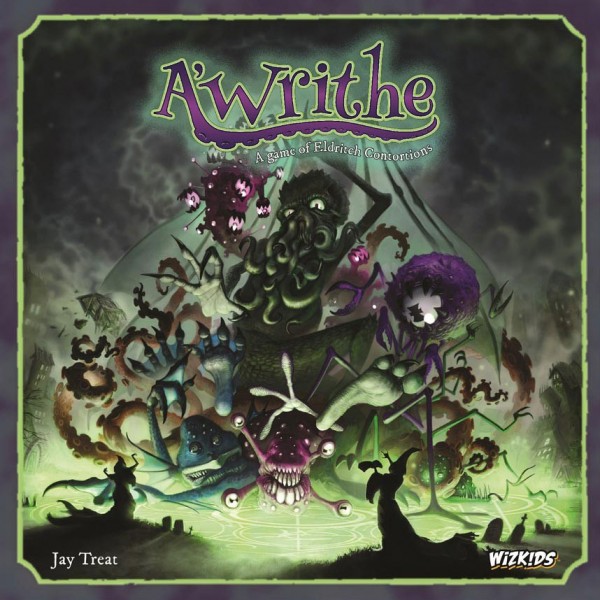 If you’re looking for something a bit more light-hearted, but still deeply enmeshed in the traditions of occult storytelling, I’d like to introduce you to the quirky genre mash-up that is A’writhe. A party game designed for four to six players, the group breaks down into teams of two, and aims to win by breaking through the veil of reality to devour the world. 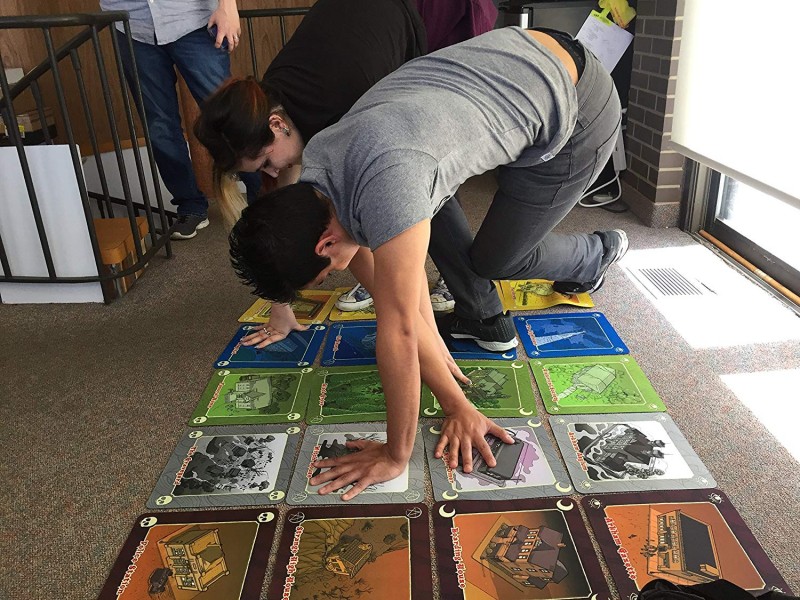 More specifically, each player team is made up of a cultist and a Great Old One. The cultist player holds cards that depict various sigils. The Great Old One player, meanwhile, is effectively enacting a game of Twister, writhing about on the floor to touch various spots (represented by mats on the floor) that depict specific locales in the ever-troubled town of Arkham. Touching a space (like the Boarding House or Miskatonic University) corrupts that space. If any combination of the Elder God players touches the right spots to form the sigil, that’s a point for your team, and time to start working on the next. First to three wins. The whole thing is silly, steeped in Lovecraftian fiction, and a good fit for a more active group of players – especially if you’ve had a few swigs of witch’s brew to start the evening. 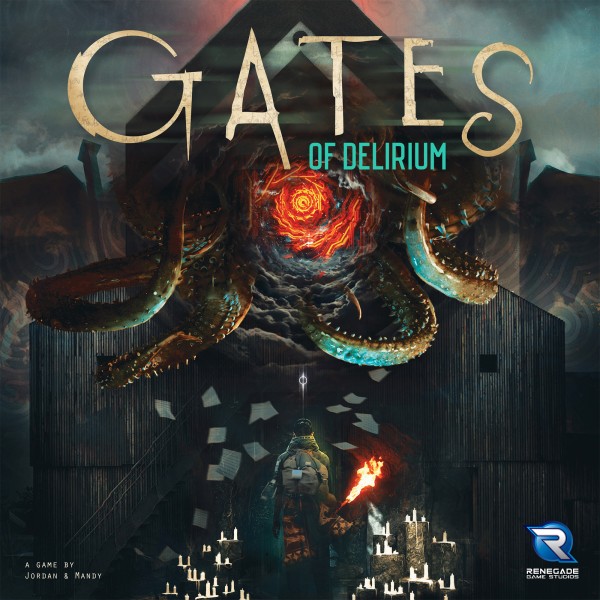 Gates of Delirium snared me as soon as I heard the concept. Players take on the role of intrepid investigators as they search for the pages of an ancient manuscript and map pieces that will hold back a horrible evil from emerging into the world. But players also take on the role of insane individuals who are feverishly arranging ancient runes to build gates that might allow those same horrible creatures to escape into our world. Every player takes on both roles. 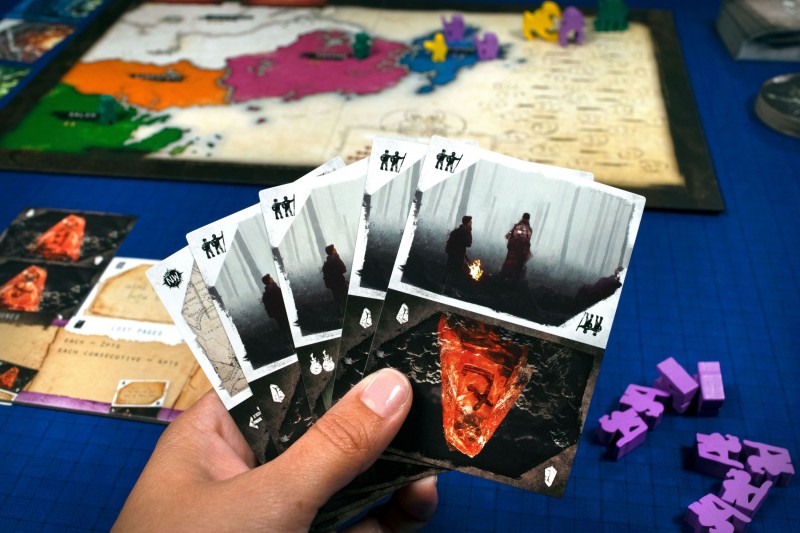 Action cards depict options for both sane and insane rounds

So, how exactly does that all work? In every round of Gates of Delirium, one of the players decides whether it’s a sane or insane round. You play the same characters, but with differing goals depending on your current state of madness. Your action cards depict two options, and you can only play the side that corresponds with your current perspective on the world. It’s an alluring and strange mix of gameplay conceits, and it’s great fun to effectively fight against your own machinations and compete against the other players for victory. Give it a shot with two to four players, and expect to finish a playthrough in about an hour. 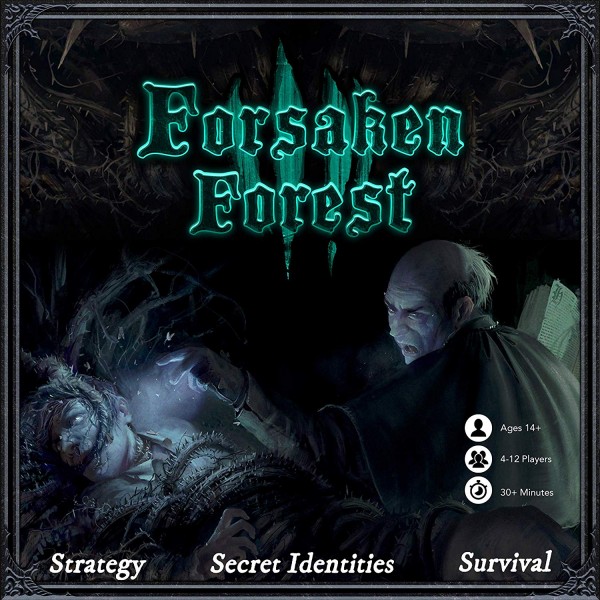 Like a little intrigue at your game table? Check out this social deduction game about a group of villagers who have brought a mysterious evil entity into their midst, and their only hope for survival is to venture deeper into a forbidding wood. Each player is randomly assigned onto one of two teams. You might be a villager trying to navigate the cursed forest and return to your home village. Or you might be a Forsaken, working to counter the villagers’ efforts and lead them into ruin and the lost depths of the Void. Either guide the group to your designated location at the edge of the board, or figure out who your opponents are, and eliminate them. Along the way, the evil of the forest will also work to thwart the villagers’ hopes. 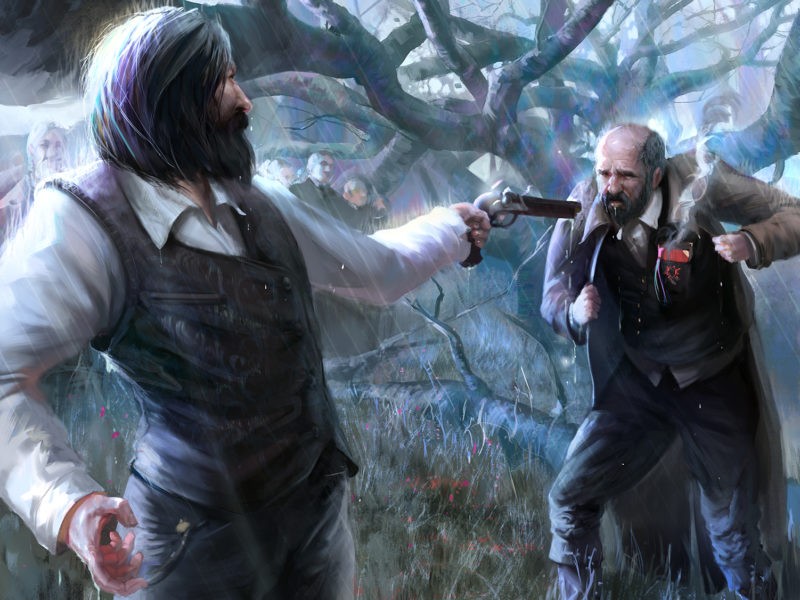 Forsaken Forest is an interesting mix of experiences. It has the navigation, card play, and actions of a strategy game, but the discussions and suspicion inherent to hidden-role traitor games. You likely know if that’s the right mix of experiences for your gaming group. Expect to complete your adventure through the woods in about an hour, with anywhere from 4 to 12 players. 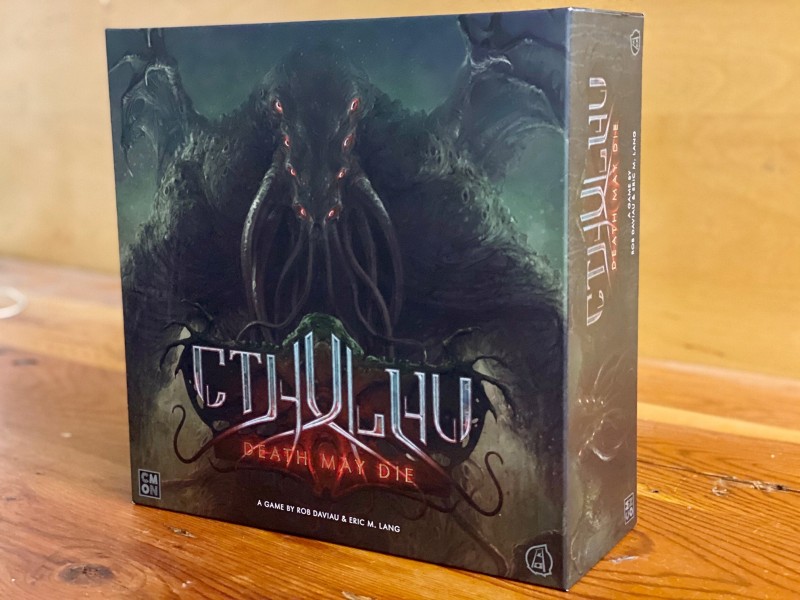 I didn’t want to close out this list of recommendations without mentioning the latest release from two excellent designers – Rob Daviau and Eric M. Lang – working together for the first time. I’m comfortable recommending the game with enthusiasm, but with a caveat: as a very recent arrival, I’ve only had a chance to play the game once in advance of this writing. As such, my full impression of the game is still coming together.

Nonetheless, there’s a lot of neat ideas at play here, and they make themselves obvious very quickly. In my early experimentation, Death May Die feels in many ways like the anti-Cthulhu game, despite the naming convention. Daviau and Lang have very consciously approached the familiar tropes of Lovecraftian fiction, and are playfully altering expectations around those tropes. Where most Lovecraftian games have you controlling naïve individuals who are encountering the supernatural for the first time, this game has you playing experienced investigators who save the world every other weekend. Where many Cthulhu games are awash in intrigue and atmospheric moments of tension, Death May Die is all about action and combat. And where one of the fundamental tenets of Lovecraftian fiction is the untouchable nature of the Ancient Ones, here is a game about shooting and ultimately killing seemingly immortal beings like Cthulhu and Hastur.

Beyond that, it’s enough to know that Cthulhu: Death May Die is a fully cooperative adventure for one to five players, and that each session is played as one of six distinct episodes. Each episode has its own components and narrative, and can also change depending on which of the two included evil gods is in play. Characters slowly go insane as they aim to murder the Ancient One, but clever play allows your growing insanity to be used as an advantage, by doing things like positioning yourself near a bunch of enemies before an uncontrollable violent outburst. It’s a big and cinematic new release with a lot to explore, and it’s one worth keeping an eye on, even if you might not be able to snag a copy ahead of this year’s Halloween. Expect broader availability in the next few weeks.

I’m confident that at least one of those games can hit the right note for your Halloween game night, but there are a ton of older classics that I’d be happy to share, if you’d like to learn about them. In fact, you can read about some of those recommendations in a similar article I posted at this time several years ago. If you’re still hurting for ideas, hit me up via email from the link below, and I’ll be happy to help you find the right game to terrorize your friends and family.