It’s Friday! Or is it? Time is a social construct, so I could tell you it’s Wednesday today, and how could you prove me wrong? It’s Friday because it’s the fifth day this week, but when did this week start? Can’t prove that either, I’m afraid. Well, the calendar in the bottom right corner of the monitor says it’s Friday. Who told the computer that it’s Friday? Anyone could change that display in the settings. What I can say, for certain, is that events occurred and news transpired in this indefinable time period, and it’s been turned into bite-size chunks, here in the round-up…

We at VideoGamer are working from home, like lots of people, to limit our exposure to the coronavirus. Daily routines have been upended, though I still wake up at 6.00am due to the sunrise, which is only going to get earlier and earlier. Summer is coming, but the sunny plans that many have laid down like a beach towel on crispy astroturf have unravelled. The lockdown will continue here in the UK for three more weeks, then it will be reviewed. So, what to do with all of this time?

Watch TV shows? Tired, blasé. Chug through the backlog of games from the past few years? A listless task. Learn a new language? If you wish for all joy to be mangled and mutilated by a green owl, feel free. But, do not despair. This morning, I was reminded of the contraptions brainstormed by British artist W Heath Robinson. His illustrations depicted an unnecessarily convoluted mechanism, often involving steam or weights, to achieve a very simple objective. I propose that these designs were before their time, and ideally suited to today’s issue, which is time.

In fact, Robinson’s works regularly feature an element that is exceptionally pertinent. Distance is placed between the user and the end result. For example, the Testing Sauce invention: 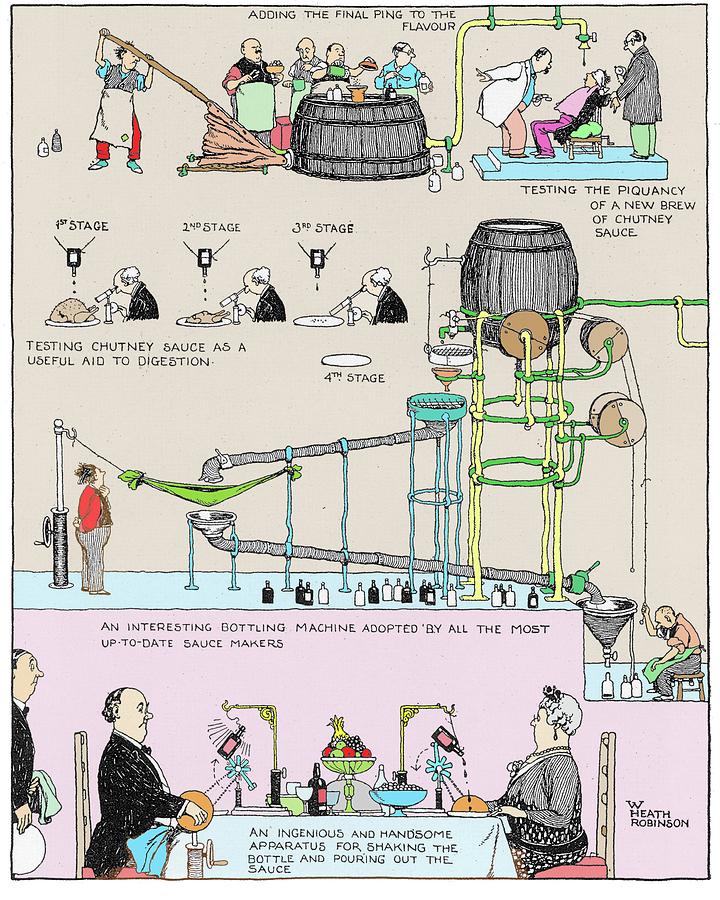 This is befitting for maintaining distance between the supplier and the consumer, reducing the risk of infection, and also between people who live together. Perhaps it will be Robinson’s illustrations that exemplify the luxury of too much time, and the fallacy of attempting to make it worth our while. Also, I have no idea how to even start building the sauce testing contraption. Here’s the news.

The new label will be “assigned to any game that contains in-game offers to purchase digital goods or premiums with real world currency (or with virtual coins or other forms of in-game currency that can be purchased with real world currency) for which the player doesn’t know prior to purchase the specific digital goods or premiums they will be receiving (e.g., loot boxes, item packs, mystery awards).” It will be given to games that also feature “non-randomized paid elements,” and the notice will cover “loot boxes, gacha games, item or card packs, prize wheels, treasure chests, and more.”

A Resident Evil 4 remake is on its way, alleges report

M-Two, a studio that contributed to Resident Evil 3’s development, is in charge of the remake. Its work on the most recent Resident Evil release was apparently “practice” for its own project. “You can bet your ass they were also following reception of RE3 Remake closely to see what worked, didn’t work, etc.,” said the source, and there is proof in the pudding. Resident Evil 3 offers a new type of enemy who acts like Plagas in Resident Evil 4, and features a quick time event, which was a core mechanic in Resident Evil 4. This may be the next venture for Capcom’s motive to “awaken dormant intellectual properties,” but we should take the rumours with a pinch of salt for now.

Pokémon Pink may be the cancelled companion game to Pokémon Yellow

The source code for Pokémon Blue and Pokémon Yellow leaked online, and buried in the code was an odd reference to a Pokémon Pink. Pokémon Yellow’s source code states its title to be “Pocket Monsters Pink and Yellow,” and “Pink” appears elsewhere in the code, inferring that Pink might have been released for the Game Boy too. The prevailing theory is that the game would have been aimed at “girl gamers,” featuring Clefairy or Jigglypuff as its box art star, and may even have used a female protagonist. The Pokémon Company has never mentioned a Pink version before, so we’ll have to wait and see what comes of this discovery.

China to ban online games because they are an “authority vacuum”

After Hong Kong pro-democracy activist Joshua Wong used Animal Crossing: New Horizons to share a screenshot of his virtual protests and insults levied at the country’s president, the game has been banned from sale in China. A new report now states that the communist regime will be reviewing the spaces offered by online multiplayer games, which let gamers interact with people from other countries. At the moment, new laws are being drafted to “expand the scope of online censorship in video games,” and that includes single-player online games, too.

Sony will pare down production of the PlayStation 5, alleges report

Owing to pricey parts, Sony is said to be curtailing the number of units available upon launch. Assembly partners are aware that five to six million units of the new console will be needed in the fiscal year ending March 2021. Comparatively, 7.5 million units of the PlayStation 4 were sold in the first two quarters of the fiscal year ending March 2014. That’s a big difference. In addition, the price of the console reported to be around $499 to $549, so that the company breaks even.

Office Create, the developer of all of the other Cooking Mama titles, claimed that Planet Entertainment was “unauthorised” to release the new Switch game. The publisher responded, stating that it followed the “exact approved design” provided by Office Create. But, “creative differences arose as Cooking Mama: Cookstar was near completion that were outside the scope of our agreement and the game design approved by Office Create.” In spite of this, the publisher is content that it is “fully within its rights to publish Cooking Mama: Cookstar.” Office Create is “evaluating all legal action against Planet to protect our customers, intellectual property rights and the Cooking Mama series.”

Crysis Remastered is coming to PC, PlayStation 4, Xbox One, and Nintendo Switch

Crytek appeared to be up to something, activating the official Crysis Twitter account after slumbering since 2018. Then, there was a reference to the protagonist of the first game in the series, which sparked speculation that Nomad would return. Now, it seems that the studio hadn’t locked down everything before the announcement, because a reference to an inbound Crysis remaster for all current generation platforms was found in the website code. Possessing “new graphic features, high-quality textures, and the CRYENGINE’s native hardware—and API-agnostic ray tracing solution,” we’re not sure when the game will be officially unveiled, but we’ll keep you in the loop.

NEO: The World Ends With You demo arrives tomorrow