Test Out The King Of Fighters XV Beta Starting Tonight

It’s time to break out and dust off your arcade sticks and prepare for a weekend of 3v3 battles in The King of Fighters XV open beta.

Starting tonight at 7 p.m. Pacific and running until 7 a.m. Pacific on November 22, PlayStation 5 and PlayStation 4 owners will have the opportunity to go hands-on with eight characters out of the final roster of 39 that will be available at launch. The primary function of this beta will be to test out the online multiplayer before the game releases in a couple of months. For the first time ever, KOF will feature rollback netcode from day one in an effort to improve the general online experience when connecting to individuals over a long distance.

This KOFXV test will feature both online and offline modes, including a training option, giving players a chance to learn character attacks and workshop combos or strategies without having to figure them out in heated battles. Five modes total will be present during the beta: Casual Match and Room Match for the online portion, giving players a taste of what matchmaking and lobbies will look like, while offline warriors can look forward to the aforementioned Training as well as Versus and a tutorial.

King of Fighters XV will have you build teams of three characters to duke it out by one against someone else’s chosen trio. There’s no tag mechanic, and you will only be able to play subsequent team members if you lose a round, so the order in which you position your characters will matter. Here’s the list of characters available during the test this weekend:

Each character belongs to a canonical team in the story of King of Fighters, but you can mix and match them as you please. SNK has released a PDF primer for the KOFXV beta, which you can view here. It gives the basic rundown on what to expect during the test and some issues the developers are aware of already (like how throws can sometimes desync the match). 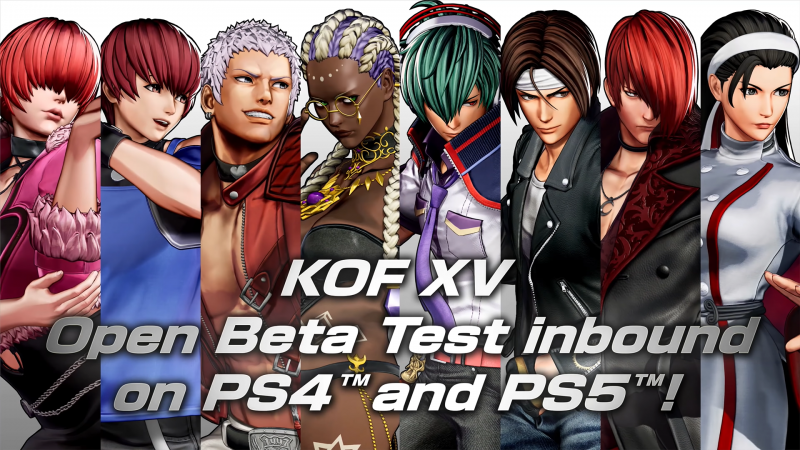 The King of Fighters XV is scheduled to release on February 17, 2022. While this weekend’s beta is only appearing on PlayStation consoles, the final game will be available on PlayStation 5, Xbox Series X/S, PlayStation 4, Xbox One, and PC.

Who’s your team going to be for this weekend’s KOFXV beta test? Are you looking forward to playing around with the new systems and characters? Let us know in the comments below!

20 Best Xbox Series X Games You Need To Check Out

Halo Infinite: 343 Industries Is Working To Add Fiesta, SWAT, And Free-For-All Playlists Before End Of Year