Everyone wants a well-priced, but pacey PCIe-based SSD, and we’re at a stage again where every manufacturer is starting to be able to offer such a thing. And the Seagate Firecuda 510 SSD is one such affordable, capacious 1TB drive.

Previously it was a case of Samsung and Crucial/Micron ruling the roost because of their combined dominance in the flash memory market and the former’s ability to create its own-brand, high-quality memory controllers for solid state drives. But the price of memory has collapsed in recent times, and there are new, affordable memory controllers available so anyone with a penchant for storage is able to piece together an impressively high-spec SSD without breaking the bank.

Lately it’s the Phison PS5012-E12 controller which has been most responsible, with many companies using the silicon to base their SSDs on. Seagate has paired it up with Toshiba’s speeding 3D TLC memory and has created an NVMe SSD that’s up there with the best of them, most notably the excellent WD Black SN750.

Peel the sticker off the Seagate Firecuda 510 SSD and you might be forgiven for thinking Seagate had got its act together and created its own NVMe controller, though in reality it has just rebranded the latest Phison silicon and added its own firmware to the package. Elsewhere Seagate is taking advantage of Toshiba’s impressive 64-layer 3D TLC BiCS NAND flash to pair with the eight-channel memory controller.

And, with a full 1TB of 3D TLC NAND, the Firecuda sample I’ve been testing is capably using those eight channels to deliver the sort of impressive overall storage performance we’ve been getting out of the 510 Series SSD.

The Firecuda also uses 1GB of SK Hynix DRAM as a cache for the drive, and runs a dynamic SLC system on the NAND to boost the write cache performance of the SSD too. On the 1TB version that is reportedly dynamically apportioned up to 28GB to help with large file and folder transfers, though that will change depending on how much space is taken up on the drive.

So far, so good. And the actual performance is incredibly impressive too; it’s not quite up to the high standards of the excellent Samsung 970 EVO Plus, but it’s not far off at all. The Seagate Firecuda is a touch off the pace when it comes to the read and write performance posted by the AS SSD benchmark, though it’s a little closer with the peak sequential ATTO read/write numbers.

That also means it’s pretty much on par with the WD Black SN750 drive we loved so well. It’s mighty close in the synthetic benchmarks, but the in-house WD controller seems to give it the edge when it comes to the real-world transfer and compression tests.

The issue there is that while the performance of the three drives – WD, Samsung, and Seagate – are pretty close, the Firecuda is the most expensive of the bunch. With the current pricing of the Samsung 970 EVO Plus it’s mighty tough to look past it as the go-to SSD of the day. It’s the fastest and it’s also one of the most affordable.

But not the most affordable. There’s another name you may not recognise up there in those benchmark tables – the Addlink S70. The Taiwanese storage company has been shipping affordable NVMe drives into the US and UK via Amazon and other etailers, and these SSDs are hugely undercutting the competition. To the point where its 1TB drive is practically half the price of the Seagate Firecuda 1TB SSD. Yup. Take another look at those benchmark numbers and think about that for a second…

It’s not some cheapo SSD cobbled together from leftover parts, it’s another NVMe drive using the same Phison controller and 3D TLC NAND from Toshiba – though with a slightly different batch number. In fact it’s almost identical to the Seagate to the point where I’d be surprised if they came out of different factories – certainly the PCB part number is the same. 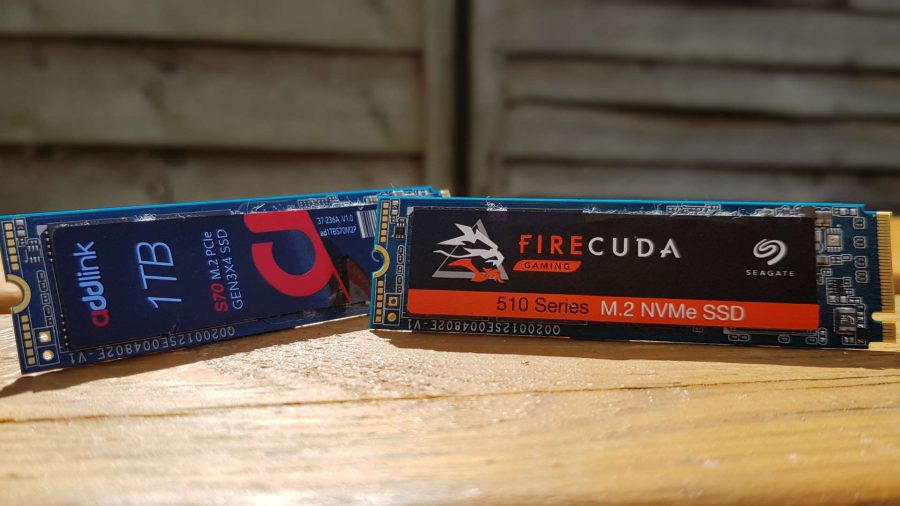 And that’s making it very difficult to recommend other SSDs right now. Samsung is still the best from a pure performance standpoint, but when you can get a 1TB drive that’s almost as capable for only just over $100 then where does Seagate go from there? Sure, it can point to having a higher TBW (total bytes written) endurance rating at 1,300TBW compared with Samsung’s rather miserly 600TBW, but the Addlink S70’s offering 1,200TBW, and that’s fighting talk.

The conclusion is the same then, if you’re looking for an affordable SSD then grab the Addlink drive while it’s still in stock. It may be a loss-leader – I’m honestly at a loss to figure out how Addlink can undercut to this level and maintain any level of margin – but it’s effectively the same drive as the Firecuda, but at about half the cost.

The Firecuda would have seemed like a bargain a few months back, but the competition is incredibly fierce among the Phison-powered drives, and the suddenly brutal SSD market as a whole.

How Age Of Empires II: Definitive Edition Hopes It Is Living Up To Its Name