There’s only one metric to measure speed, and that’s by asking ourselves “is it fast enough so we can fly away?” The words of four-time grammy award-winning artist Tracy Chapman in her 1988 single ‘Fast Car’ remain the metric by which I judge all things claiming speed as their greatest asset, and today we’ll be taking the Samsung 27RG50 (CRG5) for a test run to see whether it is fast enough… so we can fly away.

For starters, this monitor boasts a 240Hz refresh rate, so we can be damned sure it’s no slouch. Samsung has packed a panel worth its salt, and esports credentials, into the CRG5 – hence why I swiftly jumped into a game of Obra Dinn for a test run. Reflexes ahoy! With a 1500R curve across its 27-inch footprint, the CRG5 is certainly enough to impress and immerse in-game – and it’s pretty good at those FPS games, too.

Samsung has also jumped into bed with the green team and installed the necessary technical gubbins in the back for Nvidia G-Sync. That ensures when you’re in the moment and putting every frame to good use in a competitive shooter, you won’t fall foul of screen tearing or latency.

The panel itself is superb, too. Even without an IPS panel to dazzle with all the colours under the rainbow, Samsung’s speedy VA tech is more than capable of displaying a vibrant and impressive image. Contrast is fantastic, with the panel tech helping black levels along nicely. Similarly, white saturation is up to spec and decent enough to avoid it bright patches smudging all into one big eye-searing mess.

The sharp 1500R curve also causes little issue even across the panel’s extremities in the most far-fetched of circumstances. And as for ports, we’re talking two HDMI 2.0 and a single DisplayPort 1.2.

Unfortunately, there’s one aspect in which the Samsung CRG5 is irreparably let down. The stand. Despite Samsung’s pedigree in the market the CRG5 just can’t stand tall next to its peers. It really can’t stand up. The tilt functionality is so weak the weight of the panel makes it limply flop over forwards.

A fixed stand design with little mobility is something we’ve come to expect from monitors targeting the esports and competitive gaming markets. Yet Samsung’s usual monitor lineup is marked by the exact opposite. It seems to pride itself on its clean-cut, exceptionally manicured design, and most of the monitor’s we’ve looked at have been exquisitely put together with stunning stands to make even the most staunch console players jealous. But that’s exactly why this lacking unit sticks out like a sore thumb. 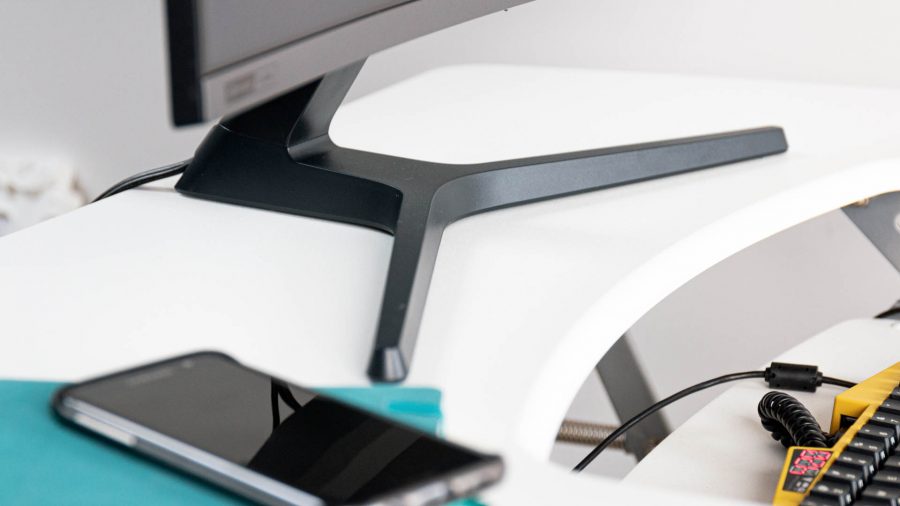 With a price tag of $400 more could’ve been done with the finishing touches – if only to ensure the tilt mechanism was up to the task. Stand aside, and once you’re engrossed in what’s going on with the impressive 240Hz VA panel at its core, the CRG5 impresses. Its panel is superb, speedy, and there’s no need to sacrifice accuracy and impressive visuals to game at 240Hz. Paired with a GPU powerful enough to drive the frames to make the most out of the CRG5 – and perhaps a monitor arm – this speedy panel is the perfect high-end companion for competitive gaming.

Plus I made up all that ‘Fast Car’ metric stuff anyways, it’s just a good song.

The Samsung CRG5 offers speed without sacrificing much in the way of performance – but we were left wanting by its sub-par stand.

You Can Play As Sonic In Super Monkey Ball: Banana Blitz HD

You Can Play As Sonic In Super Monkey Ball: Banana Blitz HD