Now here’s a product I’ve been very excited to try out ever since I reviewed the Samsung C49J89. We’re talking about the Samsung C49RG90 (CRG90), the successor to my beloved ultrawide of yesteryear. And if the generic name alone doesn’t whip you up into an impassioned frenzy, then maybe its 49-inch, 5120 x 1440, 120Hz ultrawide panel will.

While the C49J89 of last year was business in the front and party in the back, the CRG90 is all party, all the time. It’s a gaming monitor from the ground up, which means it comes at a premium to a comparable business model. This monitor will set you back £1,200 (it’s currently upwards of $1,890 in the US, and not yet available directly), which is not an insignificant sum of money to drop on a screen. But there’s plenty of flexibility and functionality in the overall package to dig your teeth into.

For one, the vertical resolution bump from 1080p on last year’s model to 1440p on the CRG90. Last year’s model often felt like a novel product – nonetheless a fantastic one – yet the expanded real estate on offer with the CRG90 makes it feel more like a productivity and gaming necessity than a quirky contraption.

The screen can operate in a couple of modes, and thankfully you’re not limited to merely its 32:9 aspect ratio. Rather, if you utilise dual cables between your GPU and any one of the CRG90’s inputs, you can opt to run the panel as two independent monitors in Picture-By-Picture mode. This will limit the refresh rate to 100Hz and disable FreeSync, yet for productivity tasks – most of my work day – this is an absolute life-saver, and allows me to fully utilise window snapping to my heart’s content. Once you’re done with work, it’s only a couple of button presses on the front monitor before you’re back gaming in 32:9 glory.

The rig necessary to power this bit of kit in game needn’t be quite as ludicrous as your usual 4K fare, either. The 5120 x 1440 resolution is a touch less total pixels than a direct 4K panel – 7,372,800 to 8,294,400 total – and that eases both the financial pressure on necessary graphics card kit and allows you to make more of the 120Hz refresh rate on offer in-game. Still, to get the most out of this monitor a relatively high-powered rig is required.

And don’t forget not every game will support an ultrawide aspect ratio. Destiny 2 does, however, and is absolutely stunning in full 32:9.

Refresh rate is actually one of the few specs on this monitor to be lowered for the latest model. The new panel is capable of 120Hz, down from 144Hz. But with FreeSync 2 HDR helping along, there’s little to complain about.

We got this panel up and running with Nvidia G-Sync, too. But it’s worth noting this isn’t officially on Nvidia’s list of approved FreeSync screens, and therefore has not been officially validated by the green team to work with its variable refresh rate tech – so your mileage may vary.

And we’ve touched on another key feature briefly: HDR. In fact, the VA QLED (quantum dot) within is capable of the Vesa DisplayHDR 1000 standard, with a peak brightness matching the required 1,000 nits. While PC HDR remains a troublesome beast in Windows, once HDR was applied from within the game the results were stunning, and the CRG90 totally avoids the pitfalls of inadequate HDR implementation that befouls some gaming panels. A few games still struggle to avoid blowing black levels to all hell, but this is one gaming monitor where it doesn’t feel like you’re sacrificing contrast, saturation, or accuracy in the name of high dynamic range. 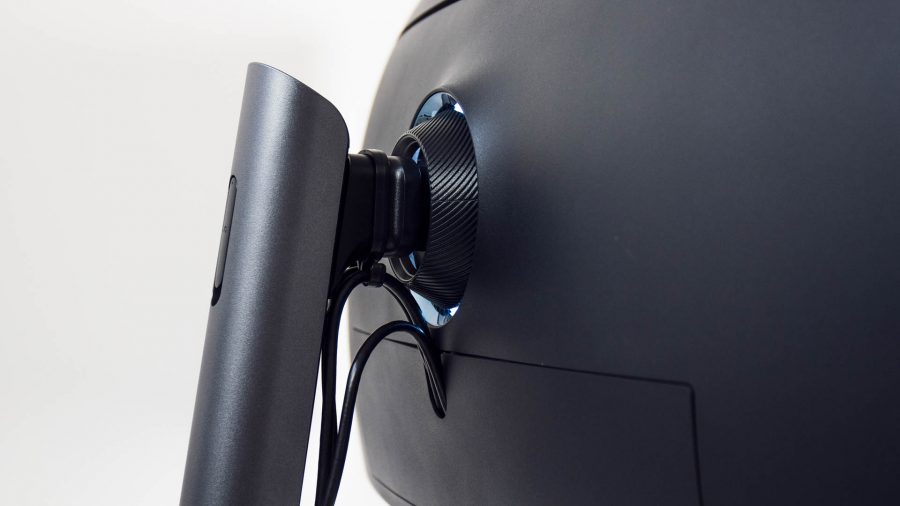 This surfboard of a monitor is plonked onto a sturdy stand with good mobility, a built-in headphone stand, and an integrated cable tidy solution. It also has an LED light around the VESA mount location – so all in all it’s oddly classy for a gaming monitor. Bravo, Samsung. Ports wise, we’re talking two DisplayPort 1.4, one HDMI 2.0, a 3.5mm headphone jack, and four USB 3.0 ports.

If you take a fast panel, kit it out with quantum dot, stretch it out like Mike Teavee, and include some smart features behind the scenes, you get the Samsung C49RG90. It’s a monitor that’s just as stunning switched off as it is turned on, and the Samsung team have only improved on what came before with a panel that is as suited to professional work as it is immersive, all-encompassing gaming. If you’ve got the money, and the urge to ditch the clutter of multiple monitors, the Samsung C49RG90 ticks all the usual boxes and more. And once it’s planted on your desk, it’s hard to imagine a world in which you could feel monitor envy ever again.

The CRG90’s expanded 1440p vertical resolution and 120Hz refresh rate makes it the ideal ultrawide for gaming and productivity, and a stylish centrepiece for any setup.