With Microsoft announcing the Xbox Series X tech spec on Monday, and shortly followed by a seminar from Sony on the technical details of the PlayStation 5, we now have a quantifiable data on these rival companies’ best laid plans and a rough idea of whereabouts their systems will land in terms of performance. What we factor in just yet, however, is both Sony and Microsoft’s secret herbs and spices blend – that is to say, all that custom silicon they’re brandishing.

I can’t say I’m surprised that both Sony and Microsoft are throwing the word ‘custom’ around a lot this generation. We’ve known for some time that the Xbox Series X and PS5 specs include custom AMD Zen 2 and RDNA 2 silicon. Sure, the configurations are different – the Series X will come with 52 CUs at 1.825GHz to the PS5’s 36 CUs at 2.23GHz – but the core architecture, the core technology and process, are by-and-large identical. That’s also the same tech that is either extant (Zen 2 CPUs) or soon to arrive (RDNA 2 GPUs) for our gaming PCs, too.

So when these two goliaths of gaming technology go head-to-head, PS5 vs. Xbox Series X, in a battle of tech specs, the focus has shifted away from resolutions and frames per second and onto custom processors and specialised silicon. Yet that doesn’t necessarily mean we won’t see any of this proprietary tech headed to our gaming PCs in the near-future – in fact, quite the opposite.

Take, for example, the Series X’s Xbox Velocity Architecture. This cache-busting technology consists of four components: an NVMe SSD, a dedicated hardware decompression block, the DirectStorage API, and Sample Feedback Streaming (SFS). Obviously you don’t need me to tell you that one of those components is already embedded into the PC ecosystem – NVMe drives are ubiquitous across the best SSDs for gaming at this point.

That DirectStorage API, too, is headed for our PCs. Fancy that. As a part of Microsoft’s bundle of DirectX products, the company will be bringing its redesigned I/O system to Windows for all to enjoy.

“Modern games perform asset streaming in the background to continuously load the next parts of the world while you play,” an Xbox blog post reads, “and DirectStorage can reduce the CPU overhead for these I/O operations from multiple cores to taking just a small fraction of a single core – thereby freeing considerable CPU power for the game to spend on areas like better physics or more NPCs in a scene.

“This newest member of the DirectX family is being introduced with the Xbox Series X and we plan to bring it to Windows as well.”

DirectStorage will reduce the CPU overhead required by I/O operations to a fraction of their original demand, leaving more of the Series X’s eight Zen 2 cores free to work on other tasks. The same could be said for a gaming PC, too.

Shifting load away from the CPU will help to remove bottlenecks from an older system, but the reduction in overhead will also allow developers to program titles to make better use of CPU threads going spare.

If we bring concepts to AMD that are felt to be widely useful, then they can be adopted into RDNA 2 and used broadly – including PC GPUs

Similarly, Sampler Feedback Streaming is available on PC today. It’s now a part of the DirectX 12 Ultimate API, which was announced just yesterday, and serves to improve texture streaming (pulling in textures on-demand) and texture-space shading. All of which is helpful for rendering at high resolutions, especially 4K. Support won’t be limited to AMD RDNA 2, either. Nvidia RTX 20-series graphics cards built on the Turing architecture similarly contain the necessary hardware to fully-support the DX12 U specification, which includes DirectX Raytracing 1.0 and 1.1, sampler feedback, mesh shaders, and variable rate shading. Intel’s also touting support for some of those features individually with Intel Xe – it’s a free-for-all.

So that Xbox Velocity Architecture? We’ll be basking in most of those optimisations on PC in the near-future. It’s only the dedicated hardware decompression chip that we’re missing, which similarly reduces CPU usage for decompression tasks by redistributing that operation from the CPU and onto dedicated silicon. That’s absolutely not out of the realms of possibility for CPUs with on-chip (or chiplet) I/O functionality expanding, however. 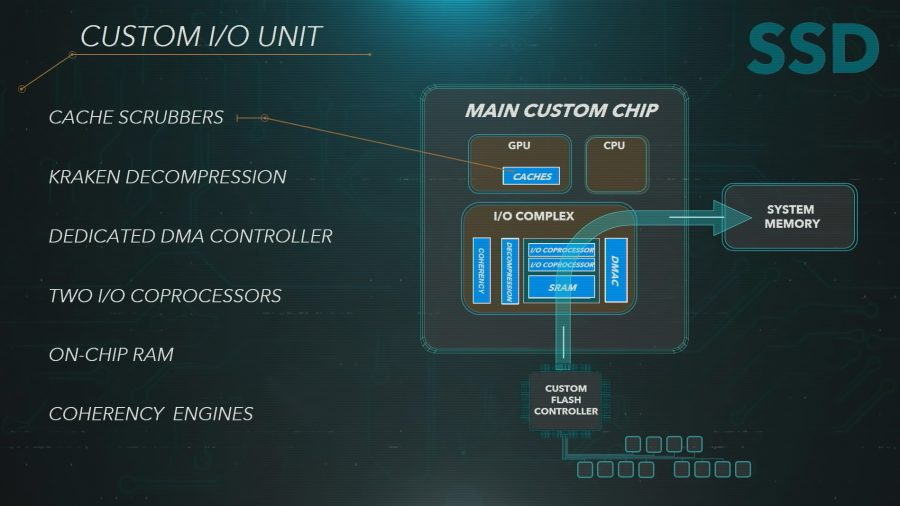 Sony’s integrating the custom decompression chip alongside a dedicated DMA controller, two I/O co-processors, coherency engines, and GPU cache scrubbers. That’s a lot of proprietary tech, but that doesn’t necessarily mean we won’t see some of Sony’s work filter into our gaming PCs.

“AMD is continuously improving and revising their tech,” Mark Cerny, lead system architect for PS5, says. “For RDNA 2, their goals were, roughly speaking, to reduce power consumption by architecting the GPU to put data where it’s needed, to optimise the GPU for performance, and to add a new, more advanced, feature set. But that feature set is malleable, which is to say we have our own needs for PlayStation and that can factor into what the AMD roadmap becomes.

“So collaboration is formed. If we bring concepts to AMD that are felt to be widely useful, then they can be adopted into RDNA 2 and used broadly, including PC GPUs. If the ideas are sufficiently specific to what we’re trying to accomplish, like the GPU cache scrubbers I was talking about, then they end up being just for us. If you see a similar discrete GPU available as a PC card at roughly the same time as we release our console, that means our collaboration with AMD succeeded in producing technology in both worlds. It doesn’t mean we simply incorporated a PC part into our console.”

AMD Zen 2, RDNA 2… what would it take to build a PlayStation 5 for yourself?

All that sounds like a promise of a very similar discrete graphics card filled with at least some of the features Sony outlined during its tech specs deep dive. And all launching at roughly the same time as the PS5 (expected sometime in Q4). Just stay away from Sony’s scrubbers, ya hear!?

So many of those crucial cache, I/O, and storage technologies underpinning both the Xbox Series X and PlayStation 5 performance later this year will make their way over to PC gaming. There’s still that little matter of whether or not developers will opt to program for them across platforms – or at all – but consoles are mighty proposition and a guaranteed audience, so it’s likely more than just Sony and Microsoft’s first-party studios will attempt to integrate during these consoles’ lifetimes.

Onwards to audio. 3D audio engines have become a focus for both console manufacturers with this generation, even more so than with the last. The Xbox Series X will feature a dedicated audio block on-chip intended to power ‘Project Acoustics’, which simulates wave effects in complex geometries to more accurately portray sounds as it would be heard by the human ear in relation to nearby objects.

The PS5’s dedicated audio chip has been outlined in a little more detail, and Sony is focusing on “presence and locality” with its onboard ‘Tempest 3D AudioTech’ algorithms and engine. The hardware block component itself is something that could theoretically be implemented swiftly on PC – even within AMD’s RDNA 2 GPUs. That’s because Sony’s engine is a re-purposed GPU CU. An RDNA 2 compute unit. There’s nothing quite like a modern GPU CU to work on a highly-parallel task. 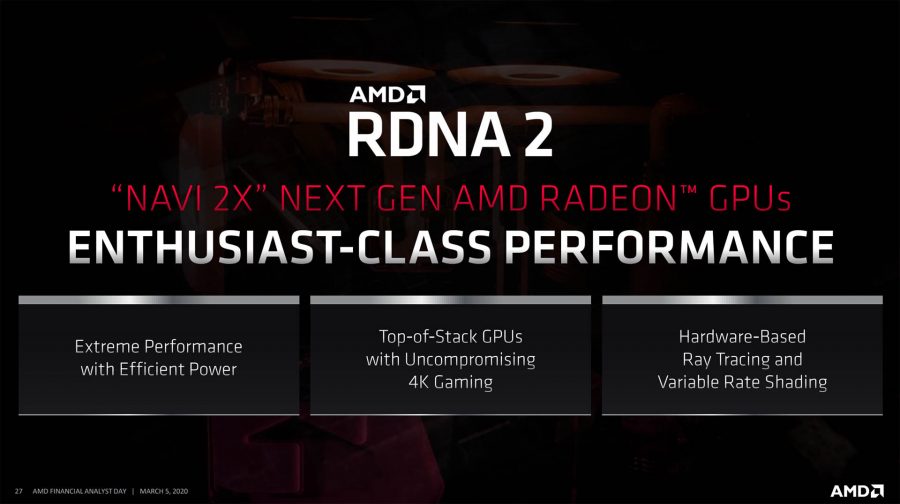 Due to the close collaboration with Sony, we wouldn’t be surprised to see AMD pulling this feature out of the console skunkworks and integrating it into its own discrete GPU product stack with Navi 2X. Cerny was careful to only call the algorithms Sony’s running with Tempest “proprietary”. But let’s also bear in mind that 3D audio engines and HRTF (Head Related Transfer Function) processing are not a new to PC gaming, and are often delivered via software in-game and processed via CPU thread utilisation. A novel hardware integration would rather serve to accelerate 3D and spatial audio processing and remove CPU load, potentially allowing users previously unable to use deeper audio processing to do so.

Both Xbox and Sony have expressed a wish to allow developers to build games and worlds freely and easily across their systems. With DX12 U and Vulkan laying the foundations of that promise with close to the metal programming across the Xbox Series X and PS5 respectively, this console generation could be the most flexible yet. That all serves to help PC gaming, as developers are able to access a much larger, cross-platform, audience with the single stroke of a brush.

With one foot in AMD RDNA 2, and another in proprietary hardware blocks, the next-generation consoles from both Sony and Xbox only serve to raise the bar for gaming performance across the board. That’s also a boon to our rather scalable gaming rigs. It looks like plenty of what’s to come in the PS5 and Xbox Series X is set for a PC debut at some point or another – and who knows what else AMD, and Nvidia, have cooking up for the end of 2020 and heading into 2021.