Playing Control is like taking hallucinogens at the DMV

You’re sat in a generic municipal office waiting to put your John Hancock on some arbitrary paperwork that merely confirms you exist in the system. We’ve all been there. And while you would do it online to save yourself the hassle of trekking half way across the city to some steel and glass postmodernist hackneyed government building, something went wrong. So you’re here, at, let’s say the Passport Office for us Brits, which I can only assume meets its match for user experience in the DMV over the Atlantic.

As you sit there noting down your ceaseless history of rented apartments and chewing on some gum leftover in your pocket from the night before, you start to feel a little… odd. Like your consciousness isn’t inside your person anymore, like time is a fluid concept that your mind no longer adheres to, and you’re now acutely aware of your limbs.

Suddenly your consciousness comes crashing back down to earth, shattering in the realisation that you’ve actually dropped leftover hallucinogens from the night before. And, if you’re being honest, you’re not really in the best mindset for the occasion. Now where that drab waiting room used to be, you’re looking up to a bureaucratic hellscape filled with half-zombie creatures lurching towards you and the apathetic receptionist floating eight foot off the ground, face to the sky, and murmuring a demonic chant.

The closest you’ll get to living this surrealist painting come to life (or so I’d hope) is the grim, ceaselessly bureaucratic world of Control. Between the stapler, desk lamp, and generic watercolours within the Federal Bureau of Control’s halls – the mysterious and hidden-in-plain-sight government department that deals in wicked and wonderful otherworldly oddities – there are hordes of abhorrent super-zombies in slacks (the Hiss) flinging desks, pneumatic capsules, and ring binders at you as they go about ripping open the seams of reality.

Let’s be honest, if any of the world’s governments were to have a secret paranormal department dedicated to seeking out and harnessing strange mythological items of power, it would likely be a horribly boring place to work for humble middle management not privy to the state’s utmost secrets. And it’s the little things within Control that mark the introduction to its contrasting and supernatural world that drive its temporal believability home.

Your journey sees you traversing the pristine hallways and corridors of the FBC (otherwise known as the Oldest House), only to occasionally happen upon a room lit up with mysterious red light and chopped and changed to become, not extraterrestrial per se, but most definitely unnatural. In each room you come across a unique and twisted body double of a familiar office block or lobby, chopped and changed into something darker and more sinister. There’s undoubtedly an air of Mark Z. Danielewski’s House of Leaves about the Bureau.

That change in perception is quickly corrected once an area is cleansed of the Hiss invasion, and all the building blocks put back in place as if nothing was ever awry.

Control’s unsettling familiarity is testament to its superb art direction

Even more familiar to the psychoactive explorer is perhaps the most haunting of all perceptual anomalies: the floor collapsing beneath you. As you patrol the Bureau’s halls, you may find yourself sucked into a vortex into a white space, your only exit across floating platforms of gold marbled granite held still in midair by an otherworldly force.

But it’s not only Control’s art direction that builds its off-kilter world. Littered throughout the Bureau’s federal halls and office blocks you’ll find correspondence, notes, cases, all signs of the Agency’s recent operation. Each note dives into the rich lore, the like of which would be at home in any fantasy RPG. Yet despite the occasional mention of Excalibur here, or haunted merry-go-round there, you’ll find few without comedic redactions, corporate speak (“remember there’s no such thing as too suspicious!”), or interspersed with internal memos complaining about paranormal goings-on. 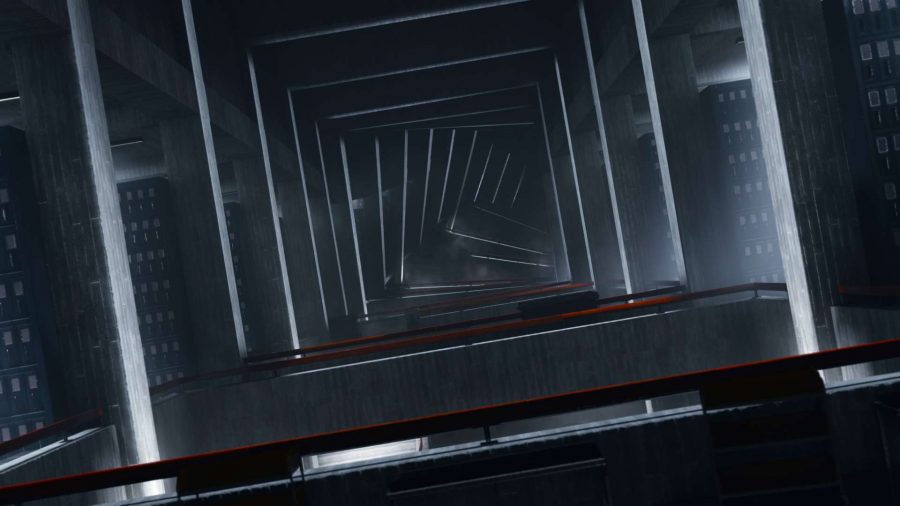 The prose of each correspondence is often pedestrian in tone, completely official, and yet totally bizarre.

Or perhaps a finer example is the interdepartmental complaint regarding the executive restroom that has been “missing for weeks now.” And signed off with the totally mundane request: “if you can’t bring it back, at least find out where it went.” 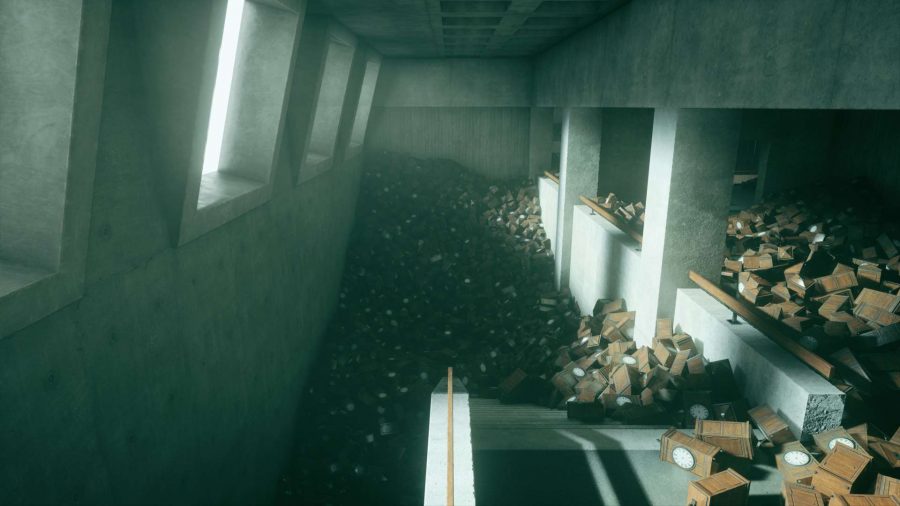 A large part of the psychotropic charm of Control is generated through the very human, mundane stories beneath the surface of this otherwise transcendental world, which keep it grounded to a very relatable, albeit synthetically manufactured, human experience. It’s a wonderfully crafted game, and Control’s unsettling familiarity is testament to its superb art direction – evident from concept art all the way to the final product.

From Control’s 1970s decorum to its clever, quick-witted correspondence between the Agency’s staff, which serves to flesh out the mundane office life subverted by the pressing Hiss invasion, it’s a world you’ll be desperate to discover more of. Not only that, its fantastical surrealist world, ripped straight from the artwork of M.C. Escher, stands as proof that an ostensibly mundane setting needn’t limit the scope of anyone’s imagination.

But maybe lay off the drugs before playing this one. It’s trippy enough already.