Planet Zoo is the zoo creation simulator we’ve been waiting for since the last Zoo Tycoon, combining a fully-fledged animal acquisition and management platform with a deep business maintenance simulation. With a deep campaign and a well-crafted online or offline zoo creation simulator, it allows you to create the zoos you want to create without being obtuse. It offers seemingly infinite possibilities in its design for your zoos, though it never borders on being overwhelming, which makes it great for both creators and animal lovers. Building on the successes of Planet Coaster, Planet Zoo creates a zoo simulator that successfully honors and improves the legacy that Zoo Tycoon created to bring the genre into a new era.

Planet Zoo gives you full control over the creation, improvement, and long-term management of zoos that can be located in a variety of different settings and contain hundreds of different animals. While starting off can be a bit of a slow process, as it is in many games in the sim genre, Planet Zoo offers you the option of starting from scratch on your own personal zoo or jumping into the campaign, where you’ll have guidance and some structure for your zoo-building endeavors.

The campaign walks you through every detail you’ll need to know for your zoos in a clear and easy to learn way that seamlessly teaches you the complicated process of maintaining and building the zoos. While the guides that tell you what you’ll need to do next can get a bit long-winded, it offers a lot of content throughout its twelve main missions that will put you through each step of the zoo simulation process and expose you to all different types of animals and environments. 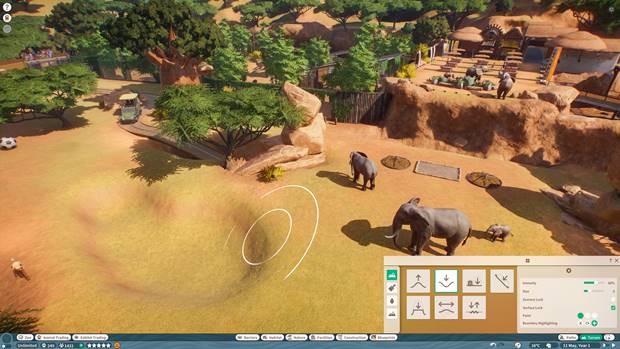 “Running the business works very similarly to how it did in Planet Coaster, though some of the more frustrating aspects have been improved.”

Once you’ve completed the campaign, or you just want to expand outside the campaign’s structure, you can build your own zoo from scratch, which you can do either online or offline. It’s a nice touch that the online experience is not required, though it does offer nice benefits like animal trading and the ability to visit other players’ zoos. As you’re building your zoos, your effort will be split between making sure your zoo is running as a successful business for its guests and acquiring, maintaining, and releasing your animals.

Running the business works very similarly to how it did in Planet Coaster, though some of the more frustrating aspects have been improved. Your goal is to bring as many guests into the zoo as possible and either make enough money to just keep going or make as much money as possible, depending on your personal motivations.

Animal habitats and exhibits are obviously the most important part of guest satisfaction, so you’ll be tasked with making your zoo have the best combination of animals so that guests will have enough to see but won’t be overwhelmed. Alongside this, your guests will want to be educated and fed, so they want to be able to go to food and drink shops and info stands and listen to educational factoids about a specific animal they’re viewing. Some highly desirable animals will bring in enough guests to sustain you in the short-term, but if you can’t nail the customer experience, your guests will start to leave.

The game is well-balanced on this front, though some of it is a little boiled down. While your expenses, such as the ones you’ll pay to your staff or the taxes on your property, will obviously increase as you play, the game doesn’t want to punish you for focusing more on the animals than on the business. The amount that guests will leave decreases significantly slower, even with terrible zoo conditions, than the amount in which guests increase with, say, a big new animal or facility.

And, unlike reality, when it comes to staff members like security guards, though lacking them can allow for some protests, it won’t have a big enough impact on your business until you’ve grown significantly to warrant hiring. With that said, getting your zoo to run like a well-oiled machine is as satisfying as ever, and maintaining it is never as much of a chore as it could have been. 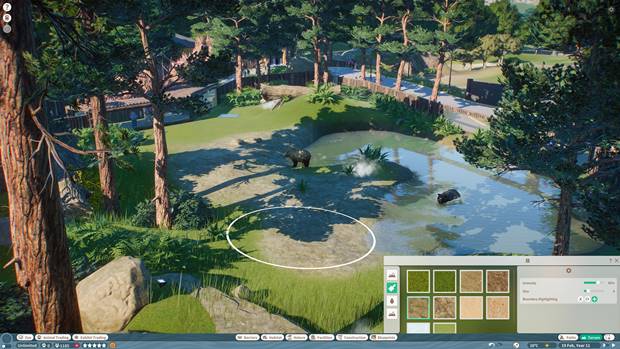 “I found myself repeatedly clicking through menu after menu to find almost anything I needed, even if I had already done it before. They could have been more streamlined to tell you, for example, which animals I already have in the park on the same screen as the animal market, instead of having to flip back and forth between the zoo’s ledger.”

There’s a lot more emphasis, then, on the animal aspects of the zoo business, which has a lot more detail and is where the most enjoyable parts of the game are. You can buy large animals through the animal trading market or smaller ones through the exhibit trading market, and keeping all of your animals happy and healthy is crucial to creating both a successful and conservation-friendly zoo. Guests are keen on noticing when animals are overcrowded or uncomfortable and will comment or even boycott if animals are not treated well, which forces you to focus on creating acceptable environments for the animals. Each animal has specific needs for their environment, such as space in a habitat, terrain, and temperature, and, though the factors that go into animal welfare are numerous and wide-ranging, they are summarized well in the animal-specific information boxes that clearly tell you what’s wrong.

Animals have complex AI that make them act much more realistically than in previous Zoo Tycoon games, such as animals fighting for alpha status or experiencing stress because they feel too exposed to guests in the park. They’re also liable to escape from unprotected or damaged habitats if they are not maintained. Once you get them to an appropriate age and health status, the game tells you, your ultimate goal is to release them into the wild and act as the conservationist you are, which will in turn give you conservation points to adopt more animals. While only the most important and endangered animals will give you any significant number of conservation points, it’s a worthy end goal for a game simulating a controversial real-life topic.

Within the zoo, any time virtually anything is going wrong, the game will notify you as to what’s going wrong and how you should react to it. There are alerts all over the UI as to if you are gaining or losing guests or money and how to solve those problems that are popping up around the park. Unfortunately, the UI outside of this is cluttered and difficult to navigate, especially when you’re looking for one specific item or for a particular action.

I found myself repeatedly clicking through menu after menu to find almost anything I needed, even if I had already done it before. They could have been more streamlined to tell you, for example, which animals I already have in the park on the same screen as the animal market, instead of having to flip back and forth between the zoo’s ledger. Apart from the UI, though, the game is generally really well-detailed, especially when you’re able to go into the animal’s view and watch them roam around their environment. It was always a pleasure to sit back and watch everything in action and visualize the work you’ve put into the zoo, even if there was nothing pressing to fix or adjust. 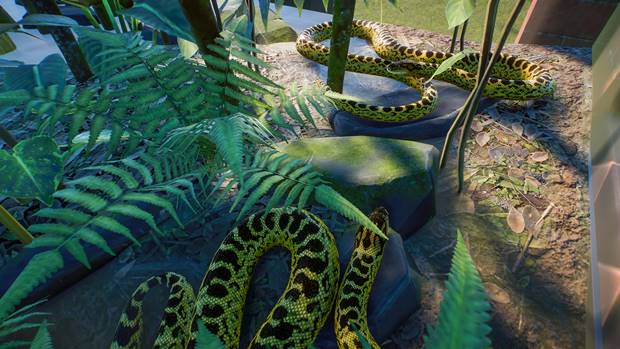 “Even when I felt challenged in Planet Zoo, either in the campaign or building my own zoo, I never felt overwhelmed because it gives just the right amount of assistance to let you get it running on your own.”

Planet Zoo takes what made both Zoo Tycoon and Planet Coaster special and melds them into a package that both honors past zoo creation simulators and brings the genre into a more modern perspective. Though the business aspect can hold your hand from time to time, it strikes a nice balance between making sure the business runs as it’s meant to and making sure the animals are healthy and happy before they can be released to the wild.

Even when I felt challenged in Planet Zoo, either in the campaign or building my own zoo, I never felt overwhelmed because it gives just the right amount of assistance to let you get it running on your own. Though the zoo simulation genre has been dying off since Zoo Tycoon, Planet Zoo makes sure it’s not going extinct just yet.

This game was reviewed on the PC.

Planet Zoo is a worthy spiritual successor to Zoo Tycoon and makes improvements in virtually every area to bring the genre into a new generation.

Wasteland 3 will launch in spring 2020