You may call it a TV feigning gaming monitor status, but over here at PCGamesN we call the Philips Momentum 326M6VJRMB a top gaming monitor worthy of your attention if you’re teetering on taking the plunge into 4K.

But let’s set the record straight before we get into gritty details. For all the positivity that may come across in the later passages of this here review, what in the heck is going on with that name? It’s convoluted by even monitor naming standards, and to the average consumer it might as well be Wingdings. But, credit where credit’s due, I’m sure it’s incredibly telling of what to expect from this monitor – so long as you work for Philips.

With that out the way, here’s what you can expect from the (CTRL-V) 326M6VJRM, and I can tell you that ‘32’ stands for 32-inches. Crazy, right? We recently took a look at the 43-inch Philips Momentum 436M6VBPAB, a similar HDR gaming monitor that delivers rather stunning 4K visuals across its colossal TV-size panel, and the panel within today’s model is more or less a cut-down version without all of the HDR gubbins in the rear.

Both are intended for the console audience, hence the colossal panel intended to be viewed from a distance, but even for PC gamers up close and personal to their monitor the 32-inch panel of the 326M- Philips Momentum has some benefits over 27-inch 4K fare.

At 32-inches you’re truly experiencing just about the best 4K can offer. There’s a sweet spot somewhere between too large for a desk and too small to make the most of the increased detail and clarity on offer, and the Philips Momentum just about hits the nail on the head. There’s enough real estate on offer to accentuate the crisp details within high resolution textures – so long as the devs put them there – and it doesn’t suffer from a noticeably low pixel density when viewed a little closer than intended – like say, on a PC gamers desk. It’s rated to 140 PPI, a little better than the 43-inch version’s 103.64 PPI.

The panel within is built upon MVA tech, a blend of TN’s speedy response times and IPS’ fidelity that’s not quite as good as either. Life’s all about compromises, and the VA panel within the 326M6VJRM offers an attractive blend of 4ms response times, 60Hz refresh rate, and solid colour representation.

And while 60Hz is a little pedestrian for most gaming monitors nowadays, few, if any, graphics cards are capable of pushing the pixels required to make the most of a higher refresh rate panel at 4K resolution. The decision all comes down to whether you prefer sharpness and clarity over silky smooth gaming, and if the latter is more your concern then a 1440p panel with a higher refresh rate will likely be a better fit for your needs. And at least the 326M6VJRMB’s Adaptive Sync functionality keeps everything as smooth as possible.

Black levels were decent in range, if a little muddied in the mids, yet the MVA panel within strikes a decent level of white saturation across the board. The panel’s peak luminance of 600cd/m2 is also well-suited to a half-decent HDR600 implementation. And that’s saying something by today’s rather low PC HDR watermark.

The HDR implementation can suffer a little at the lack of overall vibrancy, and this model isn’t equipped with FALD local dimming, so you can see HDR fall over itself in some high-contrast scenes. Yet for most games the HDR experience was relatively painless to implement and the end result was genuinely a better viewing experience – so good marks here. 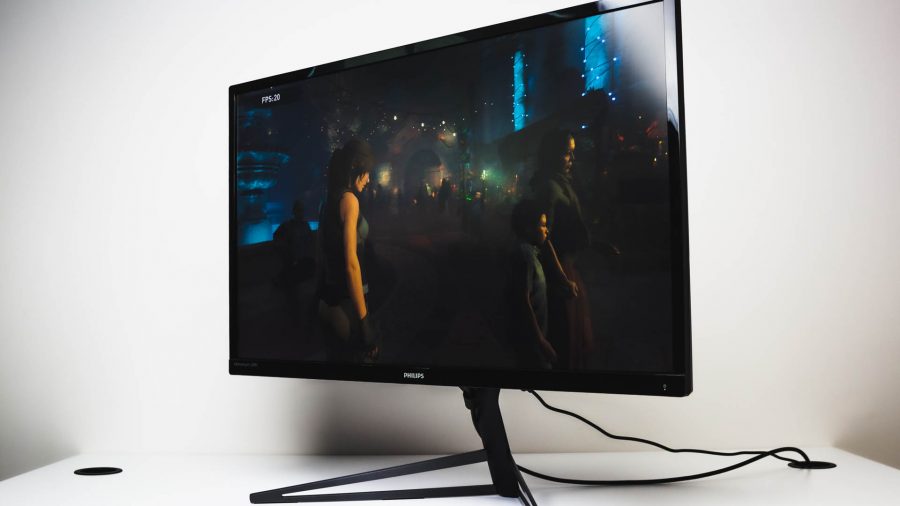 As for the overall package, the monitor comes with a decent, smart stand that tilt and height adjustment, and is fitted with three HDMI 2.0 connections, and a single DisplayPort. Another DisplayPort would offer a little more flexibility on PC with PBP, but the console/TV market would argue otherwise. There’s also four USB 3.0 ports, and both in and out 3.5mm audio jacks, the former connected to dual 5W speakers.

With a £554 price tag the Philips Momentum 326M6VJRMB is a solid buy, and one that will easily see you through at least one GPU generation – and perhaps the next will see 4K gaming truly within reach in the mainstream. And if PC HDR finally does take off (although we’re not holding our breath), the 326M6VJRMB is well-placed to make the most of it with decent HDR 600 support.

But there’s a rather big spanner in the works for the 326M6VJRMB, and that’s the larger, and slightly better equipped for HDR, Philips Momentum 436M6VBPAB. With HDR1000 support and more real estate for £500 (yep, cheaper) it’s by far the better buy for a lasting 4K gaming experience while that deal lasts. Still, both offer the same thing at their core, and that’s visual fidelity and performance that you can trust to outlast your current gaming machine.

Oh and did I mention both Momentum monitors come with Philips’ own Ambiglow lighting? If that’s not selling you on these gaming monitors I don’t know what else will.

While otherwise a fantastic 4K gaming monitor, the 326M6VJRMB has been totally scuppered by a sale on the larger, and better, Philips Momentum 436M6VBPAB.

Calling And Taking The Shots From Above In Disintegration's Multiplayer