Perfunctory. That’s the one word which keeps bubbling to the surface as I marshal my feelings about the Nvidia RTX 2080 Super. On the one hand its very existence is thoroughly pleasing, but where the impressive RTX 2070 Super feels like a genuine upgrade over the original 2070, this RTX 2080 Super, welcome as it is, is a far more iterative, purely functional update. Perfunctory, see?

That’s arguably a matter of necessity, however. Nvidia is facing some stiff competition in the high-performance graphics card market for the first time in a long time, where the AMD RX 5700 XT has been priced aggressively – and, if you believe AMD’s Scott Herkelman, very tactically – against the middle tier of the GeForce RTX cards. And so the RTX 2070 Super has had to be, well, Super to beat it. To that end it uses a completely different GPU to its forebear while retaining the same basic MSRP.

The RTX 2080 Super, on the other hand, doesn’t really have anything to go up against. There’s no AMD RX 5900 to give it cause for concern, and therefore nothing to really have its price/performance metrics measured against. Apart from its own GeForce progenitor, the OG RTX 2080, that is.

You could argue then that the RTX 2080 Super doesn’t really need to exist at all, which means you have to give kudos to Nvidia for essentially giving us something for nothing. Well, $699 isn’t exactly nothing, but when this is the same price as the MSRP of the base RTX 2080, and $100 cheaper than the previous Founders Edition, while also delivering consistently higher gaming performance than either, you can see what I mean.

Nvidia doesn’t need to give us perfect Turing TU104 GPUs for $1,400 less than they cost inside the similarly specced RTX Quadro 5000 cards, and yet I’m sitting here with the RTX 2080 Super and still feeling a little underwhelmed. Now, it’s either that I’m just another over-indulged, self-entitled journalist, or maybe the RTX 2070 Super has changed the high-end market and we now expect a little more when we make the step up the graphics card ladder.

What are the Nvidia RTX 2080 Super specs?

As I said earlier, Nvidia is giving us perfect TU104 GPUs with the new RTX 2080 Super, and by that I mean the graphics silicon at its heart is using the full extent of the Turing chip’s potential power. Where the original RTX 2080’s TU104 GPU was restricted to 2,944 CUDA cores, the RTX 2080 Super comes with all 3,072 CUDA cores in play across its 48 SMs.

That’s two more than the OG 2080, which necessarily means that the new card also comes with another two RT Cores, and therefore another 16 Tensor Cores, because of the way the Turing architecture has been built. That’s not going to massively alter the real-time ray tracing performance of the new RTX 2080 Super, but it does mean there’s no DXR performance left on the factory floor this time. And it also means there’s no faster card for ray tracing this side of $1,000.

The new chip has, like its other Super brethren, also been clocked higher than the previous generation of RTX GPUs. Here you’re looking at the RTX 2080 Super coming out with a boost clock of 1,815MHz as opposed to the OG 2080’s 1,710MHz boost. 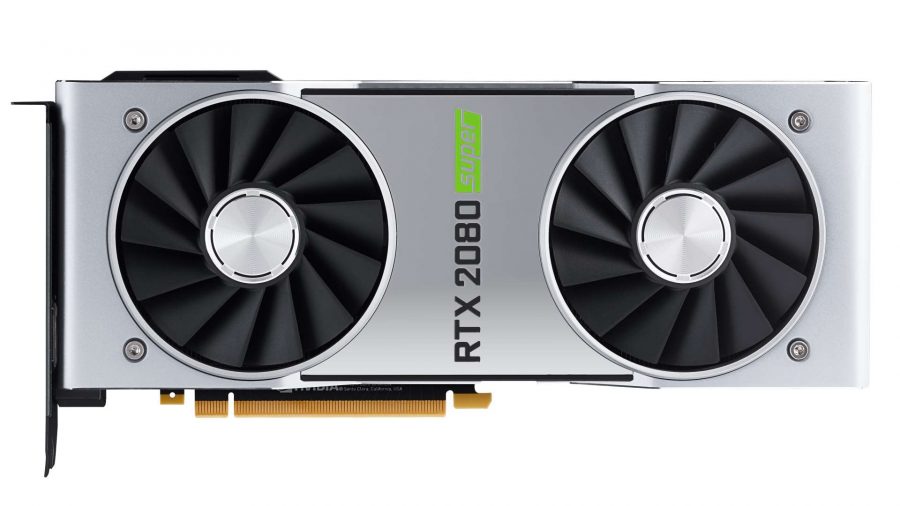 As always that doesn’t tell the whole story because Nvidia always likes to make you think you’re getting a little more than advertised – during our testing the RTX 2080 Super’s GPU ended up moving between 1,920 – 1,935MHz under gaming loads. That’s quite a bit above the rated boost clock and comes courtesy of the Nvidia’s GPUs ability to push their operating frequencies as far as possible within the bounds of thermal and power envelopes.

Potentially the biggest change between the RTX 2080 and its new Super replacement is the use of 15.5Gbps GDDR6 instead of the 14Gbps version all the other RTX cards use, including the hyper-expensive RTX 2080 Ti. On the original Founders Edition cards Nvidia seemed to only be using Micron GDDR6 but with this RTX 2080 Super we’ve got Samsung taking care of the video memory duties.

Considering we could bump the Micron memory on the RTX 2070 Super up above 15.5Gbps with a little light overclocking, and the change barely registered in-game, it’s maybe not that big of a switch in terms of actual performance.

But, like the other RTX Super cards, Nvidia has mercifully ditched the Founders Edition tax here. The original RTX 2080 FE featured a factory overclocked GPU, which at least gave it a semblance of reason behind the higher $799 price tag, but the new RTX 2080 Super is faster than the OC OG and its Founders Edition (read: reference card) retails for the standard $699 MSRP.

And that means this is a direct replacement for the original 2080 card – in fact the only non-Super RTX card still with a place in Nvidia’s revised stack is the RTX 2060, and I do question what the value of keeping it around is given the price cuts of the AMD RX 5700-series cards and what that’s done to the lowest rung of the RTX ladder. 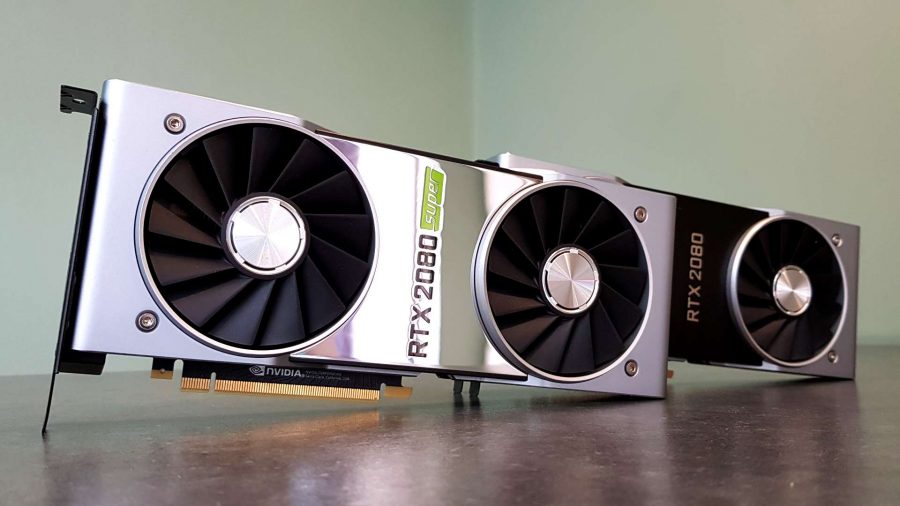 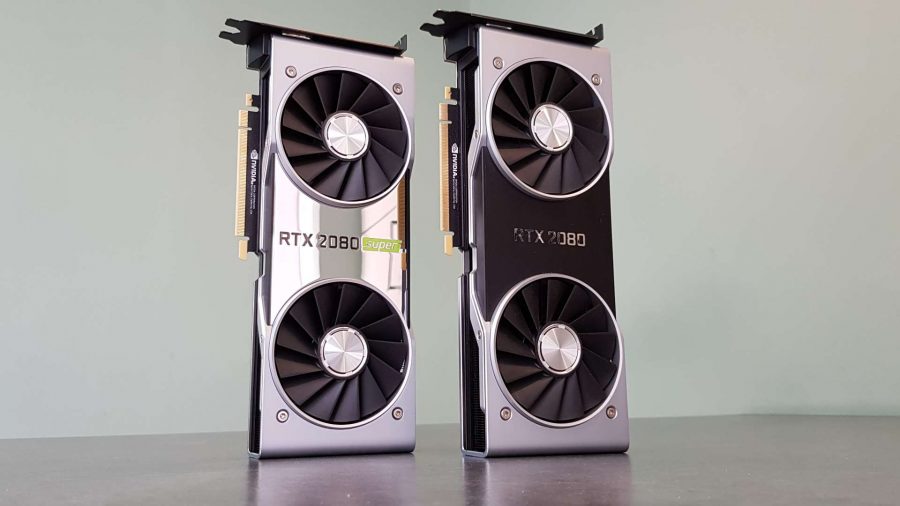 The RTX 2080 Super is faster than the RTX 2080. That ought to be a given considering we’re talking about a higher-clocked chip with more of everything inside it, as well as one with some speedier high-spec graphics memory attached to it. But it’s the actual performance delta between the two cards which is the interesting thing.

At the most we’re talking 7% faster at the highest 1440p settings, and at the other end of the scale that’s down to just 2%, which is getting into the realms of statistical variance rather than a definitive performance lead. On average we’re looking at around a 5% delta between the straight 2080 Founders Edition and the Super card.

It only gets a little hotter than the slightly cut-down, though moderately overclocked original, and draws only a little extra juice from the wall. Though is still a good chunk less power-hungry than the demonstrably slower GTX 1080 Ti.

And honestly, that’s all Nvidia has promised with the RTX 2080 Super. This hasn’t been created as a game-changing graphics card release, just a GPU that’s almost the logical extension of the current Super strategy. So we shouldn’t be surprised that the performance jump isn’t that great compared with the RTX 2080. 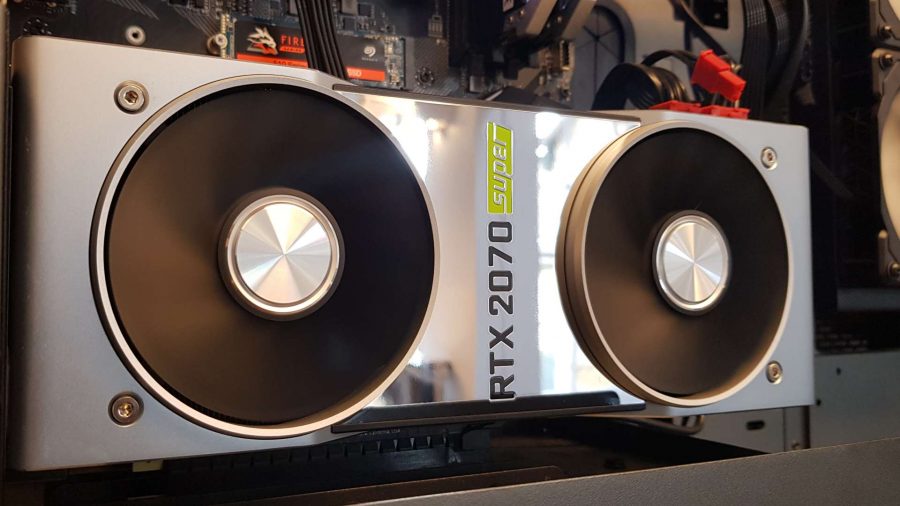 But what about the RTX 2070 Super and the RX 5700 XT? Obviously the RTX 2080 Super is faster than both, but considering there is a 40% difference in price between the two RTX Super cards, and a massive 75% difference compared with the Navi-based Radeon card, the frame rate delta isn’t that great.

Again, taking the highest 1440p settings as representative, the biggest delta between the two GeForce GPUs is 14% and the lowest just 6%. That 14% could sound like a decent uptick in performance, but in reality that’s just a change from running at 85fps to 97fps in Shadow of the Tomb Raider, and that’s not a perf boost that, to me, which warrants spending another $200 to get.

3DMark aside, the latest Tomb Raider game is where the biggest performance difference exists between the RTX 2080 Super and the RX 5700 XT too. At 23%, or 18fps faster that looks like a pretty big chunk of extra fps fun from the GeForce GPU, but in raw numbers that still only equates to a change from 79fps to 97fps. For $300.

And, despite the fact that we are talking about a more forward-looking and efficient 12nm GPU than AMD’s 7nm chip, don’t think you’re going to be able to extend that lead through any overclocking magic. The RTX 2080 Super is already clocked higher than the factory overclocked Founders Edition RTX 2080, so you’re not going to get a lot extra out of this packed TU104 chip. Our reference Super card offered an average overclock of around 40MHz after going through all its OC Scanner algorithmic voltage-testing fun. And that offered, at absolute best, another 4fps. Strong. 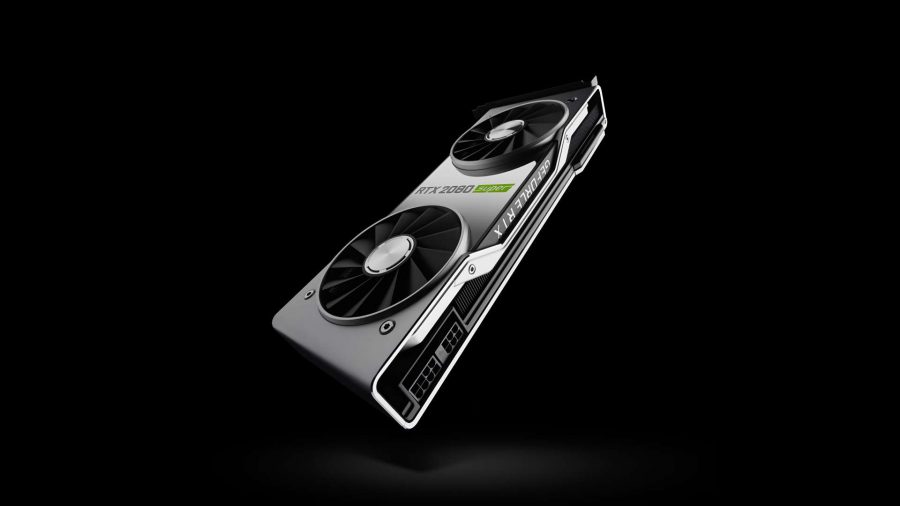 With no direct competition at this level Nvidia doesn’t need to release the RTX 2080 Super, but I have to give kudos to the fact that it has. The green team has created a faster version of the previous card but isn’t actually asking any more money for the privilege, and that is almost uncharacteristically charitable. In fact, compared with the original price of the RTX 2080 Founders Edition it’s nominally $100 cheaper.

It’s also interesting that, without any pressure on it to do so, Nvidia is giving us perfect TU104 GPUs for a lot less cash than the $2,000 RTX Quadro 5000 cards. Sure, you get double the memory on the pro cards, and a different level of support, but we’re still talking about the same GPU silicon. It surely highlights how good the 12nm yields are with Turing if Nvidia’s foundry partners can make enough fully functional, high-clocked chips to fit into the RTX 2080 Super, with the RTX 2070 Super looking after the rest.

The struggle is that even at its $699 base MSRP the RTX 2080 has always seemed like an expensive graphics card. And not in that ‘enthusiast GPUs are all stupidly priced’ kind of way, either. For all that Nvidia would like you to compare it, generation-on-generation, against the old GTX 1080, in reality the RTX 2080 was always the Turing successor to the GTX 1080 Ti. It’s essentially the same price and pretty much just gives us the same level of gaming performance.

The argument has always been that the added bonus of DXR/RTX ray tracing, with the AI-powered DLSS feature, gives the Turing cards that little bit of extra perceived value compared with the Pascal generation of GPUs. But that’s hard to parse when most games you’ll be playing today won’t activate any of that extra RTX silicon.

And that’s all been compounded by the release of the RTX 2070 Super. Using the same GPU as both the RTX 2080 and its Super replacement, the RTX 2070 Super sometimes outperforms the old GTX 1080 Ti and does it for $200 less than the Pascal card’s original asking price. That’s what you want from a gen-on-gen evolution.

That also puts it close to this RTX 2080 Super in performance too… to the point where I’d struggle to recommend you spend the extra cash over the RTX 2070 Super. That said, if do you want to future-proof your rig with the top-spec ray tracing capable graphics card, without having to spend over a grand on the borderline absurd RTX 2080 Ti, then this is 100% the best card for you.

It might become easier to make the case for the RTX 2080 Super over time given the groundswell of RTX-supporting titles spilling out of E3, and potentially Gamescom next month too. With the new ray tracing consoles coming out next year, the number of compatible games using the fancy lighting effects will only increase, and you’ll definitely need a capable GPU to cope with their demands. We’re looking at you Cyberpunk.

For now, when we’re talking about purestrain rasterised rendering performance for games, the RTX 2070 Super is arguably the Turing card that we’d recommend today. It’s got that price/performance sweet spot, though is itself being put under increasing pressure by AMD’s RX 5700 XT. The ephemeral lure of future ray tracing performance does stifle the Radeon’s promise somewhat, and that’s where the RTX 2080 Super is going to hope there’s enough interest to make its superior DXR performance worth the money.

Join the conversation about the RTX 2080 Super. Is it the ideal ray tracing card for gamers, or not enough over the RTX 2070? Have your say on the review’s Facebook and Twitter threads.

The RTX 2080 Super retires the original card, offering higher performance and kills Founders Edition tax. But, while it is the best card for real time ray tracing outside of the absurdly expensive RTX 2080 Ti, the comparative price/performance of the RTX 2070 Super is tough to beat.