If the Nvidia RTX 2060 Super had launched at the same price as the original 2060 the AMD RX 5700 XT getting a serious price cut wouldn’t have mattered so much. But at its current price there’s not really a lot to recommend it over the first Radeon Navi card. And now the full potential of the RX 5700 has been uncovered, it’s got no chance…

Before the red team could get its new GPUs out the door, the RTX 2060 Super followed hot on the heels of the mighty impressive RTX 2070 Super. That new Turing card offers GTX 1080 Ti beating gaming performance at a price point which makes the 20-series the GPU range we’d always hoped it would be at launch.

But AMD’s reaction to the new Super cards is such that this new RTX 2060 Super now finds itself sandwiched between a pair of Navi GPUs in the Radeon RX 5700 XT and the slightly cut-down RX 5700 in terms of both price and performance. The changing of Nvidia’s pricing strategy with the new Super cards – upping the gaming performance, retiring a set of cards and its Founders Edition tax – meant that AMD had to slash the pricing of its new Navi GPUs pre-launch else risk them under-performing at their previous price points.

The RTX 2060 Super is in a different situation compared with the other Super cards released this month. Both the RTX 2070 Super, launching on July 9, and the RTX 2080 Super, hitting the shelves on July 23, will replace their erstwhile non-Super siblings, but the RTX 2060 remains propping up the Turing stack alongside this superior Super version. That means Nvidia can point to an RTX range that covers five separate cards and expands the reach of its real-time ray tracing capabilities.

Though there is only a very modest $50 difference between the RTX 2060 and the RTX 2060 Super, which feels a little odd given that the newer card is actually capable of a lot more than its silicon progenitor. But the OG 2060 is sticking around at the bottom seemingly more for appearance’s sake than out of necessity, because we’d really struggle to recommend the base version over the impressive new Super card.

And now the RX 5700 is on the seen at the same price point as the RTX 2060 and comfortably beats it in gaming terms, AMD has essentially taken it upon itself to retire the lowest-spec RTX card.

The Nvidia Turing architecture is very much a known quantity at this point. The RTX spin on the GPU tech is the one which comes with all the Tensor and RT core hardware that enables those shiny real-time ray tracing effects in select games. And there are a growing number of those, especially after seeing all the new titles supporting Microsoft’s DirectX Raytracing API and Nvidia’s RTX technologies. To get a full breakdown of what the architecture is capable of, and how it’s been designed, check out our Nvidia Turing GPU design feature. Shameless plug. It’s interesting. Honest.

The actual GPU specs of the RTX 2060 Super are all very familiar then, which means we’re still looking at the same TU106 GPU the original version of the card shipped with after all. But Nvidia has opened up a lot more of the potential performance of that chip. 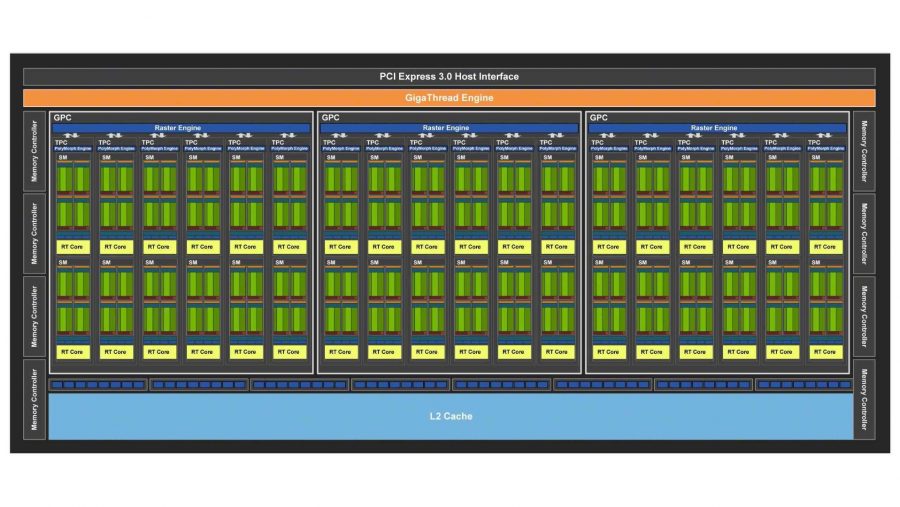 The inaugural RTX 2070 uses the full-fat version of the TU106, while the OG 2060 uses a cut-down version that slices out six SMs and therefore 384 CUDA cores. This Super edition, however, is a lot closer to the specs of the RTX 2070, utilising 36 CUs and sporting 2,176 CUDA cores. It also gets 64 render output units (ROPs) giving it a little more throughput at the back end too.

That also means it has more dedicated ray tracing silicon attached to it too, with a rating of 6 Giga Rays per second; the same rating the RTX 2070 has. Though where the RTX 2070 Super has a fairly hefty clock speed advantage over its non-Super brethren it’s actually the opposite with the RTX 2060 Super. The base clock may have been given a 105MHz bump, but the boost clock is actually rated at 30MHz lower.

Though, in all honesty, those ratings are about as reliable as a classic British motorbike, because the actual GPU frequencies you’ll see when you’re gaming bear almost no resemblance to either base or boost clock speed. In our testing the RTX 2060 Super actually offered slightly higher peak clock speeds than its standard RTX 2060 competition. Our reference cards ran at between 1,835MHz and 1,875MHz on the Super and between 1,830MHz and 1,860MHz on the standard edition.

But the upgraded GPU isn’t the only reason we’re looking at this latest card as more of an RTX 2070 Lite than an upgraded RTX 2060. Nvidia has also revamped the memory subsystem for the Super edition, bringing it up to the same level as both the RTX 2070 and the RTX 2080. That means the RTX 2060 Super comes with 8GB GDDR6 as standard, using an aggregated 256-bit memory bus too. The original card was only fitted out with 6GB GDDR6 and a 192-bit bus by contrast. 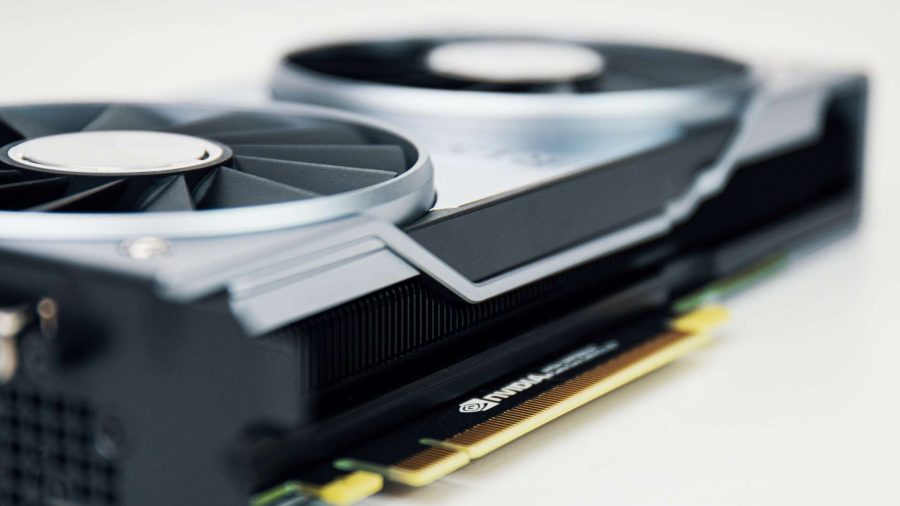 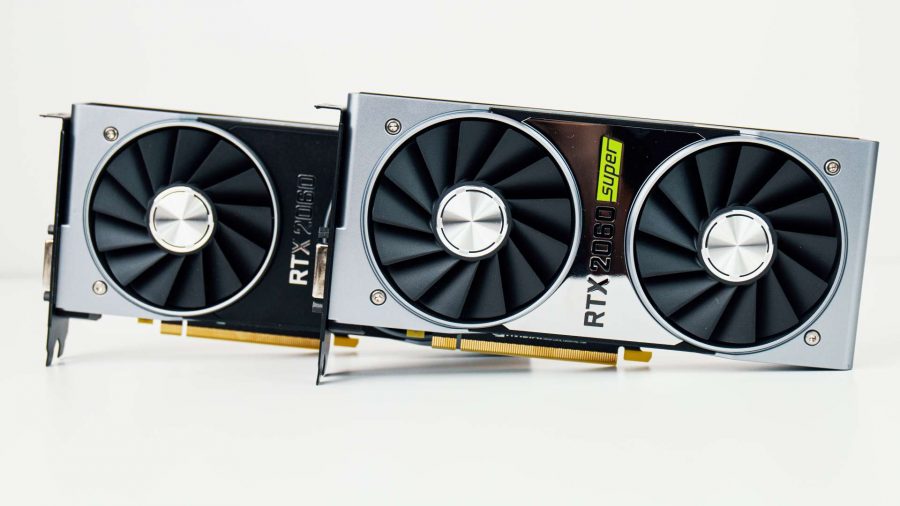 If you spend your time gaming at 1080p then looking at the relative performance numbers between the RTX 2060 and its new Super sibling might have you wondering what the benefit of dropping an extra $50 on the latest card actually is. Sure, you do get higher gaming performance but it’s only ever in the single digit percentage stakes, or low teens.

In fact if you look at the performance delta between these two cards in the Far Cry New Dawn DX11 test then the 1080p difference is just 3%. That doesn’t make for great reading, and wouldn’t have me rushing out to pick up this $399 card.

But it’s when you start shifting your focus to 1440p gaming that the much-improved memory system comes into play. Suddenly the performance difference gets a whole lot wider, and with F1 2019 you see the gap stretch to a hefty 23%.

The RTX 2060 Super pushes into RTX 2070 gaming territory, and you can see exactly why Nvidia has had to effectively retire both the standard RTX 2070 and 2080 cards – they just can’t compete with anything so Super. What that also means is the RTX 2060 Super is now offering GTX 1080 levels of gaming performance, effectively what it should have been doing from the start.

It’s easy to get bogged down in the naming schemes, where the RTX 2060 looks like it should be sitting in the same GPU tier as the GTX 1060 before it… in fact that’s still how Nvidia likes to position the two cards. But realistically, with the bumped up pricing, Nvidia actually pushed the RTX 2060 into the same pricing bracket as the GTX 1070. And on a generation-to-generation cadence you’d expect something at that GTX 1070 level to subsequently deliver GTX 1080 performance in the next generation.

That’s not quite what happened at the beginning of Turing, but that’s changing with this new RTX 2060 Super.

Which all looks great for the new Super card. What doesn’t look so great is that the RX 5700 XT has rocked up at the same price, but with gaming performance that gets mighty close to a GTX 1080 Ti and therefore an RTX 2070 Super. Sure, the AMD card is running far hotter, is much, much louder, and chugs down more power to get there, but in straight frame rate terms it’s an unreserved win for the red team.

You do, of course, gain access to the real-time ray tracing VIP lounge with the RTX Turing cards, and the 2060 Super has more headroom to close the gap between it and the new Navi card too. But few people ever bother to overclock their GPUs so for many of us we just want a card that will perform out of the box – and the identically priced RX 5700 XT will certainly do that. 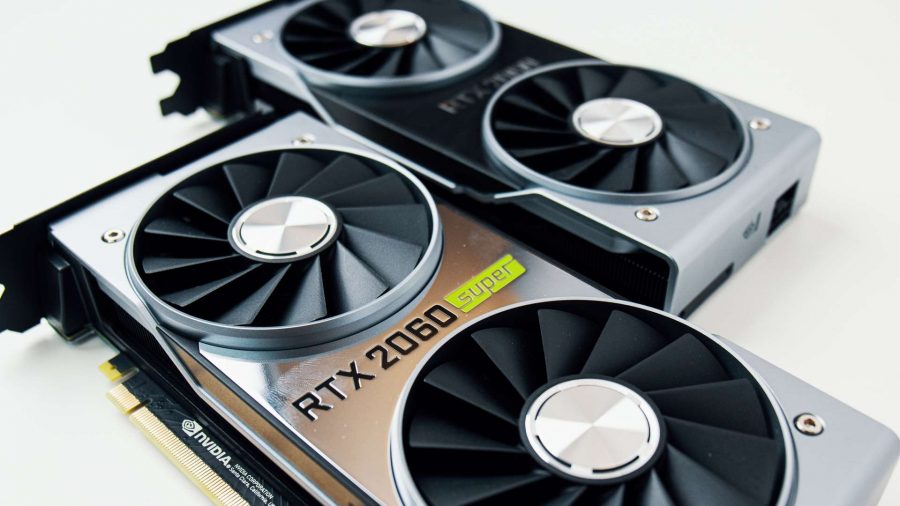 Ignoring the latest Navi release the RTX 2060 Super looks like a super-good graphics card. It delivers GTX 1080, and almost RTX 2070, levels of gaming performance, and all for a less onerous sticker price than the first Turing chip shot.

But we can’t ignore Navi, because the pre-release price cuts have made the Radeon RX 5700 XT an incredibly good-value gaming GPU. At $399 it’s offering performance that tops this RTX 2060 Super, and gets mighty close to the RTX 2070 Super.

And that means the RTX 2060 Super suddenly looks rather more pedestrian alongside it. And this $350 – $399 price category is also looking rather crowded now with the RTX 2060 and its Super variant being picked apart by the RX 5700-series.

Keeping the OG 2060 around and launching the Super card at a higher price point is now looking like a bit of a misstep on Nvidia’s behalf. Had it followed suit with the 2070 and 2080 Super refreshes and retired the original card while occupying its $350 price point it would outpunch the RX 5700 and undercut the RX 5700 XT.

Then being able to point to its real-time ray tracing heritage and the latent AI power at its behest would be more of a convincing argument. As it is you’re left trying to convince people that the RTX feature set is worth buying over the RX 5700 XT’s superior rasterised gaming performance. And that’s a tough sell right now without a real talismanic, must-play game making ray tracing support feel vital.

Nvidia is likely to stay firm with its RTX 2060 Super pricing in the short term, touting its future-looking GPUs as more relevant to gamers than AMD’s more traditional approach, but to fend off the mighty 5700 XT Nvidia’s going to need to retire the straight RTX 2060 and drop the Super down into the same price point.

With the RX 5700 XT swooping in at the same price, but with superior gaming performance, the new RTX 2060 Super looks like it’s in a bit of a bind. Keeping the OG 2060 around now looks like a misstep for Nvidia, as AMD’s Navi cards are putting the squeeze on the low-level RTX cards.

WWE 2K20 Guide – How To Unlock All Arenas, Championships And Wrestlers

WWE 2K20 Guide – How To Unlock All Arenas, Championships And Wrestlers