Hey there everyone, Pip from No More Robots here! I’m so thrilled to let you know all about Nowhere Prophet, our dust-punk deckbuilder, which is out today on Xbox One and with Xbox Game Pass!

Nowhere Prophet sees you crossing a post-apocalyptic wasteland on the far-off planet Soma, where bandits and madmen constantly fight for the last few scraps.  At the end of this world lies the mysterious Crypt, which promises safety and prosperity for you and your band of followers – each of which is a companion you carry with you as a card, able to be wounded or killed along the way. Can you keep your followers safe along this treacherous trail?

Nowhere Prophet is a single-player, deckbuilding card game with procedurally generated maps, a high difficulty curve and permadeath. Only the best can survive each test, and very few make it all the way to the crypt. Each member of your deck that you collect, buy or trade is either a human being, a loyal beast or a machine built to aid you cross the wasteland, each one carrying their own name and affiliations. Be careful getting attached though, if these suffer two consecutive wounds they’ll die, and be removed from your convoy forever.

Throughout the game you’ll notice a strong Indian flavour – Inspired by his heritage and frustrated at how few games shone a light on Indian culture, Creative Director Martin Nerurkar has filled Nowhere Prophet with rich and meaningful themes and symbols, from the colour-schemes and patterns that fill the world to the wonderful soundtrack that combines traditional instruments with the grit of post-apocalyptica!

Although Nowhere Prophet is a tough experience, it’s also a game about hope. Sharing luxuries with your people and showing kindness along the road will be tough, and you’ll face some difficult decisions along the way, but ultimately it’ll generate a power that will allow you to reach your goals. While being cruel might be an easier option, your convoy will struggle to keep on the fight without a glimmer of hope. There are also ways to interact with the world’s hidden knowledge, religion and even the others along the same road that will shape how the rest of Soma’s inhabitants see you – what kind of leader will you be?

During travel you navigate across a procedurally generated map, making each trip across the wastes special in its own way. You’ll need to keep an eye on your resources as you pick your route – some roads are definitely more dangerous than others but are also better rewarded. Your choices as you move will be vital, make sure you’re prepared! As you travel on, you’ll encounter a myriad of strange places and even stranger people, each with something different to offer. Each event will be influenced by who you have with you and their faction affiliation and you will be thrust into situations that puts the fate of your followers in your hands.

If you’re lucky enough to gain some rewards, maybe for helping someone, making a milestone or robbing someone along the way, then you can invest those to improve your decks. This could be picking up more followers for your cause, grabbing some luxuries to keep your convoy’s hope alive or a new piece of armour/weaponry to make your prophet stronger. You’ll also be able to study under teachers to give your people the best chance in reaching your goal, if you can afford it!

You will have to overcome enemies to keep your convoy and resources together and looking to pick fights and right wrongs is always a good time, even if it’s just to pick up some new loot! Combat turns the game into a turn-based strategy card game that you must win to survive. Play convoy cards to put your followers onto the field and overcome your enemy, or use skills to change up the battlefield, but be careful: If you’re wounded you will have to find a safe place to heal, and if one of your followers takes too many wounds, they are lost forever.

We’re so excited to get everyone playing, as so much love and care has been put into Nowhere Prophet since 2014! You can blast off to Soma on Xbox One and with Xbox Game Pass today, so we’ll meet you at the Crypt! 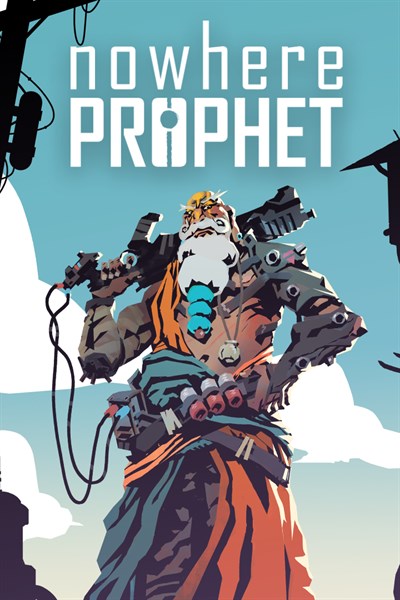 Build a loyal band of followers and survive the journey across a broken world. Barely.

Take on the role of a powerful leader and mystic. Empowered with the gifts of technopathy, the ability to sense and affect electrical currents.

You are the last hope to a band of outcastes and refugees. Lead them across the randomly generated wastelands. Pick fights with greedy slavers and crazy machines using the turn-based card combat. Can you survive long enough to reach the mysterious Crypt?

Nowhere Prophet is a single player card game with procedurally generated maps, a high difficulty and permadeath. At it’s heart are two distinct parts of gameplay: Travel and combat.

During travel you navigate across a procedurally generated map. Make sure your convoy has enough resources to travel as you pick your route. On your journey you will encounter strange places and even stranger people. You will be thrust into situations that put the fate of your followers in your hands.

If you’re lucky enough to gain some rewards, maybe for helping someone – or robbing them, then you can invest those to improve your decks. Recruit more followers to have more and different units to put into battle. Equip your prophet or level up and learn new skills to have access to stronger action cards in combat.

You will have to overcome some enemies to keep your convoy and resources together. And sometimes you may even want to pick a fight for righteousness or just for loot. Once in battle the game changes to the turn-based card game mode.

Play convoy cards to put your followers onto the field and position them so you can overcome your enemy. Or play action cards to dramatically change the battlefield. But be careful: If you’re wounded you will have to find a safe place to heal. And if one of your followers takes too many wounds, they are lost forever.


Nowhere Prophet is set on a far off planet called Soma. Your story begins many years after the Crash, a complete technological collapse. Civilization has broken down and the lack of resources made everyone turn either bandit or madman.

In this world inspired by Indian culture you lead a convoy of outcastes. These desperate men and woman following your vision of a better future. Under your guidance they travel with you through the wastelands. Your goal is the Crypt, a mystical place that promises untainted technology and safety.

If you can survive long enough to find it.

My Rapid Review of Carrion [Xbox] Thoughts on this “semi-love letter”? Not too sure what guys think of love letters, so hope this was sincere and lighthearted enough