A familiar trio tops the leaderboard in week two of the Ninja Battles tournament series.

Ninja Battles is back after a week hiatus in support of the move toward racial equality across the world. Season X Champions TSM ZexRow, TSM MackWood and yung calculator won the first week of Ninja Battles, picking up where they left off two seasons ago. This trio, however, will not have a chance to repeat their performance after tournament host and Mixer superstar Tyler “Ninja” Blevins banned ZexRow for his post-tournament comments after their victory. Clix was also absent in week two after leaving the tournament early back in week one.

The landscape was much different this time around. With the Arena Trios available in Fortnite, the tournament can now host custom lobbies. What does this mean exactly? It means that all the norms of competitive Fortnite are in play. Storm Surge, health siphon, moving zones, 1,500 maximum materials and significantly fewer heal off scenarios, to name a few of the critical differences. As a result, the Ninja Battles tournament was much more competitive in week two.

Bizzle, Commandment and Emad On Top 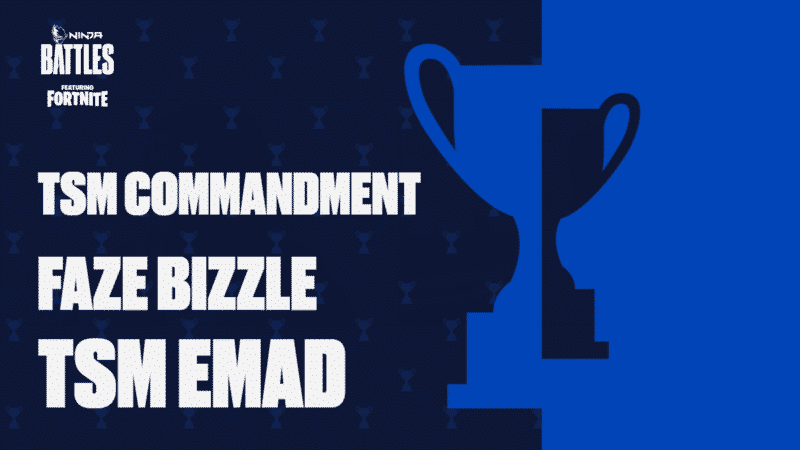 Despite not winning a game during the five-game stretch, FaZe Bizzle, TSM Commandment and TSM Emad took first place convincingly. This dominant trio achieved 57 points with a consistent balance of placement points and eliminations. After dominating the last several weeks of scrims, Bizzle and Commandment swapped out Clix with Emad in their winning effort. The three won $25K USD and are the week two champions for Ninja Battles.

Also, with 50 points was the trio of Chap, NRG Edgey and Av took, who took fourth place. Reverse2k, E11 Grazca and SUMMR placed fifth after winning the first game of the tournament. The complete top 10 trios are listed below: 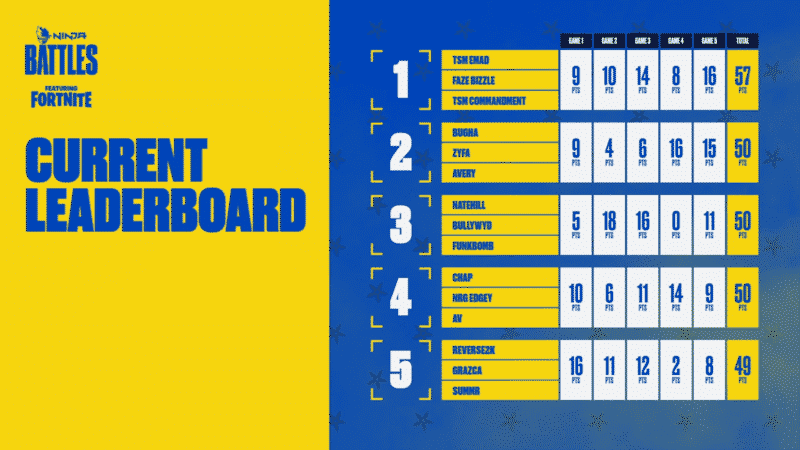 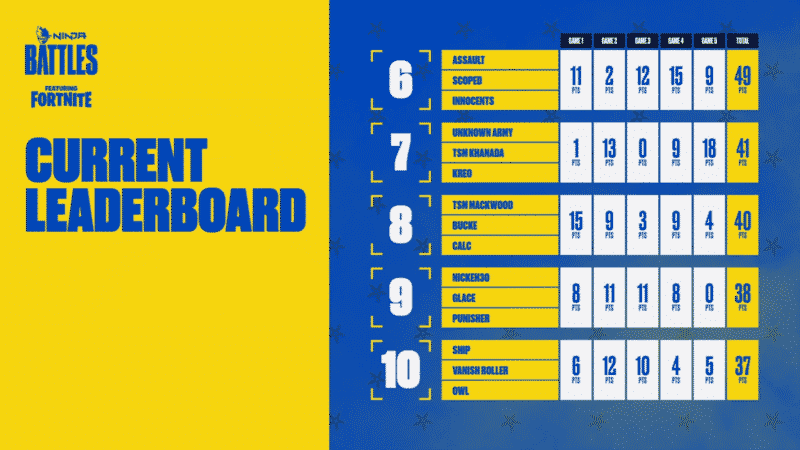 Piece of advice for gamers in this video! And what to expect next week! pic.twitter.com/GFJ6D19FSG

Bizzle, Commandment and Clix have been arguably the best NA East trio since scrims began a few weeks ago. Clix could not participate due to his actions in week one. It only made sense that two of these three mixed with Twitch personality Emad would find their way to the top. With competitive settings now in play, we can expect to see the best trios from week to week find success in the Ninja Battles tournament series.

Overall, the tournament went much smoother in week two. The first week provided a fun throwback to the old days of competitive Fortnite. But it was much more intriguing to see a spread of talent, both pro players and personalities competing in the weekly series. It is unknown at this point whether the format and scoring system will change for the remaining weeks. Regardless, the Ninja Battles series fills the gap between Chapter 2 Season 2 and Season 3 as we await the next official competitive announcement.