At the heart of any racing game is, well, the racing. And here, NASCAR Heat 5 does a solid job. The cars handle well, and the controls are fluid and responsive. Different makes and models of cars behave distinctly enough that it becomes possible to pick a favorite type of car to race in, which is impressive. Weather and terrain effects are similarly well modeled. Racing in the dirt feels different from the mud, which feels different from asphalt.

The simulation is subtle; the game doesn’t beat you over the head with it’s difficulty, and there are ample options to modify the extent of the realism to suit your skill and playing style. If you want, it’s possible to turn NASCAR Heat 5 into a fun, almost arcade-style racing game. But it’s also possible to crank it up to a highly realistic simulation. That ability to tweak the level of difficulty in a meaningful way is much appreciated, as it allows you to ease yourself into the mechanics of the game if you need to, and to slowly take the training wheels off as you get better.

The game doesn’t offer a ton of content on the surface, but what is here is enjoyable. The crux of the game is its career mode, where you create a custom driver and guide them through their NASCAR career. You can start at any of three different levels in the career; you can choose to begin in the small stages, to start in the middle, or even to begin already in the big leagues. This makes the career mode a little less daunting of a proposition. It’s possible to invest days into a single playthrough, or to start later for a smaller-scale experience.

“The career mode doesn’t go as far into depth as some other games, but it’s still an enjoyable experience.”

Interestingly, the lowest level in the career mode, the offroad circuit, is actually the most difficult, at least in my experience. The cars handle completely differently in dirt and mud, which is what all of these tracks consist of. You have to be a lot more precise in your speed and turning than you would on the asphalt tracks. This isn’t a knock against the game, mind you. In fact, it’s a sign of realistic simulation. But it is worth noting that if you’re brand new to the game, it may be easier to start the career mode in one of the higher circuits.

The career mode doesn’t go as far into depth as some other games, but it’s still an enjoyable experience. As you run through each of the races in a season, you’ll get offered contracts to sign with different teams, based on your standings in the season. These contracts come with additional challenges that can be completed to earn extra money. These usually require to finish a certain amount of races in a certain position before the end of the season. Of course, if you’re ambitious, you can also start your own team. This means taking on all of the responsibilities of managing it, and I’d only recommend doing this after you’ve already played through the career mode a couple of times.

Another fun feature is the ability to interact with other drivers. Your behavior on the racetrack can actually affect your reputation within the circuit. Drive aggressively, and you’ll gain a reputation as an aggressive racer. Other drivers can comment on your behavior after races in a sort of fake social media event that occurs after most races. Here, a couple of the drivers will send you messages, and you can choose to respond positively or negatively, and affect your reputation accordingly. It’s not deep, by any means. You basically just choose if you want to be a jerk or not. But still, it’s a fun little aspect of the career mode, and it helps add a small amount of role-play investment in the career mode. 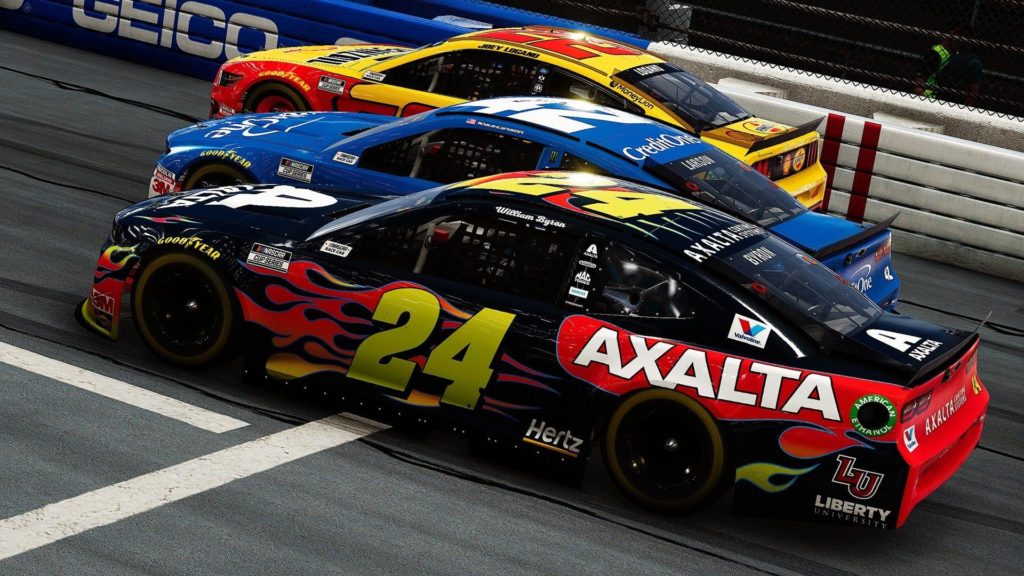 “The audio department isn’t quite as great. The cars sound decent enough, but some audio clipping did pop up from time to time, and the few voice lines that are played get repetitive quickly.”

Aside from that, there’s also a quick race option that allows you to pick up a game and race, and a circuit mode where you complete a series of races within a specific tournament. These are fun options for when you don’t want to get into the full experience of the career mode but for the most part they’re pretty barebones. Multiplayer is similar; it’s fun, but it’s nothing particularly special. The game does offer same-screen multiplayer, however, which is rare these days and always appreciated.

The game holds up decently production-wise. The visuals, and the cars in particular, look really good. The models are crisp and the different vehicles are instantly recognizable. In the rest of the graphics, the developers have opted for an exaggerated, almost cartoonish style. Bright, vibrant colors pop out at you, and character models have large, distinct features. It’s a stark contrast to the realistic mechanics, but it kind of works here. The bright colors help the game stay visually appealing, which is important in a game where you spend most of your time driving the same circle over and over. The character models aren’t anything to write home about, but you don’t see them too often, and they get the job done.

The audio department isn’t quite as great. The cars sound decent enough, but some audio clipping did pop up from time to time, and the few voice lines that are played get repetitive quickly. The licensed music tracks do as well. The game has a handful of licensed songs, most of them indie-rock music, that play over the menus. They’re charming at first, but they quickly grow repetitive. Thankfully, you can control every facet of the audio from the options menu. “If you’re looking for a good, solid racing experience, with the option for a deeper simulation, you could do a lot worse than NASCAR Heat 5.“

NASCAR Heat 5 plays it pretty safe overall. There’s nothing here that’s particularly new or innovative, and if you’re looking for something that will blow you away, this is not the game. It doesn’t change the racing genre, and it doesn’t really do much to change up the NASCAR series formula, either. But this doesn’t make it a bad game. It knows what it sets out to do, and it does it well. The racing is fun, fast, and fluid. The career mode is engaging and replayable without becoming overly complicated, and the multiplayer offers a fun experience, especially with a friend sharing the couch with you. If you’re looking for a good, solid racing experience, with the option for a deeper simulation, you could do a lot worse than NASCAR Heat 5.

This game was reviewed on the Xbox One.

Solid driving mechanics are easy to pick up and fun to play; bright visuals keep the game interesting; local multiplayer is always welcome.

NASCAR Heat 5 doesn’t offer up anything new, but what it does offer is a solid, enjoyable racing experience, and it does that very well.

15 Video Game Sequels That Were Worse Than Their Predecessors

Skill Based Slots: Gaming or Gambling

Skill Based Slots: Gaming or Gambling