Assassin’s Creed Valhalla mixes up its RPG elements a bit in how it plays with the concept of a skill tree. Rather than give up the goods from the start, you reveal chunks of it from the fog as you go. I guess it technically adds a bit of mystery to character progression, until you realize you can just poke around online and see maps of the whole darned thing. Still, even if you have the whole tree laid out in front of you, it might be tricky to figure out what to prioritize. I’ll make it easier: get the Missile Reversal skill as soon as you possibly can. That single ability has transformed the way I play the game – in a good way.

I’ve always enjoyed parrying and countering attacks as long as that’s been part of the Assassin’s Creed series. There’s something I find satisfying about waiting for an enemy to attack, only for your character to knock it aside and punish that enemy for having the nerve to take a swing. Once you get the timing down, it’s the best. And it’s the same in Valhalla. Still, I was getting annoyed during some of the larger raid-type missions, in how archers and other ranged attackers would (wisely) hang back and take pot shots at me while I was busy killing their friends. The nerve! Sure, I could block those incoming projectiles, but it kind of broke my combat flow. The cure for that problem? Why, it’s Missile Reversal, of course.

It’s a pretty easy skill to find, even if you’re still mostly fogged up. Head straight down from the starting node, sticking to the yellow path. After a few clusters, you’re set. Once you unlock it, the real fun begins.

Now, when those ranged goofballs do their thing, you can tap the bumper button and hurl whatever they sent your way back to ‘em. Rocks? Arrows? Little explosive pots? Yep, yep, and yep. The timing is super easy to master, since ranged guys will telegraph their attacks with a visual indicator that fills up right before they fire away. 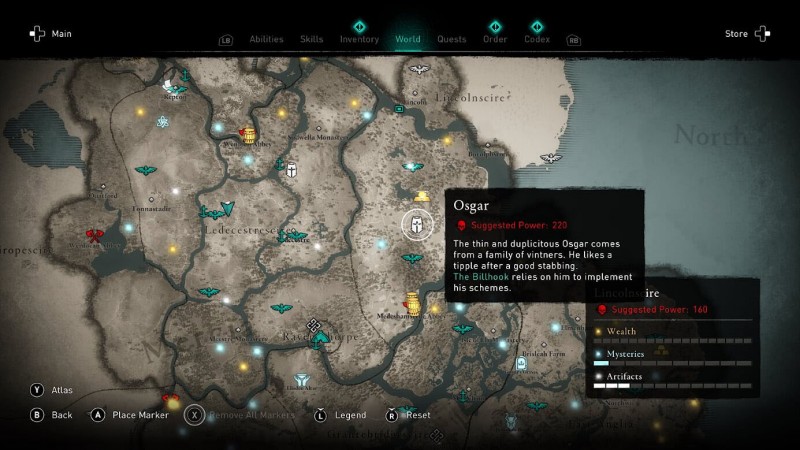 That’s great, but it’s not the best part. You know the Order of the Ancients Zealots patrolling the map? They’re pretty tough, especially in the early game. I kept running into them and thinking, “Maybe this time will be different!” And it never was! Sure, I was woefully under-leveled for these encounters, but I couldn’t resist attacking them whenever I saw them smugly riding their horses. Going toe-to-toe with them may not work well, but you know what does? Missile Reversal! Thanks for asking!

If you can keep them at medium long range, you’re golden. Most will pull out spears or other long-range weapons and try to make up the distance. When they do, you can fling their stuff right back at them. Do that about 10 or so times, and they’ll be ready to give you a nice little speech that they’ve prepared just for you. I was able to do this for guys several dozen power rankings above me with very little difficulty. If nothing else, it’s a great start for your ultimate goal of dismantling their entire filthy operation.

So yeah. Missile Reversal. Unlock it as soon as you can. It’s great!