MediEvil Review – He Is Risen

When remaking or remastering a video game, developers have to walk a fine line: be true to the original, but make it just modern enough that people will want to play it. It’s why, when remastering Halo: Combat Evolved and Halo 2, 343 Industries and Saber Interactive made sure they kept the original gameplay intact. It’s why Bluepoint Games’ remake of Shadow of the Colossus hews incredibly close to the original, making only minor updates like changing controls and tweaking the camera, and why, when announcing StarCraft: Remastered, the first thing that Blizzard Entertainment did was reassure fans that they weren’t making major changes to the game that launched esports. There are remakes that do make significant changes to the source material (see: Metal Gear Solid: The Twin Snakes), but for the most part, developers have found a tried a true formula: the same as it was, but prettier and with a better camera.

That’s what Other Ocean has done in their remake of MediEvil, a cult favorite that released more than 20 years ago on the PlayStation. The story follows Sir Daniel Fortesque, a legendary knight who is credited with leading the armies of Gallowmere against the evil Zarok the Sorcerer and his undead horde hundreds of years ago. Though mortally wounded in the battle, Fortuesque was able to defeat Zarok and drive back his army. Afterwards, the people of Gallowmere revered him as a legend. It’s a good story. 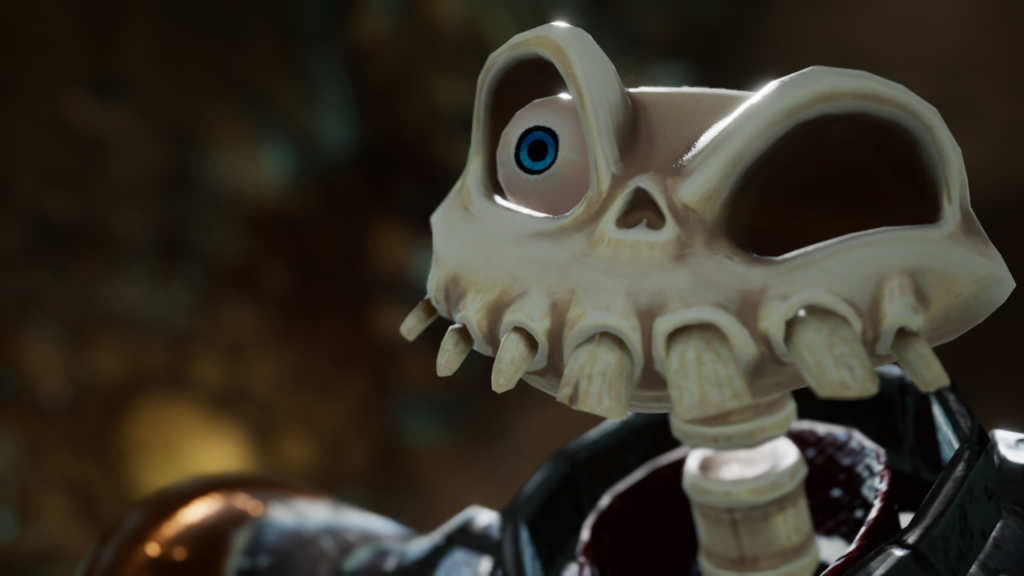 “A lot of work has gone into making MediEvil look and sound modern, and Other Ocean has done an exceptional job of updating the game’s presentation.”

It’s also all a lie. It’s true that Daniel did lead the army that attacked Zarok’s undead horde, but he was the very first to die in that battle, taking an arrow through the eye before the fighting even started. Naturally, this embarrassed him quite a bit. It also embarrassed the King of Gallowmere, who decided to cover it up and proclaim Fortesque a hero. Now, Zarok is back, using his magic to resurrect his army once more. Unknown to Zarok, however, his magic also resurrected Sir Daniel, who finally has the opportunity to become the hero the legends say he is, and earn his place alongside the champions of legend enshrined in the Hall of Heroes, who view him as a fraud.

A lot of work has gone into making MediEvil look and sound modern, and Other Ocean has done an exceptional job of updating the game’s presentation. The character models and environments have been completely redone, the controls have been updated, and even the camera, the true enemy of most older games, has also seen a reworking (though it’s still occasional frustrating, especially when the game forces you into a fixed camera angle). In addition, the game’s soundtrack and a few of its voices (most notably Sir Dan’s and the narrator’s) have been completely re-recorded. The narrator has seen by far the most love, with an expanded script that only improves the game’s irreverent sense of humor. Even the voices that haven’t been re-recorded have been enhanced. The result is that MediEvil looks and sounds like a modern game, and the wonderful art design, hilarious script and voice acting, silly story, and memorable levels make for a game that is still very much worth playing today.

The same cannot be said, unfortunately, about the title’s gameplay, which hasn’t been upgraded at all. While it’s admirable that Other Ocean has strived to retain the original game’s level design and mechanics and done an exceptional job of doing so – Other Ocean proudly notes that their recreation is so accurate that players could use guides and walkthroughs written for the original game in 1998 – it comes at a cost. Much of what MediEvil offers on a gameplay level, while not bad, could certainly be improved, and it’s a shame that Other Ocean has slaved themselves to systems that at more than twenty years old, and not used this as an opportunity to make MediEvil a better game, preserving the parts that work and throwing out the ones that don’t. 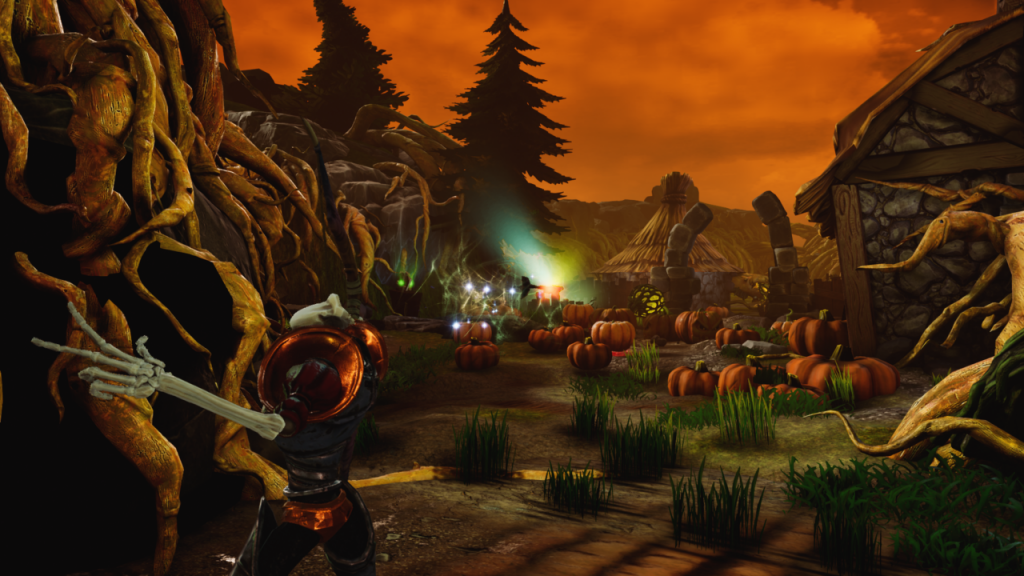 “You’ll approach many encounters one of two ways: stay back and shoot at enemies from range or switch your weapons rapidly in order to kill the charging enemies before they kill you. They’ll do that quickly, as even basic enemies deal tremendous amounts of damage if they land a blow.”

The combat is the obvious culprit here. Combat often devolves into mashing a single button, trying to kill groups of enemies before they kill you. The game tries to alleviate this by giving each weapon access to both light and heavy attacks, the latter of which can be charged, and by providing you with lots of weapons, but it really doesn’t work out. There’s simply little depth to mine here, and despite the enemy variety, you’ll approach many encounters one of two ways: stay back and shoot at enemies from range or switch your weapons rapidly in order to kill the charging enemies before they kill you. They’ll do that quickly, as even basic enemies deal tremendous amounts of damage if they land a blow.

Daniel can ward off blows with his shield, but that shield has durability. High damage moves chew through even the best shields, so blocking isn’t an answer long term. Sir Dan also has life vials, which will bring him back from the dead should he fall, but when a few good hits will truck his meager health bar, that isn’t a big help. You can partially solve this problem by engaging enemies at range, but ammo is limited, and you’ll eventually have to jump into the fray. Boss fights are equally hit and miss, alternating between brilliant and mind-numbingly dull. The best challenge you, but the worst are just repeating the same motion over and over. A particularly egregious example comes early in the game as Sir Dan fights two wolves who continuously circle him and then charge. You avoid their attacks, and then fill them with crossbow bolts and throwing knives. Rinse and repeat. Yawn. But even boring boss fights carry a risk of imminent death because of Dan’s meager health bar.

Which brings me to MediEvil’s biggest problem: a complete lack of checkpoints. It’s commendable that Other Ocean wants to maintain MediEvil’s original design, but restarting a level every time you die isn’t fun, especially when the game’s combat isn’t very good, and a single mistake can cost you your life. This may sound like an odd complaint post-Souls games, but there’s a distinction between a game that’s designed to be replayed ad-infinitum and one that isn’t. MediEvil’s levels are good, and they’re fun the first, second, and even third time. But after that, it just gets irritating, especially since many of the levels just involve fighting, simple puzzle solving, and collecting keys to unlock the next area, and all the visual and enemy variety in the world can’t change the fact that you’re doing the same thing, just in different spaces. The good news is that many of the levels are short, so even if you die, you’re not losing a ton of time. 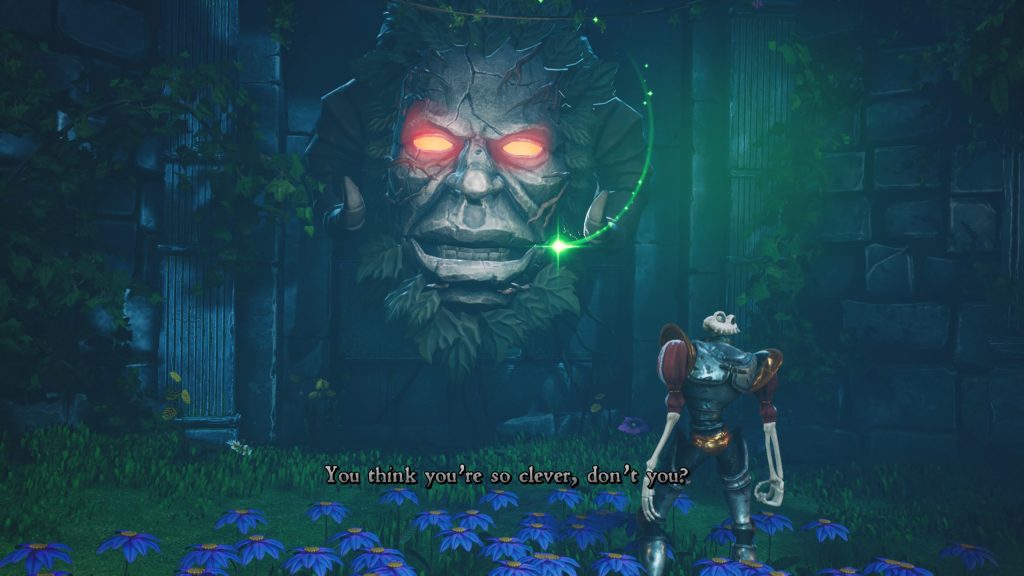 “MediEvil’s biggest problem is that it doesn’t take advantage of the fact that it’s a remake. Other Ocean has done an admirable job of updating the game’s sound design, script, visuals, controls and camera, but it ignored the biggest opportunity: fixing the flaws in the gameplay. “

The levels have chalices, which spice things up a bit, requiring you to fill them by killing all (or most) of the level’s enemies before they can be claimed. Claiming them allows access to rewards from the Hall of Heroes, where the legends of the past offer Dan new weapons and other boons. It adds a level of risk and reward to each level, and acquiring all of them grants access to the game’s best ending. But this isn’t enough to dull the pain of repeating the same level over and over again. If the combat were good, or the game less harsh, the lack of checkpoints wouldn’t be an issue. Unfortunately, that’s not the case.

MediEvil’s biggest problem is that it doesn’t take advantage of the fact that it’s a remake. Other Ocean has done an admirable job of updating the game’s sound design, script, visuals, controls and camera, but it ignored the biggest opportunity: fixing the flaws in the gameplay. MediEvil’s story, characters, and environments are still a lot of fun, but the gameplay feels like a relic of another age, and not in a good way. StarCraft, Halo, and Shadow of the Colossus didn’t need to be reworked because their design stands the test of time. They’re games that exemplify the peak of what’s possible in their genres and trying to change them probably would have made them worse.

MediEvil simply isn’t that good. I don’t blame Other Ocean for staying true to a game they clearly love, but MediEvil’s gameplay simply doesn’t hold up. It’s not a bad game, even today, but it isn’t a good one, either. I hope that someone takes a crack at remaking or remastering MediEvil 2 because this is a charming series that, like Sir Dan himself, deserves a second chance. But if they’re only going to resurrect this franchise to slap a new coat of paint on it, Sir Dan was probably better off dead.

This game was reviewed on the PS4.

The combat feels mashy and imprecise. Dying makes you restart the level you’re playing. Some bosses are really boring.

MediEvil ‘s story, visual design, humor, and charm stand the test of time, but Other Ocean’s refusal to upgrade the gameplay and include checkpoints makes it a game that is stuck in the past.