I like knowing what I’m going to get with a game, and that means that Fantasy Flight’s living card game formula is very appealing. Unlike traditional collectible card games, the core sets and expansions for a living card game have a fixed distribution model; put simply, everyone who purchases a given set gets exactly the same content, cards, and components. Over time, it’s easy to stick with the basics or expand your engagement on a month-to-month basis, catering your purchases to your level of engagement.

Marvel Champions is the latest game to explore this model, and the initial core set is especially impressive. This single release includes all the cards you need to play the game solo or with up to four players total, without any additional purchases. The included rules books are articulate and welcoming, providing preset starter decks for your first few games to help get players up to speed, but a bevy of additional cards that allow you to begin experimenting with deck customization. The included cards are bright, the art generous and evocative of the original comic characters, and the related tokens and other components are solid and well produced. This is a robust game packed into a single box, and one that you can get to playing much faster than many comparable strategic card games.

All that risks burying the lead; Marvel Champions is a ton of fun, especially if you are a fan of the Marvel universe. And, let’s be frank here; doesn’t just about everybody have at least a passing familiarity and enthusiasm for characters like Iron Man and Black Panther at this point? Marvel Champions is a wholly cooperative game in which each character controls one of the iconic heroes, including in this initial set Black Panther, Captain Marvel, Iron Man, She-Hulk, and Spider-Man. Working together, you confront one of several villains (Ultron, Rhino, and Klaw are included here) and their scheming plans, even while juggling the competing needs of both your hero and alter ego identities.

The general flow of play encourages players to balance a number of competing interests. Without a doubt, you must smash the opposing villain into submission with regular and concerted attacks. Simultaneously, you must counteract and thwart the villain’s blossoming scheme before it comes to fruition. Along the way, you’ve got to steadily improve and upgrade by attaching upgrades to your hero. And, from time to time, make sure that you recover from your battles as your alter ego, resting up and sometimes tending to your life outside of the suit. 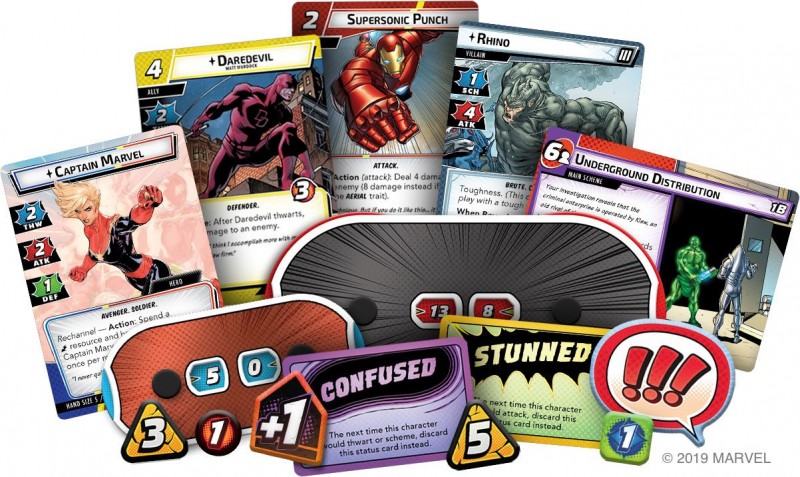 That all plays out through a straightforward flow of turns. Each player enacts as many plans and attacks as they can with their current hand of cards, expending resources to perform actions and getting more beneficial cards onto the table. Villains then trigger, attacking each hero in turn, or advancing their schemes if the hero isn’t there to fight (because they are recovering as their alter ego). Then every player resolves an encounter, which might for example be a side scheme enacted by Rhino to steal stuff across town, or the arrival of Sandman into the fight to further cause trouble. Players pursue that structure of play until the villain has either been beaten to reach victory, or until the villain has either defeated all the heroes or completed them scheme, leading to a loss.

Even in my first game, I was impressed by the ease of play. Part of that is the included starter decks, which do a stellar job of onboarding new players through a structured first game that is characterized by the most straightforward cards and actions available in the box. But even beyond that initial game, Marvel Champions is one of those card games that just clicks very quickly. Heroes act first, villains respond; the natural flow of play is logical. Villainous minions trigger against the character who drew them, but not the other heroes. Character cards (which flip between their hero and alter ego sides) can only trigger powers that match the side of the card currently facing up. Through these, and dozens of other intuitive ideas, Marvel Champions is easy to learn and teach.

Simultaneously, it will only take you minutes to recognize the many ways that the designers have maintained strategic depth and engagement. Cards combo in exciting ways, like when Black Panther flings out “Wakanda Forever!” to trigger all his available upgrades, with damage bonuses if he manages to save those energy daggers for the last to trigger. Planning ahead pays dividends, like if Spider-Man thinks a big attack is coming, he can web up the bad guy to prevent the assault and stun them instead. Each character plays differently, and it’s fun to learn the playstyle for each, and makes me excited for the promised new heroes that will be introduced to the game over time. And importantly, many abilities are structured to encourage teamwork, like Carol Danvers’ core ability, which lets her choose any player to draw a card, expanding that hero’s options. Actions encourage the players to contrive for victory together, but independent character card decks encourage each player to still engage on their own, helping to avoid the dreaded dilemma of the single over-controlling player that can sometimes bog down a cooperative game night. 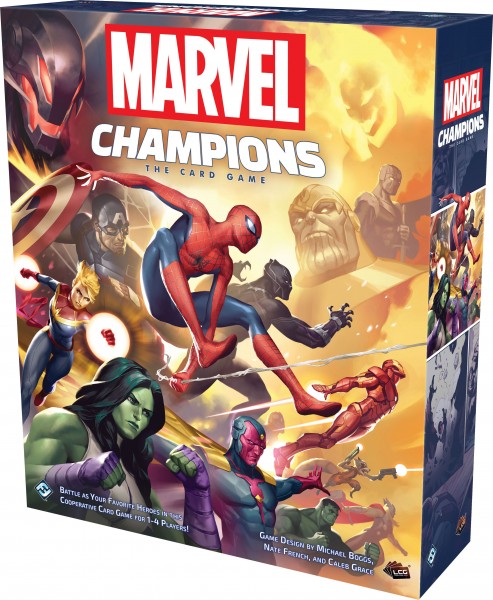 Beyond strategic depth, it’s clear that the makers of the game simply “get” what works about the Marvel heroes and villains, and recognizes ways to help each character feel right. Black Cat joins Spider-Man as an ally, and steals cards to bolster his hand. She-Hulk breaks out a massive gamma slam that deals damage proportional to how much battering she has already taken. Iron Man can head into battle with a carefully curated set of upgrades, but only after taking precious time as Tony Stark to carefully shuffle through those options and to build up his Mark V suit.

That sense of really being enmeshed in your character is aided by a number of other card types, including nemeses and obligations. Captain Marvel may be pulled away from the broader villain scheme being enacted by Ultron to deal with the arrival of Yon-Rogg. Or maybe Peter Parker must take a break from the action to deal with an impending eviction notice for his apartment. I love that give and take between the different aspects of the characters’ lives, and the need to regularly move back and forth between their identities.

One of the biggest triumphs of Marvel Champions is the way that it simultaneously offers a complete experience, but also leaves you hungry to snag those inevitable expansions as they come down the road. I’m already stoked to see what Captain America brings to the table in his announced hero pack, or how Green Goblin will seek to advance his plot in his impending scenario pack. And while the included and recommended starter decks offer a lot to play around with, the game also suggests intriguing deck customization options, which virtually beg to be tweaked through the addition of cards. For me, given that I can confidently purchase new expansions and know what I’m getting out of them, I don’t mind the drive to expanding the game, but it might be a turn-off for some players to feel like there’s always more to buy. With that said, this initial set includes almost 350 cards to get you going, and that’s going to add up to many hours of fun, even without any additional investment. 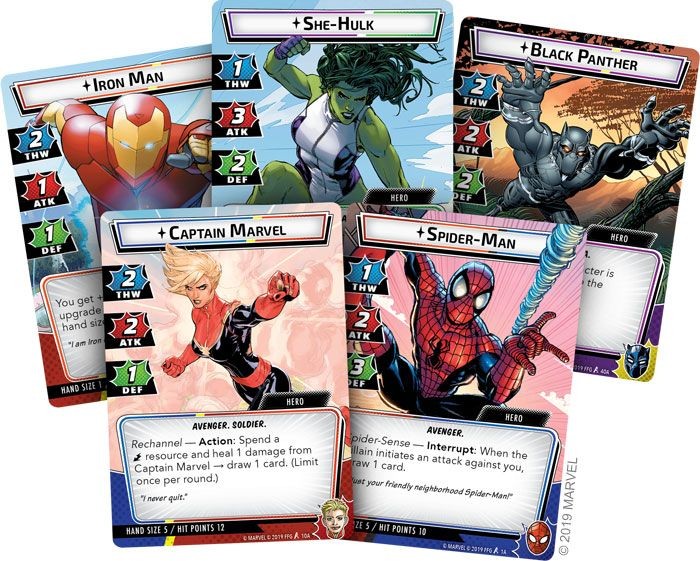 Cooperative games can really succeed or fail on the strength of the engagement they engender with the players at the table. Even the most interesting strategic affairs can fall flat if the core concept doesn’t get the whole group on the same page. It’s here that the Marvel license really pays dividends for Champions; after the last few years, these characters are at the top of their cultural popularity and enthusiasm, and the shared vocabulary of things like “web shooters” and “repulsor blasts” can do a lot to get the table engaged. That’s why I feel so comfortable offering this up as a broad recommendation to virtually any gaming group. My only caveat? The roughly 90-minute playtime, alongside the high dependence on reading and strategy, mean that the recommended age of 14+ is something you should think carefully about before breaking it out at the next family game night. While the colorful artwork is sure to hit a lot of buttons for that 8-year old Spider-Man fan, you need to judge for yourself if they’re ready for the complexities and time investment the game demands.

Whether or not you decide to give Marvel Champions a shot, I’m confident that I’ve got some sort of tabletop game to recommend that’s the right fit for your family and friends. Click into the hub banner below to explore past recommendations from Top of the Table, and drop me a line if you need some personal guidance, whether on whether Marvel Champions is a good fit for your group, or if you’re looking for something else entirely.

Afterparty, The Next Game From The Oxenfree Team, Arrives In October

Afterparty, The Next Game From The Oxenfree Team, Arrives In October