Meet the teams fighting for a spot in the main event through Group B of the Play-Ins.

After a year of intense action, the League of Legends 2020 World Championship is set to begin. Twenty-two teams fought through their regional league and now prepare to fight for international prestige and glory. The lower seeded teams of the major regions along with the best teams of the minor regions first must battle through the Play-In stage though. There are two groups here, each with five teams, and today we’re taking a look at Group B, consisting of LGD Gaming, PSG Talon, V3 Esports, Unicorns of Love and Rainbow 7.

First up in the group is the LPL fourth seed, LGD Gaming. The last time this team saw the Worlds’ stage was in 2015, but they’re finally back to make a statement. Their triumphs over 2018 World Champions Invictus Gaming to secure the final seed is already a statement in itself and there are a lot of eyes on this organization now. This is especially so considering they took not only IG’s potential spot, but also FunPlus Phoenix’s, last year’s World Champion. They were the underdogs but managed to prove they’re worthy of the spot.

The main players to watch on this squad are definitely jungler Han “Peanut” Wang-ho and mid laner Su “xiye” Han-Wei. Many will recognize Peanut from his time on SKT T1, where he made a splash on the international stage as an aggressive jungler with insane carry potential. Don’t worry, he still holds true with that style. His impact in the early game is almost always felt and he knows how to snowball his advantages, especially with the likes of Nidalee and Graves.

On the other hand, Xiye is another incredible player who really shined this year. He has a long career in the LPL and LoL Esports, honing his skills for this very moment in time. This stand out mid laner is proficient at mages and can play any style of them, from assassins to control mages to supportive styles. In addition, his mechanics are top-notch and he made highlight-reel plays throughout the Summer Split.

Like most LPL teams, LGD is about the early aggression. They’re down to fight early and often, and with their duo of Ha “Kramer” Jong-hun and Ling “Mark” Xu stepping up their aggression in the bot lane, they’re a force to be reckoned with in this group. 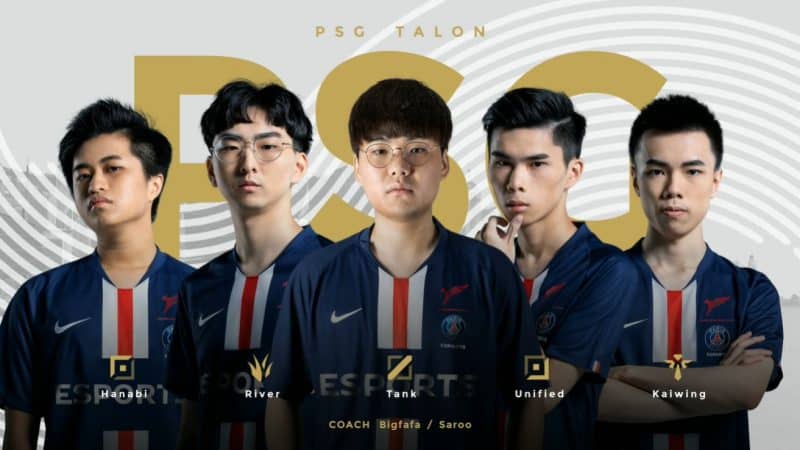 Next up is PSG Talon, coming in from the PCS. They’re the second seed from the region, losing the ticket straight to the main event to Machi Esports. In the regular season, PSG secured third overall but caused a real stir in the playoffs. Here, they beat Nova Esports easily, then had to face ahq eSports Club. To the surprise of many, PSG handily beat them 3-1 then moved on to beat Machi in a very close best of five. Unfortunately, they did end up losing to Machi when they remet in the Finals though. Regardless, PSG proved they’re a serious threat.

Now, PSG will hope to prove that on the international stage. There is a major problem for them though. Two of their players, Kim “River” Dong-woo and Park “Tank” Dan-won won’t be able to attend the Play-In stage. Instead, they’re borrowing Hsiao “Kongyue” Jen-Tso and Chen “Uniboy” Chang-Chu from ahq eSports. Uniboy and Kongyue are experienced players on the Worlds stage, so they’re not a downgrade by any means, but the adjustment will be relatively sudden. It can take weeks or months for teams to truly meld together, so this impromptu squad will have to really step it up.

The teams from this region typically do well in the Play-Ins, so if PSG does manage to make it out, Tank and River will take to the stage again. From there, they’ll have a tough climb ahead of them. However, the mix-matched PSG Talon needs to find some synergy to make it to that point. There are many great teams they have to fight, so it’s not going to be a cakewalk. But who knows, maybe this squad will bring something else to the table and prove to be an even bigger menace than before. 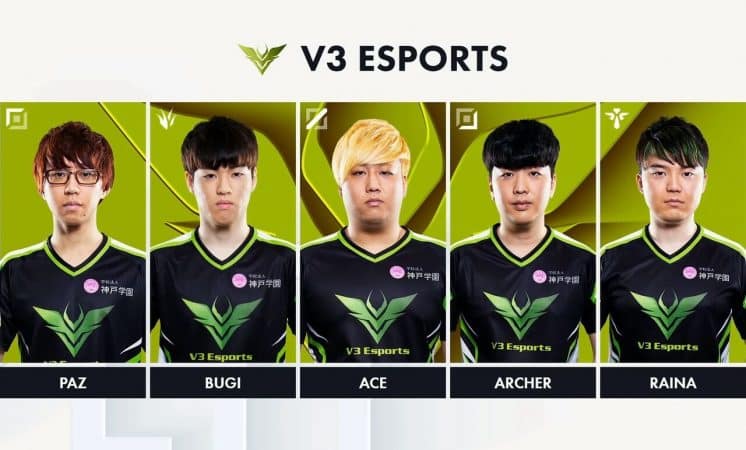 Representing the Japanese LJL is V3 Esports. For the past few years, DetonatioN FocusMe dominated the region and were almost guaranteed the World’s spot. This summer, however, things changed. V3 Esports went on a tear, decimating pretty much every other team and becoming a serious contender. Their best of five versus DFM was an intense one, and in the end, they cemented themselves as the best LoL team in Japan. Many analysts have said that the LJL has been on the come up the last few years, so V3 will want to continue that trend and make their mark.

There are two distinct points of pressure on the team that will give them a shot to do so. The first comes from the jungle. Lee “Bugi” Seong-yeop is the absolute definition of a hard carry style of jungler. He’s not settling for playing boring tanks. No, he’s picking champions like Lee Sin, Lillia and Nidalee every game. He always is pressuring the map and linking up with his support to make plays.

Speaking of the support, Shin “Raina” Okubo is the other main playmaker on V3. Like Bugi, he has a very distinct style, and that’s the engage style. The hook champions are his forte, along with a pretty mean Pantheon. This style allows him to crush his opposing laners alongside his ADC Lee “Archer” Keun-hee, who’s a star in his own right. Archer is a crutch for the team, being a strong point of power in lane and in team fights. In games where he can thrive, he always pops off and his KDAs show that.

Overall, if V3 has their ducks in a row, they have a good shot at making a decent showing. As a rising minor region, it’ll be interesting to see what they deliver. 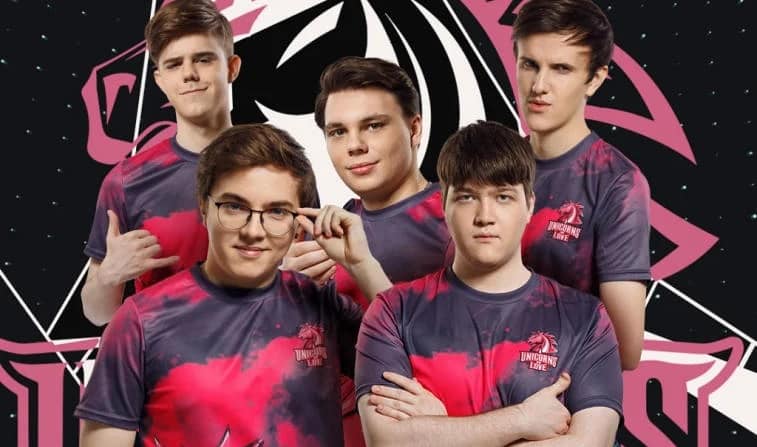 Fourth on the list is a beloved name in the western LoL scene, Unicorns of Love. For those who don’t know, UoL used to play in the EU LCS but moved to the Russian LCL when they rebranded to the LEC and franchised. This year, the organization is fielding the same roster that attended MSi in 2019 and had a great Play-In Group Stage there. UoL beat out Gambit Esports in the Summer Finals to claim the region’s Worlds spot. As a fan-favorite name, they’ll have a lot of people rooting for them.

Like many other Worlds quality teams, the crux of this team lies in the mid-jungle synergy. Kirill “AHaHaCiK” Skvortsov and Lev “Nomanz” Yakshin work together quite well in the early game to make things happen. They’re best buds, roaming around the map when possible to find skirmishes and objective plays. AHaHaCiK excels on junglers that have agency, though does pick things like Trundle and Volibear from time to time. However, Nomanz is a fantastic mage player, great with a host of them, including an especially scary Kassadin pick. Meanwhile, Ilya “Gadget” Makavchuk is a rock for the team in the bot lane, piloting his AD carries with skill in the tense mid to late game team fights.

Seeing as Gadget and Nomanz are proficient on more scaling picks, UoL tends to play more for the late game. Sure, the mid-jungle duo can make plays early, but when UoL is five they’re much more comfortable. Their team fighting is great and will be their edge in the tournament. If they can weather the early game storm of other teams, UoL has the know-how to outplay nearly anyone in the late game. 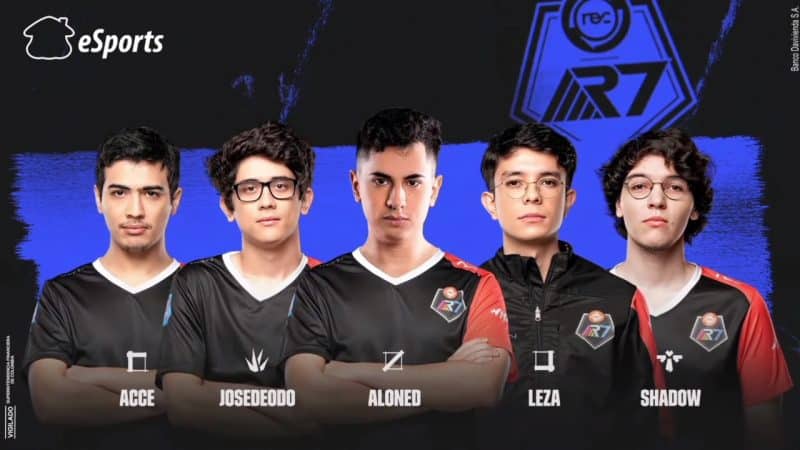 Rainbow7 (formerly Lyon Gaming) is a legendary LoL team in the Latin American scene. They boast ten regional championship titles and three Latin American championships. They had to pull off quite a run to make it here though. In the summer (Closing) season, they tied for second with two other teams, but another team, All Knight, looked a step above the rest. Despite that, R7 showed that they deserve the World’s spot by beating the other second-place teams, then going on to beat the #1 All Knights in a five-game series. Now it’s their time to shine.

This team’s biggest point of strength is their bottom lane. Support player Facundo “Shadow” Cuello and ADC Francisco Rubén “Leza” Jara Barragán are two very solid players. Leza is super consistent, holding his own when he needs to and popping off when his team sets him up. Shadow in particular is great because he’s able to play things like enchanters well, but engage champions even better. Almost always, Shadow is the man going forward to find the key engages and enables his teammates for success.

Actually, the versatility in champions that Shadow shows is something the entire team has. Essentially every position can play the carries or utility/supportive style. For example, top laner Emmanuel “Acce” Juárez and jungler Brandon Joel “Josedeodo” Villegas both consistently hop back and forth between playing carry champions and tanks. The bot lane can step away from typical duos and bust out things like Sona-Lux too.

Finally, there’s one thing that R7 has that you can’t really quantify. Clutch factor. Even if this team is put behind early, they find ways to clutch out fights and win games. They may not always be the cleanest, but can find ways to claw themselves back and cause upsets.