Knockouts are on, with two teams from each group fighting for their World’s hopes.

After four days of intense competition, the 2020 World Championship has moved on to the Play-In Knockout Stage. Here, the remaining Play-Ins teams will take each other on in best-of-five series. Today, LGD Gaming (“LGD”) and Rainbow7 (“R7”) from Group B took to the Rift, with MAD Lions (“MAD”) and Papara SuperMassive (“SUP”) from Group A following after. These series meant so much for these teams, so here’s how the second series went down.

The previous series was quite one-sided, but the first game of this series set the stage for a much closer one. KakAO claimed First Blood at five minutes by ganking bot, killing Kaiser. After that, a few objective trades let both teams gain advantages, but still stay relatively even. However, SUP pulled ahead around the 15-minute mark by picking off Kaiser, Humanoid two separate times and knocking down the first tower.

But all of a sudden MAD threw a sucker punch. At 17 minutes a team fight was engaged in the middle lane, where MAD cut down four SUP champions while losing only one. Then, MAD miraculously stole away an Ocean Dragon to deny Soul point from SUP and win a team fight three-for-zero. But SUP had a beautiful team fight at 23 minutes where they pulled off a wombo combo with Alistar, Galio and Hecarim to kill three-for-one. It looked shaky for a moment but SUP was back in control now.

The game stalled out for a few minutes, until SUP set up in MAD’s jungle. Here, SUP engaged onto MAD and killed two before turning to Baron. They didn’t take the objective though as a team fight that ensued went one-for-one. The straw that broke the camel’s back occurred at 33 minutes when the teams met at Ocean Dragon. MAD tried to burn it down and secure Soul, but KakAO stole it away! Then a team fight broke out where SUP killed four, chased down the last one, then pushed down mid. With no one left to defend, MAD watched SUP take the first Nexus of the series. 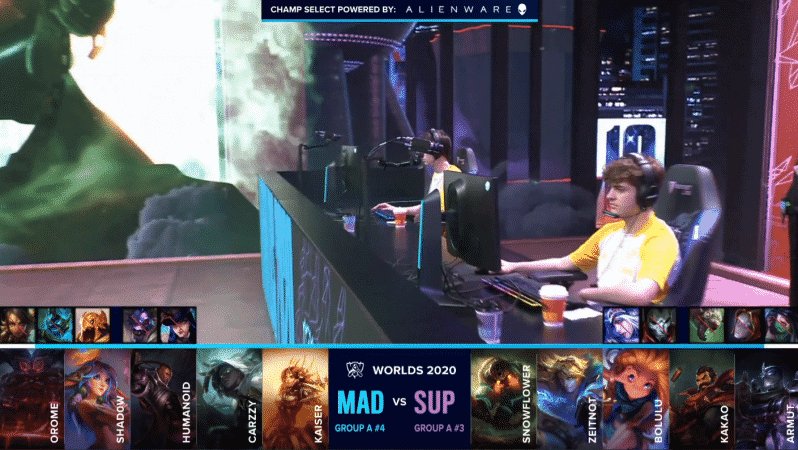 Game Two was another back and forth one with MAD emerging victorious this time. First Blood came out in a skirmish in SUP’s jungle, where the teams traded one-for-one. Next, SUP took an Infernal Dragon while MAD the Rift Herald. But then MAD’s bottom lane made a great play, outplaying SUP when they dove beneath the bot lane towers to get two kills while both surviving. Soon after this happened, MAD solidified a lead by taking the First Tower bonus top.

MAD had a clear lead at this point. This showed even more at 15 minutes when MAD took a second Herald and a two-for-one team fight win. SUP did bite back with a two-for-one team fight top but when MAD won a team fight mid, it still looked bad for SUP. They found a miracle play though. At 23 minutes, they went all the way into MAD’s jungle and found a kill and heavily damaged multiple MAD members. With this timing window, SUP immediately went towards Baron.

SUP nearly had the Baron dead, but all of a sudden, Shad0w was in the pit and stole the Baron away! MAD won the ensuing team fight as well. Equipped with the Baron buff, MAD first went bot to take the Inhibitor, then mid. There was a one-for-one fight at the tail end of the Baron duration but SUP still hung on. That was until 30 minutes, where one last fight happened mid. Even though MAD only got one kill, it was enough for them to barrel down the mid lane, snag two more kills and a Nexus destruction of their own. 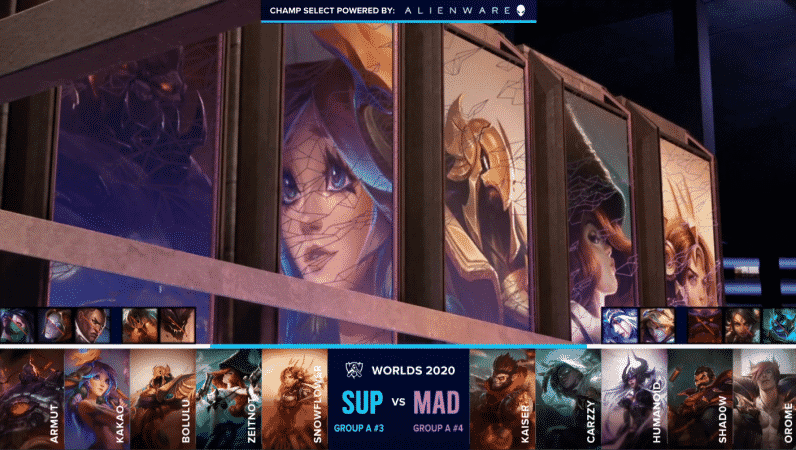 After taking a loss in Game Two, SUP hit back hard with a dominant Game Three victory. Funnily enough, Orome was the one who got First Blood against Armut with a nice solo kill, but traded his life to KakAO for it. The SUP bot lane popped off though as Zeitnot killed Carzzy in the isolated 2v2. An 11-minute skirmish top went SUP’s way two-for-zero in kills before a fateful fight happened. In the bottom lane, a team fight broke out where SUP killed all five MAD champions, carving out a massive lead for themselves.

Things became worse for MAD when SUP took the First Tower bonus top and two mid lane towers with a Rift Herald. At 20 minutes, they kept the ball rolling by picking off Carzzy and taking a third dragon. MAD did manage to pick off Armut but it did very little to change the tide. This showed true at 24 minutes when the teams spontaneously met in the top lane. Here, SUP eliminated all five MAD members and picked themselves up a Baron buff.

It appeared that the game would soon close now that SUP had this buff. But MAD wasn’t going down without a fight. At 26 minutes, they won a team fight three-for-one at took a Mountain Dragon to stop SUP’s Soul. They also picked KakAO off and killed him. Unfortunately for them, none of this was enough, because at 32 minutes SUP found a four-for-zero team fight win in the mid lane and promptly ended the game. 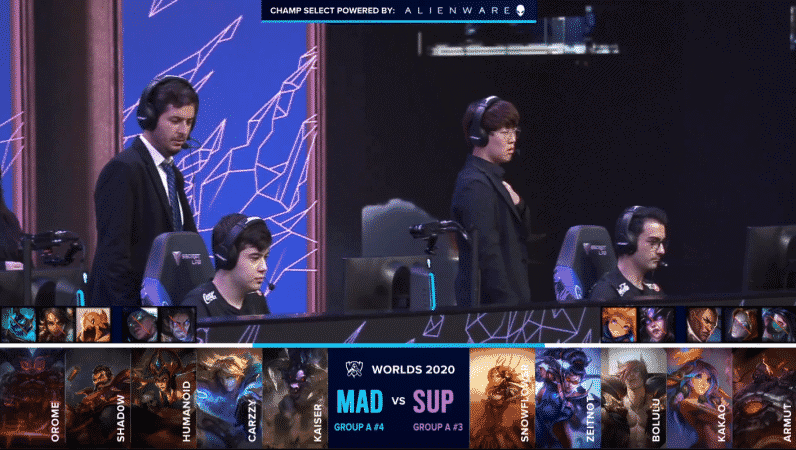 Once more, MAD tied up the series score and brought the game to double match point. This time, the early game was relatively quiet as the team scaled up for bigger engagements. First Blood finally happened at 10 minutes, when KakAO visited the top lane and put down Orome’s Ornn. At the same time, MAD converged on the mid lane to drop Rift Herald, kill Bolulu and take some plates. As such, it was rather even after these plays.

And the next series of plays maintained that status quo. A skirmish in the mid lane went two-for-zero overall for MAD, while one at 15 minutes went two-for-zero for SUP. Shortly after that, SUP claimed the First Tower bonus, but MAD traded a tower top. The deciding point of the game was at 20 minutes then. Here, SUP attempted to engage onto MAD but it backfired horribly. MAD pulled off a great counter-engage to kill four-for-one and take an Infernal to boot.

After this, MAD was looking in a great spot. The game stalled out for a few minutes until the teams decided to meet for a dragon fight at 28 minutes. At this point, MAD executed another fantastic counter-engage to win another fight and kill three from SUP, taking the dragon and even Baron right after. The siege had only just begun when MAD went top and forced a team fight on SUP. They killed all five members of SUP pretty easily and saved themselves the time of sieging. With this opening, MAD wasted no time in destroying SUP’s second Nexus. 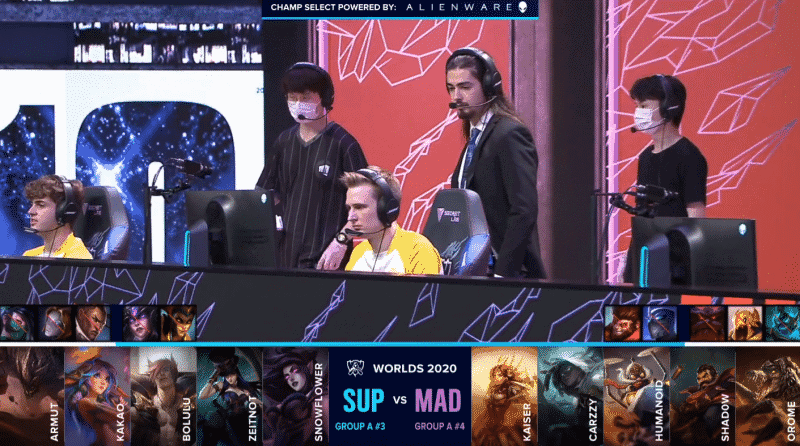 Game Five delivered an incredibly tense match, but in the end, the TCL representatives triumphed over the LEC’s. It all began with a scrappy 2v2 fight in the top lane, where both teams got a kill each. But next, SUP fought a skirmish in the bottom lane where they pulled ahead two-to-one in kills. The pressure kept ramping up as the SUP bot duo killed Kaiser in the isolated 2v2 and Armut Teleported mid lane to kill Humanoid.

Because of all this, MAD was far behind. And they only continued to fall further behind. At 14 minutes, SUP emerged victorious in another team fight, this time picking up four kills, the First Tower bonus and a Mountain Dragon too. MAD was drowning now. SUP dove the top lane tower to kill Orome at 17 minutes, then picked off Kaiser at 18. Things kept getting worse and worse for MAD, until a brief ray of hope shone through.

At 25 minutes, a fateful team fight broke out in the mid lane. Here, Humanoid was massive and carried his team to a two-for-zero team fight win. But SUP wasn’t having any of it. As soon as MAD went to dragon, they showed up to fight. MAD crumbled at this pivotal moment, giving over four kills to SUP. As a result, SUP secured the Baron and began to siege MAD’s base. There was little they could do against SUP’s composition and were steamrolled when they attempted their defense. After cutting down multiple MAD members, SUP pushed on, destroyed the Nexus and set themselves up at one more series away from the main event group stage.