Knockouts are on, with two teams from each group fighting for their World’s hopes.

After four days of intense competition, the 2020 World Championship has moved on to the Play-In Knockout Stage. Here, the remaining Play-Ins teams will take each other on in best-of-five series. Today, LGD Gaming (“LGD”) and Rainbow7 (“R7”) from Group B took to the Rift, with MAD Lions (“MAD”) and Papara SuperMassive (“SUP”) from Group A following after. These series meant so much for these teams, so here’s how it all went down.

The opening game of the day delivered a rather expected result, with LGD coming out to an early series lead. It started off in the bot lane, where Kramer killed Leza with his Hail of Blades Tristana for First Blood. This helped LGD take the first dragon at seven minutes. After this, LGD went to the top side to take Herald. Even though they had their ADC bot lane, R7 tried to contest the Herald take, which only led to them donating over a kill too.

Despite being in a gold deficit now, R7 did make moves to try and come back. They picked off Peanut, who overextended into their jungle first. Next, they made a great snap engage onto LGD to pick up two kills in a team fight. Unfortunately for them, they couldn’t keep pulling these plays off. At 16 minutes, LGD found another great team fight, where they killed four from R7 and took a second Herald.

R7 did try to stay proactive, as they killed Langx in the top lane, but LGD punished them mid by getting a kill and taking two towers. From here, LGD set up in R7’s jungle. This was important because, at 22 minutes, LGD forced a team fight to get three more kills. This allowed them to secure Baron Nashor too. As a result, LGD began their siege, but it was rater slow at first. A few minutes passed, until one final team fight erupted in the R7 jungle. Once again, LGD came out on top and had the momentum needed to sweep into R7’s base and take their Nexus.

Game Two was another pretty clean one for LGD. Peanut was the one to make the first move this time, ganking and killing Aloned for First Blood. Josedeodo did respond by ganking top to help Acce kill Langx though. R7 next claimed the Rift Herald, which they used to knock down some plates. But throughout the early game, LGD was securing dragons and stacking them up for a potential Soul.

At 16 minutes, LGD was already eyeing up their third dragon. Not wanting to let them have it, R7 fought them for it, but it didn’t go well. LGD got two kills before taking the Infernal Dragon. Then, at 23 minutes, LGD pushed R7 out of the river once again and secured the powerful Infernal Soul. Though R7 wasn’t down much gold at this point, the game state definitely favored LGD. As a result, LGD was easily able to rush and secure the Baron.

When LGD began to push, a drawn-out team fight broke out in the middle lane. It looked close at first, but eventually, LGD came out on top three-to-one in kills and began their push down mid. R7 had no chance to defend their base at this point, and as a result, they could only watch as LGD rampaged through their base and took their second Nexus of the series. 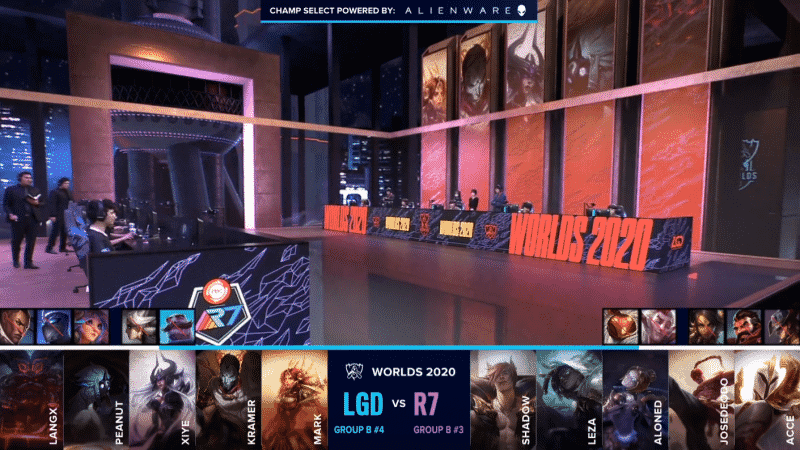 After an underperformance in the Play-In Group Stage, LGD showed what they’re truly capable of by finishing the clean sweep of R7. Peanut, who had tremendous impact throughout the series, continued to have good early game impact by ganking and killing Acce under his tower for First Blood. But R7 wasn’t slacking, they picked a good fight at the dragon pit to get a kill, along with the dragon. Meanwhile, Peanut continued to focus top, killing the Rift Herald and using it to secure the First Tower bonus.

During the mid game, R7 found some picks across the map which led to some objective takes too. It was rather even at the 20-minute mark but it wouldn’t stay that way forever. LGD quickly started ramping up the pace, as they picked off Aloned at 22 minutes, won a team fight two-for-one at 25, then found a pick onto Josedeodo at 27. After this series of plays, LGD clearly had a solid hold on the game.

Because of this, LGD was in a solid position to rush the Baron at 28 minutes. They secured it with no problems, then turned to force a team fight and grab two more kills. Powerless to stop their opponents, R7 had to watch as LGD demolished both their bot and mid Inhibitors. Hoping to make the final blow, LGD then moved top to try and take the last Inhibitor. Inevitably a team fight broke out and LGD absolutely slaughtered R7. They Ace’d the LLA representatives before closing in on their Nexus and finishing off the series 3-0.

Virtus.Pro Is Replaced By Cyber Legacy At ESL One Germany

Virtus.Pro Is Replaced By Cyber Legacy At ESL One Germany