The LoL World Championships are one of the best times of the year for us at ESTNN. So with the annual Pick’ems going live, we thought we’d all throw everything out there and post our own Pick’ems for the world to see! Now, take a scroll through, see who you think is trolling and who’s 200 IQ! And if you want to try your analytical skils (or luck) head over to the LoL Esports site and make your own!

I just can’t get passed the EU v LPL dream. Top Esports will make the Grand Final, I think that’s nailed on. Group D should be a cakewalk for them and I doubt they’ll face too many issues in knockouts, providing they avoid G2 or DAMWON. As for who they’ll meet in the Grand Final, my money is on G2 Esports. EU bias very much not put to one side, G2 shows up when it counts, regardless of form. They have one of the best mid laners in the world in Caps, one of the most consistent top laners in Wunder, and reliable junglers in Jankos. The bot lane gives me some cause for concern. I still don’t know if I trust Perkz in the early game, however, if he can make it mid to late game then it will be fine.

Otherwise, I do think NA will struggle. TSM is in a rough group and FlyQuest has almost no hope of making it out of Group D. Team Liquid might look like a contender after Play-ins, however, the Play-ins hype is probably not justified and Team Liquid will probably crash out. Outside of G2, Europe could also struggle depending on what version of Fnatic decides to show up.

Eastern dominance with some EU flair 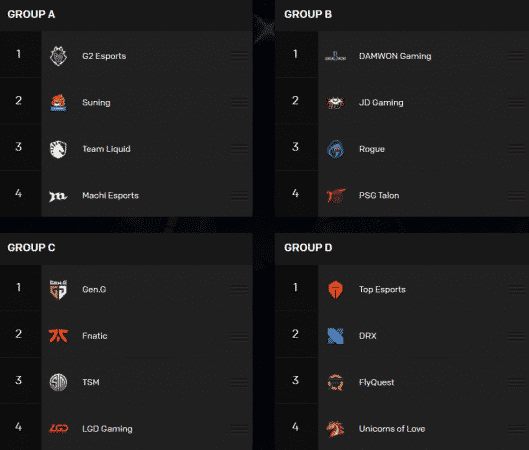 So starting with Group A, last year’s World’s finalists in G2 topping the group is a no brainer. Suning does seem pretty good though. But if we see peak G2 they don’t really have a chance to take the #1 spot away. Below them is TL, since they had a really impressive play-ins, but still have the same, slow, exploitable style. Lastly is Machi, but they’re definitely capable of causing some upsets.

The group of death is pretty much decided for me already for who will make it out, but the order could definitely change. I think Damwon is an awesome team and will probably make it all the way to this year’s finals. JDG is their main competition here, and though formidable, Damwon should be able to take them head-on. Then we come to Rogue and PSG. Sure, both of these teams might have the ability to take a game off DWG or JDG, but it’s not likely. I’ll be praying for their souls.

Group C is the most wide-open one. Gen.G seems like the favorite, and I think that Fnatic’s playoffs performances showed they’re meshing together a lot better than during the Summer Split. However, TSM had an amazing post-season run too, so they certainly have a shot at making it out of groups. LGD might have the potential, but some shaky Play-Ins games leave room for doubt.

Finally is Group D. It’d be a sin not to put Top in first, then I believe that DRX is definitely a cut above FlyQuest and UoL, despite their inconsistencies. FlyQuest has a solid core, so they probably won’t get smashed, but I don’t hold too much hope. Lastly, I loved watching UoL in Play-Ins, but their wacky strategies can only go so far. 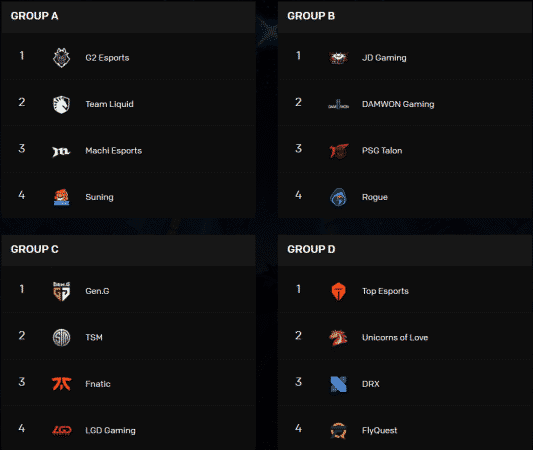 I think Group A will be the closest race and each team has a good chance of at least taking second place. G2 is the favorite and will likely take the top spot if they have retained their summer playoff form. Team Liquid, Machi and Suning will make each match a hard-fought battle, but I see Team Liquid winning a tie-breaker against Machi in the end.

In Group B, it’ll be JDG and DWG taking one game from each other and sweeping the other matches. I look forward to their tie-breaker match to see which one comes out on top. While both are deserving of the number one seed, I think that JDG will be able to win the tie-breaker for the top spot.

Group C will be the tale of the bot-lane, as each team prides itself in that area. Gen.G being arguably the best bot-lane duo in the world has a strong chance of winning this group. LGD has turned a corner, but the inconsistency of their play makes them seem unlikely to get out. TSM and Fnatic will battle it out for the number two spot with TSM winning the tie-breaker.

Group D is the Top Esports show. I am pretty confident they will sweep this group, but it is possible that DRX or UoL can sneak a game away. UoL and DRX will battle for second place leaving FQ out of the running. UoL pull off the upset and take out DRX in a tie-breaker. 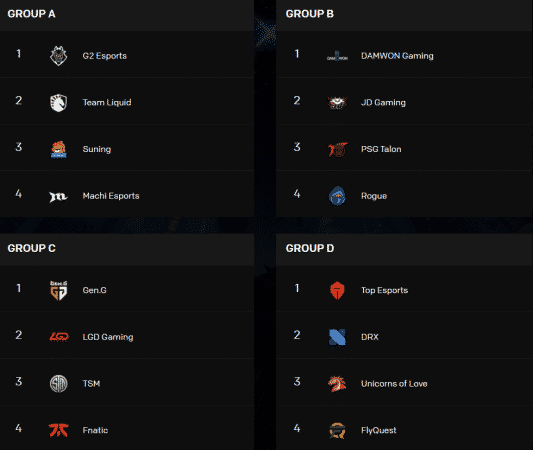 When it comes to Group A, G2 are clear favorites to win alongside Suning. Personally, I feel that Suning is a bit overhyped and has the ability to be upset by Team Liquid with their pair of former world champions to guide the way. Machi is a bit of a wildcard and may be able to put out some impressive showings. Although, I don’t think they’ll have enough to take out the other titans in their group. Second and third could go either way between TL and Suning, but first and fourth should be secured.

This is by far the most difficult draw to find your favorite team in, especially if you’re a Rogue fan. Standing above them are two monsters of a World’s roster in DAMWON and JDG. I think DAMWON edges out over JD and both teams should qualify with relative ease. Competing for the bottom half of the group PSG and Rogue which could honestly go either way.

Weep for the west and Top on top

Honestly, if you ran Group C through a simulation ten times, you’d probably get 10 different results. In terms of hope, it could go any way for these teams as they all have relatively equal skillset. Gen.G is most likely going to come out of the group with the most wins but they have crumbled under the pressure before. Between the other teams, it’s a three-way coin flip on who has the better drafts to secure their position in the standings. Something in me says LGD will be able to pull themselves from the ashes and upset TSM and FNC fans alike, but I also wouldn’t be surprised if they choked again.

Group D houses the second most difficult group of teams in the draw between TOP and DRX. Top Esports themselves are already being written off as the eventual winners of the World Championship and on paper, it should be fairly easy for them. DRX is essentially budget DAMWON and will most likely have a dominating performance over the Unicorns of Love to secure their group exit. At the bottom, we find FQ who sadly just can’t cut it against these teams. There’s a small chance of an upset against UOL for third but on a typical day, FQ doesn’t beat any of these teams.

Let’s go Liquid! (NA please make it out of groups) 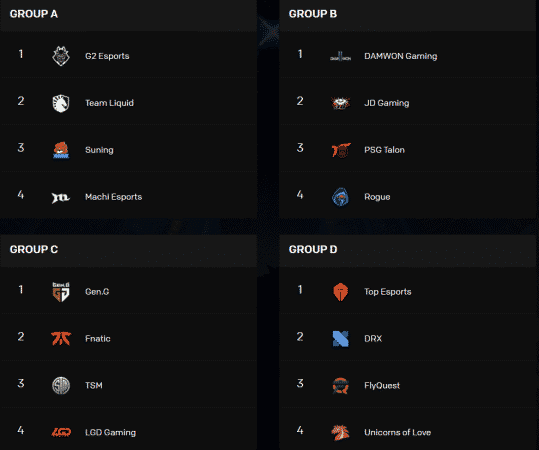 I’d be lying if I said I knew anything about Machi Esports, so let me brush them under the rug as fourth place and pay attention to the other three.  I have G2 Esports coming in first. I feel that G2 always has a strong idea of how they want to play the meta and usually show up strong in the group stage. Then I have Team Liquid coming in second and Suning in third. Realistically if I had no NA bias, I most likely would have Suning over Team Liquid. However, I think that Team Liquid getting the extra practice in play-ins might be a big enough boost to push them over the Chinese third seed.

For Group B, JDG and DAMWON are two powerhouses that were hard to choose between, but I put DAMWON over JDG because Showmaker is just too good at League of Legends. I then have PSG in third because I was impressed by their play-in performance and Rogue coming in last.

I think Group C is going to be extremely close and quite honestly I think anyone has the potential to make it out. That being said, I think that Gen.G is the best in the group followed by Fnatic being a close second. My heart wants TSM  to make it out of groups. But I’ll still watch all their games with my fingers crossed hoping they defy my expectations.

Group D was the easiest to make for me. I think that Top Esports is the favorite to win it all this year so putting them at first is no surprise. It’s possible for second, third, and fourth to get mixed up, but I think the safest bet is to put DRX as second and FlyQuest and UOL at third and fourth respectively.