The first day of MSI 2021 got underway, and what a day of matches it was.

It was certainly a Day One to be hyped about. Starting off with DAMWON vs Cloud9, and ending with PSG.Talon vs MAD Lions. Day One had a lot to offer for fans across the world. Hype moments, upsets, shocking plays, and hours of action. Read our recap of MSI 2021 Day One below.

In an unexpected turn of events, it was Cloud9 (“C9”) who managed to pull off the first blood. Canyon took the first drake but Cloud9 was persistent with their pursuit of the rest of DAMWON KIA (“DK”) as they took down BeryL. It was, however, short-lived as DK quickly made up for the mistake by taking down Blaber in his own jungle. C9 continued to take hold of the match; a 2v2 in the bot lane went their way before a drake fight saw C9 picking up two more kills. While it was still early, C9 was showing up.

Both teams continued to trade blow-for-blow as the game reached the 20-minute mark. Despite C9 having four kills, DK remained ahead on gold, though C9 had a one drake lead. Moments later, it went all wrong for C9 as DK pulled the trigger and took down three members of C9 as they turned the screw. Within another minute, C9 contested DK on the map and it was the same story again. DK chased down a retreating C9 and it was another three easy kills for DK.

Afterward, DK took down a free Baron and pushed in the C9 base with it. Firstly, mid lane fell rapidly, as did the bottom lane as DK looked for a moment to engage and closed out the match. They found their play with a Mega Gnar Ultimate as they pushed C9 aside. DK started their tournament in perfect fashion. 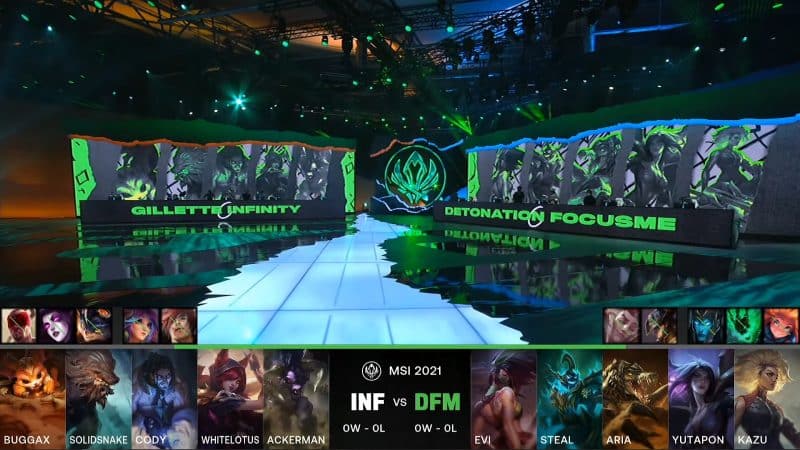 It was a quick early game 1v1 solo kill for Gillette Infinity (INF) as Cody took down Aria and massively boosted his side’s chances of taking this first game. It went from good to better for INF when they picked up another kill in the 2v2 in the bot lane and DFM struggled to get into the game. In a frantic opening 10 minutes, DFM was able to get a kill on the board and close the gold gap to just 500k.

DFM started to come back into the game at the mid-way point. Crucially, a double misplay in the top lane by INF allowed DFM to pick up two big kills and they found themselves ahead for the first time in the game. The game state continued along this same path as the game approached the 20-minute mark. Here, both teams seemingly realized the game was hanging in the balance. Just as the timer was ticking over, a 5v5 fight broke out, despite the early two kills, DFM lost one in return and the game stayed in DFM’s favor for now.

DFM were the ones to pull the trigger on a potentially game-winning fight. In it, they got the first kill but INF counterattacked when DFM overextended. INF took down four members and an easy Baron as the game swung back into their favor. With Baron, INF looked for the top inhibitor, and though it looked rough at the start they’re able to take down all five members of DFM to make a huge step in their quest to qualify for the Knockout Stage of MSI.

Pentanet.GG vs Royal Never Give Up It’s a dream start for the underdogs as they managed to pick up a huge pick on RNG inside the PGG jungle. While no more kills happened by the 10-minute mark, RNG started to dominate with superior map play as they moved to 2k ahead. Then RNG decided to finally pull the trigger and that’s it. They picked up two kills in a 3v2 bot side fight and stretched the lead to over 3k.

Next, a 5v5 fight breaks out in the bot side of the map. At first, it looks like it’s going the way of PGG after they picked up two kills. RNG, however, pulled it back and Ace’d PGG. It looked like a last-ditched attempt to stay in the game from PGG, with RNG moving to 6k ahead. RNG picked up a free Baron and another kill as PGG collapsed.

With the Baron, RNG pushed the bot side of the map, Ace’d PGG, and took down the bot and mid lane Inhibitors. RNG decided to take their time, but with a 13k lead, it was all but over for PGG. Within seconds of being back on the Rift, RNG moved to the top side and PGG’s game was over. They would play right after, however, as they looked to pick up their first win.

Pentanet.GG vs Unicorns of Love 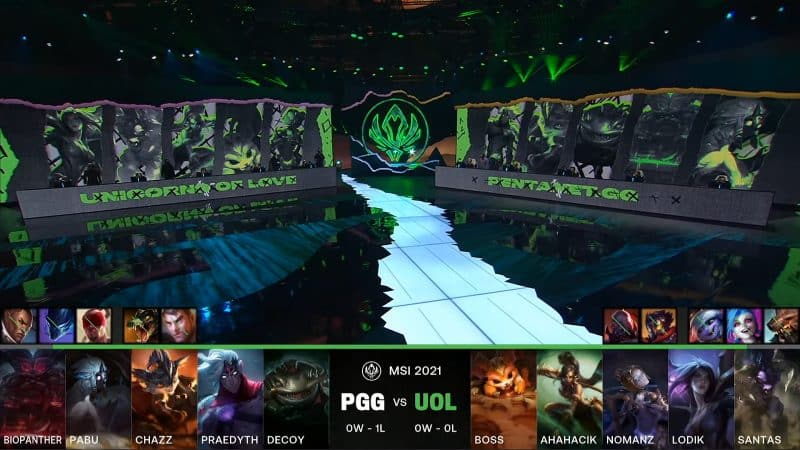 This a much slower game than the rest we saw on Day One. By the 9th minute, we finally saw the first action on the Rift as it’s UOL that secure first blood. However, PGG traded back with the first drake. But UOL continued to keep up the pressure, and as the game approached the 15-minute mark, they moved to 2k ahead while PGG struggled to find a way into the game.

With the drake going down, a fight breaks out in the jungle. Pabu is caught out badly and is run down by UOL, however, some quick thinking from Praedyth saw PGG get something back in return. Much like how the game started, the game slowed down in the middle to late phase. It took until the 25th minute for much to change, with UOL turning up in the mid lane to take down two members of PGG.

UOL pushed through the bot lane and flexed their strength, and PGG couldn’t do anything about it. Multiple PGG members fell quickly. With the Inhibitor there down, and four members dead, UOL took down the base and claimed a massive victory. 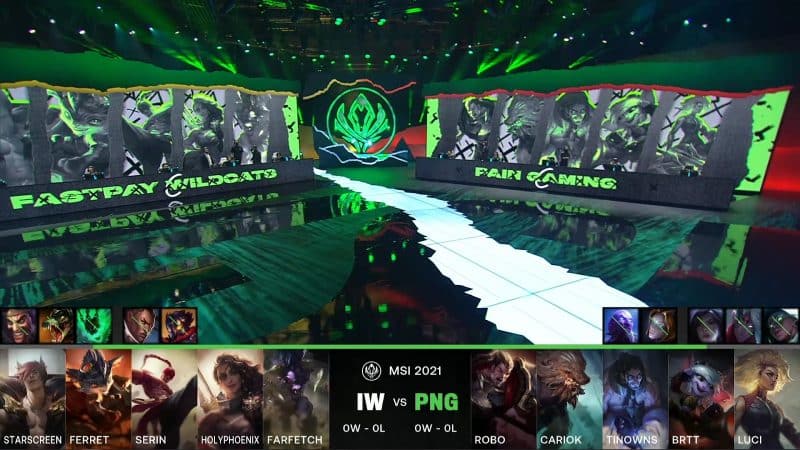 First blood went to IW when they won a bot lane 2v2, as the fifth game of the day goes into overdrive a lot sooner than the previous match. After this good start, IW doesn’t let up. PNG tried to dive the top lane but StarScreen was more than ready for it. As a result, he takes two champions down and things go from bad to worse for PNG.

The back-and-forth continued, with PNG finally getting some kills on the Rift, but it was IW that took a 10-minute 3k lead. But after that, the game finally calmed down and IW maintained their lead into the Baron phase. The lull allowed PNG to take a breath, as they too began to prepare for a Baron fight. As was expected, there was a fight and it went the way of IW in the early phase, with the side picking up three kills. However, Robo on the Darius had other thoughts on being Ace’d, as he took down four members of IW. They chased down the last member as suddenly this one-sided match was blown wide open.

After such a fight, IW seemed to have completely lost control of the game. With PNG pushing their mid-tier 1 turret, IW seemed unaware that their top lane Inhibitor was being destroyed. The ensuing play saw PNG move well into the lead for the first time in the match. PNG broke the base, taking down all the inhibitors and leaving just one Nexus turret. However, IW is able to make a valiant hold as they stay alive for a little longer. PNG again pushed into the IW but once again failed to take down the Nexus. It’s the third time that’s the charm for PNG as they finally win the game and take down IW. 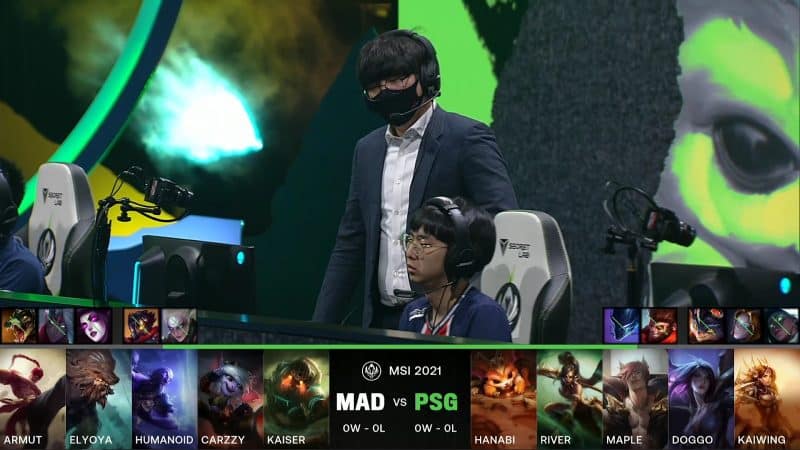 Despite losing their red buff at the very beginning of the game, MAD are the ones to pick up the first blood, and followed it up with a second. From here, things just kept getting better for MAD, as they picked up yet another kill and moved to 1k ahead after only six minutes. PSG finally got onto the board with a bot lane play but it came at the cost of three kills going in MAD’s favor. PSG saw an opportunity to come back but ended up sinking even further behind.

In the next few minutes, MAD made a few misplays though. Humanoid was the first to fall in the mid lane before Kaiser was caught out in the enemy jungle. Regardless, MAD remained 3k ahead, but kills had started to fall onto PSG members. MAD managed to pull it back with a series of kills across the map, and crucially, four kills at the 20-minute spot saw them move to a 6k gold lead. With Baron up, MAD secured it and again squeezed PSG out of the match.

With Baron, MAD took down the top and mid lane Inhibitor as they looked to win the series. After resetting to their base, MAD resumed their push through the PSG base and that was all she wrote. They even ended on the style play of Ryze sending his team on a Realm Warp into the enemy fountain to get an extra kill before dropping the Nexus.