LoL: LPL Playoffs Recap – Round One And Quarter Finals

The world’s deepest league kicked off their playoffs with back to back rounds of thrilling, must-see matches.

The weight of Worlds rests heavily on every team entering playoffs, and that fact holds true for the league that produced our reigning champions: Fun Plus Phoenix. Strangely enough, FPX isn’t even one of the top five teams coming into the Summer playoffs. Their decent Spring split translated into a mediocre Summer and they just barely secured the 8th and final spot. That fact alone should show you just how strong this league is. But enough about the past – let’s find out what went down this weekend.

Victory Five versus Fun Plus Phoenix 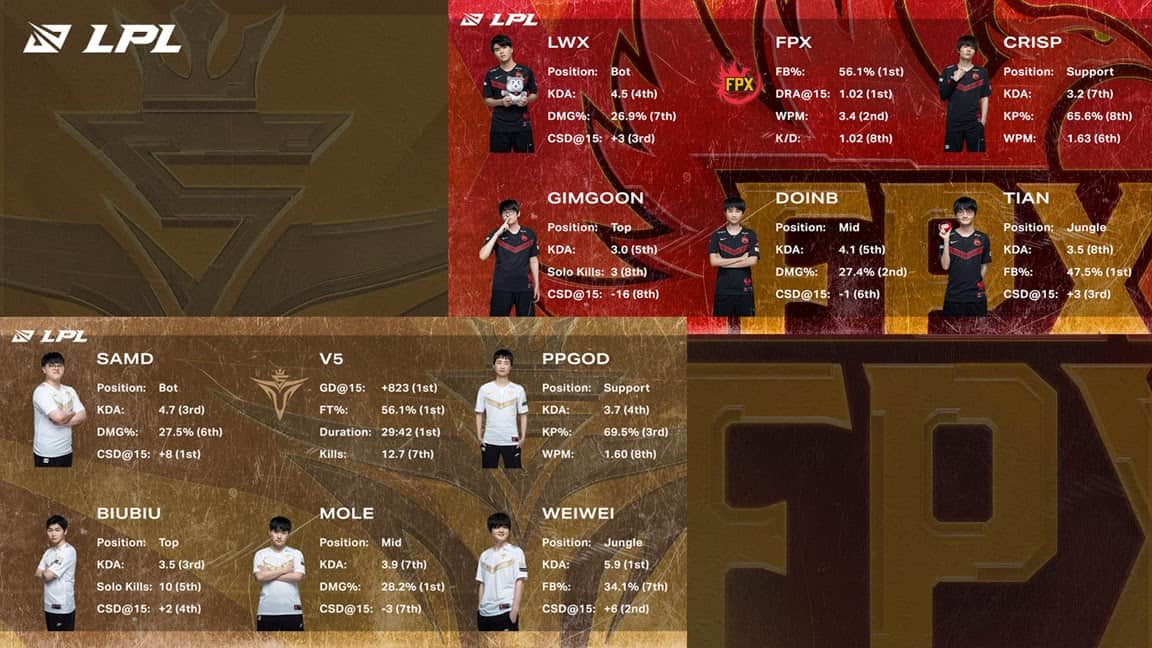 Victory Five had a miracle run story not unlike Europe’s loveable underdogs Schalke 04. They had an abysmal Spring split going 0-16 resulting in a near-complete rebuild. V5 then managed to shock the league by earning 5th place. They were rewarded for their efforts with an opportunity to show the world they aren’t just a fluke by taking on the World Champions: Fun Plus Phoenix.

Even though FPX came in as the 8-seed, they were still favored in this matchup. The LPL uses a best of three series for regular-season games, and FPX beat V5 in their match-up earlier this split.

Game One started off hot with FPX doing a level one invade of V5’s red buff. Gao “Tian” Tian-Liang secured both the buff and first blood. However, it was all downhill from there courtesy of Li “Mole” Hao-Yan on Zoe. Lee “Samd” Jae-hoon also had a fantastic game going 6/1/10 on Senna, but watching Mole dance around with Zoe making FPX look silly was truly entertaining. FPX learned quickly not to sleep on V5.

Game Two was the Guo “ppgod” Peng show. On Tahm Kench, ppgod was omnipresent, using Abyssal Voyage to teleport all around the map to gank enemies and start big plays for his team. He even got away with solo killing Lin “Lwx” Wei-Xiang for a tasty double-kill. FPX put up a decent fight in the mid-game and managed to not only steal a Baron, but secure a second one later in the match. Unfortunately, these desperation plays didn’t translate into a win. With Mole at the helm, V5 emerged victorious and put themselves in a position to sweep the World Champions.

FPX finally came up with a formula for success in Game Three. Most of which included DoinB doing world-class things, like denying V5 the mountain soul and then getting a quadra-kill during the aftermath. His Orianna play was inspired, and he managed to carry his team to victory despite the continued pressure from V5 making things tense.

Game Four was by far and away the best match of the day. Both teams fought valiantly to try and secure a win. V5 brought out Lucian to play top and Yu “Biubiu” Lei-Xin played it to perfection. Biubiu on Lucian and Samd on Caitlyn resulted in a barrage of bullets that proved too much for FPX to fight through in the late game. The World Champions fell with a whimper and Victory 5 secured their spot in the Quarter Finals.

LGD Gaming versus Team WE 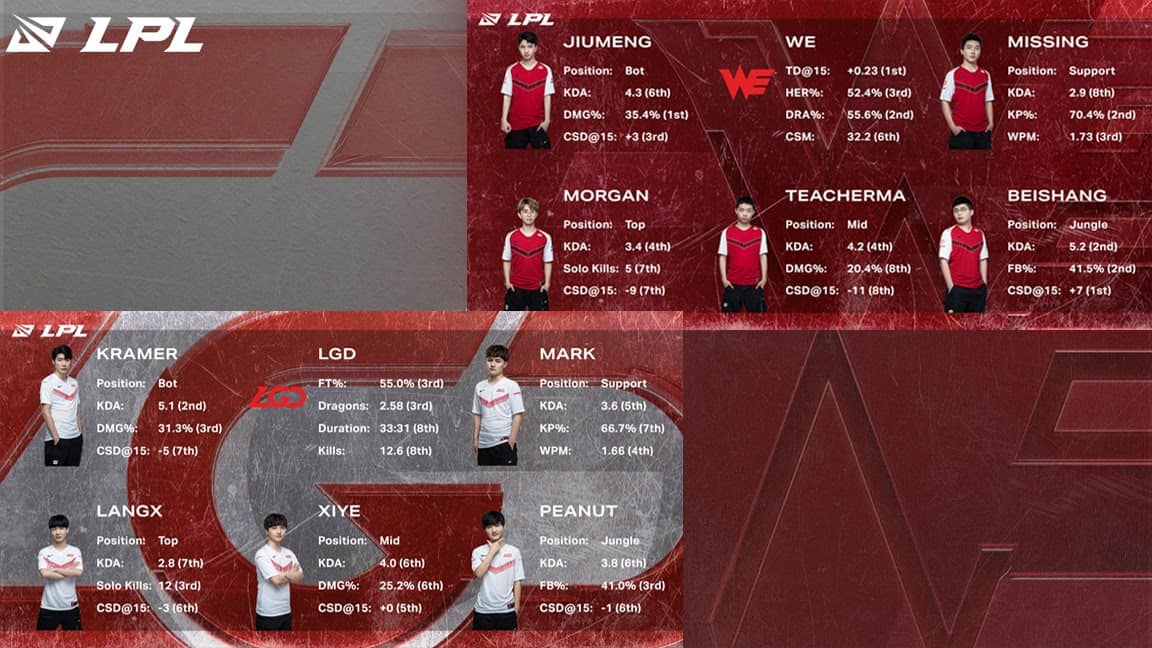 LGD and WE had very similar splits ending with very similar records. Both sides lost most of their games to better teams above them, but then also had some inexplicable losses to teams they should’ve beaten. LGD was favored in this one mostly due to the better record and consistent play style.

Game One started with WE securing the first dragon, something they are known to accomplish at a ridiculous rate. However, WE got punished in the next dragon fight. WE chased after LGD after losing the dragon, but without any damage follow-up, their team got deleted. LGD was able to snowball from there for an easy win.

Game Two was a little more of a steady pace with LGD taking most of the objectives on the map in the early game including both dragons and a Herald while WE focused their attention on the bottom turrets. WE showed signs of life by winning the dragon fight to prevent an Ocean Soul going over to LGD and then securing the first Baron.

Unfortunately, the first Baron came at a price. Su “xiye” Han-Wei went OFF in the Baron pit and got himself an unofficial Penta Kill because Ha “Kramer” Jong-hun wound up stealing the last kill. To be fair, Kramer was also dealing a bunch of damage in the fight and deserved at least one kill for his efforts. LGD was unable to secure the Ocean Soul on the next dragon as well, but it didn’t matter. The resulting team fight was slow and methodical as LGD bullied their way into the enemy base and took down the Nexus.

Game Three was all Team WE. They dominated early getting the first three dragons and winning team fights. LGD put on some pressure in the mid-game and almost stole the game away. WE traded the Ocean Soul for the first Baron and won the ensuing team fight in the Baron pit. With most of their team on death timers, LGD couldn’t stop the siege and WE avoided the sweep.

The first fight of Game Four might as well be a metaphor for the series: WE appears to have the advantage only to fall flat on their faces and fail miserably. LGD was the better team and made the better plays, and Game Four was no different. Much like Game One, LGD dominated the whole game and punched their ticket into the Quarter Finals without breaking a sweat.

The Baron throws are real. 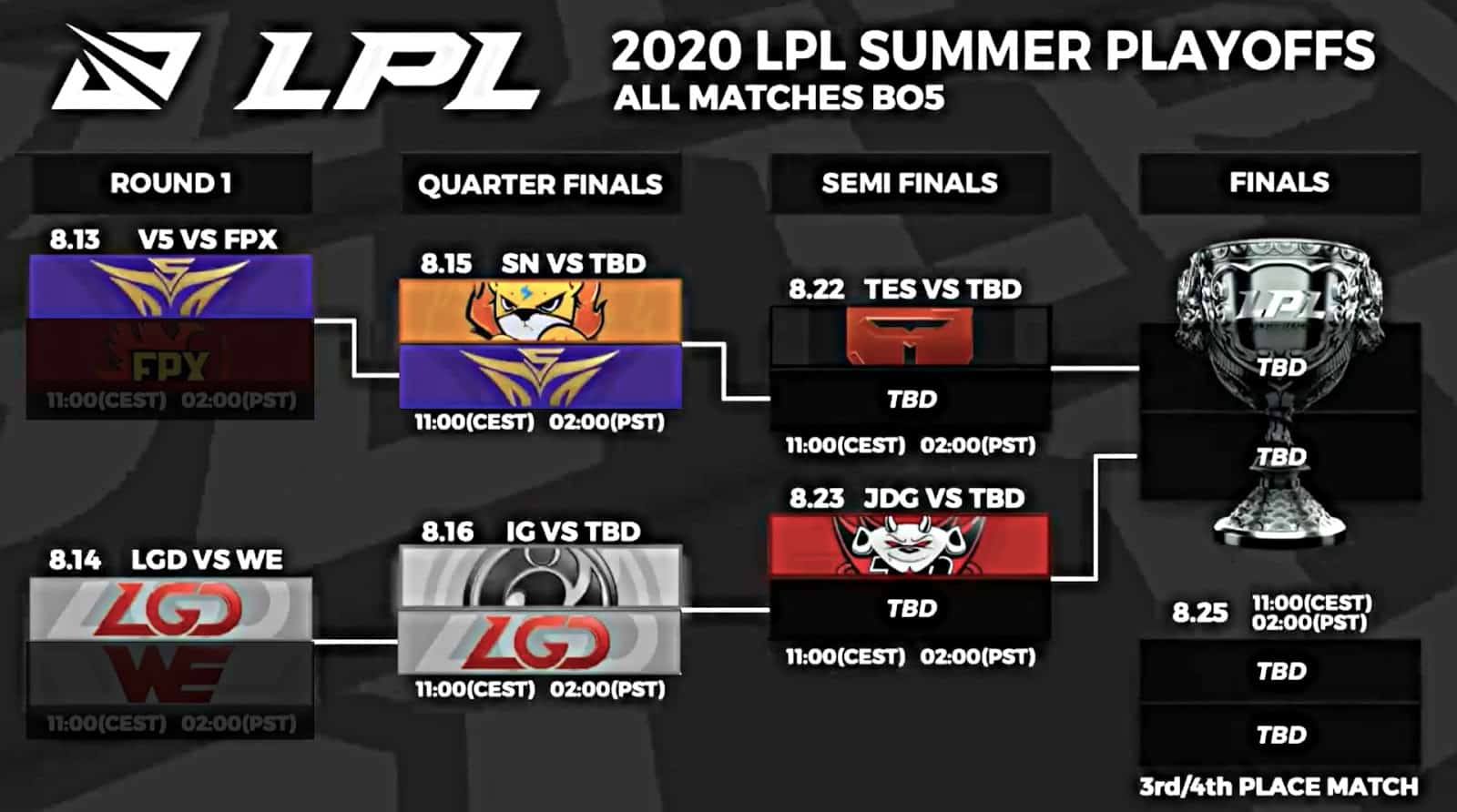 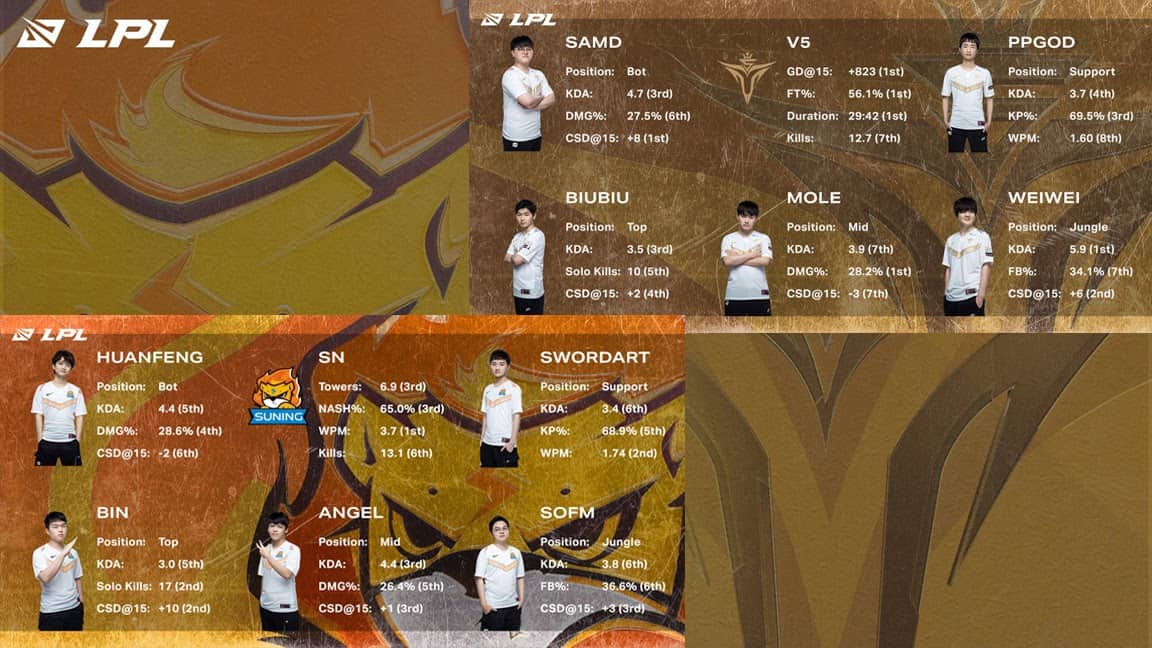 Welcome to the Quarter Finals! First up is a great matchup between two very different play styles. Suning likes to control the map and let their team composition prove itself better than the opponent whereas Victory Five live and die by the sword playing aggressively for quick wins as well as quick losses. SN won the regular-season matchup, but V5 held their own in those matches. Who will come out on top and move on to the Semi-Finals?

Game One was wild. Things started off promising for V5 getting the first two kills on the enemy top laner. Their focus up top, however, led to SN being able to control the entire bottom side of the map. As a result, they easily secured the first two dragons. SN, playing around a masterful performance on Lee Sin by Le Quang “SofM” Duy, used this momentum to get even in kills and establish an early gold deficit for V5. The game looked to be heading in the direction of SN when they started up the first Baron, but Li “Mole” Hao-Yan had other ideas. A cheeky smite resulted in an unlikely steal throwing the game on its head and giving V5 the strength they needed to push into the enemy base and secure victory.

V5 with the EXPLOSIVE teamfight to nab the comeback win and take a 1-0 lead! #V5Win pic.twitter.com/GQhS3Dh1oE

Game Two found SN discovering a crucial weakness in the armor of V5. Mole got to play Zoe, arguably his best champion, and SN were able to shut him down hard. Things started with a sense of familiarity with some early game kills from V5 while SN focused on objectives and map control. Things took a turn for the worse when SofM and Xiang “Angel” Tao started focusing on Mole. Olaf and Syndra proved to be too much pressure for little Zoe to handle and she became completely irrelevant. The rest of V5 didn’t provide much support and they weren’t able to make another comeback in Game Two.

SN fights through a back and forth game 2 to tie the series up at 1-1 #SNWin pic.twitter.com/vKuy5kV5Cq

Game Three and Four can be summed up as a result of the discovery in Game Two. Mole had a terrible rest of the series and without their star mid-laner performing at his best, the rest of V5 crumbled. They even subbed in Wang “y4” Nong-Mo for Samd at ADC, but it made no difference. SN was able to control the chaos throughout the rest of the series and secured a seat in the Semi-Finals as a result.

This is what we call a landslide victory #SNWin #LPL pic.twitter.com/qk26dN3vd3 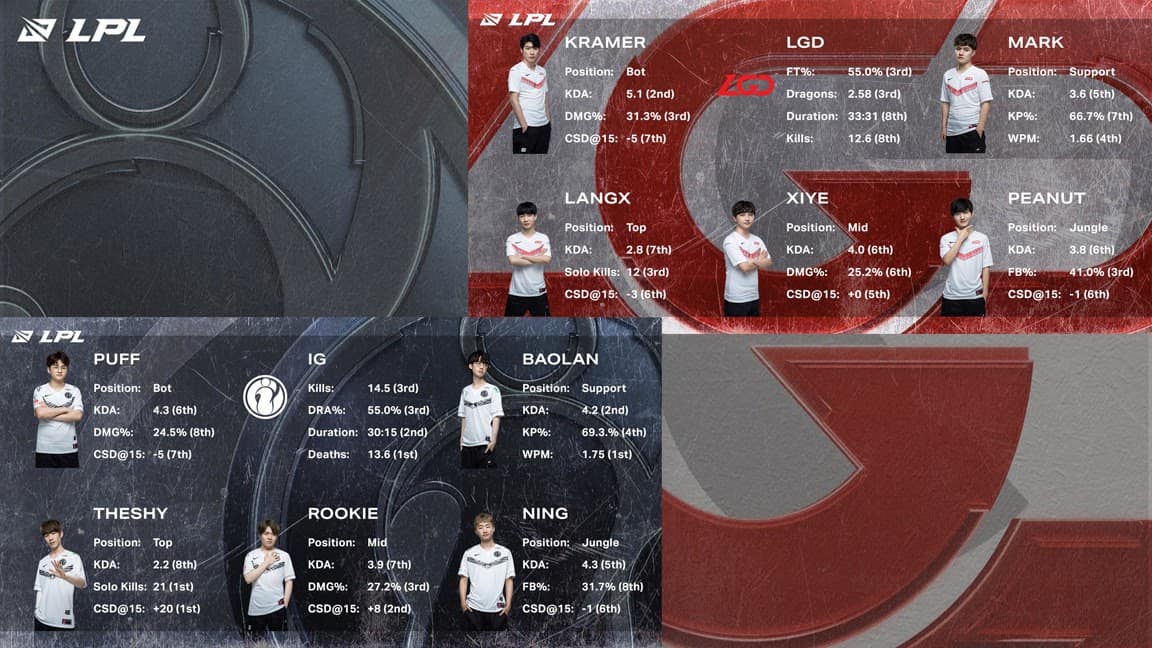 You may recall that Invictus Gaming was recently a World Champion back in 2018. They had a great split this summer only losing four times and finishing 3rd overall. One of those losses, however, was to LGD.

Everyone really wanted this to be a good series because, well, a bunch of 3-1 matches don’t really give us that much-needed sense of competition. And, to be frank, they weren’t all that close either. Though it is only the first two rounds, so some lopsided affairs are to be expected. Can you guess which way this one fell?

If you’re like most fans, you’d bet on the previous World Champions. LGD was given a mere 10% chance to win the series by onlookers. Never tell LGD the odds because they will just ignore them. Game One was dominated by LGD. IG was super aggressive in the beginning, but LGD was able to match it and come out on top. A crucial team fight over the third drake started by Ling “Mark” Xu’s Leona put LGD on top and they never looked back. They went straight to Baron and then started their siege to end Game One.

Game Two was a little more back and forth. Both teams play aggressively, but save a few picks, this game was mostly spent farming in the early game. Then 20 minutes hit and all hell broke loose. IG caught out an overly eager Su “xiye” Han-Wei for an easy kill, but the rest of LGD collapsed on IG and dismantled them. Not only did they pick up three kills, but they herded them into the Baron pit and took Baron right after. It was a huge play that left LGD in the driver’s seat on their way to the Semi-Finals.

LGD runs down IG in the river and grabs a 3-0 teamfight win! #LPL pic.twitter.com/pA1GvI01If

At this point, it was clear to see that LGD was on a mission and IG forgot how they got here. Game Three played out much the same with more desperation fights from IG. Ultimately, IG was sent home with their tail between their legs. It was a strange upset, but IG only has themselves to blame. LGD, on the other hand, made a serious case for themselves for Worlds. 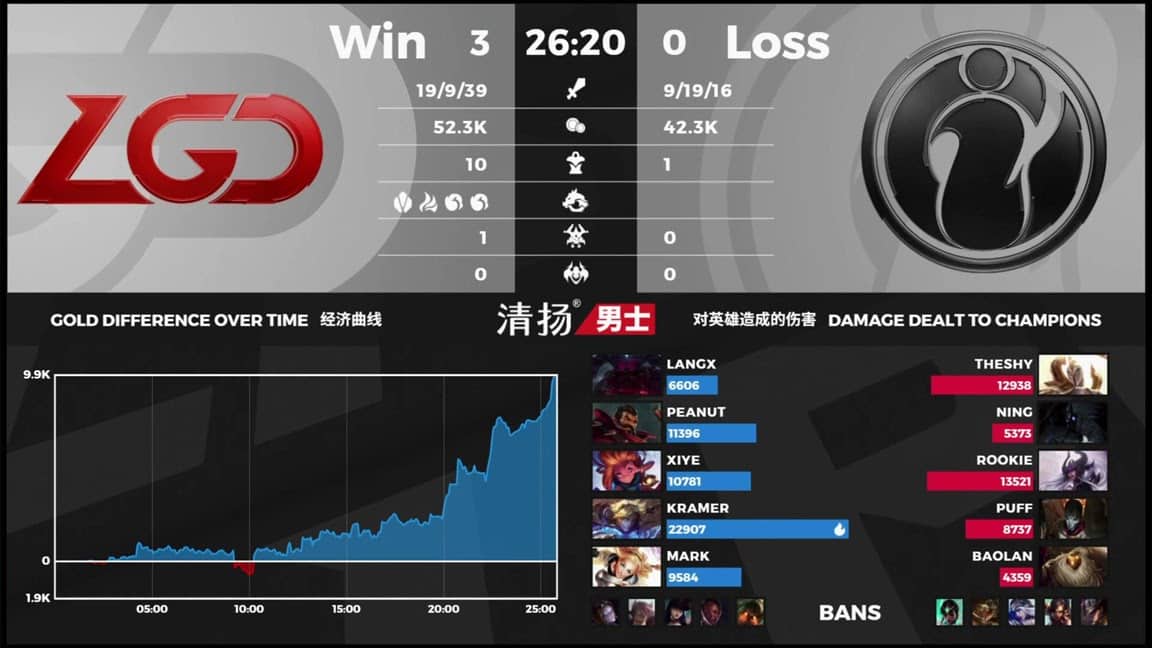 Stay tuned for our predictions on the Semi-Finals coming out early this week. It should be an exciting group of matches as the best teams in the world duke it out for the trophy.