The stage is set for a potential Spring Final rematch, unless LGD Gaming can do something about it.

We saw a very lopsided affair in yesterday’s semi-final matchup between Suning and Top Esports. Today’s semi-final promises to at least be a little more even, or so we hope. LGD Gaming has looked very good despite a middle of the pack finish to the split, while JD Gaming will try to show the world why they won it all in Spring.

The early game seemed like each team was testing the waters, trading blows back and forth on both sides of the map. The gold stayed even throughout much of the game. Then things started to ramp up after a Spellbook Smite from Su “xiye” Han-Wei allowed LGD to steal the first baron.

IF PEANUT IS THE KING OF THIEVES, XIYE IS THE PRINCE OF THIEVES! #LGDWin pic.twitter.com/dz8iDsIT7s

JDG took the steal personally, however, and managed to not only get soul point by securing their third dragon – they also got a clean ACE afterward. This made baron number two much easier to take uncontested.

JDG gets a clean 5-0 sweep ACE over LGD! #JDGWin pic.twitter.com/wwtNz0ofly

It was all downhill from there. LGD still put up a good fight, mostly on the back of xiye, but they were no match for a Mountain Soul and a baron buff as JDG stormed the base and took Game One. 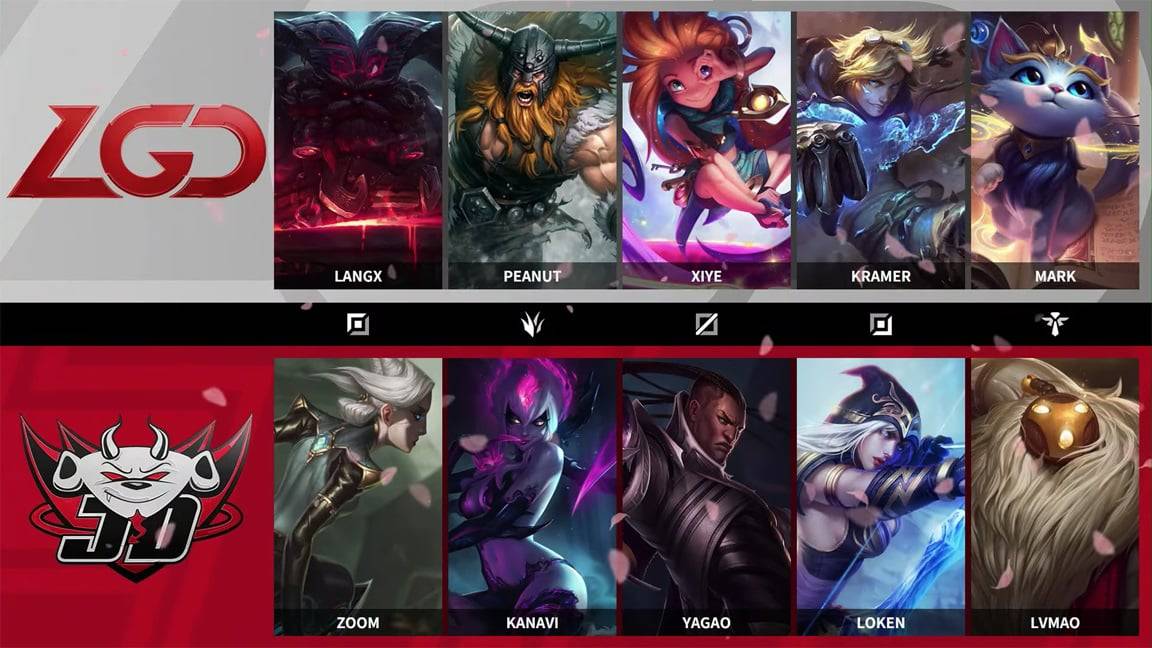 LGD probably felt fairly confident in being able to beat JDG despite losing Game One. Though, those thoughts evaporated quickly after Game Two.

It was almost painful to watch as JDG racked up 19 kills in under 20 minutes. Seo “Kanavi” Jin-hyeok was just one of the stars for JDG pulling out Evelyn and playing her to perfection. The support around Kanavi made team fights almost look too easy for JDG.

A MASSIVE TEMPERED FATE SEALS THE FATES OF THIS TEAMFIGHT. #LPL pic.twitter.com/lh5zpiQToe

Needless to say, Game Two ended quickly and LGD would do well to forget that game ever happened, though, another semi-final sweep now seemed inevitable. Credit to LGD. Game Two would have made many want to retire from professional League of Legends, but instead, they took it as a wake-up call. LGD got back to the game plan and controlled the bot side and took every dragon they could. LGD held the lead in kills, gold and of course dragons throughout the early game.

The win was all but certain once we entered the mid game, but it still took LGD almost 40 minutes to close it out. They secured Ocean Soul and the baron to help take the enemy Nexus. LGD fans – this is the game to watch. While Game Three proved why LGD was here, JDG was playing for something bigger. A win in this series would punch their ticket to Worlds for the very first time, and they did not want to be denied again.

LGD wasn’t going to go down easy, though, as both teams fought valiantly around the dragon to try and get any advantage they could. LGD were trying once again to get soul point, but were denied by a Kanavi smite. The ensuing team fight was chaotic and ferocious leaving the last few members of both teams on the brink of an ACE, but somehow walking away with slivers of health.

It's a dragon pit of death! #LPL pic.twitter.com/nbkgaODZwQ

JDG took full control from there getting a free baron and slowly building a gold lead. LGD stayed within striking distance, but the wealth gap was never in jeopardy and LGD couldn’t do anything to change that.

"AS THE NEXUS CRUMBLES, THE WORLD TREMBLES!"

Congratulations to JDG, as another #LPL team confirms their #Worlds2020 debut! #JDGwin pic.twitter.com/zpaKLKaaJo

On a positive note, JD Gaming get to go to Worlds for the first time and every player on the team will also be going to their first Worlds. We look forward to another exciting LPL Final with the new kings – JD Gaming and Top Esports – battling it out for the top spot.

Congrats to everyone on @JDGaming, as this will be the first Worlds for everyone on this roster! #JDGWin #Worlds2020 pic.twitter.com/AAe3bRTo5Y