With a Week One victory for Fnatic, they set themselves up for a big match against Schalke “Miracle Run” 04.

After some criticized the Fnatic roster for the way they ended the Spring Split, they showed up against SK Gaming in Round One. While Schalke 04 are in this series because they lost, they more than held their own against G2 Esports, taking them to five games. Fnatic vs SK Gaming was a series that people had hyped up, and for good reason.

First Blood was picked up by S04 when Hylissang looked to stop Neon’s recall but S04 caught him out to get an early lead. Fnatic quickly made up for that loss by picking up a kill in the top lane before a one-for-one trade came in on the bot side. While Fnatic had an early lead, it was a slender one. Fnatic kept up the pressure, but it was S04 that took the advantage in the mid lane as they countered the Fnatic mid lane engage to take down both members. S04 then claimed the mid tier-1 tower before the 10-minute mark pushing their lead to 3K at that early stage.

S04 continued to apply the pressure into the mid-game. While the Fnatic bot lane tried to engage with the help of Nisqy, they lacked the damage as S04 increased their early lead to nearly 4k. After picking up a couple of important picks across two separate engagements, Fnatic started to close the gap as they tried to knock down the S04 mid lane turret. The 23rd minute would see the game’s first big 5v5 team fight, and it went to S04, as they picked up three kills, losing just two in return. S04 also managed to take down the drake, stalling out Fnatic’s Soul point for another five minutes.

In a play that would cost Fnatic the game, they failed to stop the S04 Baron play, then hesitated on the following play and lost three members. S04 took the opportunity to claim the Fnatic mid lane inhibitor and one of their Nexus towers. With another Baron buff S04 storm the Fnatic base and Fnatic had nothing to stop it. Mid game mistakes and early game misplays cost Fnatic as S04 took an easy Game One victory. 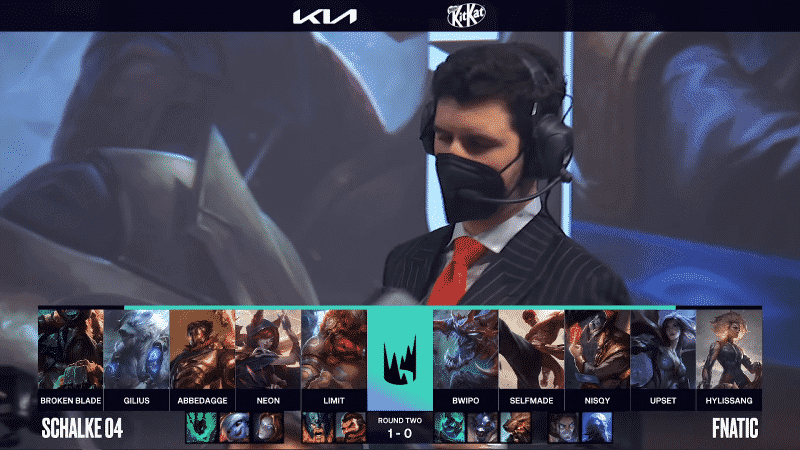 Gilius did in Game Two what he did in Week One. He waited in the top lane for Bwipo to walk forward and punished him hard. S04 got an early First Blood as they looked to punish Fnatic’s less than conventional composition. A huge fight broke out in the top lane, and it’s S04 yet again that came out on top as they took down four members of Fnatic, losing just two in return. Upset attempted to get something back in the bot lane but was unable to take a kill. Shortly after, Fnatic executed a four-man collapse onto Neon but lost mid tier one in the process as S04 moved 2k ahead.

In what looked like a desperate attempt to get back into the game, Fnatic made two plays on the top and bottom sides. The top lane tower dive went terribly, with the bot side gank not netting a kill either. With those misplays, S04 went on to claim the mid tier 2 and win another team fight around the drake. From this, they went 5k ahead. Fnatic went all in for a hail mary play, and despite getting serious damage down onto Abbedagge early, they completely crumbled under S04’s damage. As a result, the game looked completely gone with S04 moving to 10k ahead.

Fnatic tried one last play to flank S04, and in what was quickly becoming the story of this series, Fnatic failed to make it stick. S04 easily took down the Fnatic base as S04 moved onto the match point. 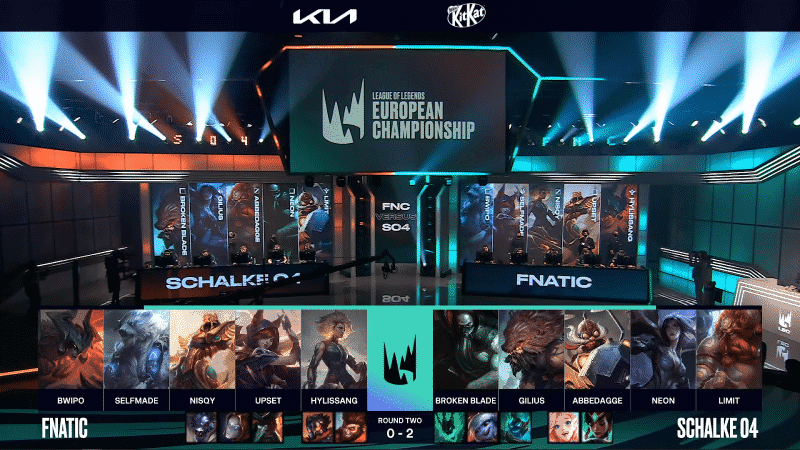 The first nine minutes were slow, but Gilius made a heroic play to steal the Infernal Drake on a 50/50 to claim the drake but lose a kill in return. Nisqy also managed to pick up a kill 1v1 in the mid lane as Fnatic looked to get an early lead. S04 finally found a play to get themselves into the game, punishing a miss-play by Selfmade. The ensuing fight saw Fnatic come back into the fight as they cemented the lead. With blood in their eyes, Fnatic tower dove Abbedagge, and it all fell apart. He’s able to pick off one under the tower, and with Bwipo chasing him down, Abbedagge is able to make a massive outplay as S04 took the lead.

From a 2k lead, Fnatic found themselves 2k behind just five minutes later, after a series of miss-plays, and out-plays saw them drop the lead. S04 lost a previous fight, as it looked like Fnatic had found a way back into the game. With S04 doing so much targeted damage they wipe Fnatic off the Rift and take down the Baron. With Fnatic staring down playoffs elimination, everything was on the line.

Hylissang again tried to make a hero play but S04 was more than ready for it. They took him down and the rest was history. Collapsing on the rest of the Fnatic front line, S04 marched into the base and took down Fnatic. The loss saw Fnatic end the split in 5th place, their worst showing since 2016.

Outriders Servers Down, Reported Issues For PlayStation, Xbox, And PC