G2 Esports fought very hard against Schalke 04 to end the series on a nail-biter Game Five finish in the LEC Spring Split Playoffs.

G2 Esports had a very interesting opponent in the form of Schalke 04 in the LEC playoffs. S04 looked very promising at the start of the split after defeating several heavy-weights but gradually were out-shined by the lower-ranked teams in the tournament. Everyone questioned their potency however, as in this series they showcased what they are actually capable of and gave a tough competition to G2 Esports.

G2 Esports will play MAD Lions/Rogue next in the upper bracket and Schalke would be facing the likes of Fnatic in the lower bracket.

The first match of the G2-S04 Playoffs series started very slowly as both of the teams were looking to read the play style of one another. The bottom lane saw G2 Mikyx find a great engagement and the team focused on the enemy Alistar. However, G2 Jankos went a little too deep with the tower dive, giving First Blood to S04 Neon. Schalke 04 snowballed their lead to get two more kills, taking down G2 Caps in the mid lane and going 3-0 with the kills.

However, just when the lead was turning gigantic, G2 Esports caught the enemy support and initiated a solid team fight, with G2 Caps coming at the perfect time to answer S04 Abbedagge’s Teleport in the bottom lane. As a result, G2 got away with no deaths and equalized the three kills deficit that they had in the early game.

At 21 minutes, S04 Gilius over chased the Corki, resulting in his death by G2 Rekkles in the mid lane. Following that, G2 Esports got two more eliminations to secure the Baron. After that, they split up, applied pressure on the tier-two mid-bot towers and slowly secured objectives on the map. With G2 Esports taking the game away from Schalke 04, they looked to defend the Infernal Dragon and prevent G2 from securing another objective. But, G2 Esports was ready with the answer back as they finished the dragon and chased the opponent to their base, securing multiple kills on the way. After Acing the team, G2 Esports marched to the enemy Nexus and cracked it open to start the series. 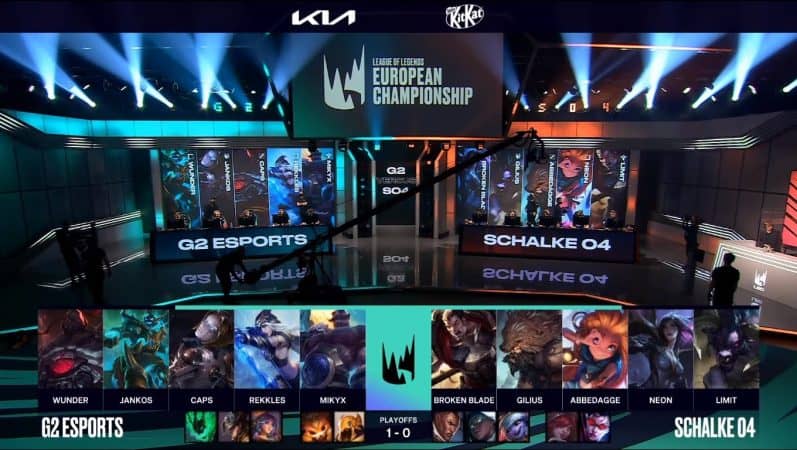 The second match had an interesting drafting phase, with Schalke 04 banning five ADC picks for G2 Rekkles and insta-locking Darius in the last pick to counter the Sion. The teams changed their playstyles completely and went aggressively for kills in the early game. While the teams actively traded kills, the first major team fight occurred near the Rift Herald at 11:40 minute. Here, Schalke 04 fought furiously to gain control of the objective and not allow G2 Esports to take the objective for free.

G2 Esports, with the aid of Rekkles’ ultimate, found their moment to shine as well to again trade some of the kills. With skirmishes all around the map, G2 Esports slowly fed all the kills to their AD carry Rekkles. He eventually stood with a 7/0/0 KDA. He and G2 Mikyx were spotted by S04 recalling which allowed them to shut down both the players with G2 Jankos forced to use his ultimate to flee for his life. After this, G2 Esports utilized the Ashe ultimate to find favorable fights and G2 Rekkles dealt enormous amounts of damage to the frontline to force fights with the opponents. One of these team fights led to Baron and G2 looked to push their leads by securing towers.

Schalke realized the match was slipping from their hands but they got the fight that they wanted in the 28th minute when G2 Rekkles was in the base. They won the fight despite losing three of their players. However, G2 Rekkles was farming in the top lane with G2 Mikyx when Schalke 04 forced a desperate fight which didn’t go in their favor at all and made things easy for G2 to collapse on them and secure the second game of the series. 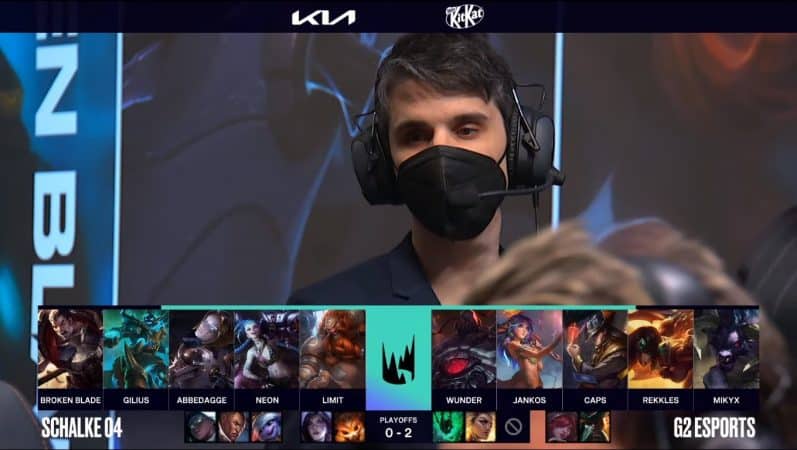 With two games down, Schalke 04 needed a strong miracle comeback to prevent the clean 3-0 sweep from G2 Esports. G2 missed a ban in the drafting phrase which created a little problem for them as they gave away Hecarim for free to the enemy on the blue side. S04 started the match strong by getting First Blood on G2 Wunder’s Sion pick which further showcases the power of Darius in the early game.

Just like the second match, the teams were out for blood as they skirmish heavily in the early game. Both the teams traded kills on different windows however, after a certain time Schalke 04 executed the team fights perfectly and created an indestructible lead for them taking down multiple members of G2 Esports. They punished G2 Esports for over chasing S04 Abbedagge and returned with shutting down Rekkles. At this point, G2 was losing fights after fights and scraping with whatever they could. S04 Gilius made sure that the dragons were going down right on the spawn counters. At the soul point dragon, G2 tried another desperate team fight however that too resulted in a disaster as S04 ended up winning that team fight and securing Mountain soul for themselves.

After that, S04 Broken Blade’s Darius got a Pentakill to ace the G2 Esports team and finally get the much-needed victory to keep Schalke 04’s hopes alive in the playoffs series. 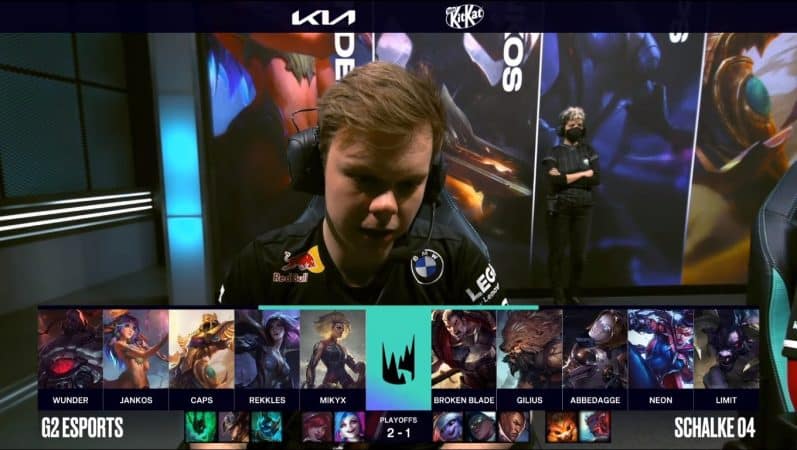 With the momentum gained from the last match, Schalke 04 had nothing to lose going into match four and they dominated the early game gathering four kills. S04 Gilius secured the first two dragons of the match and G2 Esports had to do something to become relevant in the match. They started picking enemy champions and slowly mitigating the lead that Schalke had over G2 Esports. They equalized the gold difference and took great team fights set up by G2 Mikyx’s Rell to find picks on the map. Each of these kills meant in G2 Jankos securing the Ocean Dragons for the team and making a clear way for the soul.

Just when everything was going solid for G2 Esports, they started the Baron at 23 minutes and it was Smited early by S04 Gilius making the way for G2 Jankos to easily smite and take the baron for themselves. However, S04 Abbedagge stole the Baron with his ultimate and backed up after securing the objective. After that, G2 Esports secured their third dragon moving closer to that pure Ocean soul and Schalke punished them in that as well.

A battle of Smites

While the second Baron was started by Schalke 04, G2 Esports didn’t compete with them and rushed towards the final Soul point. Sensing this quickly, Schalke rotated quickly towards the dragon and took control of the Dragon’s pit. S04 Gilius didn’t have Smite up as he used it for Baron earlier, but luckily for him, Jankos didn’t have it either. As G2 Caps was trying to burst the dragon, Udyr got his Phoenix Stance out and stole the dragon from G2 Esports.

After a few more kill trades, the Soul dragon was up contention for both the teams and Schalke tried to smite it but S04 Abbedagge again did the miraculous steal and secured the Ocean Soul for the team. After that, S04 got their third Baron of the game and rushed towards the base shutting down everyone in their path to tie up the series. 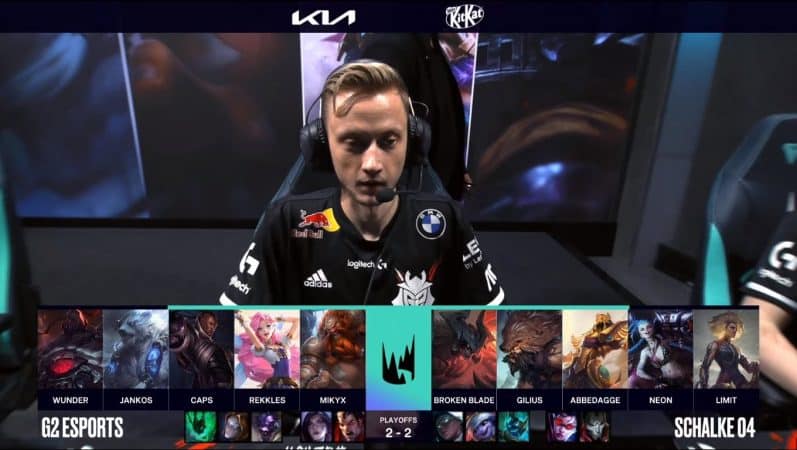 Do-or-die. The fifth match’s drafting phrase finally saw the ban of Darius who has been an absolute nuisance in the series for G2 Esports. S04 Broken Blade came back to his comfort pick Aatrox and looked to repeat the same group stage performance against G2. Rekkles saw the face of Seraphine who has been a great pick and sustains the heavy poke coming from the side of Schalke 04.

G2 Esports’ bot lane got the first blood to start the killings but it was traded pretty quickly by the enemy AD carry. G2 played the game very conservatively and took fights which benefited them and G2 Jankos secured the first dragon of the match. While the second dragon was started by Schalke 04, Jankos Smited the dragon and stole it from right under their noses. Moreover, while the third dragon was being solo done by Jankos it was stolen by S04 Neon with the Jinx ultimate to neglect the Soul point from G2 Esports.

After that, many team fights happened in the match with Schalke winning one of them and G2 Esports securing map objectives all around the map. G2’s macro plays made it impossible to challenge them and a very bad team fight during the Soul dragon makes it very easy for G2 Esports to take the baron, get the soul and run it down to Schalke’s base and end the series and claim the rightfully earned victory to their name.

In today’s video we trying something a little different im uploading this video has a raw no edited video. If you like tht let me know in the comments section. We’re playing a free game today called escape the underground and I really enjoyed it. If you wanna see a part 2 50 views and 10 likes Halo Infinite Devs Got Smash-Happy By Destroying A Piano For Unique Game Sounds