TSM and TL fought for their spot in the Finals tonight.

The final week of the 2020 LCS Summer Split is here. After weeks of competition, only three teams stand left to fight for the title. FlyQuest already secured their spot in the Finals with a win over Team Liquid (“TL”) last week, leaving TL and Team SoloMid (“TSM”) to battle for the second spot there. TSM is looking strong after a victory over Cloud9, but despite the loss to FlyQuest, TL is still on potential championship form, especially with their MVP support CoreJJ and coaching staff being recognized as some of the best in the league this split. As such, this was a highly anticipated matchup, so here’s everything that went down. 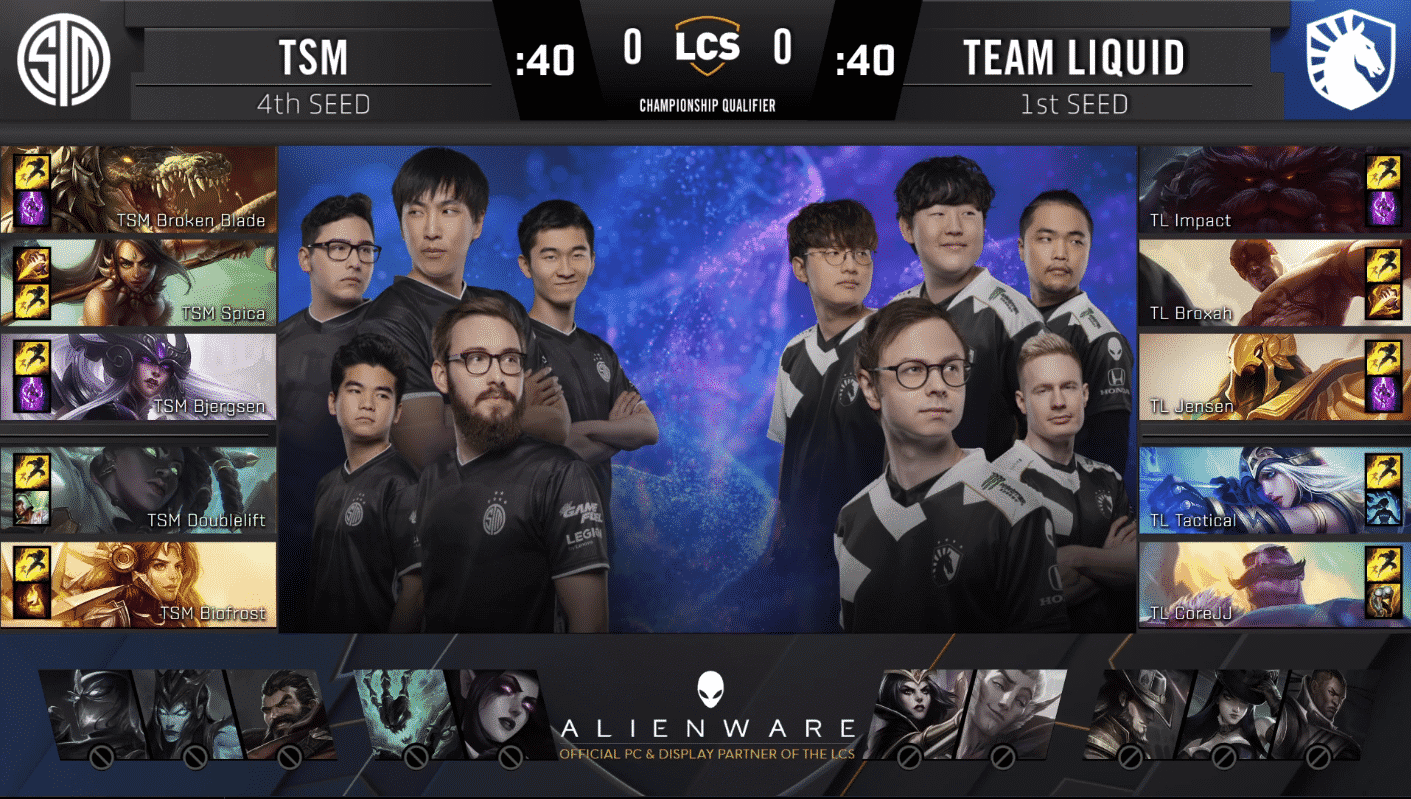 Game One set a great tone for the rest of the series, as it was action-packed all around. TSM looked fantastic throughout, with Doublelift killing Tactical for First Blood in the isolated 2v2 and Spica diving top to kill Impact too. Spica did misstep by trying to take an early Rift Herald, which led to TL getting the objective and a kill. But TSM easily bounced back when TL used Herald top. The whole squad collapsed on the play and went up two more kills.

From here, TSM was in firm control. They secured every dragon and won just about every team fight. The mid game was clearly in TSM’s favor but TL found hope at 26 minutes. Here, TSM grabbed the Ocean Soul but TL killed two for it. Seeing the opportunity, TL immediately went to Baron and claimed its buff. Unfortunately, TL’s Baron buff was short-lived as TSM killed multiple members before they could utilize it.

Now back in the driver’s seat, TSM readied themselves for Elder Dragon. There was a drawn-out fight for a couple of minutes leading up to it, where TSM managed to pick off TL’s jungler, Broxah, before turning to the Elder. The team fight kept on and TSM accumulated three more kills before returning to the Elder, securing that, then the Baron shortly after too. Equipped with both major buffs, TL had no chance of defending their base against TSM, and lost the first game to them. 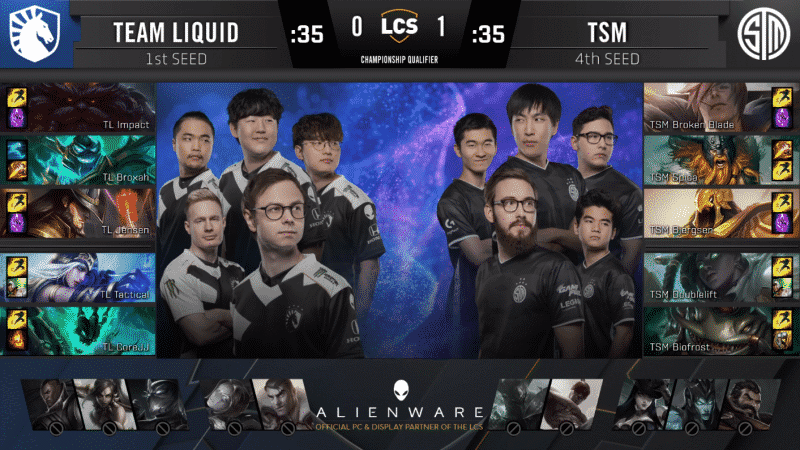 The action didn’t stop in Game Two, but did look different than the one before. That’s because instead of TSM having control most of the time, TL did in this game. They first wrested it from a nine-minute Herald fight, where they secured both the objective and First Blood for Broxah. This allowed them to break plates off the bot lane tower, which helped them knock it down for the First Tower bonus some minutes later. The fight around the second dragon was close but it was still evident TL was a tad stronger.

If there were any doubts about TL’s strength before, they quickly dissipated in the mid game. At this point, TL asserted dominance through multiple team fights. One at 15 minutes netted TL two kills, while one at 17 got them three. All the while TL accumulated three dragons and set themselves up at Soul point. TSM thought that they were clever when they snuck away a dragon from TL at 30 minutes, but funnily enough, TL was at Baron Nashor and took that instead.

Now with the Baron buff, TL was ready to rock. Despite the fact that TSM temporarily stunted their push with a minor team fight victory, TL regrouped at 35 minutes. Here, TL came up huge in a mid lane team fight, killing three TSM members quickly. The squad pushed forward after that, rushing the base. Doublelift was picked off trying to mount a defense, and without their ADC, TL easily pushed on and won Game Two. 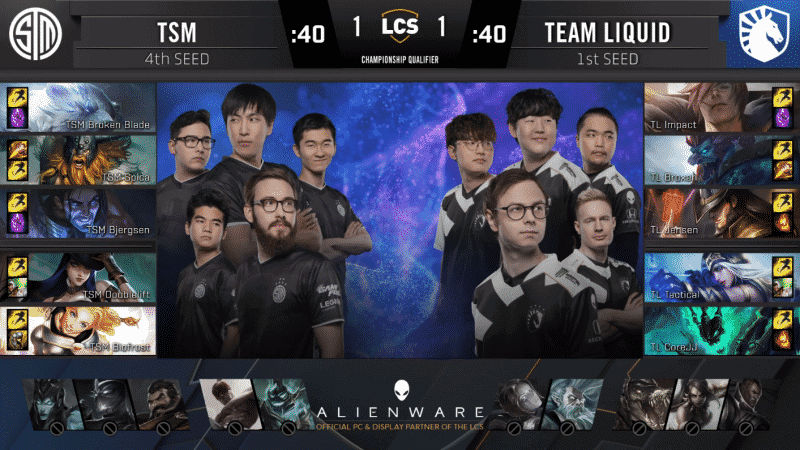 There was a bunch of back and forth in Game Three, but TL pulled the series to game point in their favor this time. It all started off with an ambitious bot lane dive from TSM, which went one for one, but Doublelift getting ahead with First Blood. After that, Broxah went on a tear, ganking and killing both of TSM’s solo laners. On top of that, TL secured the Herald, a Mountain Dragon and killed Biofrost. Everything looked great for them.

TSM did look like they could pull it back though. At 14 minutes, TSM won a team fight one-for-zero while TL claimed the First Tower bonus top. In addition, TSM secured the second Herald too. This led to them taking the mid lane tower. It all flipped back in TL’s favor at 19 minutes, however, as they won a team fight three-for-zero at the dragon pit. As a result, TL had a free inside track to the Baron.

Upon taking Baron TL began their push.  Only two towers crumbled from it though so they didn’t completely bust open the game. So the squad waited until 26 minutes where another team fight erupted for TL to get three more kills and a second Baron. This one proved much more potent than the last. It allowed TL to take the mid and top Inhibitors and establish map control. The final nail in the coffin came at 33 minutes. At that point, TL took one more team fight to get three more kills. TSM couldn’t defend in the 2v5 and lost their second Nexus in the series. 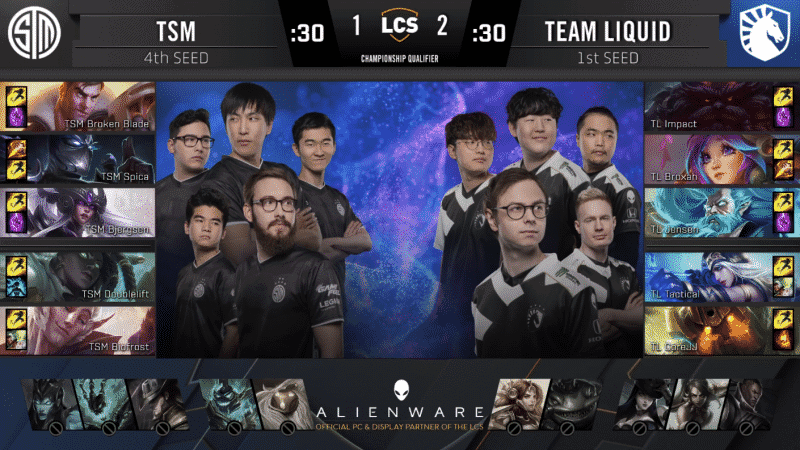 Game Four was a hell of a slugfest with a nice reward at the end for TSM. Despite them getting the win, TL didn’t make it easy. They got off to an early lead due to a two-for-zero team fight bot. However, TSM bounced back by winning a couple of skirmishes themselves and a pick onto Impact. During the early/mid game TSM also got things like the First Tower bonus, Rift Herald and dragons.

But once in the mid game, TL started to pick it up a bit. They won a couple of fights one-for-zero before slowly gaining map control. As a result of this, TL was able to rush and take a free Baron at 29 minutes. Unfortunately, TL really couldn’t get anything done with this buff and two fights stalled it out. At 36 minutes, TL procured another Baron but this time TSM collapsed and killed two. Now that TSM was up to members it was easy for them to secure the next dragon, which gave them Ocean Soul.

Finally, at 42 minutes, TL tried to get a third Baron. This time, TSM was there even quicker, and Spica Smite stole it away! No one dropped in the ensuing fight but TSM did claim the Elder Dragon after too. With both buffs TSM made short work of TL’s mid Inhibitor. A couple of minutes after that, a team fight happened in TL’s jungle that went two-for-two. That initial play was even but TSM hid in the jungle and ended up catching three members out. Death timers were very long this late in the game and this helped TSM claim their second Nexus of the series and bring it to a Game Five. 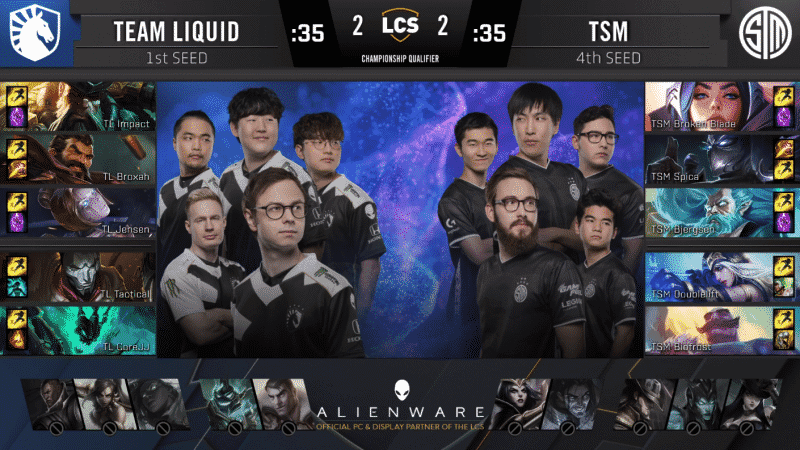 It all came down to one final game. The winner here stamped their ticket to the Finals, while the loser ends as NA’s third seed. With the pressure on, both teams were ready to perform and it was a great game. Spica started off the action with a very quick gank bot at two minutes to get Doublelift First Blood. Broxah responded a minute later by ganking top to help Impact kill Broken Blade, but he did pay his life for it. In the following minutes, TL did manage to find two winning fights and a pick though.

TL had a lead and grew it with the First Tower bonus. TSM was definitely still in it though, as they secured a couple of dragons. After these plays, the game slowed down noticeably. For the next 10-ish minutes, there were a couple of tower takes and kills, but nothing of real consequence. The action resumed at 31 minutes and picked right back off. Here, a team fight resulted in a two-for-zero in favor of TSM, which also resulted in a Baron for them.

This Baron was huge for TSM, as after winning another team fight five-for-one, it gave them the tools to take the bottom Inhibitor and deny TL the Cloud Soul. That concluded TSM’s first Baron buff, but at 38 minutes, TSM had full map control and secured a free, second Baron. TSM put a stranglehold on TL now. It all led to a final, fateful fight at 41 minutes. TSM was in the TL base and TL tried to mount a defense. It went horribly, as TSM obliterated TL, Ace’d them and took their Nexus.