Evil Geniuses and FlyQuest took to the Rift in the second playoff series.

The LCS playoffs are officially in full swing! TSM and Golden Guardians battled it out to advance in the Winner’s Bracket yesterday, while today, the LCS All-Pro team results were released and Evil Geniuses (“EG”) and FlyQuest (“FLY”) fought in their own best-of-five. Here’s everything that went down in this matchup!

With so much on the line, both teams came out swinging in game one. Swain and Hecarim made their debuts this game, which appeared to be very strong picks. This was especially true for PowerOfEvil’s Swain, as it was the benefactor of a gank and First Blood by Santorin. Things got even better for him at a six-minute dragon fight, where he secured two more kills, while no other FLY member died.

It looked rough for EG now, but they quickly kicked it up a notch. A group of them picked off WildTurtle on his way to the bottom lane, while Huni solo killed Solo with his Hecarim in the top lane. A few minutes later, Huni even took the First Tower bonus by himself, though FLY grabbed a second dragon shortly beforehand. From here, it was very close. The teams traded objectives across the map and found picks of their own. They even picked up a big shutdown on PowerOfEvil.

But then everything fell apart for EG. At 28 minutes, a team fight erupted near the dragon pit, where FLY was looking for their Soul. Here, PowerOfEvil solo zoned out four EG members, while FLY focused fire on one. After that, FLY ruthlessly chased down EG and killed them all for an Ace. As a result, they secured Moutain Soul and Baron too. It only took one more dominant five-for-zero team fight from FLY to push through bot lane and pick up their first win in the series. 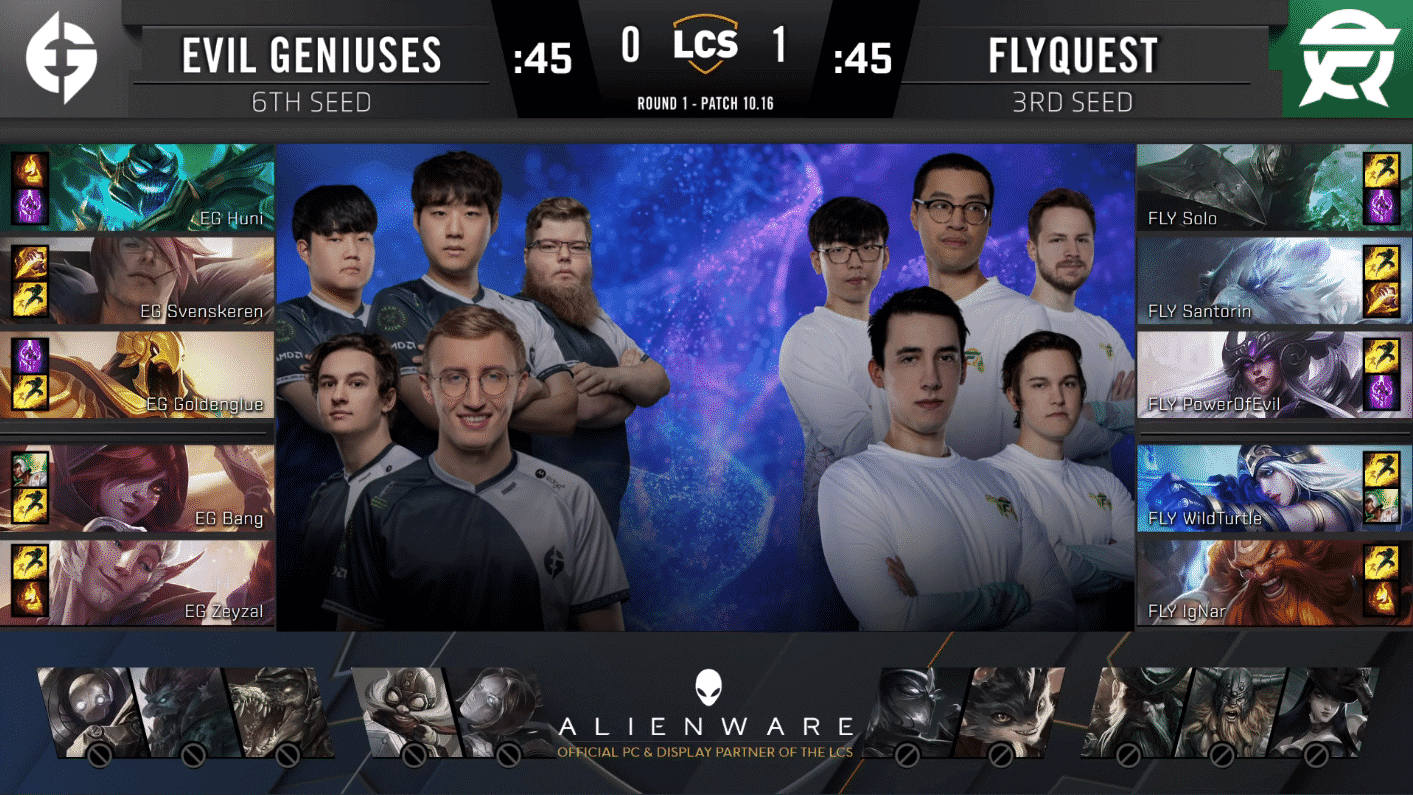 The second match of the series was a crushing defeat for EG. though they lost the first game too, they at least looked competitive, but FLY ran on clinic on them here. It all began with a level one invade, where PowerOfEvil was given First Blood again. Exactly like the game before, too, he received two kills at a six minute dragon fight and started off 3/0.

Then FLY turned up the pace. At 12 minutes, a team fight exploded in the bottom side of the map, where FLY collapsed and snagged five kills for one. The next fight around dragon was, to EG’s credit, fairly close at two-for-two kills, but FLY still secured the Ocean Dragon. Two minutes later, at 17 minutes, yet another fight began. this time in the top side of the map. EG started it off by getting one quick kill, but Solo’s Mordekaiser showed his strength by brute-forcing two kills in his favor.

To be fair, the game wasn’t totally out of EG’s hand yet. But it soon would be. At 21 minutes, both teams met at the Cloud Dragon. With blood in their eyes, another team fight blew up, where Solo once again was massive. He obliterated multiple members of EG and helped his team kill four EG champions without losing a single member. After that, it was easy to take the Baron. Once equipped with the Baron buff, FLY mercilessly pushed their lead, killing EG’s champions multiple times each as they pushed towards their Nexus and crumbled it. 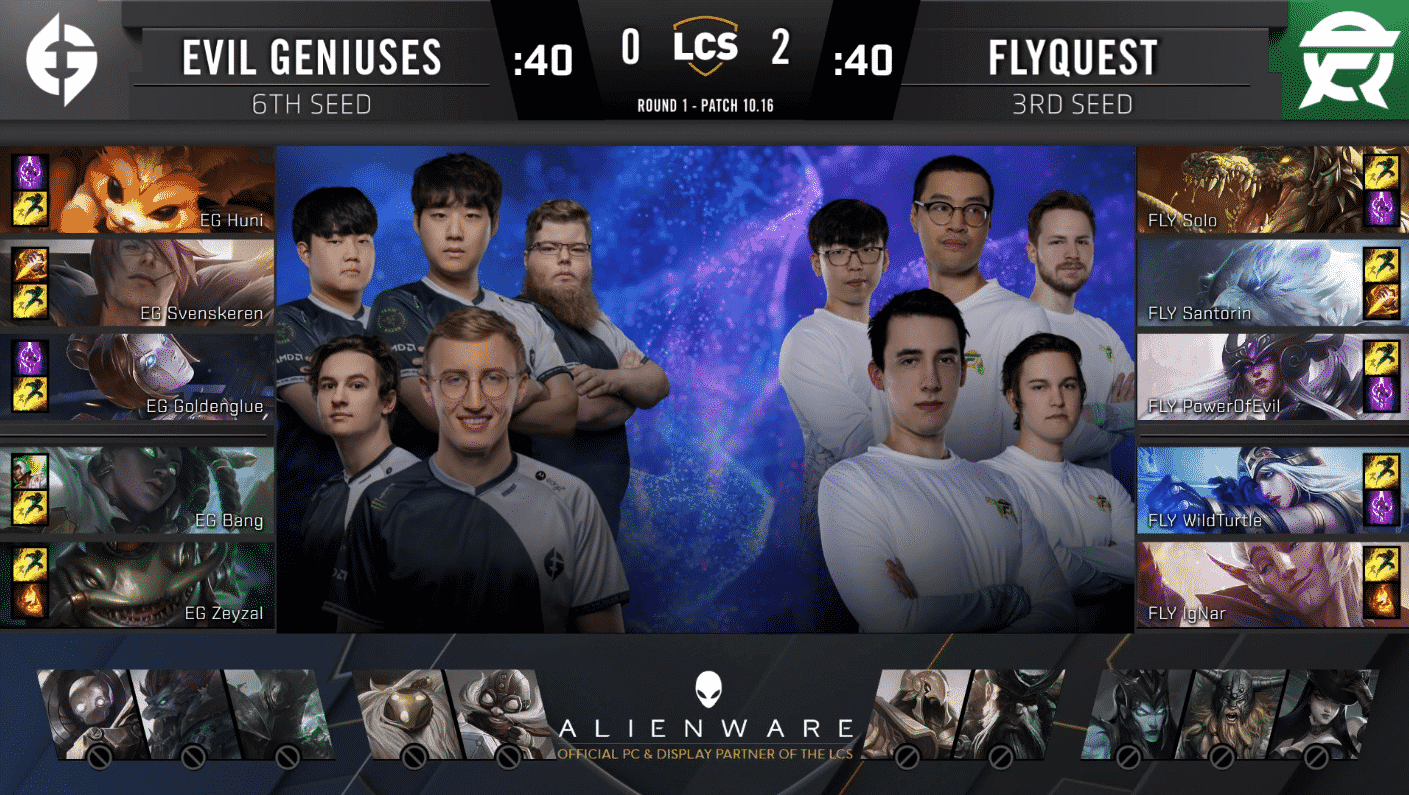 Finally, with their backs up against the wall, EG stepped up to the plate. In fact, they had a very strong early game. It started with the top lane, where a 2v2 there resulted in Huni securing First Blood onto Santorin. From there, EG took an Infernal Dragon and a Rift Herald, but when they tried to use the Herald top, it hit minions instead and never charged. FLY then collapsed on the play to pick up a swift kill.

EG kept their lead with a pick onto IgNar, though did drop a couple of objectives to FLY. The mid game was a stalemate, with both teams setting themselves up at two dragons a piece. At around 30 minutes, it turned into a tense dance around Baron though. FLY kept trying to rush it but EG responded appropriately and denied it. This caused the game to stall out for quite a while.

The back and forth continued for a few minutes, until a mid lane fight broke out at 37 minutes. Here, WildTurtle made a horrible positioning mistake, getting caught by an Orianna Shockwave with his Flash up. To make matters worse, after he got hit by a Senna W, he finally used his Flash, but only brought the inevitable root into PowerOfEvil. With both main carries rooted, EG instantly jumped at the prime opportunity set up before them. It was a slaughter. EG cut down four FLY members in the blink of an eye and proceeded to push straight into the FLY base and take their first Nexus of the series. 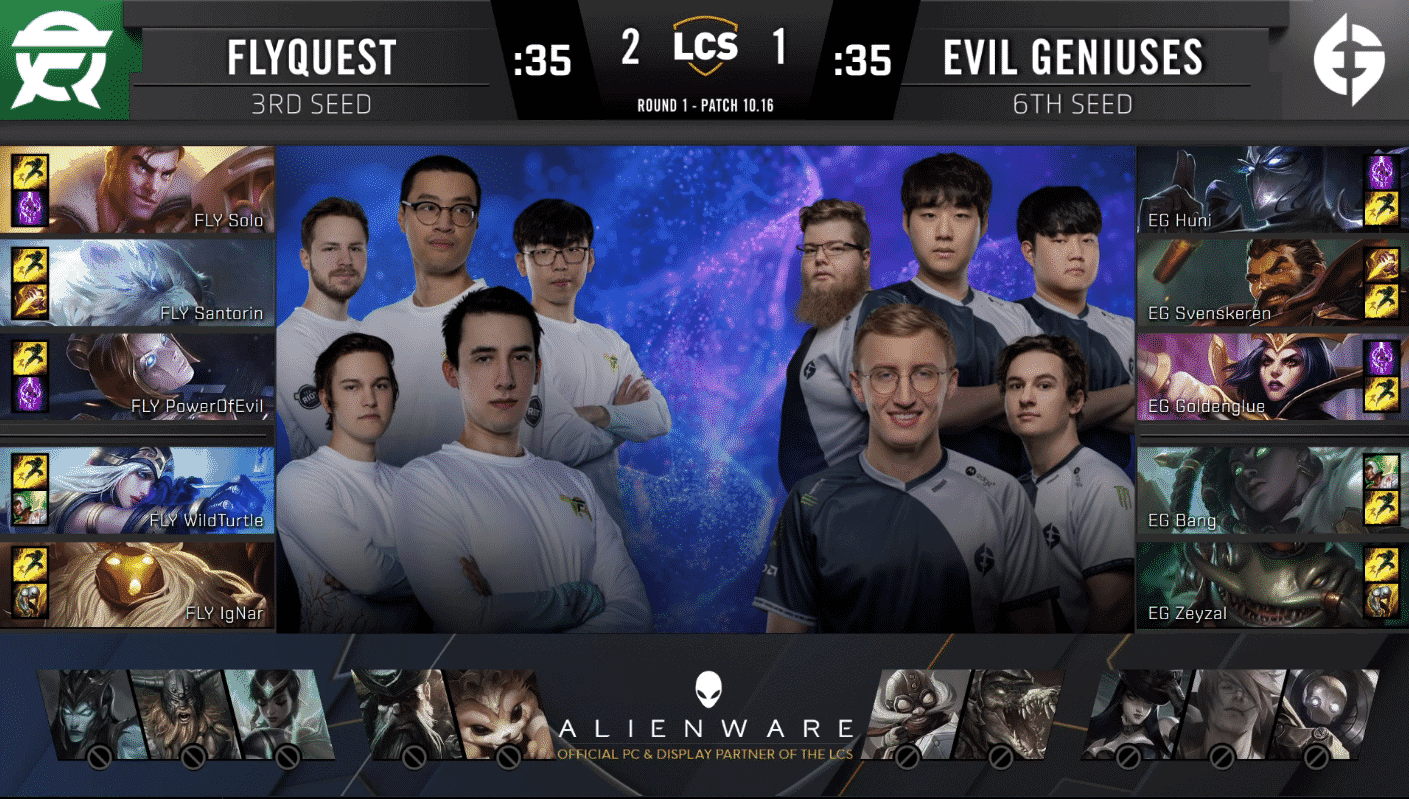 Game four was a tense back and forth, but in the end, EG pulled off another win. Fans could feel the tension in the early game here, as both teams tried to make plays but not overextend too much. As a result, there were only a few objectives taken. First Blood came out at a late 15 minutes, when EG three-manned Solo in the top lane and got Goldenglue a kill. A minute later, Huni and Goldenglue worked together again to get another kill onto Solo.

With this lead, EG felt like they were in charge. Their pressure was immense and FLY could feel it. The relative stalemate continued until 29 minutes. This was a major turning point, as FLY set up a play onto Goldenglue in the side lane. They killed him quickly, but EG collapsed. This worked in their favor though, as it meant more kills. FLY ended up with a four-for-zero team fight victory with a Baron to boot.

From here, common knowledge would say FLY was in the lead, but that wasn’t true. In fact, they tried to contest the EG Ocean Soul take, but during the ensuing fight at the pit, they only went one-for-one. Critically, EG got the Soul though.

Disaster truly struck for FLY at 37 minutes. Here, EG picked off IgNar, which led to essentially a free Elder Dragon AND Baron Nashor. This double uber buff was way too much for FLY to handle, and EG picked apart their opponent’s base. They demolished all three Inhibitors fairly easily before pushing further, grabbing a few extra kills and smashing their second Nexus. The stage was set for a potential reverse sweep game five. Cue up Silver Scrapes. 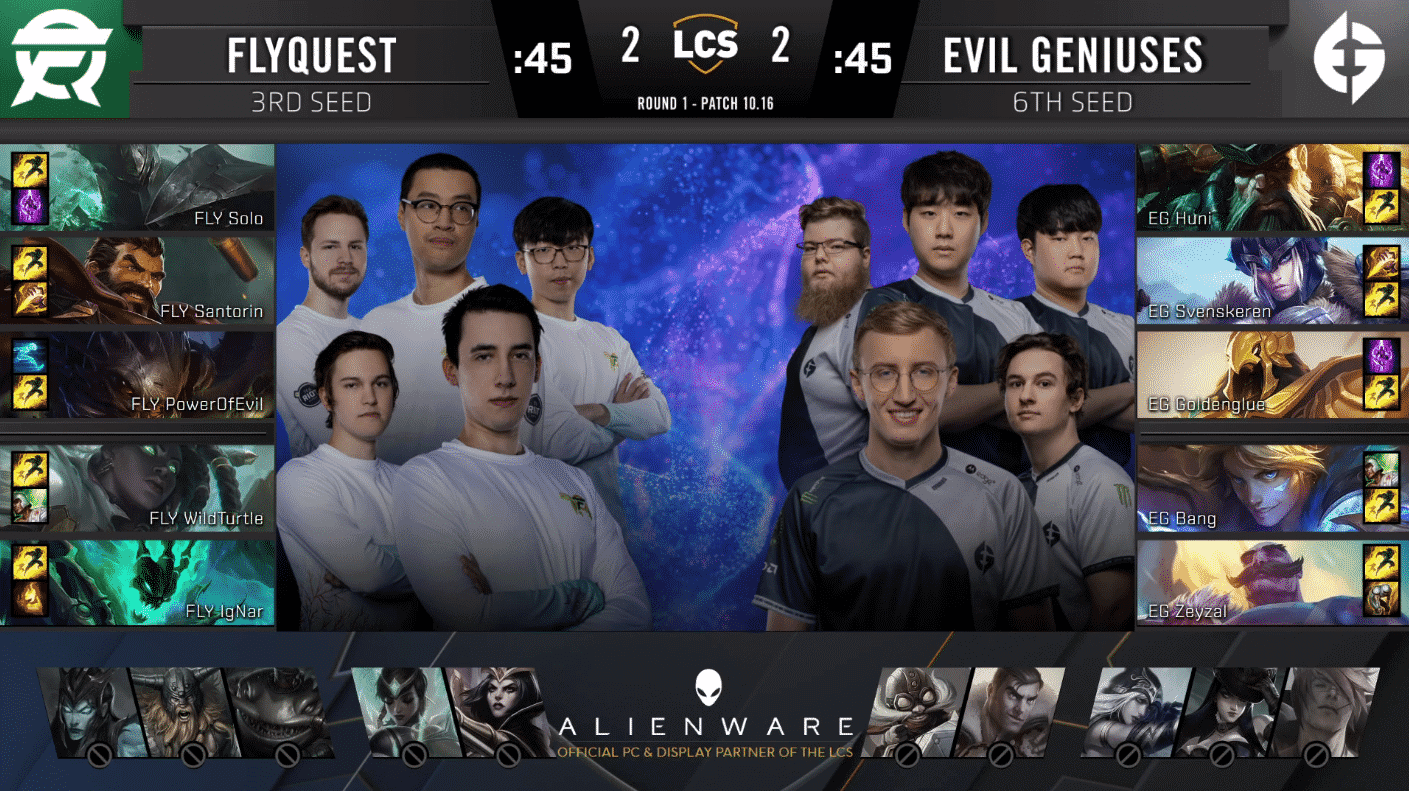 This was the game to decide the entire series. Its also where FlyQuest returned to their form from the first two games. They had great early aggressiveness, with IgNar pulling off an excellent gank mid at only five minutes. Here, PowerOfEvil was gifted First Blood again. Santorin continued his rampage, getting a kill for WildTurtle in the bot lane and even killing the enemy top laner, Huni, all by himself. All the while, Santorin accumulated multiple dragons and Heralds to push the lead ever further.

The mid game was still under FLY control, as they brought their dragon count to three, but EG fought back. Goldenglue first solo killed Solo, then EG all made a play on the bottom side of the map to kill two from FLY. But it wasn’t enough. At 25 minutes, EG desperately attempted to take the fourth dragon away from FLY, but Santorin came up clutch and stole it away! With their new damage buff, FLY instantly killed two EG members and turned for Baron, securing it with little issue.

Now it was time for FLY to make their finishing move. They sent Solo mid to push there while the main four-man unit went bottom. EG was pushed to the edge, and faced with little options, tried to kill the singled-out Mordekaiser. Funnily enough, Solo simply brought Goldenglue to the Death Realm for a 1v1, which he convincingly won. Now down a member, EG was powerless to stop FLY from rampaging through their base and crushing their final Nexus to win the series.

Prey: 10 Things To Know When Starting A New Game

Prey: 10 Things To Know When Starting A New Game