The LCS playoffs have reached stage two after an exciting first week of games. Finally, we get to see last split’s champions Cloud9 (“C9”) face off against FlyQuest (“FLY”). FLY is coming hot off of a close series win over Evil Geniuses, while C9 is making their first appearance in the post-season due to their first-round bye. Both of these teams met in the Finals in spring, so with so much on the line, this was definitely a match to look forward to!

Game One was a super exciting one, where FLY absolutely smashed C9 from minute one. At the very start of the game, FLY invaded the C9 jungle and killed Blaber for First Blood plus took his red buff. To rub salt in the wound, FLY invaded again at the blue buff, killing Blaber for a second time, then stealing that buff too. FLY never let up off the gas from here. At 7 minutes, they four-man dove the bot lane tower. Santorin even stole a Rift Herald away from Blaber then got another kill for his time.

All in all, it was a doomed game for C9. When they tried to contest C9 at any objective, FLY simply outfought them with their massive lead. As a result, FLY continued to accumulate kills, dragons, towers and gold. Pretty much the only play C9 pulled off was a three-man dive in the top lane. The squad did get a kill and tower, but unfortunately, it really didn’t matter at this point.

It never seemed like C9 really had a chance, but the point of no return was at 22 minutes. Here, C9 attempted to contest FLY for their Cloud Soul. They pulled the trigger on a team fight but lost it five-for-one. With this huge win, FLY grabbed the Ace, the Soul and a Baron. In the following minutes, FLY demolished multiple towers and an Inhibitor. The final nail in the coffin came at 29 minutes, when C9 desperately made one last engage. Unsurprisingly, it ended in failure. All five members from C9 fell and it took FLY only a matter of seconds to run into their opponent’s base and smash their first Nexus of the series. 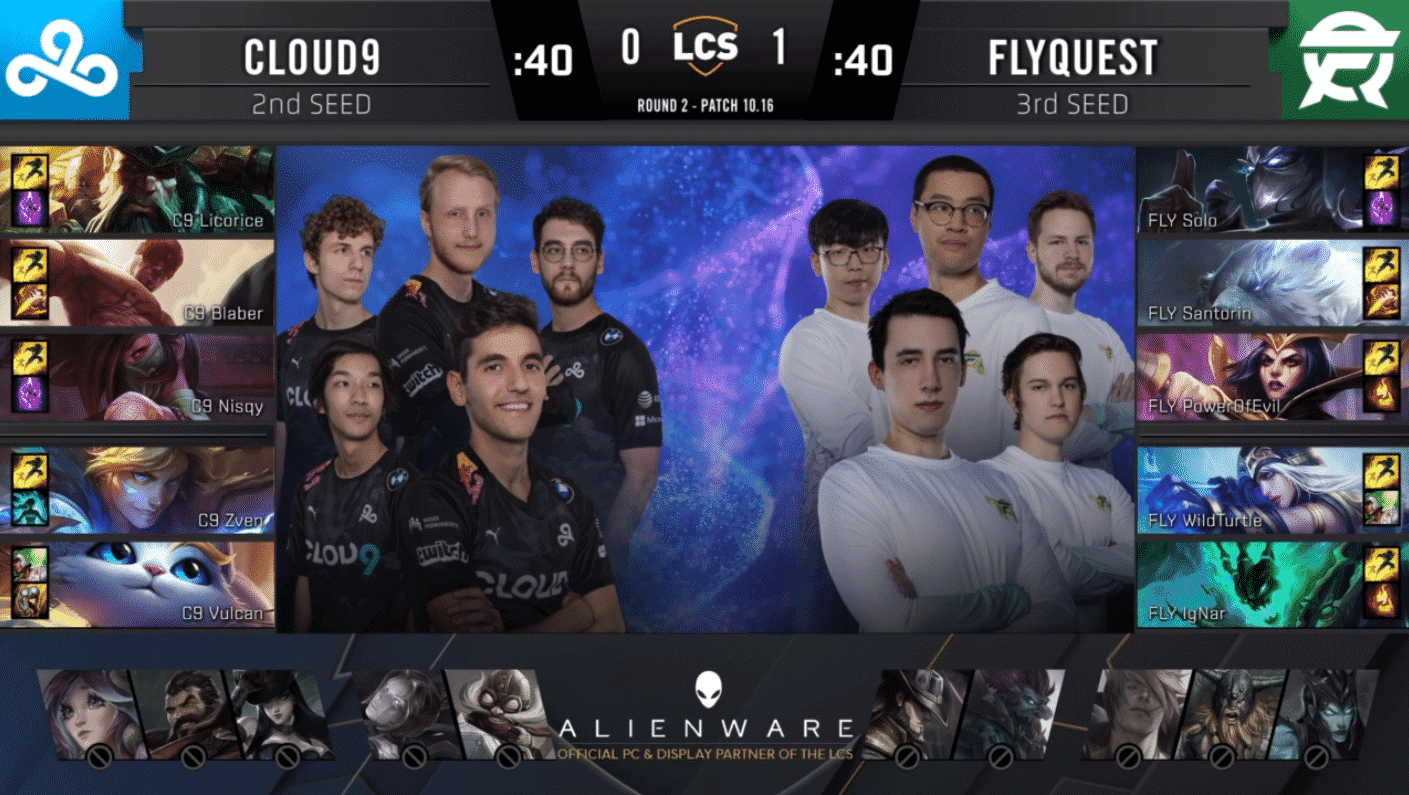 This second match of the series was one of the craziest fans have seen in a while. Santorin made a bizarre misstep at minute three when he tried to gank bottom but walked under the tower and practically donated First Blood to Zven. Fortunately, this wasn’t awful, as C9 gave four kills back for only two of FLY’s own at a six-minute dragon fight. FLY had another team fight win at the Rift Herald, but C9 responded back a minute later with a pick onto IgNar. Overall, it was in FLY’s favor early game, but C9 was still totally in it.

FLY next decided to bully Nisqy, killing him twice in the side lane and taking the First Tower bonus. C9 made a play on the other side of the map, killing Solo and knocking down his tower too. From here, the two teams traded kills and objectives across the map until the insanity began at 23 minutes.

This insanity sprouted from a team fight at dragon, where FLY obliterated C9 four-for-zero. After that, they decided to leave the dragon and secure Baron instead. As such, C9 respawned and rushed the Infernal, taking it as soon as FLY came to contest. In a bizarre turn of events, C9 turned the tables and Ace’d their opponents. Immediately, they ran down bottom lane, taking two towers, an Inhibitor and even a Nexus tower.

But they overstayed and FLY respawned. Blaber died quickly, so FLY tried to chase the four-man C9 squad down. But this time FLY overextended, getting outplayed by the kiting ability of C9. C9 eventually turned and fought, which resulted in four quick kills. Now, C9 was able to easily rush FLY’s base, take their Nexus and tie up the series 1-1. 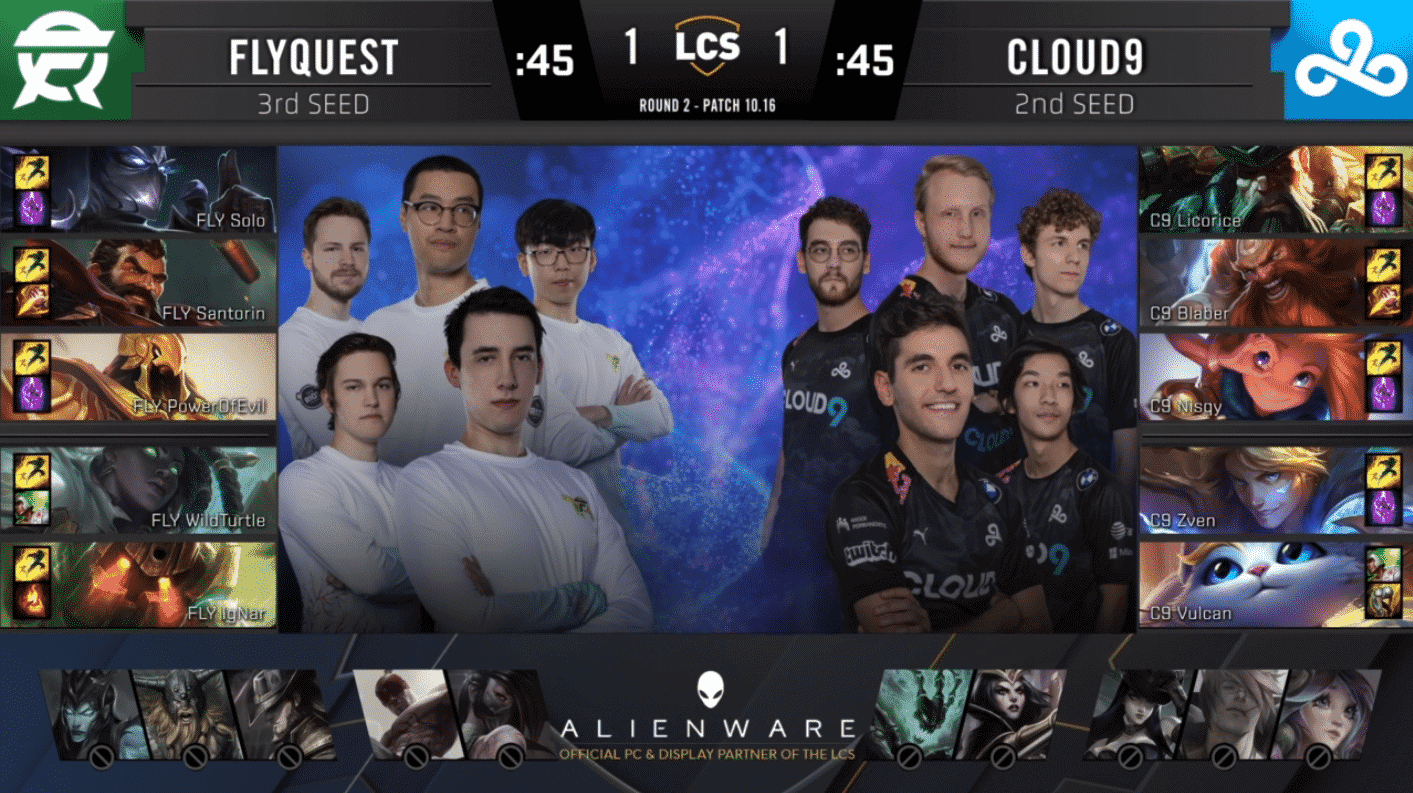 FLY threw Game Two, but they stood firm in Game Three and forced C9 to match point. FLY kicked it off with a level one invade yet again, this time killing Zven who stayed too close during it. Once again, FLY dominated the early game, picking up multiple objectives, including two dragons, a herald, a kill and the First Tower bonus. C9 did pull back the lead with back to back dives onto Solo though, then won a team fight near dragon.

C9 gained a ton of ground off of this play which helped them win another team fight, this time in the bot lane and four-for-one. Licorice also had a big outplay escape from a 2v1, which led to another victorious fight and the first Baron take of the game. Shortly after this, there were two more fights, followed by an extremely long pause. When fans finally got back into the game, they were greeted with a long team fight that C9 pulled ahead in.

As a result, they rushed to Elder, but turned to fight FLY and FLY killed Licorice right off the bat. Because of this, FLY was able to get Elder and Baron on top of their previously acquired Mountain Soul. With this, FLY made quick work of C9’s base. They demolished every tower beside the Nexus Towers and all three Inhibitors. C9 put up a valiant defense, but in the end, this triple Inhib pressure was too much to handle, and FLY eventually finished their Nexus off. 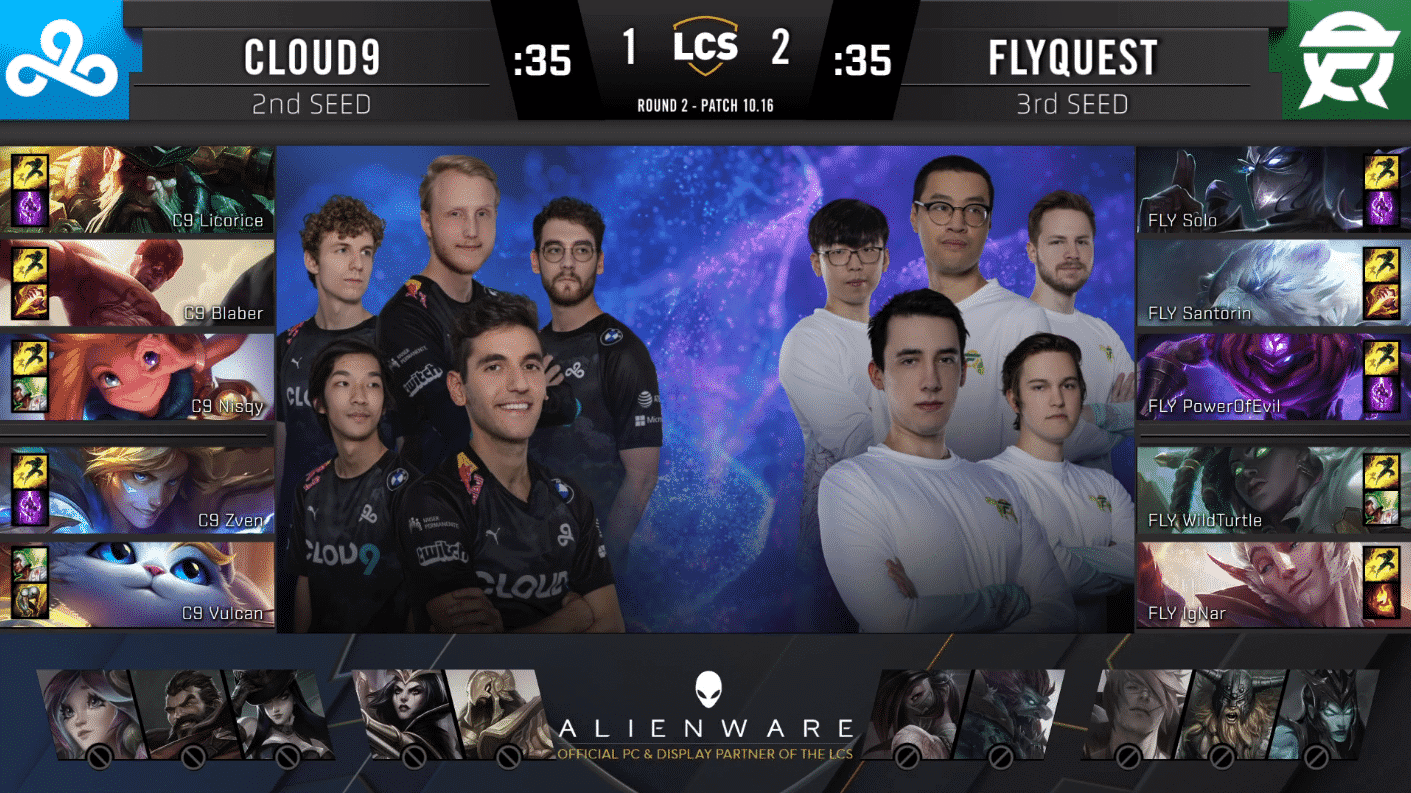 In Game Four, C9 demonstrated that they’re no longer the dominant team from spring with a final loss to FLY. Once again, they drafted a very similar composition and failed to show the necessary adaptation. When in the game, Blaber managed to relentlessly camp top, where he found two kills onto Solo early. In addition, he secured the Rift Herald and used it there to take the First Tower bonus. Meanwhile, the FLY solo laners worked together to kill Nisqy mid, but C9 still carved out a significant lead top regardless.

It looked great for C9 from this point, though it soon turned sour. At 13 minutes, both teams met at the dragon pit, where a team fight inevitably erupted. FLY clawed back the lead with a three-for-one victory here and took a Mountain Dragon. After that, FLY maintained control over the map, slew one more dragon and set themselves up at Soul point. C9 contested FLY at the final Infernal Dragon, and though the fight was long and looked very close, FLY won it and secured themselves the Infernal Soul.

At this point, C9 technically had a slight gold lead but appeared far behind to viewers. They managed to win a messy mid lane team fight two-for-one but it didn’t matter. That’s because FLY smacked C9 down at the Elder Dragon, killing both Blaber and Zven. C9 could only watch now as FLY marched to Baron and picked up the second uber buff. Equipped with these, FLY made short work of C9’s base once more, destroying all three Inhibitors, then pushing the Nexus Towers too. It didn’t take much after this for FLY to simply blow over the Nexus, knock C9 down to the Lower Bracket, and even secure a spot in the World Championship.