Two teams meet for the second time in playoffs in another fateful encounter.

The second round of the LCS playoffs wrapped up today, featuring an important rematch between Team SoloMid (“TSM”) and Golden Guardians (“GG”). After Cloud9 defeated Evil Geniuses yesterday, TSM got the chance to take down the GG squad that defeated them 3-0 in the first round of playoffs. On the other hand, GG had the chance to knock TSM out of playoffs, and ultimately, Worlds contention. Everything was on the line today; here’s how it all went down.

Unlike their first series, game one between GG and TSM was fairly close. However, GG still pulled away with the first win. First Blood came out at only three minutes, when Spica ganked and killed Damonte. Funnily enough, GG collapsed on Spica and after Damonte Teleported in, he got a revenge kill on Spica. But after that, Closer stepped up and put the pedal to the metal. He danged bottom and mid to get kills, while also securing two dragons and a Rift Herald for his team.

Meanwhile, TSM was making moves of their own. Broken Blade, who had a very good individual performance on Vladimir, claimed the First Tower bonus top all by himself, then was instrumental in a three-for-one team fight victory at the Baron pit. Unfortunately for them, though, they had an Infernal Dragon stolen from them and GG set themselves up at Soul point. They did manage to push GG away from the fourth dragon, take that for themselves and buy time.

Then disaster struck for TSM. The squad moved top lane together, but strangely all scattered as GG began to collapse. As a result, Doublelift and Bjergsen were caught out and both died. This gave GG the prime opportunity to slay Baron Nashor. A minute later, both teams met up at the dragon pit. GG narrowly secured their fourth dragon, securing the Infernal Soul, then taking the fight with TSM. GG easily won this two-for-zero, then pushed mid. Finally, the rampaging GG squad knocked down the mid Inhibitor, picked off Doublelift, then promptly ended the game. 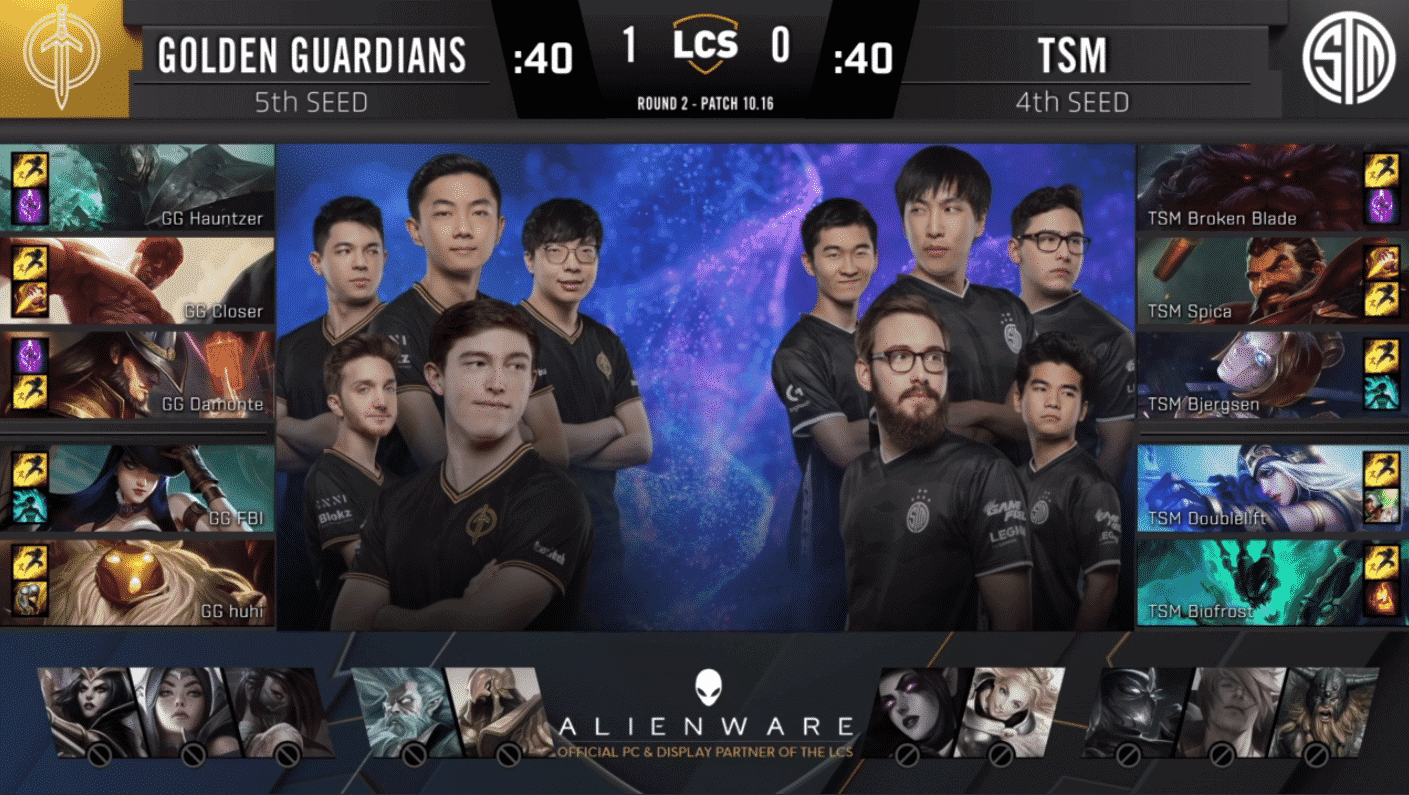 Game two was another incredibly close game that had fans of both sides on the edge of their seats. GG, once again, had a decent early game off the back of Closer. He claimed the first dragon and Herald for his team, then killed Broken Blade for First Blood top. But then TSM turned it on and started fighting and winning. Bjergsen, in particular, was massive, solo killing Hauntzer and helping his team get the First Tower bonus. Throughout the game, he was the biggest carry in fights, no doubt.

During the mid game, TSM was very proactive. The team constantly rotated around the map, accumulating uncontested dragons and towers. In fact, by 23 minutes, TSM had moved to Soul point. At 28 minutes, an interesting trade happened between the two teams. TSM went bot to kill Hauntzer, which they did, but GG rushed Baron and claimed its buff. However, TSM got the Ocean Soul for themselves. As GG didn’t accomplish much with this Baron, TSM looked favored in the coming minutes.

But not even Ocean Soul could save TSM from Huhi’s Bard. First, Huhi shot a huge Tempered Fate at Bjergsen, which led to TSM’s only real carry going on death timer. This led to GG securing not only the freshly spawned Elder Dragon, but the second Baron Nashor too. This momentum swing was massive and GG immediately pushed top and mid with the double uber buffs. The two Inhibitors went down easily, then Huhi’s Bard locked on to his second victim. Doublelift was in his sights, then was caught in the ult and instantly killed afterward. Down their ADC, TSM couldn’t do much to stop GG from taking their second Nexus of the series. 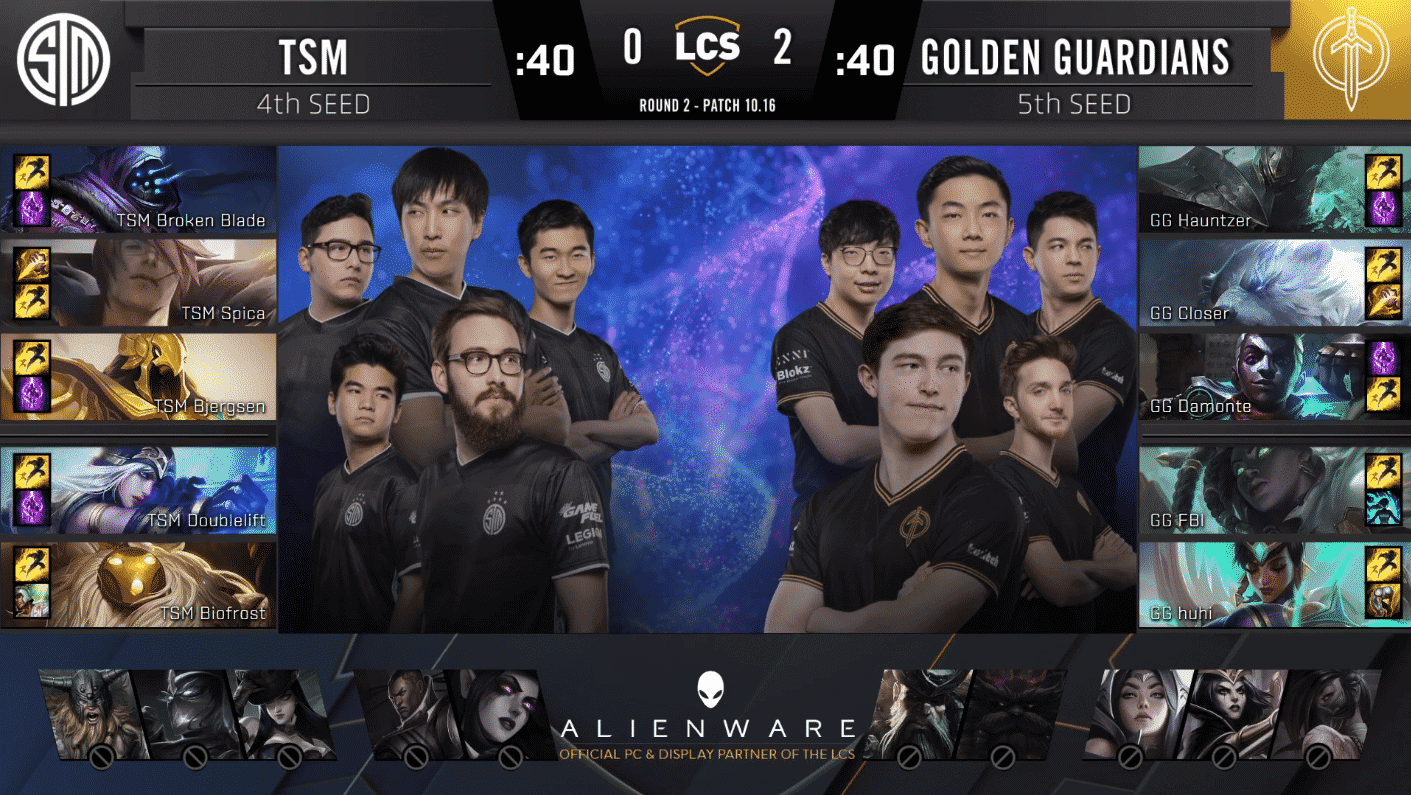 Finally, after losing five straight games to GG in two series, TSM found their footing and picked up a win. In fact, this game was quite dominant from TSM and looked great. Spica started off strong by taking a dragon, the Rift Herald and killing Closer in a bot lane 3v3 for First Blood. Though GG won a couple of fights after this, they weren’t too impactful and TSM kept control of their lead by claiming the First Tower bonus in the bottom lane and winning a 15-minute team fight three-for-zero.

Things continued looking good for TSM. Thye found picks onto Huhi and Damonte in the coming minutes, which helped them grab additional objectives with numbers advantages. It did look a bit hairy at the 21 to 24-minute mark though. Here, GG first found a pick onto Bjergsen, then a two-for-zero team fight win at dragon. After this dragon fight, GG went for Baron, and despite getting the buff, lost four members when TSM collapsed and slaughtered all but FBI’s Senna.

Shortly after this series of plays, TSM slammed another team fight victory in the middle lane, this time three-for-zero. They kept up pressure on GG’s base for the next few minutes, until the second Baron spawned. GG had no chance to get to the pit and TSM easily claimed a Baron buff of their own. A minute later, GG thought that they had found a crucial pick onto Doublelift. They killed the AD Carry, but Bjergsen and Broken Blade on the side lanes were doing work. The two smashed past their respective Inhibitors and rushed the base. A chaotic fight ensued but TSM was able to demolish GG’s Nexus nonetheless. 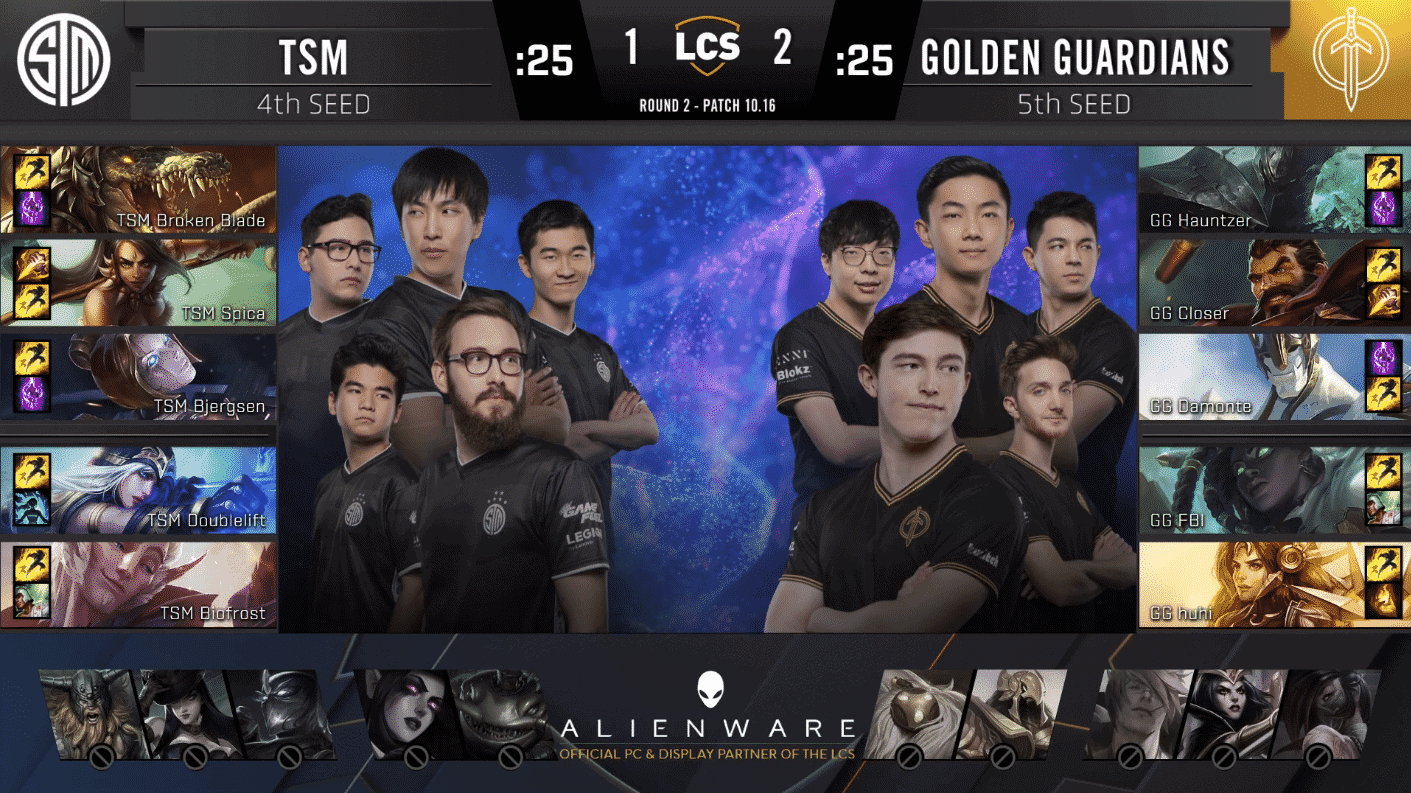 If game three wasn’t enough to convince you it was possible, game four surely did. TSM had another exceptional game and picked up a second win in the series. Bjergsen, as usual, was a huge carry, with Spica having a standout game as well. Spica commanded the jungle, which helped set his team up for a great fight at nine minutes. Here, GG tried to do Herald, but were split apart, making it easy for TSM to get three quick kills. From this, GG did get the Herald, but Closer never even got the chance to use it, so it was worthless.

The game quickly ran away from GG though. Another team fight erupted towards the top side, where Bjergsen found a fantastic flank to kill the GG backline. This led to a clean Ace for TSM. Over the next few minutes, TSM demolished a few towers but GG responded by picking off and killing a couple of TSM members. Overall, TSM was opening up the map at every opportunity and pushing GG further back into their base.

At 20 minutes, things really exploded. An attempted pick in the bot lane turned into a full-blown team fight where TSM mopped the floor with GG. They got another Ace onto GG then went to Baron and slew that. TSM maintained the pressure, picking off Hauntzer then immediately pushed the bot lane. Two towers and the Inhibitor fell quickly, and as TSM was so far ahead, they stayed and pushed for more. GG tried to chase them out, but TSM swiftly turned it around and got yet another Ace. With this, TSM easily ran into GG’s base and smashed their Nexus. 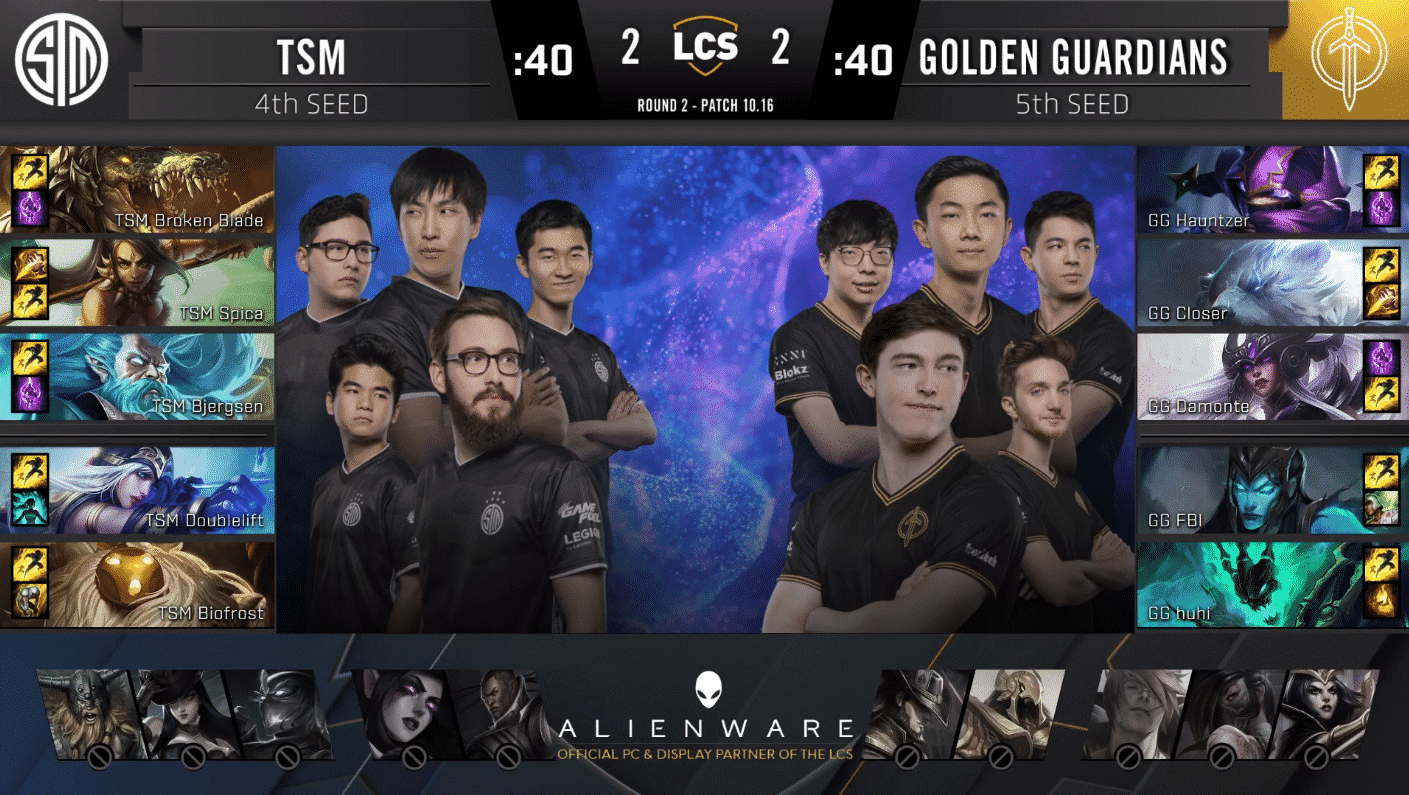 Many expected this to be a simple rehash of their first series, but this one delivered so much more. This game was absolutely wild, swinging back and forth between the two teams constantly. Closer kicked it off with a crazy tower dive, where he helped his bot lane get First Blood then miraculously survived on single-digit HP. GG’s bottom lane got quite ahead through plays focused there, but TSM’s top and jungle did the same. All in all, it was a fairly even game moving into the mid game.

Though it was even, GG had one distinct advantage: dragons. By minute 16 they already had three dragons, which set up for a big fight later. It came at 21 minutes. GG got a pick beforehand, then Biofrost made a disastrous mistake. As soon as Spica jumped into the pit, Biofrost Bard ulted the dragon, giving Spica no chance to kill it and leaving him to die. As a result, GG acquired Infernal Soul.

It wasn’t over though. The game stalled out for a few minutes as the weight of it felt heavy on the players. Finally, at 29 minutes, the team met for Elder. Here, Doublelift came up huge, absolutely eviscerating GG and helping his team get an Ace. Afterward, TSM got an Inhibitor Tower, the Elder Dragon and went to the Baron. But once again, fans were put on the edge of their seat when Damonte stole the Baron!

Once more, the game was at an even state. And it all came down to a single team fight. At 34 minutes, Broken Blade Teleported behind GG and initiated a team fight. The battle was extremely close at first, but TSM ended up killing two, one of which was FBI who desperately Flashed in to try and make a hero play. Unfortunately, it backfired, and with two GG members down, it was simple work for TSM to clean house, destroy GG’s final Nexus of the year and complete the reverse sweep.