It is the battle between the fourth-seeded 100 Thieves and the fifth-seededDiginitas in the Losers Bracket of the LC Mid-Season Showdown. Who came out on top?

Night two of the LCS this weekend saw 100 Thieves take on Dignitas in the losers bracket of the Mid-Season Showdown. This was tipped to be an even contest with both sides having obvious strengths and weaknesses.

Game One’s in a best-of-five often start out the slowest. For the first five minutes of the game, the laners were just testing the waters and seeing what they could get away with. Huhi found out the hard way what he couldn’t when he tried to freeze the lane for FBI, who was on his way back from base. Aphromoo and Neo comboed well with Thresh and Kalista to secure First Blood.  DIG took a monstrous lead at 13:15 when a fight broke out and saw them take a 4-0 fight, putting them firmly in the lead.

As the 15-minute mark approached, Dignitas was up in gold and up in dragons at 2-0. The game started to turn on its head around the next dragon fight at 19:35, as Dignitas secured their third dragon of the game but lost multiple members for it. 100 Thieves did not take their foot off the gas from then on. Multiple fights broke out with Ssumday’s Gnar reigning supreme every time. At 33:00 Dardoch attempted to steal the Baron away from 100T but failed, so DIG lost four members. With this, 100 Thieves eventually pushed through for the win. 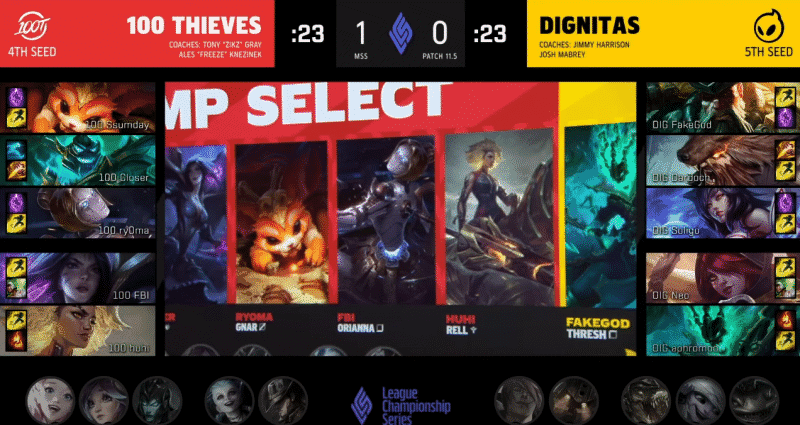 The game started out with 100 Thieves receiving a taste of their own medicine. Dignitas brought in Soligo with his Teleport to cleanly three-man dive Ssumday for First Blood. 100 Thieves showed signs of improvement from the last game, getting an important kill at 8:39 onto Dardoch to give 100 Thieves a free Rift Herald. The game started to go firmly in 100 Thieves’ favor by the time it hit the 14-minute mark. The Thieves were 2k up on Dignitas, with the only saving grace for DIG being that the dragons were equal at 1-1.

The next few minutes saw 100 Thieves get a couple of picks onto Dignitas to further strengthen their grip on this game. Dignitas showed signs of life at 25:50 when they were able to secure a 2-2 trade, giving them some breathing room for their carries to collect gold with the map resetting. 100 Thieves cemented their stance with an impressive three-for-one team fight which saw them pick up the Infernal Soul. At 33:51, 100T was able to secure the Baron and pushed for the end, taking down the Nexus at 36:02. 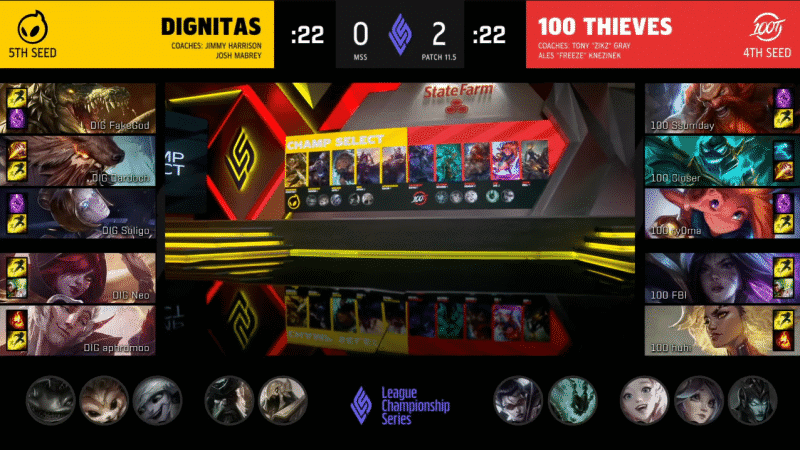 This is where the wheels came off for Dignitas as they completely went full tilt on this one. It was a disaster early on for Dignitas as 100 Thieves were able to pick two members of DIG at 3:17, one of those players being Dardoch. History repeated itself two minutes later, at 5:56, when 100T again killed Dardoch. The game was all but over at this point and this is when the tilt took over.

By the time the game hit the 15-minute mark, 100T were already up 5k gold and had a 7-1 lead in kills. DIG made a last-ditch effort at 21:28 when a one-shot Aphromoo tried to engage onto 100T. This was turned around completely by 100T, securing the Baron in the process. The game stagnated for five minutes before 100T found the game-winning fight and closed out for a clean 3-0 sweep.

Stages of a gamer

Stages of a gamer