TSM and FlyQuest battled for the LCS throne tonight.

The 2020 LCS Summer Split wrapped up tonight with an anticipated match between FlyQuest (“FLY”) and Team SoloMid (“TSM”). These two teams weren’t expected to be here but defied the supposed odds and conquered all their competition to claim their spot here. FLY made Finals last split, and after working through TL and the Upper Bracket this split, made it straight to this split’s Final. TSM’s path through the Lower Bracket was hard too. They had to defeat both Cloud9 and Team Liquid the past two weekends, but the payoff was huge. Now they’re posed to retake the top spot in LCS, though FLY is eager to do the same. It all came down to this, so here’s how the series unfolded.

High off their victory yesterday, TSM came out to an early series lead in Game One. In fact, they absolutely dominated this game. They started off by taking the first dragon and the Rift Herald. Though Santorin did get First Blood onto Broken Blade, TSM used the Herald bot to get plates and pressure for a Mountain Dragon. The squad maintained bottom side pressure by bringing Spica and Bjergsen to dive FLY’s bot duo, killing WildTurtle. This led to the First Tower bonus going their way too.

FLY did secure the second Baron, which they used mid to try and get pressure for the third dragon. They did manage to pull of a one-for-one fight, which wasn’t too bad, but TSM got the third dragon and set themselves at Soul point. Then, at 23 minutes, FLY had to contest for that final dragon. A team fight erupted where TSM slaughtered four of FLY’s champions. With this opening, TSM took not only the Soul but also Baron Nashor.

Within the next few minutes, TSM cleaned up all of the towers outside of FLY’s base. At this point, FLY’s backs were against the wall. They needed to get vision, but when they tried, TSM found picks onto both Solo and IgNar. After this second one, TSM went to Elder. FLY was forced to contest it but lost four members in the process, along with the Elder buff, and soon after, the Baron buff too. Equipped with both buffs, TSM made short work of all three FLY Inhibitors then finished them off with one clean Ace in their base. 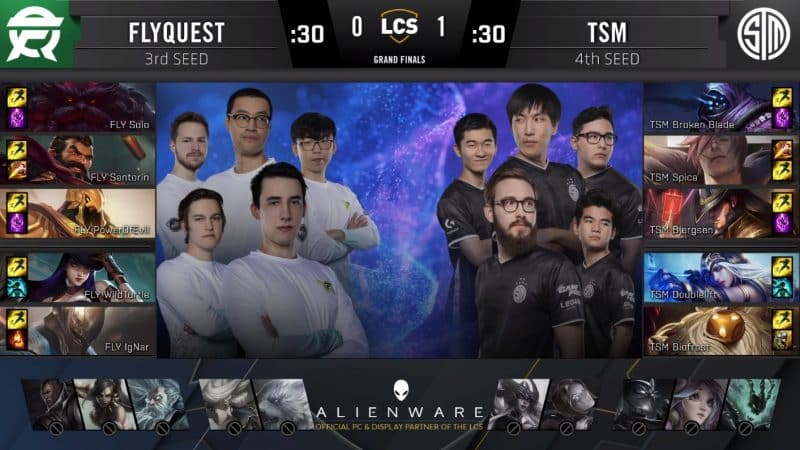 The series came to a quick match point with another victory for TSM in Game Two. First Blood came out at seven minutes when TSM sent four members top to help Broken Blade kill Solo. Although FLY did make early plays by taking a dragon and a Herald, along with a kill, TSM soon took the definitive lead. At 12 minutes they started off a fight around the bottom lane, where TSM killed three and secured an Ocean Dragon.

Things went from bad to worse for FLY after that. The TSM bot lane duo dove and killed WildTurtle under his tower, while the other TSM members rotated top to kill Solo. TSM kept ramping up the pressure by taking the First Tower bonus and another team fight at 18 minutes. Here, TSM killed three then chased down and killed the last remaining two. During the next few minutes, TSM grew their gold lead a bit more, then rushed and secured the first Baron at 27 minutes.

This Baron allowed TSM to knock down the remaining towers outside of FLY’s base. They didn’t damage any Inhibitors though. As a result, TSM had to wait for another. At 33 minutes, TSM did pick up this buff when FLY sent four bottom to kill the split pushing menace of Broken Blade’s Jax. FLY, who to their credit, did manage to amass some dragons and secured Infernal Soul for themselves at 34 minutes. It didn’t matter that much, unfortunately, as the second Baron let them take multiple Inhibitors. Afterward, TSM was able to get Elder Dragon and a third Baron, which proved too much for FLY to deal with and they lost their second Nexus. 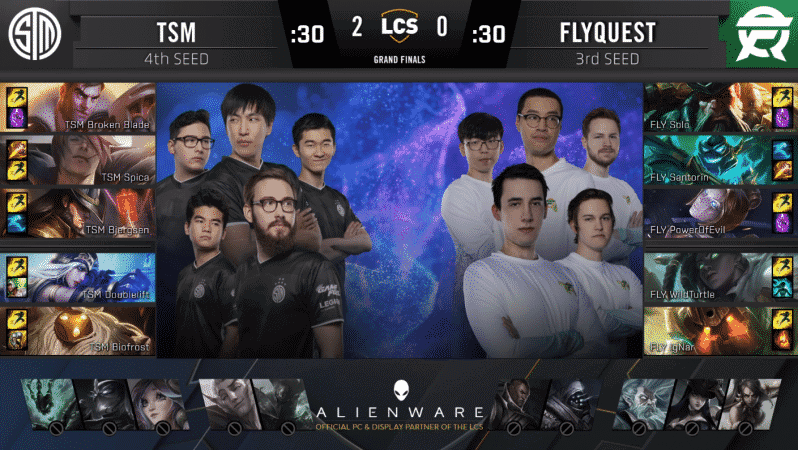 FLY bounced back in Game Three to keep their series hopes alive. Even so, it was an incredibly close game. IgNar was the recipient of First Blood after Spica tried to gank him but overstepped under tower. FLY also picked off Biofrost which led to them taking the First Dragon. Like in the games before though, Bjergsen went top to help Broken Blade kill Solo and start to create a lead in the top lane. In addition, TSM used a previously slain Rift Herald to claim the First Tower bonus top.

TSM decided to kill Solo in the side lane again to kill him. After that, both teams traded a tower to each other and FLY went up another dragon. At 25 minutes, chaos ensued as FLY moved to catch out Doublelift, while TSM did the same on PowerOfEvil. Both teams lost these members then met for a team fight mid, where TSM won two-for-zero. TSM seemed to gain full control a couple of minutes later when they dove bot to kill Solo once more, then engaged a team fight to get the full Ace.

However, that wasn’t the case. With Santorin’s Hecarim, FLY picked off Doublelift when he was alone. They got the kill but it led to map pressure and another Cloud Dragon, their third of the game. At 36 minutes, another team fight broke out. It was super close, but in the end, FLY won with four-to-three kills. Now FLY had the lead and that allowed them to take a free Baron, a kill and Cloud Soul a few minutes later. Finally, FLY had the tools they needed, so they pushed down mid together. TSM couldn’t mount a defense with their split push focused composition and ended up losing their first Nexus of the series. 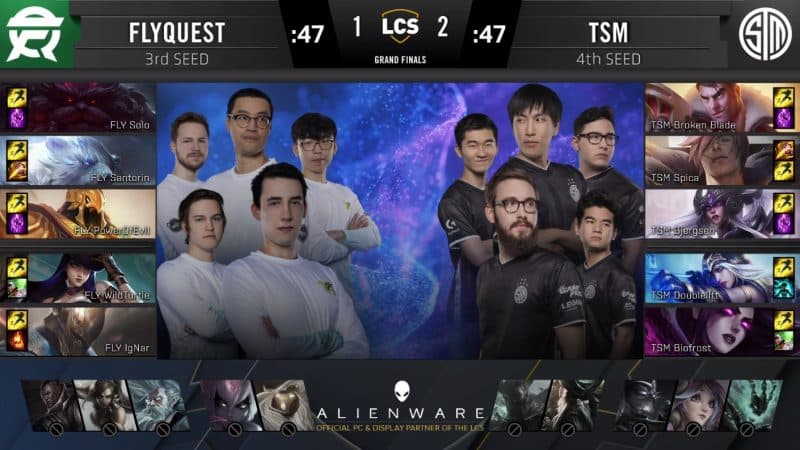 Game Four was another even game and delivered a tense back and forth. Spica made the first move this time, ganking top to kill Broken Blade for First Blood. On the other side of the map, FLY claimed the first dragon. TSM kept the advantage though by slaying the Rift Herald then using it top for First Tower. It stayed even though, as FLY accumulated two more dragons to set themselves up at Soul point at 17 minutes, but they had to sacrifice three kills for it.

The power of FLY’s team fighting composition came online during the mid game. They first won a team fight at Herald one-for-zero, then moved to dragon at 24 minutes. Unfortunately for them, Spica stole their Infernal Soul away, but FLY did get four kills for it. A minute later, FLY was on the Baron, rushing it and securing it. A team fight ensued where FLY, once again won, this time three-for-zero in kills. The Baron only resulted in two towers, and again, Spica stole dragon to stall the Baron but got a few kills.

After getting two kills at that dragon fight, FLY also picked off Doublelift. TSM’s middle Inhibitor fell immediately. At 34 minutes, FLY finally got their Infernal Soul and got a kill when TSM tried to contest, making it easy to get the Baron to boot. From here, FLY converged on the bottom lane to win a fight two-for-one, leading to TSM’s bot and middle Inhibitors falling. The final nail in the coffin was hammered in at 38 minutes, when FLY caught out Doublelift for a second time, killing him instantly. Down their ADC, TSM was helpless as FLY stomped through their base and brought the series to 2-2.

Cue up the Silver Scrapes. 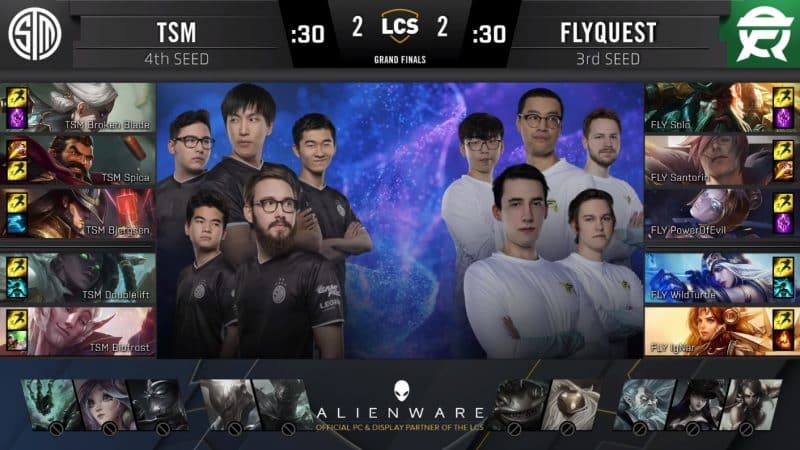 Game Five was another great game to wrap up the LCS. FLY was ready to go from the start, as Santorin and PowerOfEvil rotated bottom at minute three to dive TSM’s bot duo. They nearly traded kills over, but FLY got two kills and escaped with everyone alive. TSM hit back though. Bjergsen roamed top to dive Solo and he ended up getting Broken Blade a kill on him. This roamed paid off huge, as Broken Blade solo killed Solo at eight minutes. Meanwhile, FLY won a skirmish one-for-zero bot and claimed a second dragon.

TSM continued to smash the top lane, diving Solo to kill him, then using Herald to take the First Tower bonus. Shortly after, TSM went bot to will WildTurtle and take another tower. From here, TSM went on a rampage, killing PowerOfEvil, multiple towers and stealing a Cloud Dragon from FLY. Between 19 and 24 minutes, TSM got three picks altogether, which set themselves up nicely to take a team fight at 26 minutes. At this point, TSM killed four FLY members and only lost one, meaning they could take the Baron too.

FLY’s base crumbled from TSM’s Baron siege. The top Inhibitor dropped, then mid. FLY did manage to momentarily stop TSM from pushing any farther by picking off Broken Blade. Bjergsen, the team’s biggest carry, got payback for his top laner by solo killing Solo a minute later. TSM had the momentum and they knew it. The squad pushed onward, finishing off the last Inhibitor before eyeing the Nexus Towers. The final team fight erupted and TSM slaughtered four FLY champions. Finally, after years, TSM won a split final and claimed the title of best team in North America.

Pop Fiction: Season 4: Episode 40: Jak II: Glitch World *GIVEAWAY ALERT!* The Division and Far Cry 3 are FREE TO CLAIM only for 1 more day…here are the details for the same!