Everything you need to know about Gwen, the Hallowed Seamstress.

Gwen is, as of writing, League of Legends’ newest champion and boasts a very exciting playstyle with a unique aesthetic that many adore. Joining the fray soon after Viego, she helps build upon the ever-growing lore of the Shadow Isles. In addition, despite being primarily designed for the top lane, Gwen has viability in the jungle and mid lane too, making her a triple-threat of sorts. She might be cute, but her scissors leave serious marks and she is a champion rising in popularity, so knowing all about her is important for playing as her and against her alike.

Gwen’s story is one of tragedy but one of hope too. Despite having a human body in the game, she was originally a doll, crafted by a humble seamstress Isolde. The very same that would marry Viego, the Ruined King. Isolde loved the doll Gwen and Gwen loved her back. They play-dueled under a kitchen table with silverware and it seems they lived a nice, peaceful life in a small village. But that didn’t last forever. One night, darkness enveloped Gwen, and though she didn’t know why, the name and face of a man distressed her when she thought about it.

Then, she laid dormant for years, upon years, upon years. Eventually, she awoke and was miraculously in the body of a real girl. Her first moments were filled with glee as she took in the delights of having a real body. At this point, something called to her and she stumbled upon ruins that were abandoned for centuries. Here, she found a set of seamstress’ tools, the ones of her former creator.

The magical tools invited her but drew the attention of the vile black mists and shadowy creatures of the Shadow Isles. With her back against the wall, she fought back against the mists. During the fight, she remembered the name of the face that haunted her: Viego. For a moment, she was brought to her knees but the mere thought of him, but the spirit of her creator embraced her through the tools, and with the warming comfort of Isolde, Gwen fought the black mists off.

The gift of life is precious to Gwen and she intends to use it only for good. Her main goal is to fight against Viego and the Shadow Isle monstrosities while traveling Runeterra to bring joy and hope to victims of suffering. 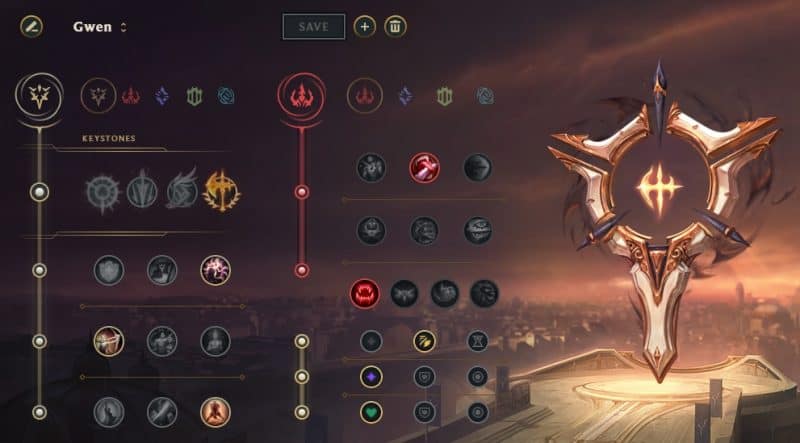 Gwen, as a bruiser-ish top laner, thrives in long fights and has a lot of healing in her kit. Because of this, her best rune is without a doubt Conqueror. As a melee champion, she stacks it up quickly and she utilizes both the extra damage and healing quite well. The rest of the Precision tree augments different parts of her kit but helps her to generally do more damage. And, with Presence of Mind, she can maintain a decent amount of mana since she doesn’t build any.

Now, there are options for the secondary rune tree, but Domination is typically the best. Taste of Blood is great for lane sustain, while Ravenous Hunter scales up well and increases her healing in the late game. Considering her high damage, in-kit healing and item build, the extra healing goes even further. However, the Resolve tree can be taken for a safer early game versus difficult matchups. 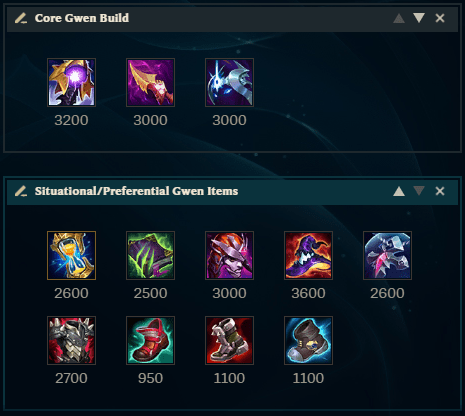 Gwen is an oddity among top lane bruisers, as unlike many others, she’s AP-based. Her core item build isn’t all that flexible but powerful nonetheless. Almost always, Riftmaker is the Mythic of choice and first buy. It has Health, AP and Omnivamp stats she loves, with the great increased-damage passive that makes her even more deadly in extended fights. After that, Cosmic Drive and Nashor’s Tooth are ideal, though their buy order is interchangeable.

From here, all of her item choices are situational, including the boots. Zhonya’s Banshee’s and Thornmail have their places as defensive options. On the other hand, Demonic Embrace and Void Staff help Gwen cut tanks down to size and Rabadon’s Deathcap is great for snowballing and doing as much damage as possible. Finally, Morellonomic is effective for cutting healing in matchups where that’s a priority, as long as Bramble Vest/Thornmail isn’t purchased. 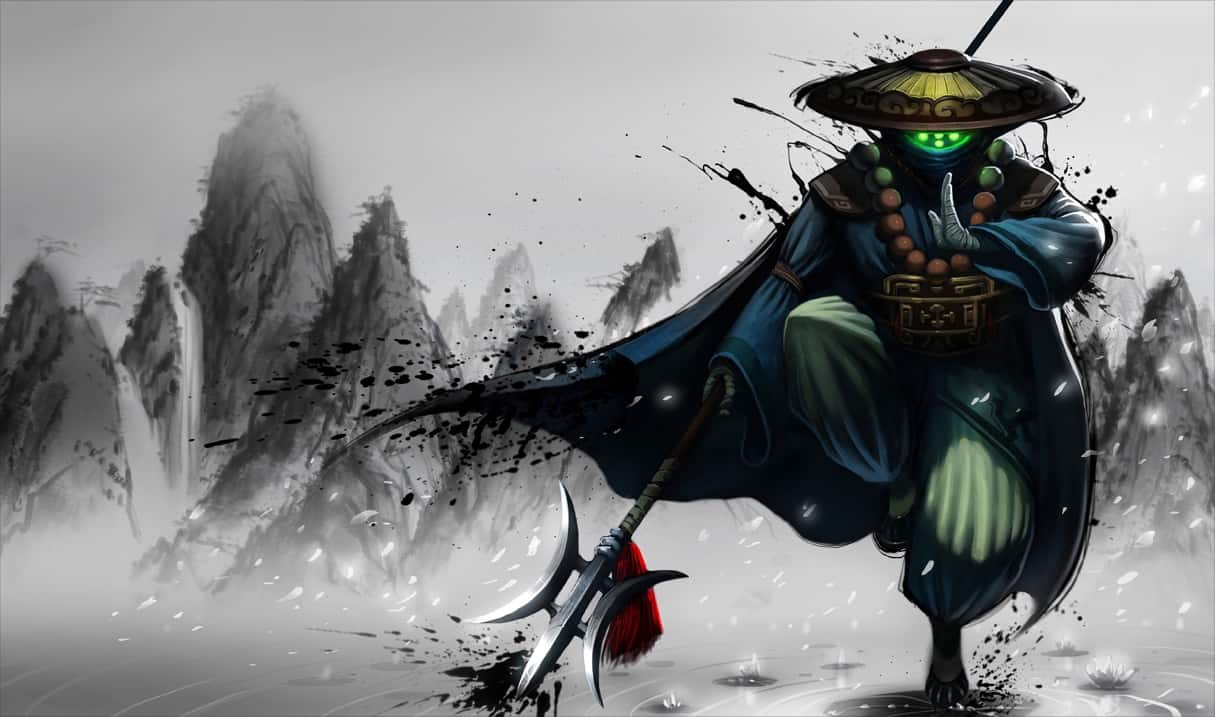 Though Gwen is a relatively strong champion, she has certain weaknesses in her kit that open her up to a decent amount of hard counters. In her main role, top lane, some cheese picks like Heimerdinger and Singed have the highest win rates against her. But better overall picks that still do fantastically into her are Jax, Kayle, Riven and Akali. Besides Kayle, who simply outscales her, the other three has some things in common. First, they all can jump or dash onto her and practically negate her Hallowed Mist (W). They also tend to build healing themselves, so they can last in the long fights, or like in Akali’s case, blow Gwen up instantly so she can’t even heal. Other viable top lane counters are Kennen, Pantheon, Garen and Fiora.

Though she is played much less in jungle and mid lane, having counters ready in these roles should be valuable just in case. In the jungle, assassin picks like Evelynn, Kha’zix, Elise and Rek’sai perform incredibly well into her.

Then, in the mid lane, a lot of champions actually give her a very hard time. Annie, in particular, does the best, but Ahri, Malzahar, LeBlanc, Lissandra, Orianna and Yasuo all tend to prove overly-troublesome for Gwen mid. Truthfully, Gwen players, especially the newer ones, should stick to top lane, as her matchups are generally much, much better there. 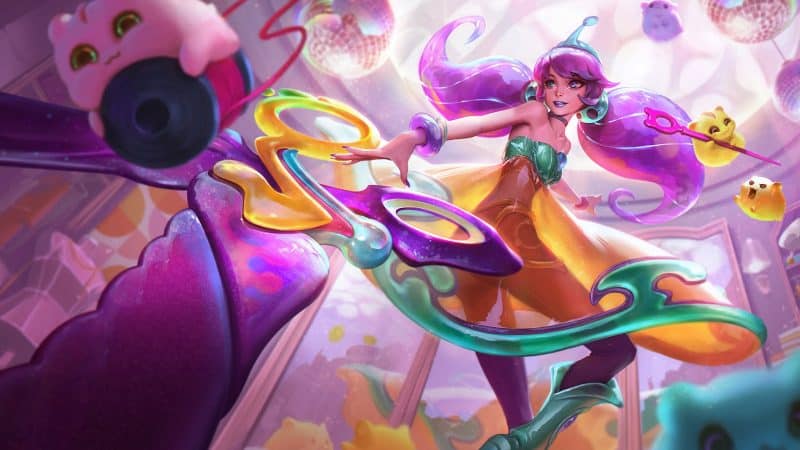 Being such a new champion, Gwen sadly only has one skin right now. Shown above, it’s called Space Groove Gwen, and definitely has a different aesthetic to the base version. So if you’re more a fan of the pink, bubbly Gwen, as opposed to the more ghostly base skin, this is right for you!

But if this doesn’t suit your fancy, expect more skins in the not-so-distant future. Gwen is pretty unique in terms of character design, and if she maintains a decent level of play, Riot will certainly give her some love.