The Logitech G Pro X gaming keyboard has been created specifically with pro gamers in mind. Designed with input from gleaned by its many fingers in the professional gaming pie this compact board is all about serious gaming performance and nothing else. Forget the numpad – a true pro would just hacksaw off that part of a keyboard if you didn’t give them a TKL – and screw dedicated media controls, because where we’re going we just care about the virtual kills.

The Pro X gaming keyboard also represents another departure from the mechanical switch roots it’s laid down in recent times. First we had the Logitech G915 Lightspeed and now the Pro X, both ditching the old Logi-designed Romer-G switches for some very Cherry-looking options.

If that’s what the pros want, then that’s what Logitech is going to give them, but does that necessarily make it one of the best gaming keyboards around? While the Pro X gaming keyboard hasn’t necessarily had me cleaning up in a Battlefields, it has made my repeated deaths at the hands of sharp-shooting 12yr-olds still feel like a pleasing gaming experience.

The Logitech G Pro X is a tenkeyless (TKL) design, and that’s being touted as a pro move because of the fact that, for the majority of us if not the sinister left-handers, that means our mouse hand and our WSAD hand aren’t set too far apart. Hence one of the reasons Razer goes for the Tournament Ed. moniker on its compact designs.

Personally, I love a dedicated volume control, having a simple scrolling wheel to make the eternal din louder or quieter is super-useful to me. But then I spend most of my time just working at my PC, so being able to adjust volume on the fly so as to drown out Jacob’s latest rant about PSU specifications is almost vital to my continued happiness. If you spend 90% of your time gaming, and potentially with a good gaming headset strapped to your bonce to boot, then I’d wager that’s not so important.

What is important, however, is making sure the Windows key doesn’t suddenly flip you back into the desktop at an inopportune moment mid-game by providing a big round ‘game mode’ button on the top right of the board. And because nothing says ‘gaming!’ like RGB LEDs, right next to that is a dedicated light switch.

There are media keys buried under the latter F-keys as secondary functions, but media don’t matter for gaming, right? I mean, who’s listening to Spotify while they’re doing the Counter Strikes? And who cares about repetitive strain injury too? Professional gamers will retire way before they come close to RSI, so Logitech has opted not to include any form of wrist rest for the Pro X.

But what exactly does that ‘X’ stand for? It stands for eXtraction. There is already a very similar-looking Logitech G Pro keyboard, but that uses the ol’ squishy Romer-G switches. The Pro X, however, uses Kailh co-designed GX Blue Clicky mechanical switches, at least in our version of the board. And they’re swappable. 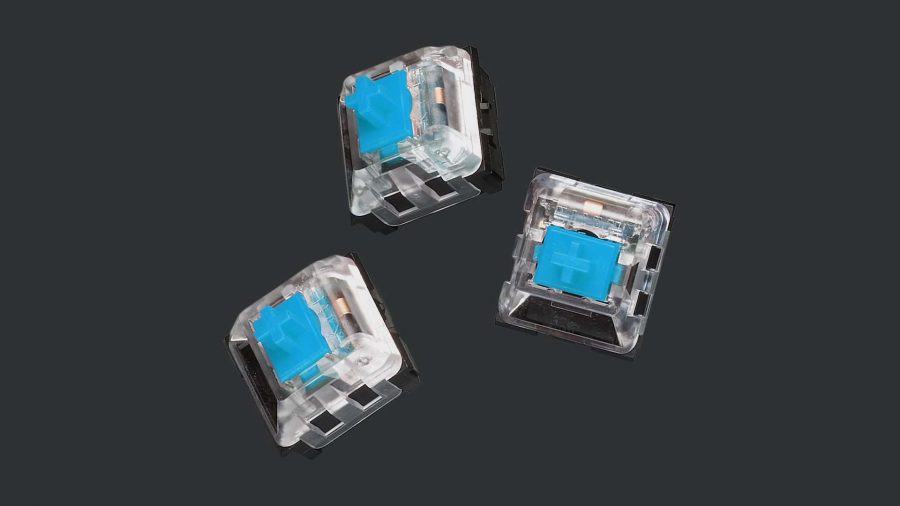 You can also buy the Logitech G Pro X with the GX Red Linear or GX Brown Tactile switches, but as every switch on the board can be replaced you can also buy any of the three GX switches as a replacement kit for the princely sum of $50. Or… er… just under half the price of the keyboard itself. Each kit comes with 92 switches, one for each key and a couple left over.

That means you can mix and match like a true pro. Dropping linear switches under the WSAD keys and keeping the rest clicky AF. But not tactile, those things feel like typing in sand… come at me brown switch lovers.

Or, you could probably not go with any of the GX switches at all. Being plate-based Kailh switches I’m confident you could simply buy any other Kailh plate-based switch and drop it in – and there are a lot more than just Red, Blue, and Brown to choose from. Though I’ve not actually tried it yet; there is a chance Logitech has nixed that option and made its plate connection somehow proprietary. 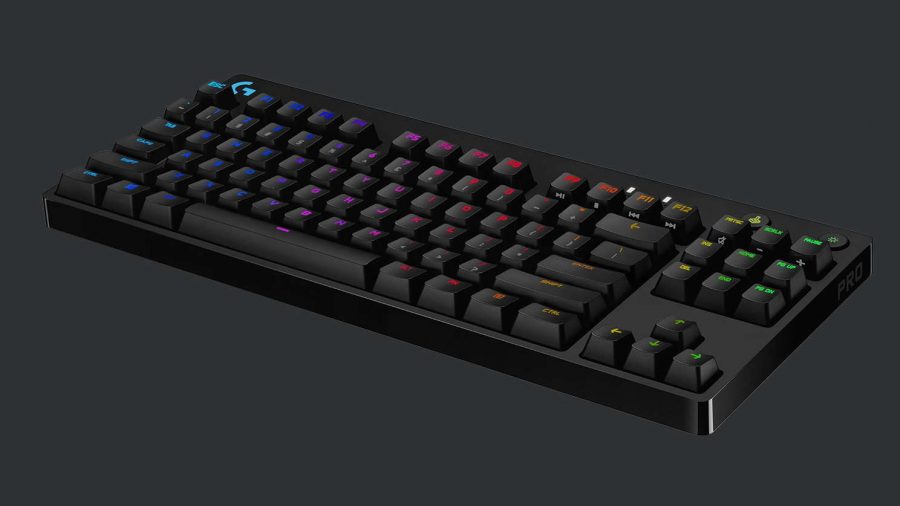 But the GX Blue switches are good enough for most of us. They have a slightly shallower actuation point compared with the Cherry MX equivalent, and a shorter total travel too. That should make them just a little speedier in the gaming department, though they’re not in the same ballpark as a dedicated speed switch. They feel pleasingly solid though, and never less than deadly accurate too.

So if you want a compact, pro-focused gaming keyboard then the Logitech G Pro X is quite literally built for you. So long as you have the money that is, because it doesn’t come cheap.

The simple, pared-back design, the fact it’s deliberately lacking in extras, and the fact you don’t get any spare GX switches as standard makes the $130 – $150 pricing seem just a little too much for my tastes. Professional gamers are paid the big bucks though, eh? So they probably told Logitech they’d be up for paying more if the company stripped away all the other little extras.

A quality compact gaming keyboard, with its pro-leanings learned from professional gamers. But it’s a lot of cash for a stripped-down board, however many times you want to swap out your switches.

Plague Inc. pulled from the App Store in China for “illegal content”