Second-seeded TSM faced off against 100 Thieves to determine who will face Team Liquid the Lower Bracket Finals.

With the stakes getting higher, we saw TSM trying to take down 100 Thieves. The winner of this game will advance to the Finals weekend and will take on Team Liquid. Before the game, many fans and analysts believed that TSM should comfortably be able to grab the win against 100 Thieves. But the Thieves wanted to put up a fight and show the world what they’re truly made of.

The game started with a couple of skirmishes around the map, with not much going either way. 100 Thieves did find themselves with an early advantage when they got First Blood by punishing Spica on an invade. They are then able to pick up the first Herald of the series. With the early aggression and lane advantage, 100T was also able to pick up the first dragon of the game. After all of this,100 Thieves did their best to neutralize Huni and began punishing the Gnar pick.

But after a strong early game, 100 Thieves started slumping. They suffered two consecutive team fights losses, resulting in TSM picking up an Infernal dragon and a Baron both. At 25 minutes, TSM found themselves 3k gold up. At this point, the game became very scrappy, so 100 Thieves were able to make something out of nothing by cleverly picking off structures on the side lanes. After some other scrappy flights, however, TSM was able to get a pick and get their second Baron of the game. 100 Thieves tried to send two of their players to split push against Huni, but 100 Thieves didn’t account for PowerofEvil coming back and getting a Double Kill before Teleporting back with the rest of his team to end the game. With this, TSM took the early 1-0 lead. 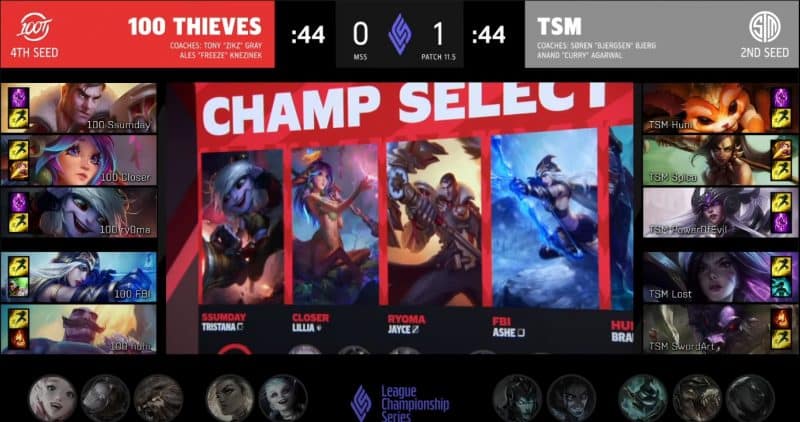 After the Game One loss, 100 Thieves decided to take blue side and try to change things up for the series. Aside from changing things in draft, 100 Thieves went for an early invade, which resulted in Closer being significantly ahead of Spica. From this, Closer is able to get three early flashes from TSM. It’s important to note that things seemed significantly more difficult this game for TSM. 100 Thieves was able to get the first dragon around the eight-minute mark. On the other hand, due to the large advantage that 100T was able to get from the jungle, Closer picked up an early herald for the second game in a row.

A fight for the second dragon resulted in TSM losing the Ocean Dragon but getting two kills. 100 Thieves was still able to maintain a gold lead though. The next major fight in the game was for the next dragon. Here, Closer was able to get the dragon again, but TSM got the two-for-one kill trade. Afterward, TSM was able to sniff out a 100T play in the top lane that resulted in a turn, then two kills and a Baron for them.

On the back foot, 100 Thieves changed their strategy back to what we saw in Game One, with a focus on split pushing. TSM started a second Baron during this time and were easily able to secure it. Although 100 Thieves secured the Infernal Soul, they blundered their tower defense. As a result, they lost their middle Inhibitor and bottom Inhibitor Tower. However, TSM was unable to find a crucial pick, which resulted in them losing the Elder Dragon to 100T after they picked off three of their members. A few minutes later though, Spica was able to get a hero Baron steal, keeping the game on a knife’s edge. Unfortunately, Lost was picked off in the top lane a bit after and caused the game to remain in a stalemate.

At the end of the game, 100 Thieves went for a pick onto PowerOfEvil but TSM was more than ready. They opted into the fight and dominated it, which allowed them to run straight into the 100T base and bring the series to an early match point. 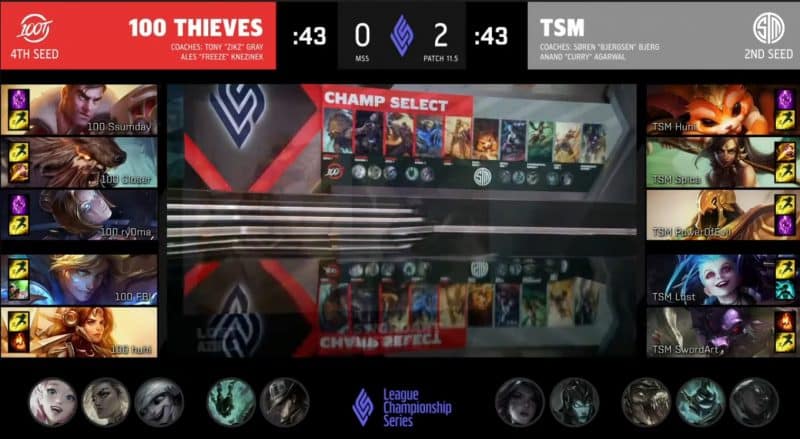 100 Thieves went back to blue side and changed up their draft to try to secure their first win in the series. TSM started the game with a completely different look and was able to pick up First Blood against Ssumday within the first four minutes. 100 Thieves then looked to up the tempo and go for a play in the bot lane, but when that didn’t work, they went for a dive onto PoE and tied the kill count. In response, TSM tried to punish the top lane, but 100 Thieves turned the play right around. At this point, Huni then over-chased and gave 100T another kill, while also giving up a decent shutdown to Ry0ma.

TSM was able to get the first Herald after a smart rotation by the team. With this, TSM released the Herald and got the first turret on top side. On the other side, 100 Thieves were able to get FBI’s Ezreal a large experience and gold advantage while sacrificing top lane. A few minutes later, TSM decided to trade the second dragon of the game for the second Herald. They used this to take down the mid lane turret and put themselves in a slight gold lead.

Shortly after this, both teams traded towers on opposite sides of the map. Meanwhile, 100 Thieves picked up their third uncontested dragon. A team fight broke out a short while later, where 100 Thieves were able to get two kills for one. But TSM managed to pick up the Baron from this, only losing SwordArt in the process. Not wanting to be bested, 100 Thieves claimed the Cloud Soul after a TSM fumble gave away a couple of kills. Somehow, TSM seemed to be unable to get any sort of footing and kept giving kills away to 100 Thieves. Crucially, Ssumday had been split pushing to give 100 Thieves pressure across the map.

Eventually, Both teams postured for a fight at Elder Dragon, resulting in a stalemate. After a small brawl, resulting in everyone returning to their bases, both teams made their way back to Elder. This is where 100 Thieves were finally able to make a decisive play. Securing the Elder buff, they fully engaged onto TSM and obliterated them. With this, 100T made their way into the TSM base and snagged their first win of the series. 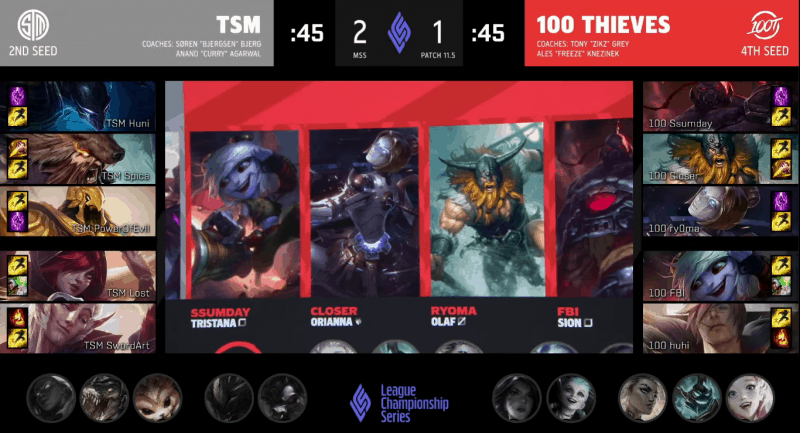 In Game Four, TSM chose to go to blue side to try and close out the series. TSM kicked it off by going for an aggressive play on the bot side. But the play caused the team to overextend and they actually gave up two kills to FBI’s Tristana. The pressure that the early kills caused resulted in 100T picking up the first dragon. However, TSM did crucially take advantage of their top side and punished Ssumday’s Sion to take the first tower of the game. Not too long after the first attempt, TSM again decided to attempt to make a play on to FBI. But it was a disaster, resulting in a landslide team fight win for 100T.

In the following minutes, the teams traded dragon for Herald. The game stalled out for a bit afterward but it felt like 100 Thieves was on the front foot. When 100 Thieves picked up the third Cloud Drake, TSM forced an enormous team fight, that they handily won. It results in four kills and a Baron buff. At 27 mins in, TSM had a 4.8k lead, so they were able to also pick up the second dragon. At this point, 100T started feeling the pressure and breathed a sigh of relief when they found a crucial pick onto Huni.

That relief was short-lived, however. As soon after, TSM found a clean engage in the mid lane and was able to get a clean five-for-zero ace. That last team fight gets TSM a final Nexus kill and a date with Team Liquid for the Lower Bracket finals. TSM looked sloppy at times, but they are able to defeat 100 Thieves in 3-1 fashion in the end. This means we will get to see the rematch between TSM and Team Liquid on Saturday in the Greek Theater in Los Angeles.

How to hunt a chicken😱