Journey Through the Wastes of Hell in Neverwinter: Avernus

The fall of the Vallenhas family and the descent into the realm of fiends was just a taste of the infernal adventure that awaits you in Neverwinter: Avernus. The latest module for heroes of the Forgotten Realms continues the story introduced in Infernal Descent and brings with it a brand new adventure zone, new characters, challenges, and rewards!

The Rage of Bel

The ripple effects of saving the poor souls of Vallenhas brought forth greater foes and introduced Neverwinter’s first episodic content, The Rage of Bel. Breaking the Infernal Citadel’s chains caused the archdevil Zariel to take notice and send her lieutenant, Bel, to destroy any who would stand in her way. Defeating Bel offered a taste of victory, but also paved way to facing the ultimate evil.

In the relative safety of Vallenhas’ Stronghold’s Great Hall, you once again work with Makos and a curious new ally – Lulu the Holyphant. While defeating Bel may have provided some insight into what confronting Zariel will be like, Lulu seeks an alternative: bringing back what was once pure in Zariel and overseeing the redemption of the fallen archangel.

The first layer of the Nine Hells is a desolate wasteland, but there are still those willing to help you. Celestial forces have spent millennia trying to eradicate this bastion of evil and have left their mark. While few in number, they assist in fighting the fiends of this domain.

For assistance of a more practical nature, Makos introduces you to the curious characters of the scrapyards near Fort Knucklebone, where Mad Maggie’s gang of misfits build and repair vehicles of war. With the help of skilled kenku brothers you are provided the use of an Infernal Warmachine. These lumbering metal vehicles provide safety and transportation across the wastelands – and are also pretty useful for running over the denizens of this blasted landscape. Learn how to operate this machine and make sure to turn on the radio as you make your way to Mahadi’s Wandering Emporium!

Confronting an archdevil and wandering through Lulu’s memories to restore them are vital to the new campaign, but adventurer’s seeking treasures and other bounties can find other ways to occupy their time. Several major and minor Heroic Encounters provide group challenges throughout the new adventure zone. These encounters have players facing the various threats of Avernus, both fiendish and mechanical.

In addition, maps provided by a certain cartographer of questionable sanity will have you seeking treasure across the hellish landscape. Dig up new and valuable gear, including weapons used by Avernus’ own Legion Guard!

For those looking to make continued use of the infernal armor obtained defending Vallenhas, you can upgrade this gear in Avernus. Seek evil odds and ends throughout these evil lands to increase your stats and make a choice to inflict greater damage against demons or devils.

Nevewinter: Avernus includes a brand new endgame trial, Zariel’s Challenge, where players must prove their worth to Zariel herself in order to obtain the right to wield her blade. This module also introduces two versions of the Trial, with the traditionally challenging version and the new story-mode event format. The story-mode version will allow players to experience the trial with a focus on the lore and narrative development instead of the fight mechanics and harder combat.

Successfully battling alongside celestials and against the archangel’s corrupted self and inner demons will reward you with the new Celestial weapon set, the Glorious Light artifact set, and (non-chicken) vanity pets.

Continue the infernal journey where devils and demons wage a timeliness Blood War in the war-torn plane of Avernus. Will you stand amidst the clash of lawful devils and chaotic demons? Will you confront Zariel’s rule of this desolate place and help bring redemption to the fallen archangel? Neverwinter: Avernus is now available on Xbox One! 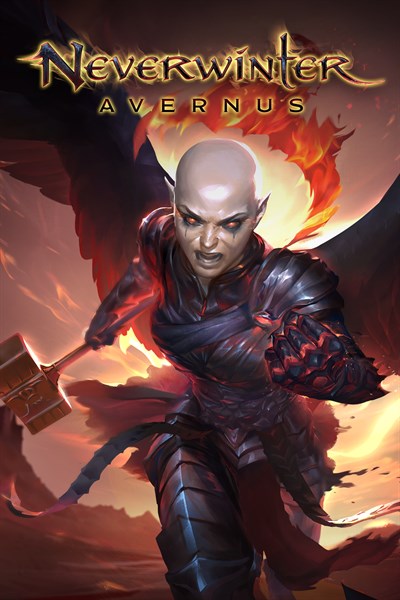 Neverwinter is the premier Dungeons & Dragons MMORPG experience, featuring fast-paced combat and epic dungeons. Explore the vast city of Neverwinter and its surrounding regions, battle its many enemies, and be a part of Forgotten Realms history.

Experience Dungeons & Dragons Like Never Before – Neverwinter is an action MMORPG that bridges intense combat with classic D&D gameplay. Journey through the city of Neverwinter and the legendary subcontinent of Faerûn, and face off against the greatest adversaries from D&D legend.

Build Your Own Legend – Bring your adventures to life through iconic D&D classes and races, advanced paragon paths, companions, and a remarkable range of customization options. Whether you’re hunting dragons and beholders within crumbling dungeons or battling other players in the icy reaches of Icespire Peak, you’ll discover why Neverwinter is the definitive Dungeons & Dragons experience.

Optimized for Xbox One – Neverwinter inspires classic Dungeons & Dragons adventures with a fully optimized player experience for Xbox One. The fast-paced action gameplay of Neverwinter has been mapped to the Xbox One controller, giving adventures the ability to move around the battlefield and cast powerful spells with ease. Xbox One players can also use their Xbox One friends list to find and party up with others as they explore iconic locations of the Dungeons & Dragons universe.