Join the Fight: The Mean Greens – Plastic Warfare is Available Today on Xbox One

Hey there, I’m Jamie the Art Lead and Community Manager from Virtual Basement. I’m excited to announce that The Mean Greens – Plastic Warfare is now available on Xbox One! I’m so proud of the teams at Virtual Basement and Code Headquarters for all the hard work that’s led up to this exciting event.

Xbox players will finally be able to experience our action-packed online third-person shooter. We have been supporting and updating The Mean Greens for almost 5 years now. Over the years the team has been able to make something awesome and unique.

The Mean Greens is a colorful action-packed online third person shooter from the perspective of toy soldiers! Join matches of up to 10 players to jump, shoot, and roll your way into victory. The game features 21 unique map layouts set in 15 locations throughout a full scale home. Fight in low gravity inside of a fish tank or bounce off giant gelatin desserts to attack your enemies from above.

Oh and by the way there’s even a map that lets you play as a toy raptor!

Our goal was to capture the old school action gaming experience. Players start out with a full arsenal of weapons including a rifle, shotgun, sniper rifle, rocket launcher and a grenade! When you use up all the bullets in one weapon, simply switch to another one while the original cools down; this keeps the action going.

It really has been quite an amazing adventure building The Mean Greens over the years, with an incredibly talented and very small team we’ve been able to take a very small idea and make it larger than life. The best part is we’re not even done! Because each map has its own game mode the possibilities are truly endless! We’ve got lots of ideas for new maps and modes that we can add in after launch, and with our new character select system we can add all kinds of new character models to choose from.

We are able to communicate directly with our players and get feedback instantly! Our official Discord channel https://discord.gg/virtualbasement is a great place for us to answer questions or carry on a conversation. We are also very active on Twitter so be sure to give us a follow @VirtualBasement.

I hope you’ve enjoyed this look into The Mean Greens and we look forward to seeing you melt some plastic in game! 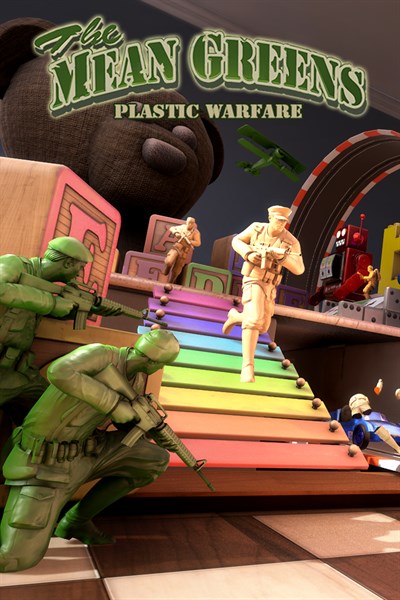 Take part in history’s greatest battle of Green VS. Tan. Fight amongst and against others online. Jump, shoot and roll your way into victory with fast-paced objective-based gameplay. Sometimes the greatest battles are fought by the smallest of soldiers.

The Mean Greens is a 3rd-person shooter played from the perspective of toy army soldiers. Match up with others online for some friendly multiplayer competition. Enjoy a huge battle of up to 10 players in each environmentally unique map.