Available with Xbox Game Pass, Hotshot Racing is the blisteringly fast, arcade racing game from Curve Digital, Sumo Nottingham, and Lucky Mountain games released this past September that takes the iconic arcade racing formula of the 90s and updating it for the modern generation.

Now it’s time to make your gameplay explosive with the Big Boss Bundle! With even more content for all you drift-lovers out there, the new DLC includes four colorful new tracks, a new Grand Prix championship, and a new game mode: Barrel Barrage.

Take Hotshot Racing’s trademark breakneck speed and add explosive barrels to the mix. Launched from the rear of your vehicle, the barrels explode on contact with other racers’ cars, inflicting damage and making each dash for the checkered flag more perilous.

Since launch, Sumo Digital Nottingham and Lucky Mountain Games have pulled out all the stops, addressed your feedback and kept the game up to date with constant patches across all platforms. This includes increased car speed across Normal, Hard and Expert modes, improved multiplayer lobby functionality, controller detection fixes for the PC version of the game and more.

It’s time to get back on the track! 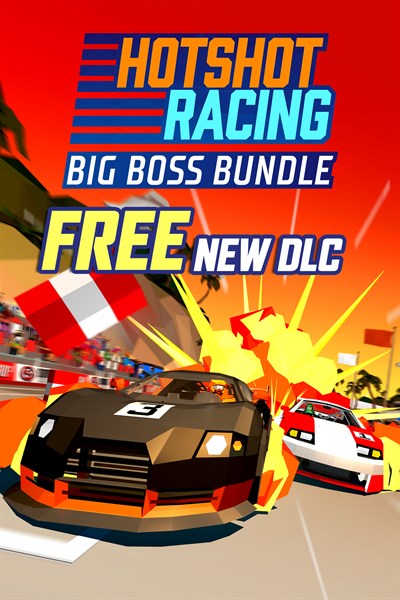 Developed by racing game veterans SUMO Nottingham and Lucky Mountain Games, Hotshot Racing is an all-new driving experience which revives the classic arcade gameplay of the 90s and thrusts it into the modern era.

16 racing circuits provide the twists, turns and straights conducive to searingly quick racing. Take in coastal, jungle, alpine and Las Vegas desert environments, with each course modelled with the most vivid colours and blue skies for miles.

Time Trial and Grand Prix modes cater to those who like to compete in classic racing formats, while ‘Cops and Robbers’ and ‘Drive or Explode’ modes offer exhilarating new ways to play.

Each mode is available in single-player, four-player split-screen and eight-player online, while Time Trial is single-player only. Single-player modes run at a blistering 60FPS to deliver one of the fastest depictions of racing possible.

Smash lap records to rise-up the global online leaderboards or download ghost laps to match your racing lines against the very best.