The Hexgears X-1 was inspired by the Bell X-1 supersonic aircraft, and when you receive a keyboard touted as the desktop equivalent of a groundbreaking supersonic craft it’s difficult not to get a little excited – and also set your expectations very high.

Despite its namesake this keyboard’s design is understated and compact. It’s technically a tenkeyless design, but it’s been so squished and squeezed the end result is no bigger than some fully mechanical compact boards we’ve seen. It’s also exceptionally well put together, too. The smooth, rounded edges on all four corners the only real flourish across the pristine silver CNC-machined aluminium case.

As for connectivity, this board can be both wired via USB Type-C – and there’s a lovely braided cable included in the box – or connected via Bluetooth. Device switching is a high point on the X-1, complete with on-clearly marked and quick to use board shortcuts to shift between devices and USB or Bluetooth connections. Hence the X-1 is a great single solution for multitasking across multiple devices.

The X-1 is also fitted with full-key RGB lighting, to stunning effect, but those RGB LEDs are mighty thirsty and will sap the life out of the battery faster than you can say “it’s not worth it”. With RGB lighting on the battery will last eight hours on a single charge. However, with lighting disabled, you’ll get two weeks of moderate usage out of the board’s 2,400mAh battery before it calls it a day.

At least wired up you can enjoy the pretty lights without any detriment to usability. And overall it’s a rather neat solution, with the on-board memory storing lighting profiles on your behalf so no software is required.

Also folding into the wireless and portable nature of this board is its astonishingly thin and sleek profile, made possible by the Kaihua Choc low-profile mechanical switches under every key cap. These fully-mechanical switches were released back in 2017, some of the first of their kind, and the tactile switches included with our review sample feature a 1.5mm actuation and 3mm total travel.

And so we come across my first, and perhaps only major, gripe with the X-1. I don’t get along with the Choc switches whatsoever. The tactile feedback feels gritty to the touch, for one. But it’s the actuation, or lack thereof, that disagrees with me most of all. I don’t consider myself a particularly light touch when it comes to typing – more or less somewhere in between feather fingers and smashing my keyboard to bits – but even this was not enough force, or accuracy, to register a key press every time.

These switches inconsistencies, combined with wider than usual key caps, makes for a typing experience that can be a mighty dirge. It’s definitely not a keyboard I found conducive to WPM, and it’s also a bit of a stick in the mud when it comes to gaming performance, too. The stodgy feel to the key press would often take me out of the action, and I’d find myself reaching for my full-size Cherry board all too often for some reprieve. 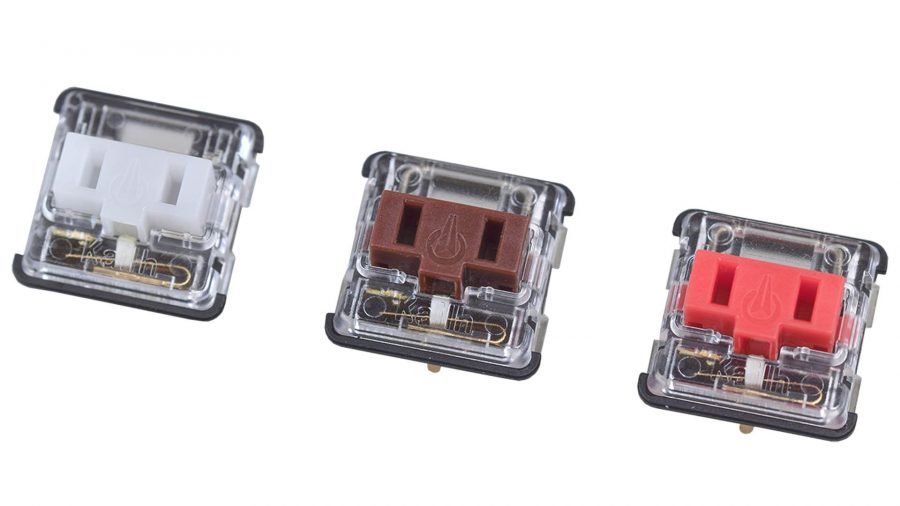 But there is one use that I found this board perfectly suited to, and that’s when I needed a lightweight device to shove into my bag and take away travelling. This is the X-1’s saving grace, because it’s not often you can take a tenkeyless mechanical keyboard in your carry-on. There’s also a great travel case included in the box.

So while I wouldn’t recommend the X-1 as a desktop keyboard, it makes for a fantastic on-the-go companion for work trips as a replacement for dire laptop or tablet keyboards. But is that enough to warrant the Hexgears X-1? At $120, it’s a hard sell. While the board is very well constructed, and looks and feels superb in-hand, it all unravels as soon as you begin to type.

Sadly then, the Hexgears X-1 doesn’t live up to its namesake. But I’m not really sure what connection there ever was between this keyboard and the rocket-propelled Bell X-1 to begin with. Or at least none very apparent to my very limited knowledge of 1940’s aircraft. What I do know, however, is that the Hexgears X-1 isn’t going to become my daily driver anytime soon. Not for a lack of desperately wanting to love it – I really do – but because I simply can’t come to terms with the typing experience it offers.

There’s only so far a keyboard can go without reliable mechanical switches. While the Hexgears X-1 gets a whole lot right, its inconsistency means it’s unable to deliver where it counts.