Star Wars Jedi: Fallen Order draws on a number of sources to produce its unique breed of action. In moments of timing-focused dodges, parries, and varied melee attacks, the most recent God of War comes to mind. As I open shortcuts, respawn enemies after a rest, and retrieve lost XP following a death, Dark Souls is in evidence. And in moments of sliding down ice drifts from which I leap and swing on ropes across deadly gaps, I’m reminded of Uncharted. Chasing too many influences can sometimes tank a game’s potential, leaving everything a half-measure. But that somehow doesn’t happen here, as these and other borrowed ideas ably meld into one, at least in the all too short hours I played a near-final version. That’s because behind all the disparate ideas, Fallen Order nails one central guiding principle; it feels like Star Wars.

My demo drops me in the middle of the game for nearly three hours of exploration and combat. Fallen Order is suffused with the drama of inhabiting a Jedi in the time frame after Episode III. Cal Kestis is a young Jedi living in hiding as he gets targeted by the Empire, and pulled into a plot involving an ancient culture of Force-users called the Zeffo. From the first moments in-game, the visuals and audio nail the vibe of the franchise. The music nods to the classic John Williams score, but charts its own motifs and melodies in a seamless blend. Igniting lightsabers, Imperial blaster fire, and landing ships match familiar sound effect cues. From the beat-up starship Cal flies in, to the ancient ruins of the planet I explore, the world has a lived-in feel reminiscent of the films.

Flying around the galaxy, players have options of what areas to explore and when. As my demo opens, I can pursue the main story thread on Zeffo, or investigate mysteries on the dark landscapes of Dathomir. Wanting to see more of the unfolding narrative, I head to Zeffo and begin to navigate an abandoned village and the expansive underground temple far below.

The droid named BD-1 is your constant companion, but unlike some video game companions, he never gets in the way

Exploration is a big part of the game. Paths through the level at first seem linear, but I can often find shortcuts that connect back to earlier areas, recalling games like Bloodborne. While it’s hard to surmise if it’s indicative of the broader game structure, Zeffo is focused on lengthy stretches of traversal and discovery, punctuated by occasional fights against both Stormtroopers and aggressive local fauna. In one area, I have to Force Slow a spinning fan blade to create a series of platforms to cross. In another, I divert into a darkened cave, and must use my lightsaber as a flashlight. Inside, Cal uses the rare Force ability of Psychometry to sense echoes of events from objects; in this case, I learn of a desperate mother fleeing from some unnamed threat with her child. I also find an expansion for my healing stim capacity, proving the value of investigating off the beaten path.

Combat is fast-paced, with smart defense as the key to success. Reflecting blaster bolts (which is great fun), parrying attacking troopers, and dodging charging creatures all lead to better outcomes than wild button-mashing assaults, but each demands that I observe enemies carefully, and tap the button in the precise window afforded. On standard difficulty, the timing is generous, but when I try combat on higher settings, enemy damage is dramatically amplified, dodge and parry windows are smaller, and death comes much faster. No matter the challenge, animations look great and varied, especially as Cal learns new powers and dashes back and forth across the field of battle.

Those powers unlock using skill points that I spend at meditation spots scattered across the level. Kneel in one of these campfire-esque locations, and the skill tree spreads out in front of Cal, roughly split into the three categories of Force, Lightsaber, and Survival skills. Leaping Slash and Dash Strike are just two of the new moves/button combos I try out on foes, while other skills like Empowered Slow or Superior Blocking have a more indirect effect on battle. At these same meditation points I can rest to regain health and uses of healing from my buddy droid, BD-1, but it also means all the enemies I’ve fought respawn. 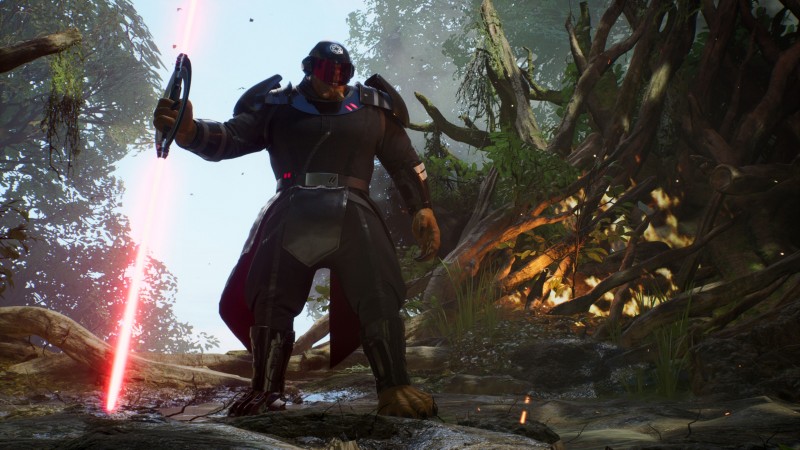 In a separate brief demo, I got a taste of boss combat from later in the game, where the expanded moveset offered a lot of play variety

A significant chunk of my time on Zeffo unfolds deep underground, as I explore a temple from the forgotten race of Force-users and their towering (still active) stone tomb guardians. Within those cavernous walls, I solve an involved puzzle that demands the opening of passages filled with high-powered wind, Force-pushing giant stone spheres, and leaping through an increasingly complex set of traversal challenges. I appreciate the approach to puzzles; I can solve them entirely on my own, but if I’m just not in the mood or get stuck, a button tap calls up a hint from my droid that points me in the right direction.

With secrets I won’t spoil here finally discovered, I make my way back to the surface, and notice along the way how newly acquired Force Push powers have revealed new avenues for exploration; there’s a sense that every planet could offer up new secrets after moving past its main story beats. The ascent also changes up what enemies wait for me, including an exciting combat that sets Jedi against AT-ST Walker. On a broader level, my hours of play manage to walk the challenging design tightrope between skill-oriented battle simulator, story-focused explorer, and occasional set-piece thrill-ride. It’s too brief a time to get a complete sense of the game’s overall quality, but it is certainly enough to say this with confidence: If I was excited about a new Star Wars single-player game before I played, I walked away with far greater confidence that Respawn has captured a very real slice of the magic that defines the beloved series.