Get Ready for Explosive Arcade Racing in Speed 3: Grand Prix

Have you been waiting for a game that transforms the world’s most popular motorsport into an accessible racing experience? We’re happy to introduce Speed 3: Grand Prix – an all-new action-packed and adrenaline-fueled arcade racing game – available now for Xbox One!

Open-wheel racing for everyone

The popularity of motorsport world championships, such as Formula 1 and IndyCar, is growing more than ever before. There are however not many games that make these racing experiences accessible for everyone. We believe that many are too complex or need an elaborate tutorial before you can just jump right in and start racing. With Speed 3: Grand Prix we wanted to do it differently, and create an open-wheel racing game that can be played and enjoyed by open-wheel racing fans of all kinds and ages.

Speed 3: Grand Prix is developed in the spirit of old-school classics like Pole Position, that are all about pure and simply brilliant arcade fun. Of course, we enriched it with high-quality visuals to make it align with the modern day standards in video gaming. Additionally, we gave it an extra edge: the element of danger. Drive recklessly to take down your opponents and claim the top position. However, watch out: before you know so, you’ll be the one ending up in an explosive crash.

Lead the pack all around the world

Speed 3: Grand Prix challenges players to get on the circuit and become the best driver of all time. Pick your favorite car, unleash it’s horsepower and make your way towards the first spot in all seasons. Go all around the world to master various circuits. Race through the American wastelands, tear up the asphalt of the German circuit, compete in the British countryside and drift through the neon-filled streets of Tokyo. No matter where you are, it’s your challenge to rise to the top of the season.

Take it up against the competition in split-screen multiplayer

We believe that gaming is always more fun when doing so together – especially when you can do so together on your own couch! That’s why we always make multiplayer one of our big priorities. In Speed 3: Grand Prix you’ll be able to race against your friends or family at home. Start up the split-screen multiplayer and find out who is the true champion.

Get on the tracks of Speed 3: Grand Prix!

Become a true motorsport legend and get on the circuit as Speed 3: Grand Prix is available now on Xbox One. Get it today on the Microsoft Store for Xbox. 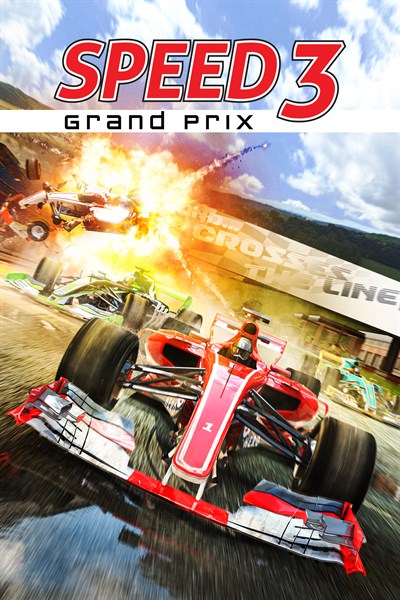 EXPLOSIVE AND HIGH-SPEED ARCADE TRACK RACING FOR EVERYONE

Get on the circuit and show that you’re the best driver of all time! Pick your favorite formula racing car and make your way to the first spot in all seasons to claim the championship title. Drive recklessly to take down the competition and let them all bite your dust!

LEAD THE PACK ALL AROUND THE WORLD

Make them all know you’re the one leading the pack. Fuel the rivalry as you take it up against others to conquer the world of circuit racing. Race through the American wastelands, tear up the asphalt of the German circuit, compete in the British countryside and drift through the neon-filled streets of Tokyo!

It’s up to you to become a true motorsport legend!

FEATURES:
• Adrenaline-fueled and intense high-speed arcade circuit racing!
• Take down the competition with explosive and spectacular style!
• Rank at the top of each season to establish your reputation as the world’s greatest driver.
• Intuitively easy and accessible car handling, designed for players of all ages and kinds.
• Manage your car damage, as before you know it: you’ll be burning more than just rubber.
• Go on a world tour around the best tracks the world has to offer, experiencing various weather effects, all brought to you in top visual quality!
• Play together in split-screen local multiplayer and show them who’s the best, as you challenge anyone!
• Keep improving your driving skills in the addictive Time Trial Mode!
• Challenge your personal records and achieve new all-time high scores on each track!

Warning: Speed 3: Grand Prix is not a simulation racing game. Instead, it transforms the world’s most popular motorsport into an accessible and uncomplicated fun track racing experience for everyone.