Ninja Battles resumed after a two-month hiatus due to the tournament creator parting ways with Mixer.

In May, popular streamer and all-around video game personality Tyler “Ninja” Blevins announced a multi-week Fortnite tournament series. Dubbed Ninja Battles, the tournament invited both content creators and professional players to compose a team of three to compete for $80K USD per week. After two weeks of competition, Ninja Battles went on hiatus due to the recent shutdown of Microsoft’s Mixer streaming platform. Two months later, Ninja Battles returned with the third week of competition worth another $80K USD to invited participants.

The outstanding trio of TSM Khanada, BBG Bucke, and BBG Kreo clutched the tournament’s final match, which crowned them the champions of Ninja Battles week three. These three players earned 55 points across five games, continuing their consistent trio play in Chapter 2 – Season 3. Their successful effort in week three marks the second tournament victory for Khanada, Kreo and Bucke after winning the EmadGG Cup back in July. Additionally, these three have achieved six top-ten finishes in Trio Cash Cups. Khanada, Kreo and Bucke collected $25K USD as a result of their victory.

Liquid Riversan, SEN Zyfa and nosh finished just one point out of first place with 54 overall. They earned $15K USD for finishing in second place. Rounding out the top three was the newly formed trio of Reverse2k, mero and Pure Deyy. This trio won the first match of the tournament and finished with 53 points. Their consistency yielded $10K USD in winnings. The complete top 15 placements are below: 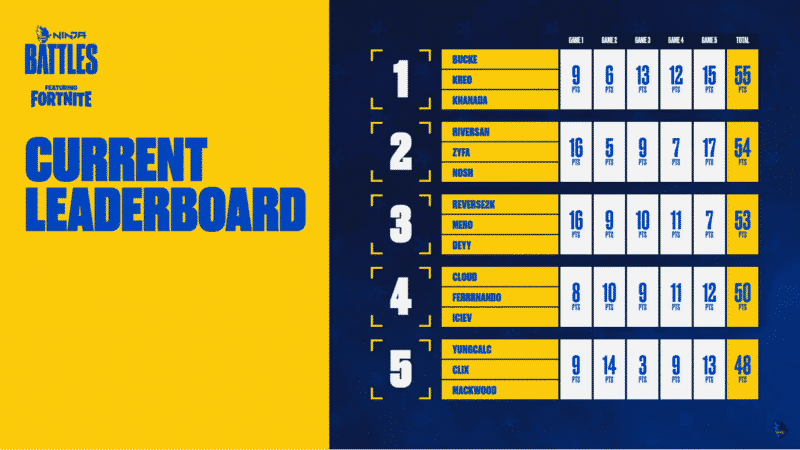 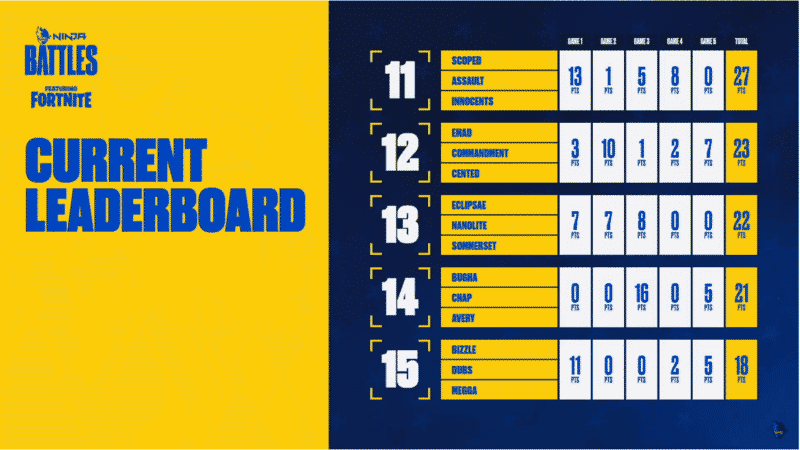 Setting the Bar for Chapter 2 – Season 4

With only two weeks remaining in Chapter 2 – Season 3, the Ninja Battles tournament series is readying the top trios for what’s ahead. Next season’s FNCS will feature a trios format, and we are beginning to understand how the landscape will look. Khanada, Kreo and Bucke have been arguably the best trio thus far outside of TSM Saf, NRG Zayt and Liquid STRETCH. The latter surged late in week three of Ninja Battles, but it simply was not enough. Although Ninja has not announced the schedule yet, we can expect Ninja Battles to continue next week.

Stay tuned to ESTNN for coverage of the FNCS Finals this weekend and all things Fortnite!

Fortnite For Android Has Been Pulled From The Google Play Store

Fortnite For Android Has Been Pulled From The Google Play Store