LG has added more talent to their organization’s growing roster.

Luminosity Gaming sent shockwaves through the competitive Fortnite community yesterday, with a wave of new players joining the team. Jared “Eclipsae” Elwood, Slackes, Keys and Jamper Have signed with the organization and will represent the LG banner in future competitions. All four of these NA East standouts have seen their fair share of success in Fortnite Chapter 2, including multiple FNCS appearances.

We’ve got a TON of Fortnite wins in the future with these new additions to the #LGLOYAL fam. ????

The Canadian-based esports organization had been teasing some new talent acquisitions over the past few weeks. LG’s announcement came in the form of a hype trailer, claiming their four new professional players as “The Future of Fortnite.” Toss popular Twitch streamer Sommerset and and YouTube streamer Muselk into the fold and you have quite the revelation in the Fortnite community.

Slackes, Keys, Jamper, Eclipsae and Sommerset join Australian Fortnite sensation Harley “Fresh” Campbell and Fortnite veteran Michael “Hogman” Hogman on what is rapidly becoming a formidable mixture of pro players and content creators. Luminosity also teased some more announcements coming soon as well. However, it is not clear whether they have signed more Fortnite players or not.

Turn our tweet notifications on to be the FIRST to know. ????#LGLOYAL

These four players all have some exceptional accomplishments. Jamper has qualified for three straight FNCS Finals. However, his most impressive result took place in Chapter 2 – Season 2. He and duo partner paper reach the Grand Finals, managing a sixth-place finish. Jamper walked away with $8K USD as a result. He recently has been competing alongside Fortnite World Cup Champion and Avery as a trio.

Fortnite World Cup Finalist Eclipsae has made quite the name for himself in just a year. Not only did he finish in 34th place at the World Cup, but he went on to qualify for three out of four FNCS Finals. His best result came back in Chapter 2 – Season 1 alongside FaZe Clan’s Megga, Dubs and Bizzle. Eclipsae also just recently took second place in the EmadGG trio tournament. 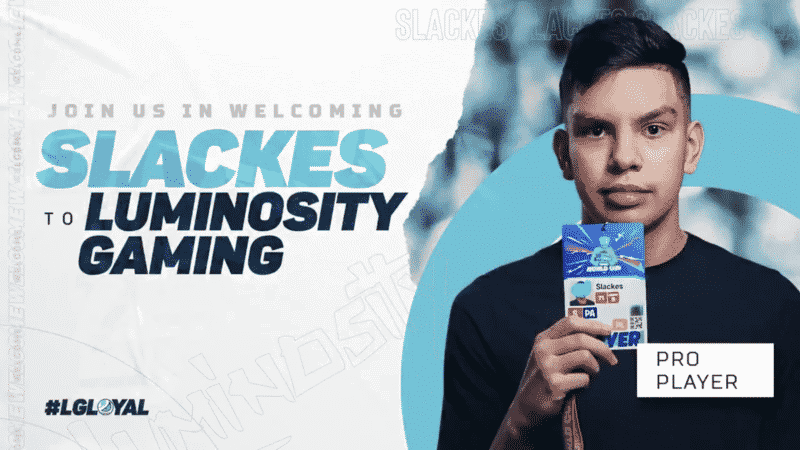 Slackes and Keys are a duo that dates back to the Fortnite World Cup just over a year ago. The two qualified as a tandem, landing in 15th place and taking home $100K USD. The two split briefly beginning in Season X before continuing their dominant duo play in Chapter 2 – Season 2. Both Slackes and Keys would eventually find the sideline after Epic Games banned them for collusion. Talent, however, has never been a question for these two, with multiple impressive finishes under their belts.

The growth of LG Fortnite

Luminosity Gaming continues to grow its Fortnite presence. Now, with a whopping seven North American players on their roster and one European, LG seems committed to Fortnite. There are rumblings of even more signings coming down the pike as well. We will have to wait and see what materializes in the future. For now, adding four exceptional young talents is a good investment.