The Fortnite Champion Series (FNCS) Season 6 Semi-Finals is only three days away and the stakes could not be higher. Epic Games provided a $3M USD prize pool this season, which the developers spread out across Fortnite’s seven server regions based on participation. Additionally, the elusive Axe of Champions and bragging rights are also on the line.

While there are hundreds of thousands of competitors worldwide, Europe is the gold standard in competitive Fortnite Battle Royale, featuring some of the best players and the most robust prize pools. The depth of Europe’s player base and the talent pool is endless, but only 99 teams earned the right to compete in the FNCS Season 6 Semi-Finals.

Those 99 teams separated into three heats based on their Series Point accumulation. Six games per heat will determine which trios will move into the Season 6 Finals. The top six teams will qualify for the finals, and the others must either compete in the Reboot Round or head home, depending on their final placement. Today, we will dig deep into each European heat and isolate the teams that viewers should look out for throughout the weekend.

The first of three stacked heats features a ton of European talents and many contested drop spots. In general, teams who have to fight off the spawn are in a much worse position than those with uncontested locations. For that reason, IDrop, k1nzell and wak1e stand out as one of the favorites to advance out of Heat A.

They’ll have Holly Hedges to themselves with Storm Surge damage options south and east. It’s hard to envision a scenario where IDrop, k1nzell and wak1e aren’t atop the leaderboard outside of zone luck.

AstroSMZ, Hardfind and Adn is another trio worth considering since they will have Slurpy Swamp alone. That location guarantees maximum shield and fishing spots. Combine those three factors with their veteran presence, and we should see this combination of players advance.

It’s challenging to discuss Heat A without mentioning last season’s fourth-place finishers — MCES Andilex, MCES xsweeze and Grizi Snayzy. This trio has proved time and time again that they can hang with the best players in the world. The all-French squad performed well in the qualifiers with results of fifth and seventh.

Unfortunately, they failed to secure a top-three finish, meaning they will have to endure the FNCS Semi-Finals. Andilex, xsweeze and Snayzy should expect company through all six matches, which could pose a problem if they hope to qualify for the Season 6 Finals. 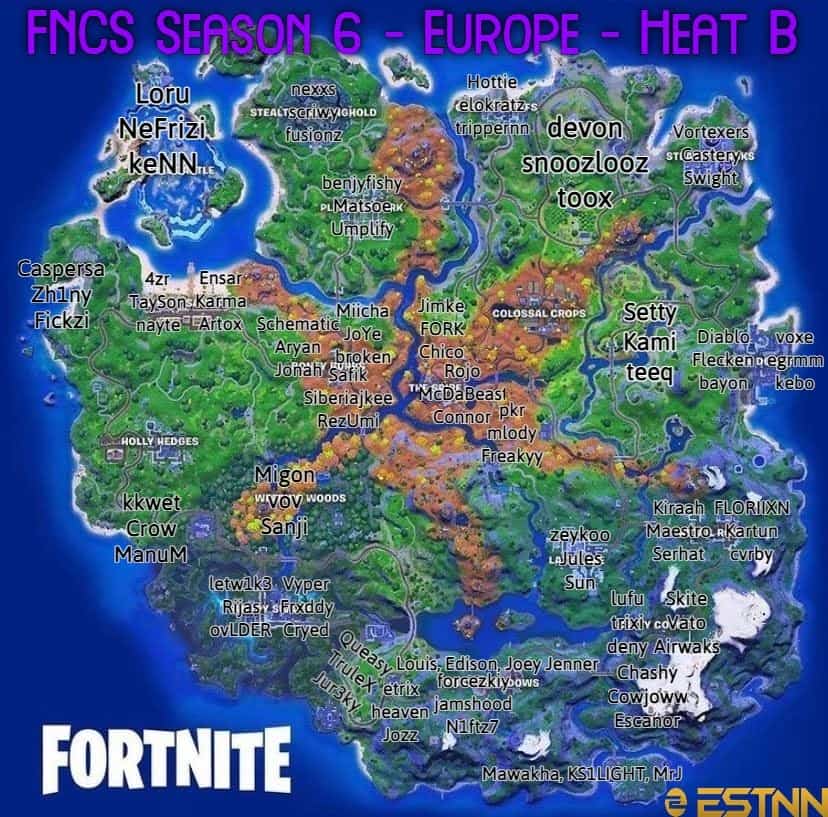 Their last two Season 6 Qualifiers included a sixth and fifth-place finish, showing the consistency that fans have come to expect. They’ll be landing at the patented Kami split, located west of Dirty Docks, which provides various loot and upgrade options. Storm Surge should not be a concern with two teams fighting each other at Dirty Docks.

Team number two includes the talents of NRG benjyfishy, TrainH Matsoe and TrainH Umplify. These three players joined forces in Season 5, where they churned out a fifth-place finish in the finals. Recent weeks have not been ideal for Matsoe, Amplify and benjyfishy, who have spent a lot of time trying to alpha Pleasant Park — their chosen point of interest.

Fortunately, the heat map indicates an uncontested Pleasant Park for Benjy, Matsoe and Umplify. If that holds, these three should coast into the Season 6 Finals.

Heat B also includes drop spot drama in many different locations, including Boney Burbs, Sweaty Sands, Catty Corner and Misty Meadows. These teams can only hope that the 50/50 fights lean in their favor. While GUILD TaySon, Grizi 4zr and nayte are favorites in this heat, they’ll need to best Ensar, Karma and Artox consistently to crack the top six. 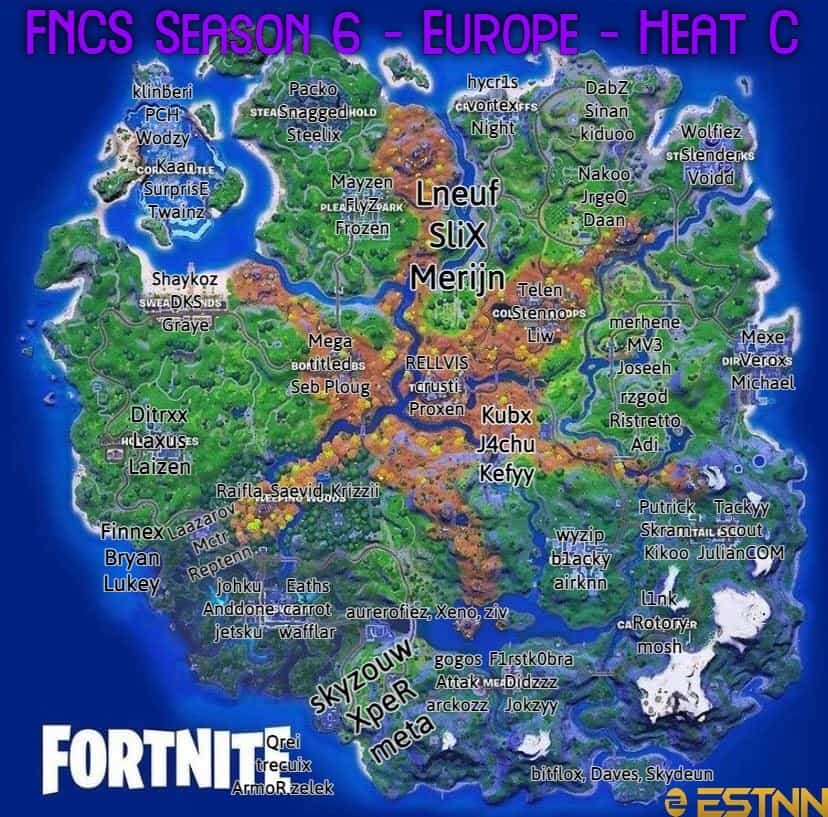 XL Wolfiez, LootBoy Slender and ALOFT Voidd are the frontrunners of Heat C by quite a wide margin. This trio formed ahead of week one and began the Fortnite Champion Series with a 15th place finish in Qualifier 1. Wolfiez, Slender and Voidd have since placed fourth, sixth and second in their last three events. They will land at Steamy Stacks and should have little trouble qualifying.

Veterans LootBoy Mexe, Verox and Michael are uncontested at Dirty Docks, their chosen destination since the Frosty Frenzy in December 2020. These three players have five months under their belt, including a 9th in the Season 5 Finals and two top tens in the first two Season 6 Qualifiers.

Dirty Docks affords plenty of loot and mechanical parts. While Storm Surge could be problematic, Mexe, Verox and Michael are knowledgeable players and have all the tools they need to win Heat C. The zone will undoubtedly need to pull in their favor.

Shaykoz, MCES DKS and GO Graye have performed well in the last two qualifiers and roll into the FNCS Semi-Finals with Sweaty Sands uncontested. That means they will have numerous fishing spots, chests and materials to carry them to the end game.

It’s also worth noting that Shaykoz, DKS and Graye could venture west and upgrade their weapons with the “Reaper” NPC. Those many factors combined with their Series Point accumulation make these three players stand out amongst the pack.

The European region always brings effort and high-level gameplay. That sentiment should not change in the FNCS Semi-Finals as teams look to punch their ticket to the Season 6 Finals.