The Fortnite Champion Series (FNCS) in Chapter 2 – Season 5 sports a $3M USD prize pool and the elusive in-game Axe of Champions. The tournament is open to seven regions – Europe, NA East, NA West, Brazil, Oceania, Asia and the Middle East – where teams of three are competing to lay a claim on their respective territory. Trios must first qualify for the FNCS Semi-Finals through either a top ten qualifier finish or by accumulating enough series points. Seventy more teams secured their position in stage two of the competition after three days and 12 total gameplay hours.

Records were broken and previously unknown trios burst themselves into the limelight on Fortnite’s biggest stage. Let’s take a look at which teams are moving on to the FNCS Semi-Finals.

The Euros brought the heat in week two of FNCS Chapter – Season 5, which saw all top four teams separated by only a few points. In the end, TrainH Skite, TrainH Falconly and Grizi Robabz did enough to win the second qualifier. These three Frenchmen put forth 138 points, with one Victory Royale and 27 eliminations collectively. Five of their six matches resulted in a top-ten finish, which speaks to the importance of consistency in competitive Fortnite. Skite, Falconry and Robabz will now have a week off before the FNCS Semi-Finals.

After several weeks of trio struggles, top player NRG benjyfishy meshed well with TrainHard eSport members Matsoe and Umplify. Thus far, Benjy, Matsoe and Umplify took fifth in the Sypher PK Cup and followed that up with a second-place finish in the second FNCS Chapter 2 – Season 5 qualifier. In their first major event, Benjy, Matsoe and Umplify earned 135 points in total, including 28 eliminations and two Victory Royales. CL Safik, VP Siberiajkee and CL iRezUmi rounded out the top three with 132 points. The top ten teams from week two will join those who qualified last week in the FNCS Semi-Finals. 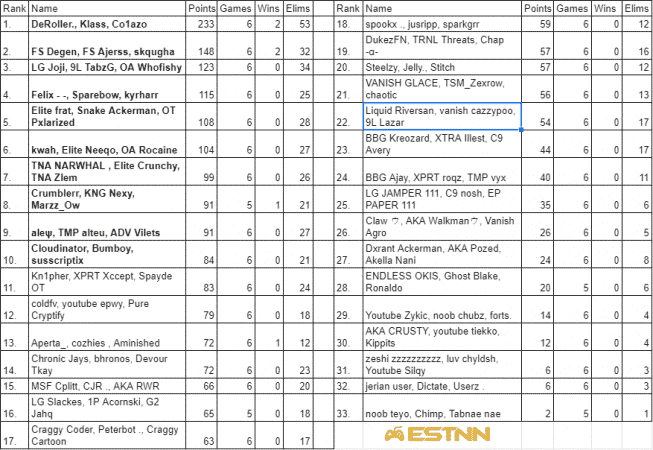 DeRoller, Klass and Co1azo dismantled the competition in the NA East week two finals. These three managed a record-breaking 233 points across the last six games, combining for 53 eliminations and two Victory Royales en route to their victory. It was one of the most impressive performances ever in a Fortnite Champion Series event. After failing to place in the top ten in week one, Co1azo and company streamed their entire journey to the top of NA East.

Another top trio — FS Degen, FS Ajerss and skqttles — took second place with 148 points. Although they were far off of first, the three players combined for two Victory Royales. LG Joji, OA Whofishy and TabzG finished in third after accumulating 123 points. All top ten trios will see action in the next few weeks. Several key teams have yet to guarantee their spot, so the final week has an extra sense of urgency. 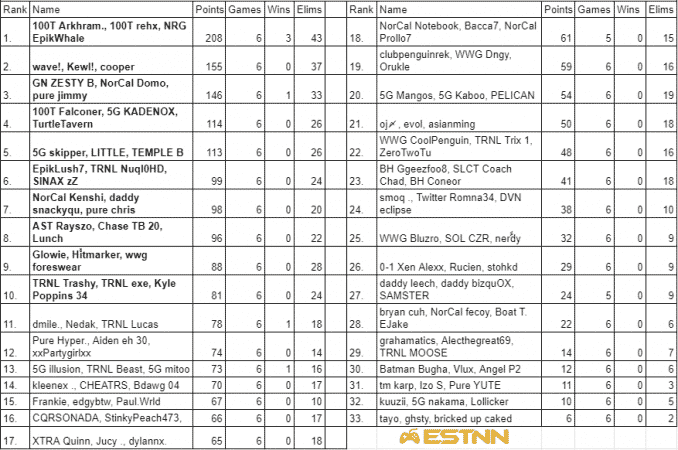 FNCS Chapter 2 – Season 4 winners — Arkhram, EpikWhale and rehx — showed no mercy in the week two NA West finals. It was a bloodbath for the 32 other teams, who could only watch as the “Best of the West” compiled 208 points, with 43 eliminations and three Victory Royales over the last six matches. All three players did their part, which led to a performance that echoed what Co1azo, DeRoller and Klass put together in the NA East region. It came as no surprise to see Arkhram, EpikWhale and rehx bounce back from a rough outing last week.

The trio of wave, Kewl and cooper came closer than any others to the Chapter 2 – Season 5 Champions. They managed 155 points overall to secure themselves a spot in the FNCS Semi-Finals. GN ZESTY B, NorCal Domo and pure jimmy rounded out the top-three with 146 points. However, no team could match the clinic that came out of the defending champs. 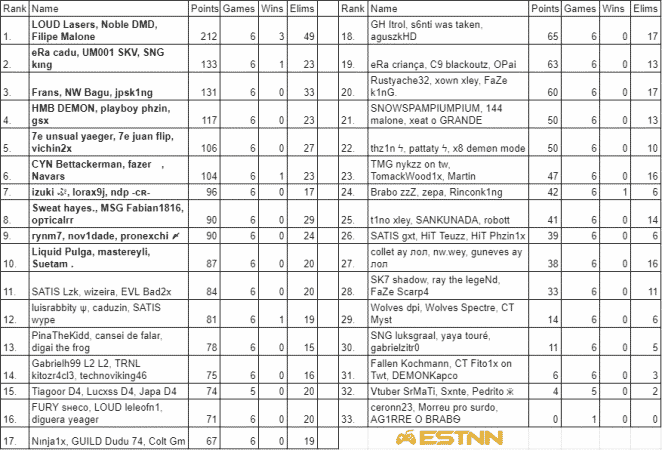 The Brazil/South American region saw one of the most dominant efforts across any of the seven in play this week. LOUD Lasers, Noble DMD and Filipe Malone amassed a whopping 212 points across the final six matches. They combined for 49 eliminations and an outstanding three Victory Royales, despite squaring off against some formidable opponents. All three players are safely through to the next round of the FNCS. Fortnite World Cup phenom FaZe k1ng and teammates xOwN and Rustyk finished in 20th, earning some much-needed series points. 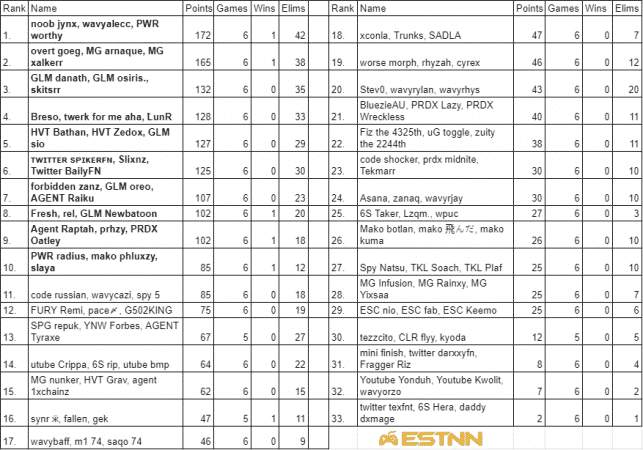 The OCE Grand Finals featured many of the region’s best players, including last season’s trio winners — Jynx, worthy and alecc — who happened to finish week two in first-place. These three are one of only a few teams that remained together after last season, and this win provides validation for how much they have adapted. Jynx, worthy and alecc combined for 42 eliminations and one Victory Royale, which was good enough for 172 points. Overt goeg, MG arnaque and MG xalkerr were the only other trio to eclipse 160 points, and they finished in second place. 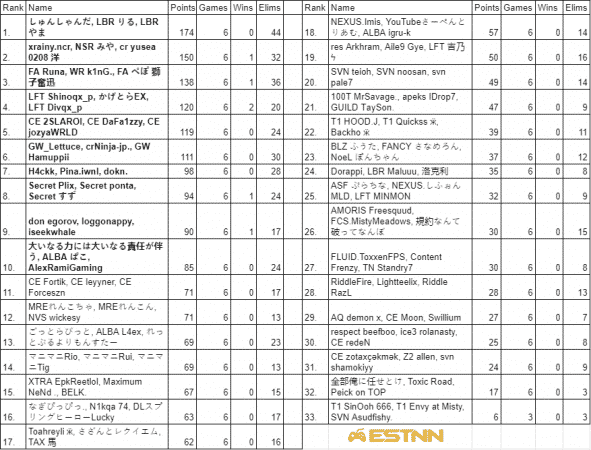 Shunshan, Riruru and Yama claimed first in week two for the Asia region. These three performed remarkably better than the other 32 finalists, managing 44 eliminations and placing no lower than 15th in six matches. They combined for 174 points and will move into heat play. Miya, xrainey.ncr and yusea took second place with 150 points and one Victory Royale. 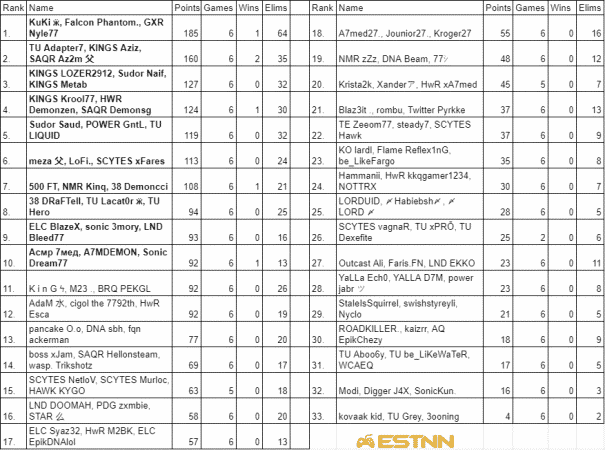 Week two winners — KuKi, Phantom and Nyle77 — amassed 64 eliminations, which is more than any other region. They also managed one Victory Royale, totaling 185 points overall after six matches in the Grand Finals. It was a monumental display that pushed Kuki, Phantom and Nyle into the Middle East FNCS Semi-Finals. The other nine teams inside the top ten will also be joining them and last week’s qualifiers.

That concludes our coverage of the second FNCS Chapter 2 – Season 5 Qualifiers. Next week, 70 more teams will punch their ticket to the FNCS Semi-Finals, which will happen sometime in March. Stay tuned to ESTNN for more Fortnite news and updates!